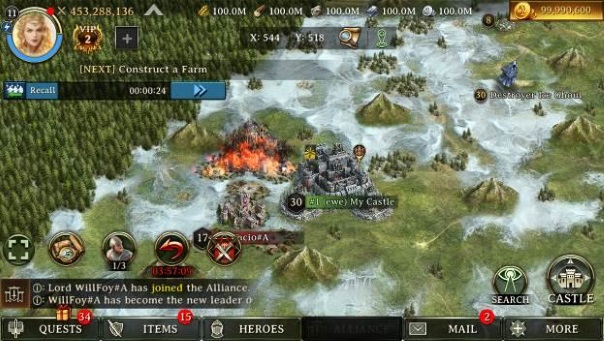 Two new features arrived on Netmarble’s Iron Throne today that expand Alliance/Kingdom Battles. The Alliance Deathmatch Tournament will have 128 teams duking it out and face off in a tournament to determine the most strategic and powerful Alliance. The tournament will be open every four weeks, and take two weeks to complete and will have seven rounds where each team will battle it out three times against the opposing alliance.  To advance to the next round, teams must win first two matches every round. For rewards, winners of each round acquire Alliance Gold for their advancement and Revive Herb and Tournament Chest containing equipment materials are given for each matches.

The Kingdom Invasion system will also receive “Kingdom Invasion Teleport”, kings and their royal guards can invade other kingdoms. 13 scrolls of Kingdom Invasion Teleport are given to each alliance leaders who win capital wars after this update, and they can use them for themselves but can also hand-off the privilege to their royal guards in order to strategically attack other kingdoms. Kingdom Invasion Teleport can be used three times during a weekend at specific times and invaders can stay in an enemy kingdom for up to four hours at a time. Once invaders infiltrate, a notification is sent to all players within the kingdom to spur massive cooperative battles where players will be required to defend their kingdom and their king. Finally, lords with golden castles over citadel level 25 can purchase new skins with gold and apply sharp new looks to their castle.