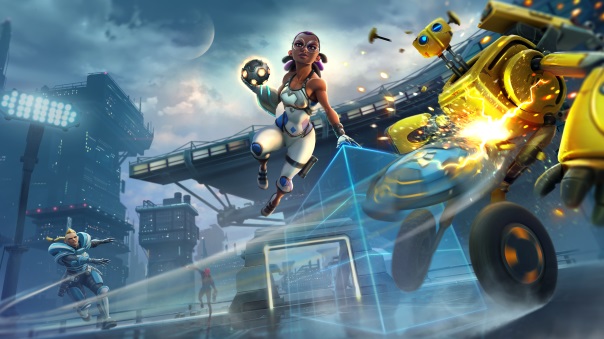 Editor’s Note: Steel Circus is still in Alpha, so this is not a review.

Though I was never really big on sports games, “combat sports” games are a different beast altogether. As a younger man, I used to play a lot of Mutant League on my friends SEGA Genesis. Then at home, I had Base Wars, the robot-combat-baseball game. Today we’re looking at Steel Circus, a 3v3 sports combat arena game. It reminds me of both rugby and soccer. On paper, it’s very interesting. Some of the issues I have with it I’m sure will be addressed as things go on, because it’s important to note that Steel Circus was holding an Alpha Test this weekend, not a Beta/Early Access test. So I state again, this is not a review, just some thoughts on what I liked and did not like. In Steel Circus, teams of 3 do battle in 5-minute matches to see who gets the most goals by the end. I assume it’s only a 5-minute match because not a single match I played made it to the end. 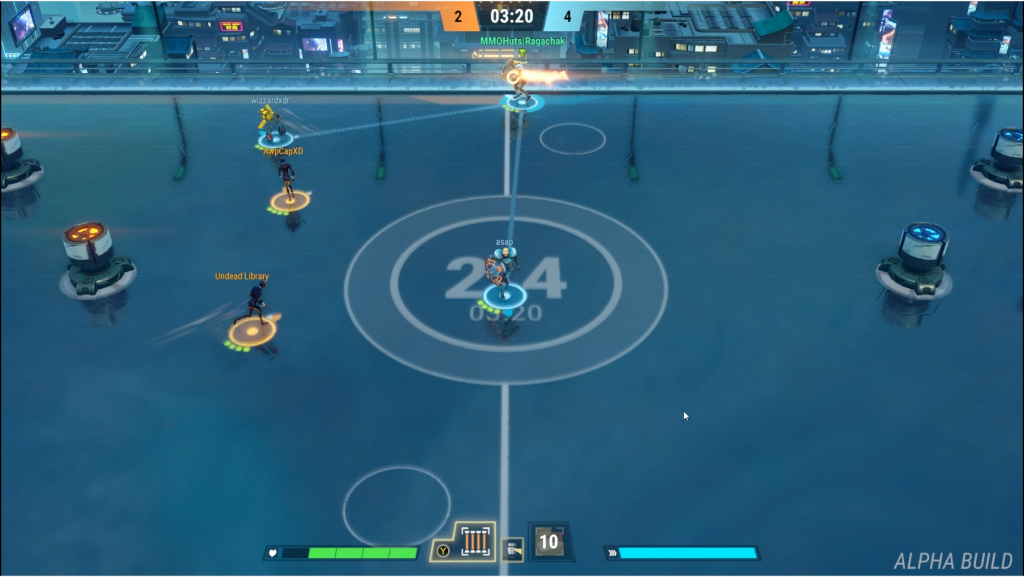 Steel Circus is a cool concept, but it's off to a rocky start. But that's the nature of development.

I had one of two issues completing a match in Steel Circus, but this is not an indictment of the game itself. In the majority of matches, someone would not be able to connect and I went right back to waiting. Then, we’d get into the match, finally. One team or another would get a 5-10 point lead, and the game would simply end. If there aren’t enough players in the match, it just ends. This is the part I assume will be addressed because players simply being able to dodge competitive matches they’re losing without consequence would be a travesty. At the end of the day, I think this is just a symptom of it being in the development phase and people dipping out to avoid the shame of defeat. This also happened in a match where my team was down 8 points, and one-by-one my team started disappearing.

Now that the major technical portion of this chat has been squared away, let’s talk about the actual meat and potatoes. This is essentially a soccer or rugby match with MOBA-style heroes. Each character has a role – Enforcer, Specialist, Striker – and a pair of abilities. The cooldowns on these are pretty long and can be seen in the bottom-middle of the screen, between your HP bar and Dash Meter. This just means you have to be careful with them, but I hope the cooldowns are lowered just a little bit. This would make the game feel a little more intense and less “soccer, but in the future”. The ball will spawn in the center, and players can run into it to claim it. They recommend playing with a controller and I definitely agree. The button layout is very simple, too. All four shoulder buttons are your dash. So pick one you’re comfortable with. You have your skills bound to Triangle/Y and Circle/A. Throwing the Ball is X/A, and Tackle/Dodge is Square/X. It’s also important to note that you can dodge opponents trying to tackle you while holding the ball. I learned this far too late because I didn’t read the tooltip. 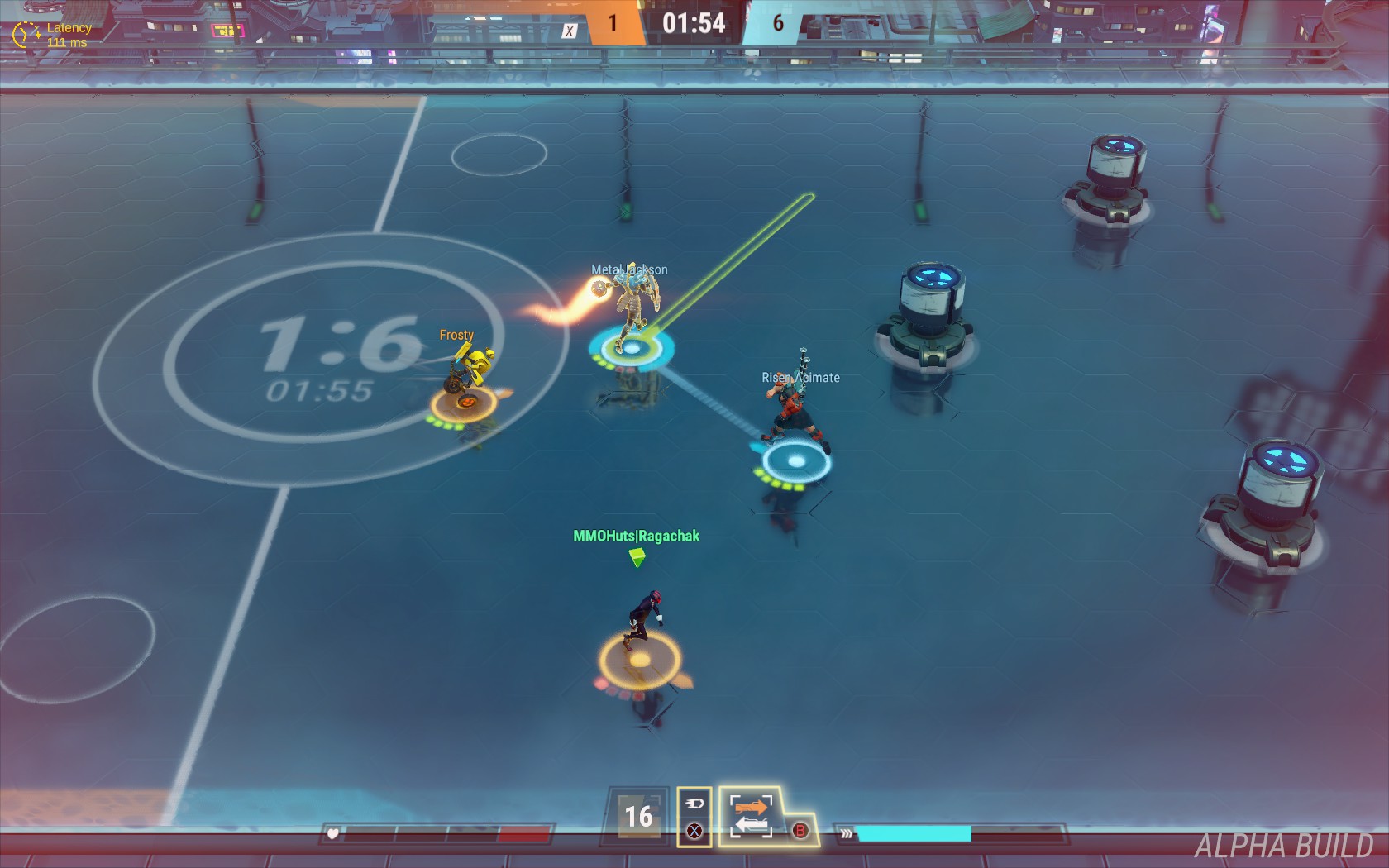 YEAH. SHOOT THE BALL INTO THE HOLE! NET! WHATEVER!

Though this is Soccer/Rugby, you do not have a dedicated goalie. All three players start towards the center position, so it’s up to you to run back and defend whenever an opponent is coming to score. I like this concept, but it wound up just having opponents run into your goal and just hitting square to dump it in for a free point. You also have these huge pinball bumpers near both goals for doing trick shots, and some manner of defense against long-fired shots. There are no out-of-bounds, so feel free to blast the ball against the walls of the arena to try for trick shots too. Most of my team’s goals came from smart passing and shooting/dropping the ball in the net. You can see which of your teammates is closest to pass to by a blue line that links the two of you. This pass can be intercepted, so be aware of that. I’ve also noticed that Elika (Enforcer) is probably the strongest of the characters thus far. She can stun and throw her shield, and any character that can drop a stun can really be a force in Steel Circus.

Off To A Good Start:

I found it interesting that the characters have a health bar, but it wasn’t clear what happened when it ran out, because players did not deal enough damage to me in my matches (or to anyone for that matter) to wear it down to 0. I also feel like the ball does not have a ton of momentum behind it. Quite a few shots towards the goal from center field would peter out and just stop, so everyone had to sprint over and try to claim it desperately. While that’s funny to watch, it slows down the action just a bit. I’m torn about how I feel about “no goalie” because it made some of these five-minute matches feel like thirty minutes with the scores being so lopsided. I think teamwork and communication would have made these more competitive, though. I like where it’s going, but it’s still got a ways to go. 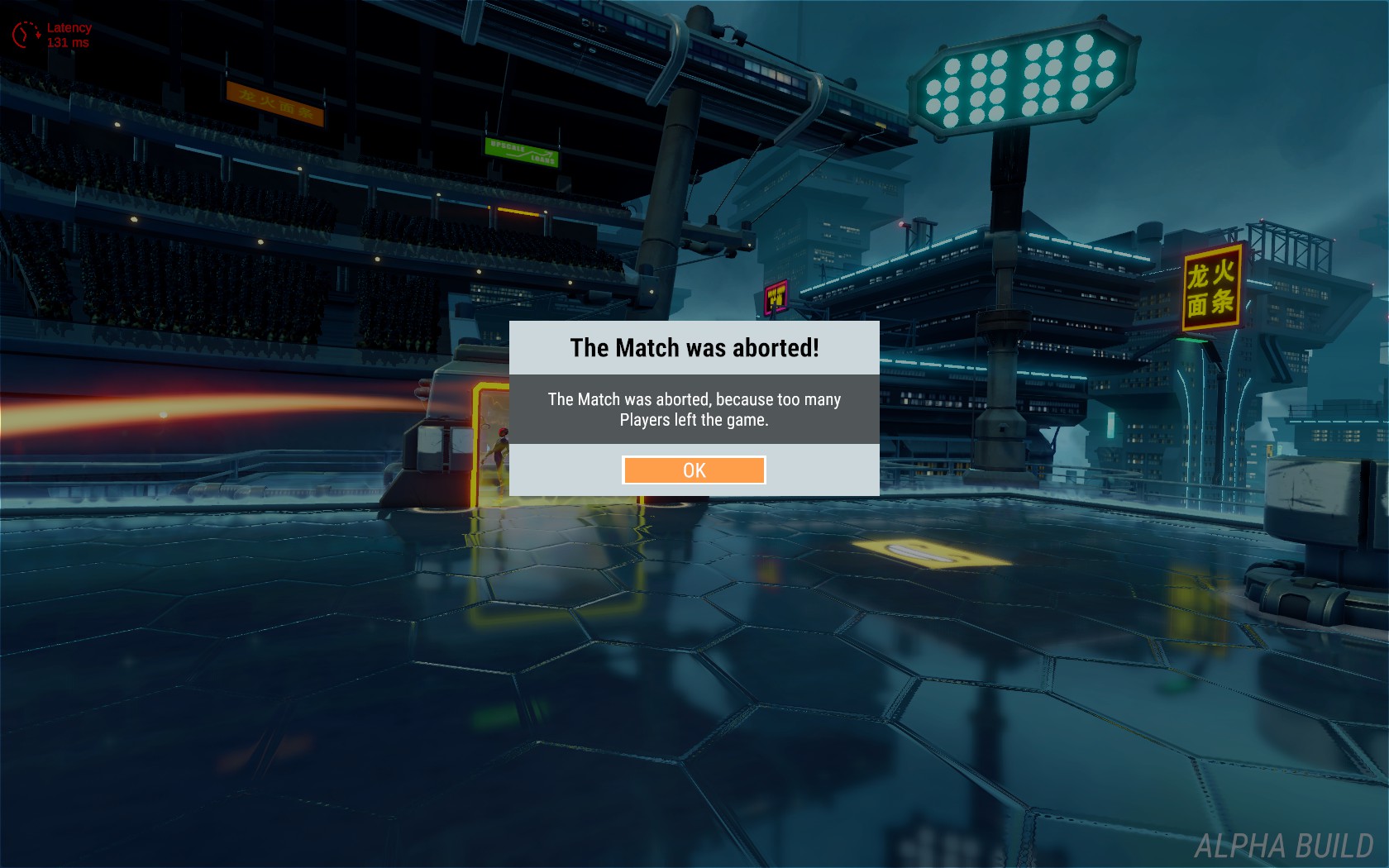 I'm pretty disappointed in people who give up when they're losing. This is still in Alpha, nobody cares about your Win-Loss ratio.

I think the ball could use a little more momentum, and make it clearer what happens when you run out of HP. This is a game that might do well with a brief tutorial for things like that. But this game is fast-paced, and it is a lot of fun when things are happening. I’m curious if it’s going to be free-to-play, and if they’re going to monetize cosmetics, because I think that would be a pretty sound way to go. Too many games in this genre that are sincerely fun go retail and I think that scares people off. I can only imagine there will be more characters in the three roles, and more arenas in the future. That leads me to wonder if each arena will have bumper placements in different spots, or if each arena would have different traps? Pitfalls? Bouncy walls? Bumpers that pop up and down? There’s a lot of potential for some truly wacky/challenging stuff. The game engine feels good, the characters function well, and I like that tackling into players steals the ball. I think the UI just needs a little more clarity and once this game has moved beyond the Alpha state, I’d be interested in looking at it again to see a more stable version of the game. I do think it’s worth keeping your eyes on. Steel Circus is certainly a fun concept and is a rare moment in time that I enjoyed playing soccer.