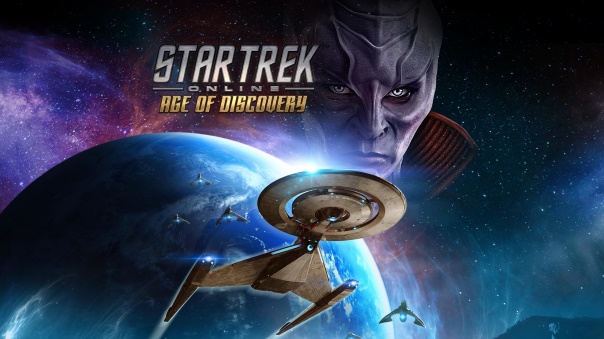 I got into Star Trek Online terribly late, so there was a Hell of a lot to learn. I am a mediocre Starship captain at best, but I honestly have so much fun playing the episodes of Star Trek Online. There are a lot of fascinating parts about the Age of Discovery update. Perhaps the most interesting is that it is the first time Star Trek Online has had a storyline that was a part of an on-going and currently-running series. Sure, Star Trek: The Next Generation had Super Nintendo games when it was still airing, but this is an MMO with thousands upon thousands playing actively, able to play a story that is presently unfolding before our eyes. That’s incredible, and something I certainly wanted as a kid. Players can access this new content by making a new character in the “Discovery-era” Federation or by simply logging onto their regular character. This is really great for new players, as you start a new character, in a new storyline, and once you complete the first two stories, you’re in the thick of the regular game. However, this is far from a requirement. All factions, all races can take part in these episodes without having to make a new character. It is, however, the perfect starting point for a new player to jump into the game. Fortunately, these episodes are not lengthy, with the first being longer because it contains a tutorial.

The Age of Discovery content is also interesting because of where and when in the Star Trek universe it takes place. 2256: at this point in time, Kirk isn’t really all that important yet, hasn’t hit the rank of Captain. He’s spoken of at the academy, but he’s not the historic figure he will later become in the Star Trek universe. This is the beginning of Star Trek, during the Klingon War. This is just after the Battle at the Binary Stars, where thousands of lives and at least seven starships were destroyed on the Federation side alone. The Klingon side also suffered losses, and at least one ship was destroyed, though perhaps more than that. There’s only one recorded that I’m aware of. This is a chaotic, war-torn time in the Star Trek universe, which makes it an excellent starting point for the fighting that goes on in STO. One of the major points of the Star Trek franchise is understanding, science, and exploration. But it was not always this way, and this war with the Klingons is a good example of that.

Both of these missions are a lot of fun, as you can see in our Let’s Plays for the MMOHuts Youtube channel included in this article, which you should absolutely watch. They’re funny, honest. These missions are both fun for seasoned players, such as myself, and newcomers to the game. If you take the Age of Discovery episodes as an established player, you’ll leap right into the heart of the action, without any of the content that occurs down in Starfleet Academy. That part made me pretty happy, because I genuinely enjoyed the mission, and went back through it on my Romulan character I was leveling in my downtime. Each faction has their own introduction to the mission (“Secrets”), but it all winds up on the same path: We’re heading to the Delta Volanis Science Station to lend them aid. The second mission, “Downfall,” will culminate in the defense of Star Base One. No spoilers, but it’s a wild ride. After that, players have access to the Task Force Operation version of the Defense, which is a group-based instanced battle. These dungeon-style events are now all called Task Force Operations, to make them more uniform and grouped together. Also included are Random Task Force Operations, and completion of these give players a large bonus in addition to simply completing the challenge and reaping those rewards. “Defense of Star Base One” is a bigger, more challenging version of the final battle of “Downfall”, where players are grouped and tasked with defending Star Base One against wave after wave of mighty Klingon Ships. Despite having played Star Trek Online on and off for quite some time, this was my first dungeon style mission, and I was pleased to see that it felt smooth and enjoyable. While the mission is straightforward (destroy those dastardly Klingons), there is an optional part of the mission, if you want to feel like a real hero, you can defend the other Starships as they evacuate. These Task Force Operations still have a story attached to them, but honestly, most of my playtime in Star Trek Online has been alone. Despite seeing hundreds of ships flying around (or in many cases idling), I never interact with them. This was a way to group with other Federation officers and really immerse myself in the content.

The most important part of this update to me, though, were the changes to the Mission Journal. Originally, you had to do every single mission in order essentially, with very little room to skip around. Now players can skip their way through the content, and play the missions they want to play. If you aren’t interested in the Klingon Battles, and would rather do the Cardassian episodes? Do them instead! The content scales to you, so you can play at any point in time you want. You can’t skip the “handoff” missions that send you to the person in the series to talk to (typically the first mission), but you can skip everything else if you want to do specific content, or if you want to join your friends and do missions together. This really opens the game wide for exploration and discovery, as it was meant to be. This expansion also added a new reputation tier, with new rewards, which is always positive. The added benefit of Tier V Reputation now is that it upon reaching Tier V, it sponsors that reputation for your entire account, which replaces the old Reputation Sponsorship System. Tier VI is the new tier, and with it comes improved effectiveness of Reputation Traits, increased set weapon damage, alternate Vanity Shield Visuals, a Fleet Ship Module/Respec token and more. It really makes the grind for reputation feel worth it. I can say that these missions are an absolute blast, and no matter how you feel about the latest series from CBS, the action was solid, and the story was well told. The new player experience as a member of the Discovery era was delightful, and I think if you love Star Trek, but have been on the fence about playing the MMO, it’s a good way to try and see for yourself.

Based on its own merits, I loved this expansion. It did make me want to watch more Star Trek: Discovery, as well as play more Star Trek Online. Star Trek Online approaches Expansions a little different, and instead of loading players down with all of the content right away, it’s released in episodic chunks, and I like that approach. The major difference is that I was done with all of the current content very quickly, and if it weren’t for me having lots of other missions to take on, I might have been a little more disappointed. The twenty-thirty minute episodic format works well for Star Trek Online, and each mission continues to give a space scene, and a ground scene to tackle. While Age of Discovery only added a few stories so far, that’s the way this system works, so I was not expecting five or six new episodes right out of the gate. The updates and changes to the game that came with it are what really matter, and Star Trek Online is slowly becoming more and more beginner friendly. It’s definitely a step in the right direction.

I do also want to talk about a paid item. Introduced in this expansion was a ship that levels with you as you progress, up to level 30. The “Prototype Light Exploration Cruiser” is only in the Age of Discovery Starter Pack, but I do hope there will be another way to unlock ships of this style. It’s new tech in Star Trek Online, and it makes me wonder if there will be a redesign of the ship system as they progress. If more of the Starships leveled up with you, players would have more freedom to use the Starships they felt a kinship or calling to, and perhaps would be more inclined to farm or spend money on direct purchases, if they knew it would last longer in their career. But this ship, which we were given to use, felt pretty damn powerful, and it was easy to get into missions and just play. When I originally started playing, I died a lot. Whether that was because my starship was awful, or I didn’t know what I was doing, that’s open to interpretation. But this ship definitely felt worth owning. Ship overhaul is, of course, is purely hypothetical on my part. The Age of Discovery is upon us, and it is 100% worth exploring, no matter if you’re already level capped, or brand new to the game, it’s a story worth experiencing.