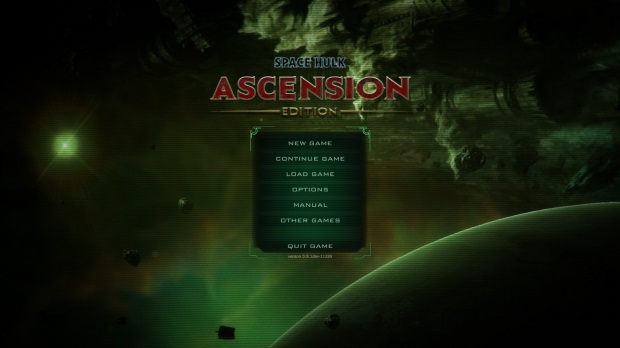 In Space, No One Can Hear You Scream:

Space Hulk: Ascension Edition is a take on an old board game by Games Workshop, creators of the famous (or infamous, depending on who you are) Warhammer franchise. Players take turns controlling Space Marines known as Terminators, who are fighting the Genestealers, furious little alien bastards who leap out of dark spaces and corridors, ripping and tearing anything they can get their little claws on. They are not all so little and swift. Some are humongous and imposing, and somehow still manage to not be detected by the Terminators when behind or beside you. 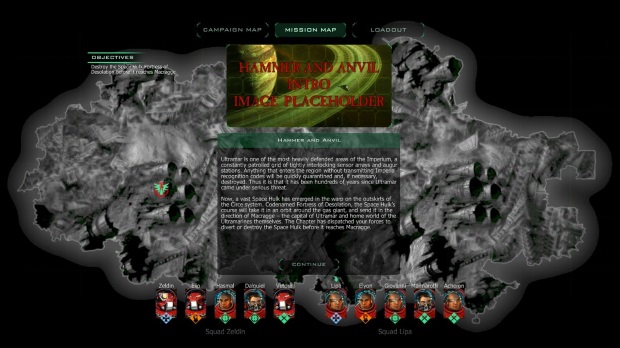 There were mixed reviews for the previous Space Hulk, with claims that it failed to adhere to the source material. Now, anyone who follows my work knows I love strategy games. There’s a joy to be had in outwitting the computer or your fellow players. However, despite the update to the Tutorial, this game is still incredibly challenging. Even on Easy you’ll find that Genestealers will pop up behind you if your squad is not formed correctly or standing in the right position. Simply standing in the wrong direction means they cannot see the enemy, though they may see the red aura on the tile that indicates something evil is there.

Aficionados of the series will certainly want to see this game in action, enjoying their grimdark bloodbath. Newcomers to the strategy genre may want to be aware that this game is neither gentle nor forgiving. However, you are a Space Marine in the service of the Emperor! Cowardice does not become you! Set ablaze the alien, and delve into the Space Hulks! 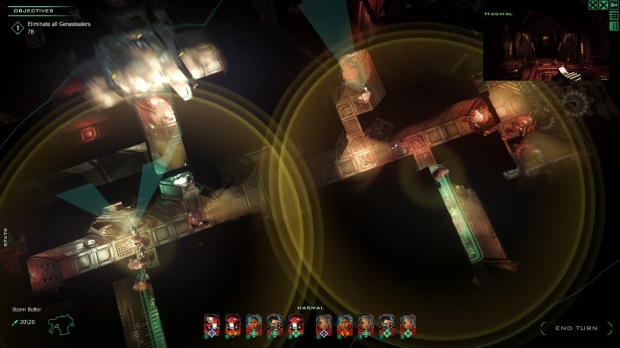 Burn the Heretic, Purge the Unclean:

In Space Hulk: Ascension Edition, you can play as one of three chapters of Space Marine: Ultramarines, Blood Angels, or Space Wolves. Each of these have their own strengths and weaknesses. Each Chapter has their own combat focus; Space Wolves focusing on Melee, Ultramarines being ranged, and the Blood Angels having a little bit of both. There is really no wrong pick here. Whatever playstyle suits you, there is a chapter of Terminators awaiting your command. After you choose your faction, you pick the difficulty, ranging from Easy (Genestealers spawn slowly, Terminators never die, but no Achievements) to Hard (more frequent spawning, killed Terminators are replaced by beginners/rookies, stronger enemies) to Insane (same traits as hard, but no in-mission saves, and much harder still)! 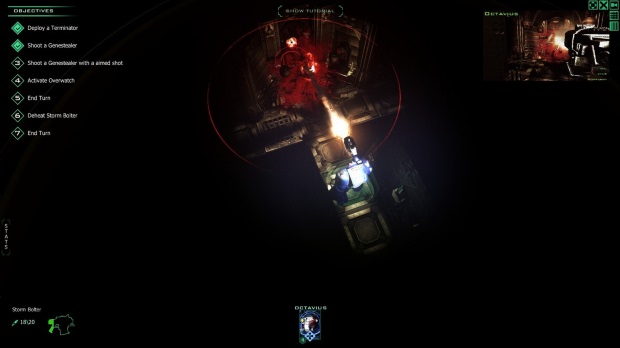 The ultimate goal is to enter these Space Hulks and purge all alien lifeforms that you find within them, or close them off from the inside, preventing anything from escaping or entering. These massive Hulks are very dimly lit, and the only light you tend to have are from doorways and your own Terminators. As the game progresses, characters (if they survive) gain levels and experience points to go towards acquiring new skills, weapons, and abilities. For example, you can make the Overwatch ability stronger. Overwatch costs 2 of your AP (Action Points) and hunkers the Terminator down in a direction. Any enemy caught moving in his line of sight will be shot down. You can also go and change their looks and name if you find their names lame or boring. Progress will also increase the Terminators skills as well. But playing in any difficulty over “Easy” will give this game a feel similar to Fire Emblem; if a Terminator dies, that’s the end of him. At least in Normal, you will gain a new unit (post-mission) that is similar in stats.

Without the Emperor, There is Nothing:

The missions are straight forward, or so they seem: destroy the Genestealers, close off doors within the space hulk, and destroying command centers with fire. To do this, you must pick either one or two squads of Terminators, depending on the mission. Much of the play time in this game feels like it is planning and plotting, trying to set up your squad so that they are not surprised and killed in one hit by these Genestealers. Each step or change of direction costs AP, and you only have so much of it. You cannot undo what you have done, so play carefully. It also costs AP to open/close doors, move diagonally, and fire your weapon. The more difficult something is to do, the more AP it will cost. 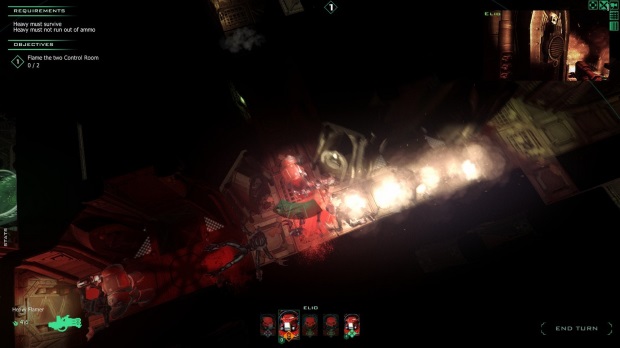 Within these tight corridors are also red lit Air Ducts, which Genestealers can crawl out of and surprise your team of Space Marines. If you position a Heavy Flamer before one of these, you can fill the corridor with fire, killing anything within it. But be aware, you cannot reload flamethrowers like a clip of bullets. Once it’s done, it’s done! And there are missions where the Flamers cannot die or run out of ammunition or it’s game over, because they are crucial to your task. It is also important to note that sometimes your gun will jam, and you will have to spend AP to unjam it. It also costs AP to reload, or to lower the cooldown on your gun so it does not overheat. You have an infinite supply of bullets, provided you can spend the AP. 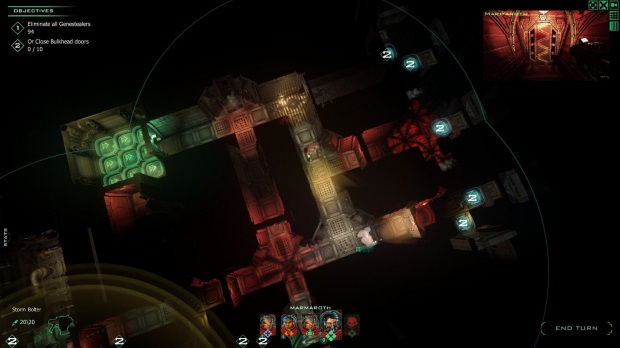 One really cool thing about this game is the camera. In the top right of your screen there is a camera that is a third person view of whoever you are highlighting. Anything they do or see is visible on this, and can grant interesting perspective, or simply give you the pleasure of watching the Genestealers burst into flames or get drilled vigorously with bullets. Sometimes these missions require you to stand on a tile to activate/deactivate something. Using these tiles also requires AP, but when my AP pool is full and I cannot close the bulkheads for a mission, and most of my team is laying in crimson piles on the floor, it gives one a very grim prospect of how the mission might end. However so far, Full Throttle has been very swift in answering concerns, completely redoing the Tutorial to make it more accessible to new players, which I am certain everyone who uses it will appreciate.

There is a lot to like about Space Hulk: Ascension Edition. It feels very true to the source material; everything is dark, violent, bullet-filled. Careful plotting and planning will ensure success, while simply pretending you are an Ultramarine and running down hallways with bullets flying will only net defeat. It is an incredibly challenging game, which is not a negative mark; it’s about time I play a strategy RPG that makes me want to tear my hair out in frustration! I can appreciate that. However this is not a title that I could play for long periods of time. The constant darkness and surprise ganks by Genestealers can grow quickly tiring. I definitely wish there were more variety in the voice acting, and I am curious to see what future content is in store, whether it will be more chapters, more enemies or units to command. I do feel like it is a step up from its predecessor. 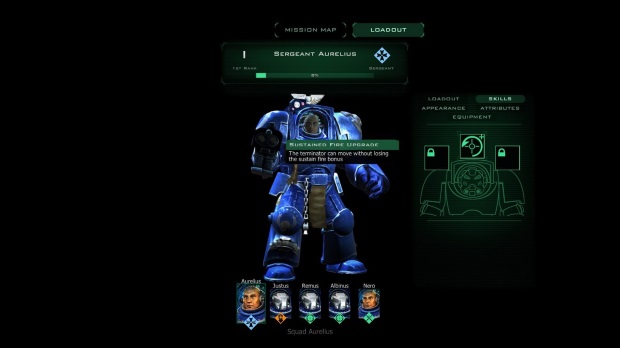 I cannot call the graphics beautiful in this case. There is so little to be seen! When halls are lit however, the attention to detail is truly there. The brunt of your visual light will come from spread out units, fire lingering from a Heavy Flamer, or tiny blips of light from corridor walkways. It is a marvelous representation of what the interior of a Space Hulk should look like, and even the visual of a Space Marine stomping over a still bloody corpse of a Genestealer is pretty fantastic; but it feels very repetitive. Even though that it shows what the grim world of the Space Marine is, I’d still like to see more.

Controls are very solid. I had no problems outside of my own bungling. I hate that turning can cost so much AP and absolutely ruin/end the life of one of your Terminators, but that is the result of being careless on my part. The game warns you of this in the tutorial and shows you the AP cost before doing anything, so it is the due diligence of the player to be advised.

The sounds are amazing. Even though the Terminators pretty much all sound identical, in a storm trooper fashion, the sounds more than make up for this. Everything can be heard, from the discharge of bullets or flames, squelching sounds as steel-shod boots stamp over a dead body, and the sizzle of flesh as it is consumed by the fires of the Heavy Flamer. The music is a trifle uninspiring, but I do feel like dramatic booming music might be out of place in the dimly lit halls of the Space Hulk.

I understand that this is based off of a board game, and as such, there is only so much you can do with game features. There are decent customization features (in that they exist at all), and the gameplay is certainly not bad. But the ramp to get into this game is very steep; the first time a Genestealer sneaks up behind your most important Terminator, drags him to the ground and kills him will be just as infuriating the 20th time it happens as it was on the first. It is truly not a game for the impatient. I would like to see non-board game elements though, such as scrimmages against other players, or even co-op where squads go into Space Hulks and team up with friends against their foes.