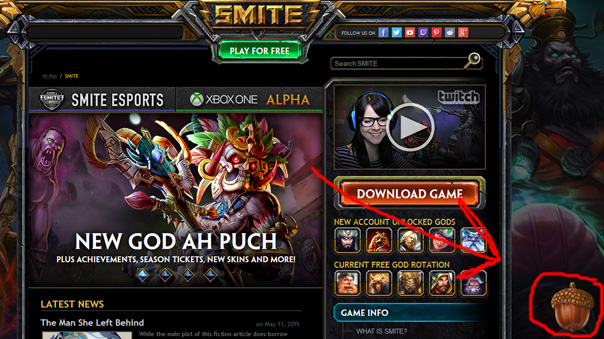 Have you visited SMITE’s official website lately? You may have noticed something odd. Hirez has placed a not so subtle acorn over their site skin bar, just tempting you to click on it. Try and it hides off screen, only to return to tease you once more once you’ve given up. Look at the site code and you’ll discover this object is being described as ‘not an acorn.’ What could it all mean?

Those SMITE players following the datamining community will be aware that the next Norse god planned for release to the roster is none other than the message of the Yggdrasil tree (and notorious deity of trolling, yes Norse has at least two such deities), Ratatoskr. Why an acorn? Well he’s kind of a squirrel. Beyond that he seems to use a variety of magic infused acorns to wreck you day in a kit that, while not fully revealed, is shaping up to be one of the most annoying kits to deal in some time. Not OP annoying Bellona, just flat out “Ugh stop hitting me with an acorn” style annoying.

We’ll be keeping a close eye out as Hirez is sure to be revealing further details on Ratatoskr in the coming days.