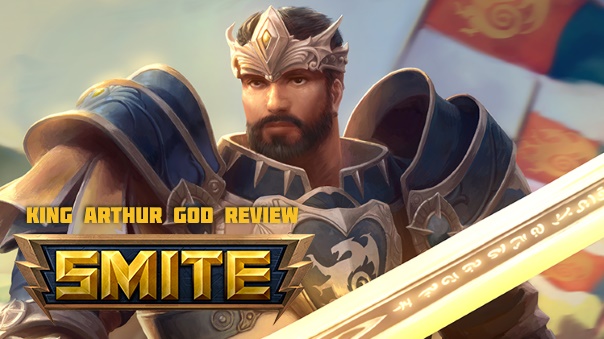 With King Arthur, we have our first “mortal man” in the Battleground of the Gods. Guan Yu doesn’t really count, since he’s revered as a God, and considered a mark of good fortune to have Guan Yu in your place of business. He’s definitely something unique in the world of SMITE, and is the first member of the Arthurian Pantheon, with Merlin waiting in the wings. He is the Wielder of Excalibur, and he can do so many things with his absolutely bonkers moveset. There is something I’m going to go into a little more detail below, but there is one thing I absolutely, positively loathe about King Arthur – Why is he forced into Smart Cast? I don’t play with it, and I waste so many ability casts because I’m so used to being able to line up a shot before I drop it. Sure, I’m ultra casual, being Gold (at best) in Ranked Conquest. But I’m positive that I can’t be the only one who feels this way.

King Arthur is an interesting character, conceptually speaking. Whether you believe he was a man who really existed or not, he’s a character written about for centuries. He has been referenced in virtually every medium (my personal favorite being on Babylon 5), and while King Arthur is the ideal of honor, valor, and dignity, his “creator”, Sir Thomas Mallory, was an undisguised knave. He was charged with a variety of crimes, rape, theft, and extortion among them. It was said he even broke out of jail in a suit of armor and swam to freedom. It’s a fascinating thing to consider, that such a vile person could have written about such a valorous character. The Wielder of Excalibur does not share the ideals of his creator, though. His world view was one of virtue. He was ultimately betrayed by his own son, Mordred. Even King Arthur’s legacy is shrouded in confusion though. For example, in the Irish Myths, he’s regarded as little more than a thief, and Mordred is his nephew (as Mordred was the son of King and Anna, Arthur’s sister). But how is the Once and Future King?

Passive: Steadfast (Buff): Each ability that damages Arthur gives him a stack of Steadfast. This reduces damage taken (1.5% per stack) and increases Energy gained (25% per stack). Steadfast can stack up to 4 times and lasts 15s. Each time King Arthur uses an ability, he swaps between Standard and Combo abilities. All of his abilities are also Instant Cast. In addition, Attack Speed and Item Passives do not increase his basic Attack Speed, only his Energy Gain (Attack Speed conversion: 33%).

King Arthur really needs his kit to be online and needs strong defenses to be a threat. His early game is honestly pretty weak. This is when you need to strike, and bully King Arthur just as hard as you can; especially in Conquest, when you have only one ability to use. I tend to balance his abilities, not really stacking one higher than another. This is due to all of his abilities being useful in one situation or another. I tend to start with his 1 (Overhead Strike), then 2 (Twin Cleave) and finally 3 (Battle Stomp) at level 3. In Arena, this isn’t an issue, but I also don’t really think he’s that strong in Arena (my preferred mode). It’s imperative that King Arthur is in the fray, building energy, and getting those Steadfast stacks. That makes his early game pretty dangerous because to me he feels like a very high-risk/high-reward god to play. The later this goes on, the less risky he is though. While he can’t really chase people down, once he’s led the charge into a teamfight, he’s going to be a threat. He’s also likely going to be incredibly tanky and can pick a target and bash them senseless with CC and raw damage. He’s not going to hit fast, but he will hit very hard. I highly recommend practicing and learning the ranges of all of his abilities. In the companion video for this review, you’ll probably see me missing a lot of abilities, which just adds cooldowns and leaves me vulnerable. This has not changed appreciably. While this god definitely has a lot to learn, one thing makes him very flexible: combos.

Are there “viable” and “more reliable” combos you can learn? Of course. Can you get in close and just mash buttons and see what happens? You sure can! Most gods seem to have very strict, straight forward Combos. You know what Ra is going to do, you sure as hell know what Hercules is going to do. Loki? Come on, don’t act like you don’t know exactly what his combo is going to be. In that case, I use the word combo kind of loosely. But King Arthur? You have absolutely no idea what’s going to go down in that duel. He might 1-1-2-3-2-3-4, or he might just try to get in close and 1-1-2-2-3-3-4! They might be smart and weave auto-attacks in between the abilities, or they might just mash out abilities and hope for the best. That’s what makes this god so interesting, and why it surprises me that people weren’t picking him. Normally when a new god comes out, I have to get a party together so I have a shot at playing them. That wasn’t the case in Arena with King Arthur. While I’m not crazy about him in that mode, normally it’s very difficult to get a new character in any mode (save Assault). But beware – some of these skills have a nice long wind-up, and he’s got nothing to make him CC immune (except for knock-ups), so someone who knows what he can do can/will stop him from finishing a combo. Plus if he dies, he loses all his Energy and has to build it up again. I’ve found that in the Early Game, I will stick to just dumping energy with his 35 Ult, and only in the late game, when I feel invincible, will I be brave enough to go for Excalibur’s Wrath.

Personally, I don’t see Attack Speed items being all that great on him. Sure, it gives Energy instead, but I feel like he’s better served with items that make him beefier. His damage is already sound. There are some AS items that I think are okay on him though, but I would not build more than one. The idea is that he gets into a fight and is a bully, and has the defenses to last in a sustained battle, not “Oh hey, let’s build lots of energy and hope we have enough to drop ult before we die!”. . . that’s not such a good look. If I’m going to build a starter item on him, it will be Warrior’s Blessing without a doubt. It gives health and reduces damage taken, so that’s a no-brainer item. Ultimately, almost everything you build will make him sturdier, so consider him a guardian with damage. One stat I think is incredibly useful on him is CDR. The great thing about CDR items, is they’re almost always useful for someone like him. Breastplate of Valor, Mantle of Discord, Gladiator’s Shield, these are all terrific on him. But let’s go back to Attack Speed items one more time. If I had to pick one to use, it’s going to be Soul Eater. It also offers all the stats he needs, plus a little sustain. It won’t be hard to build it up on him, I think. A runner up would also be The Crusher. I can see the Pen being very useful on King Arthur. Plus it deals additional damage when you land your damage abilities.

I would argue that Gladiator’s Shield, Warrior Tabi, and Blackthorn Hammer are his must-build, go-to items. Blackthorn to me is a very underrated item. Any god that can leap can get away with the greatest of ease. From there, it’s a matter of picking the right tank items for the job. Are they stacking tons of magic damage? It’s time for Oni Hunter’s Garb to shine (and when doesn’t it? It’s incredible). Want something that will defend against the other Warrior, while also giving you some more physical damage? Step right up, Void Shield! Ancile is a good pick, as is the Mantle of Discord. I love Mantle, but I play a lot of Arena, and it’s not that hard to get a Mantle and run right back to the fight. Runic Shield, Genji’s Guard, and Hide of the Urchin are also solid choices. Ultimately, you can build King Arthur in a bunch of crazy ways. Personally, here are a couple of builds I’ve messed with to varying degrees of success.

Ol’ Faithful: Gladiator’s Shield, Warrior Tabi, Blackthorn Hammer, Pestilence, Void Shield, Mantle of Discord. I love this build because it has the key items I want, and the Pestilence to stop That Annoying Warrior/Assassin Who Keeps Gaining Health. Anything to slow that down is great. Plus, more teams need to be aware of anti-heal and use it more.

A Bit Mo’ Mean: Gladiator’s Shield, Warrior Tabi, Blackthorn Hammer, Witchblade, Soul Eater, Mantle of Discord. Sure, it’s not as tanky, but you will keep people pinned down, and be able to beat on them pretty safely with this proposed build. It’s fun, it’s risky, and I think it might be pretty fun to play around with.

I know I say a lot that I don’t play Warriors so much, but I can’t figure out why. All Warriors basically use Guardian builds, with maybe a damage item thrown in for spice. King Arthur is a god I would play a lot more if he didn’t instant cast. I am sure I’d get used to it eventually, but I’m not a fan of it. It doesn’t fit the way I approach the game. I think the Once and Future King could see a lot of play, but I’m not so sure that he’ll be an immediate pick/ban. I think King Arthur’s going to be that spicy, bold pocket pick that comes out of nowhere, and I think that will make people see how fun he can be. He’s very fluid, and there are just so many different ways to approach playing him, that both button mashers and combo kings will take to if they just give him a try. His auto-attacks are great, his kit is great, and all-around, he’s pretty fun. I have accidentally stolen people’s buffs thanks to his autos though, so I feel like maybe I should round things out with that. Practice with him, and find how he works for you. There’s no “right” way to play King Arthur, and I love that about him. However, he’s incredibly, overwhelmingly easy to stop. He has slow wind-ups, slow movement abilities, and simply silencing him seals his doom. He definitely needs some love. I think it will be hard to take King Arthur from being “okay” to “pick or ban tier”, without making him too OP. Some of his abilities could be a little faster, and maybe letting him keep some of his Energy on death? One thing I was reading (shoutout to Lermy who pointed this out), his 3 definitely needs to be cancellable. Being stuck in that animation has caused me no end of suffering. I think he just needs a little somethin’ extra to make him a viable pick. I cannot help but wonder if he was made this weak on purpose.