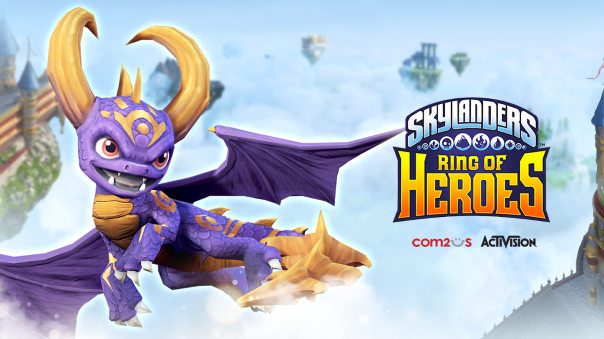 Skylanders is an interesting beast. I never really got into Spyro, and I didn’t get into the offshoot, Skylanders. Skylanders is set in the Spyro universe, with a variety of elemental-based, collectible figures that players would activate into their game, much like Amiibo functionality with the Nintendo Switch. They’re bright, colorful, and fun to collect from what I understand. That leads me to now, with Com2US. They acquired the rights to Skylanders for the purpose of making a mobile game, and with all the various designs in the franchise, it’s fit for a mobile release. It would make for a terrific mobile title. Com2US already has a solid design in Summoners War, and you will find a lot of the bits and pieces that make up Summoners War in Skylanders: Ring of Heroes. I do love the design of the characters, they’re vibrant, and the 3D models look very cool. Even the lower-rank Skylanders still look awesome. I have a feeling that fans of the franchise will see a lot of familiar faces, that’s for sure. I also included below, Com2US’ Gameplay Preview below to watch.

The Skylanders universe has been fractured with dark-colored portals, and from them, even more creatures pour out and into a once-peaceful land. So it’s up to Spyro and his pals (or whomever else you get in your team) to set things right once more. The tutorial is a little on the long side, but it succinctly explains everything a player might need to know. Coming from Summoners War, it does feel similar, but unlike each character having an individual turn, the player has a team and a pool of Energy Crystals. Each ability for a Skylander has a cost and these refill over time. So instead of using each character once a turn, each turn you pick an ability across the board of your squad. This creates a more tactical approach to the game, where you have to think a little harder about what you are going to do. It’s also much prettier than Summoners War (not that Summoners War is ugly, mind; Skylanders just has higher resolution assets it seems).

The actual combat is very smooth and fluid, and of course, if that’s your want, you can speed it up and automate it. I’m surprised Spyro isn’t the most powerful unit in the game, but he is quite good, and I did get to try a number of the different Skylanders. You don’t have to balance your team with different elements, but you’d be certainly foolish not to. It’s important to be able to cover as many strengths and weaknesses as possible, in PVE for sure. There’s also going to be squad-on-squad PVP, and while having various elementals in those fights, it could be fun to gamble and see if your squad naturally out-powers one thanks to elemental weaknesses. But the PVE tactics are already pretty fun, figuring out what skill and element combos work best together. But the real question is “How do I get those characters”? I’m going to get to that in just one moment.

Much like Summoners War, you have an island base where you plan your actions, summon your Skylanders, equip them with Runes (also familiar), establish buildings, and all of the other day-to-day minutiae that makes up this mobile game. Much like in typical squad-based mobile games, it has a rarity system to base the value of characters, but here’s where I find my one major fault with this game so far. It brings back the tedious, frustrating, and altogether infuriating “Puzzle Piece” system. As you progress, you’ll get pieces of characters, and once you have the right amount, you can summon that character/improve them, and put them on the team. I saw it again in the latest Power Rangers game, and I hope that this style of summoning isn’t making a comeback. There’s nothing more frustrating as a player than spending money on a mobile game that you enjoy and getting nothing for it. I hope they’ll reconsider this style, but if not, make concessions to make the pieces of characters you partially have available in the game.

Com2US has the right idea here, they have a functioning design for a fun PVE/PVP game, thanks to Summoners War, but I’m very firmly against the present style of summoning, using the Puzzle Piece method. I don’t know that I have met anyone that enjoys it, and as I said, few things are more deflating than spending hard-earned money, to get part of something. Other than that, it’s a game that values strategy highly, instead of just making one busted comp that smashes through every team it comes across. I would love to see a PVP scene for this game. I want to see if people simply pick the characters that they love from the franchise and power them up as much as possible, or try new characters that fit their ideas of what a PVP squad needs to succeed. I love the “pick an ability” style of combat too. Simply having four or five abilities pop off every turn looks and feels cool: Just look at Brave Frontier and Summoners War. This style feels more rewarding when it works though, and I like that.