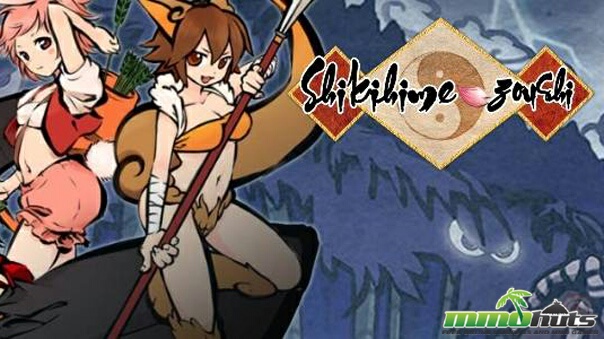 Introduction
Shikihime Zoushi is a browser-based strategy game being published by Gamigo. The game was originally released in Japan but has been brought to various other regions and translations, with English being the latest. As an Onmyoji, you will summon and combine your Shikihime to do battle and cleanse the land of evil spirits. There are also elements of Territory Control and crafting. Chances are, if you like Final Fantasy Tactics, you will probably find some fun in Shikihime Zoushi.

Customization
Honestly not as much as you would probably want. Don’t get me wrong, though, you do get choices. For example, you can produce equipment to put on your Shikihime. You are also given a choice in what Shikihime you summon and how you combine them. In general, once you finish the tutorial you’re given a decent amount of freedom in what you do in the game. There just aren’t many features to facilitate true “customization.” So Shikihime Zoushi gets a low score in customization for me. 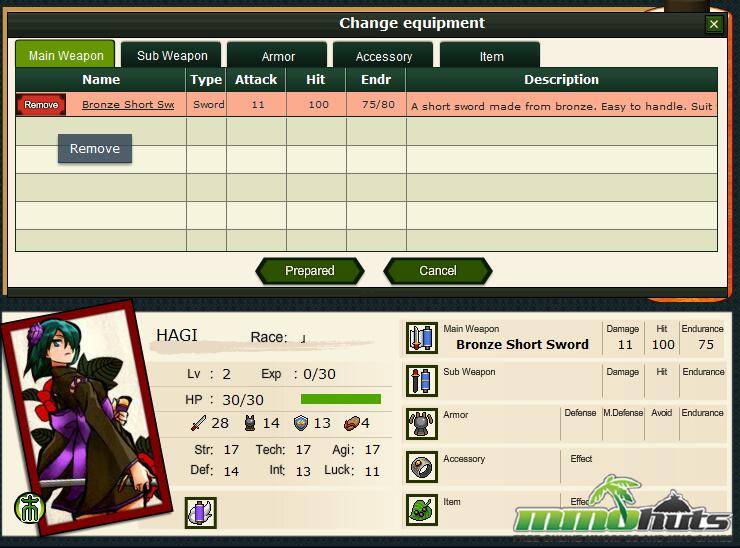 Customization is mostly limited to stats, rather than visuals.

Graphics
Shikihime Zoushi is a 2D game, so it’s full of hand-drawn artwork and pixel art. I’m not the biggest fan of some of the art, specifically the field art. Everything else is great, from the monsters to the Shikihime and the ‘card’ cart. But the fields just look crappy. My favorite portion of the art is the card or avatar for the Shikihime. Each is detailed, looks fantastic, and has a traditional feel to it.

Controls
For the most part, the controls are fine. There were some portions where I found the controls unresponsive, but it’s probably more to do with my browser (Firefox) than anything else. As it’s browser-based, all of our interaction will be via the mouse. So the game can be played one-handed, which is always nice with these sorts of games. All-in-all, I wasn’t disappointed with the controls, but I wasn’t impressed either. 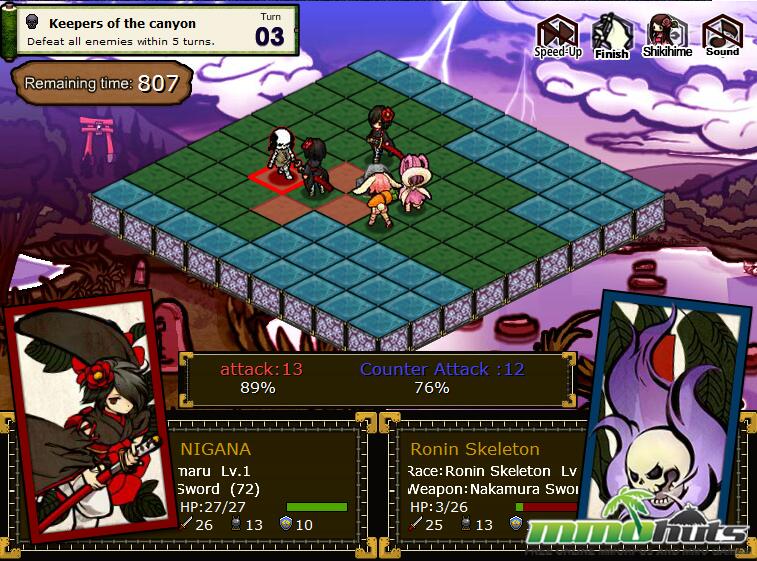 Anyone familiar with the genre should figure controls out instantly.

Community
The community isn’t so large yet, so not much of one. Or rather, if there is a large community there isn’t much in the way of interaction. Perhaps this will get better at end-game gameplay, but even after several days I never interacted much with the community in the game. The game does allow for PVP, though, and you can even join alliances. This is another area where Shikihime Zoushi falls short.

I will say, however, there is a handful of very dedicated players. There’s a forum, a wiki, and even a few blogs centered around the game and its inner-workings. Truth be told, you more than likely won’t realize the full complexity of the game without visiting one of these resources. When I was first playing the game, I was essentially just blindly making my way about and thinking, “Eh, this is kinda interesting.” But as soon as I visited the forums it was like a slap in the face because I realized there was a whole layer to the game that I was missing out on due to ignorance. So, if you do play, be sure to visit the forums. Also check out the chatbox, though it seemed to bug out for me most of the time. (Again, this probably was a browser incompatibility issue).

Gameplay
Shikihime Zoushi is a strategy game that makes use of turn-based combat. I feel it would actually make a really fun mobile game, but as a browser game it’s still alright. As the name suggests, you take control of “Shikihime” and do battle, trying to capture territory and fight your fellow players. The play style can best be described as similar to Final Fantasy Tactics. Other features include the ability to expand territory, do quests, research and build weaponry and armor, and join alliances for protection and power. 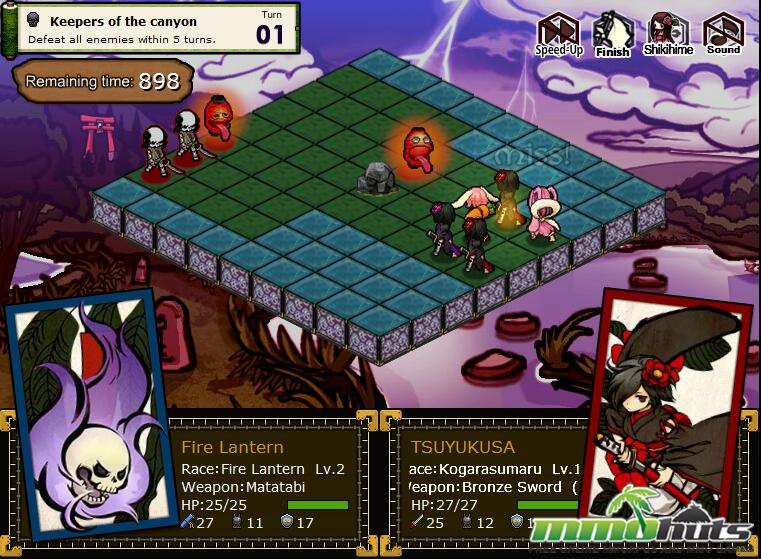 All features ultimately lead back to empowering your Shikihime team.

Shikihime are the central feature of Shikihime Zoushi. It’s in the name! And as such, you will probably realize early on that everything in the game will revolve around your Shikihime. The research and production features exist solely to increase the power of your Shikihime. You do battle using your Shikihime, and can even combine your Shikihime to make more powerful Shikihime. Shikihime are brought into the world by performing a ritual that consumes a special resource you can gain from battle, quests, and expanding your territory.

As I said, battling is similar to that in Final Fantasy Tactics. The field is a grid and depending on its stats, your Shikihime can move a certain number of grids per turn. Depending on its type and abilities, it will either have ranged or melee attacks, with melee requiring you to be right next to the enemy. The ability of Shikihime aren’t always damage oriented; some will be support types that can do things like heal friendly Shikihime. In short, it’s your typical turn-based strategy battle system and will feel almost identical to a lot of other games in its genre.

As I said, you can combine your Shikihime to get something more powerful. This is a concept they introduce you to very early on during the tutorial phase. The system is pretty straight forward, so it’s not hard to grasp. Really, after a while it gets a bit tedious. Summoning Shikihime and then combining them, at some point you just start trying to make the ‘best’ Shikihime. And, like most turn-based strategy games of this type, there are a handful of Shikihime that will just completely stomp all competition in a majority of situations. Unfortunately the vast variety of Shikihime each filling unique rolls in the earlier phases of the game are what made this title stand out to me. The longer you play, the more everyone ends up with the same overpowered crew, and any semblance of choice begins to vanish.

The research and production systems are simple, but still marginally interesting. Unless this is your first game, you won’t be blown away with what you find. In fact, if you’ve ever played a game that offers a research system before, you’ll probably be instantly familiar with the concept – you choose an option and then wait. Production is much the same story, you choose an option and then wait for the final product to be done. Despite that, this feature is important because it gives you the tool to further customize your Shikihime, allowing you to build for different strategies.

Expanding your territory by cleansing the land is one of the key goals of Shikihime Zoushi. When you “cleanse” a piece of land, you will fight and defeat an NPC enemy. You are only able to purge a certain number of land tiles within a certain time period. This is achieved by the game, giving you a special token used to claim land only if a certain amount of time has passed. Though it is worth noting that you can stack up to five tokens (Which are called Purge Tickets) should you not have the free time during the week to land grab. A lot of your time will probably be spent on purging, as each tile has resources attached to it that you’ll need to summon better Shikihime and make better equipment.

All features ultimately lead back to empowering your Shikihime team.

A system that is sort of tied into the Territory System is the Faction system. During the tutorial you will be presented with the option of joining one of four factions – Blue Dragon, Red Phoenix, White Tiger, and Green Tortoise. There are other features such as Expedition, Colony War, and Subjugation, too. These are what I would consider fluff features meant to entice you to continue playing the game and some other typical strategy features, such as mining. For example, Subjugation is a PVE feature, similar to the campaigns you might find in similar strategy games.

Conclusion – Good (3/5)
Shikihime Zoushi has some pretty neat things going for it. The setting alone makes it worth a play, but the combat system which allows for a surprising amount of tactics and strategy also allows the game to shine. I would definitely say that the game would be a lot more fun if it were on mobile – this is the kind of game I would rather relax in bed and play on my phone – but it’s alright as a browser game as well. Maybe it’ll end up going that way. Overall, I would say Shikihime Zoushi is a very solid game but far from impressive.

Features: 3/5 – Solid features, but nothing new or innovative.

Customization: 3/5 – Really not much.

Graphics: 3/5 – Fantastic artwork, but the field graphics left much to want.

Controls: 4/5 – Worked alright without many issues.

Community: 2/5 – You probably won’t notice you’re playing with anyone.

Overall: 3.5/5 – Almost 4 stars, but the medium (browser) didn’t allow the game to have its full potential.