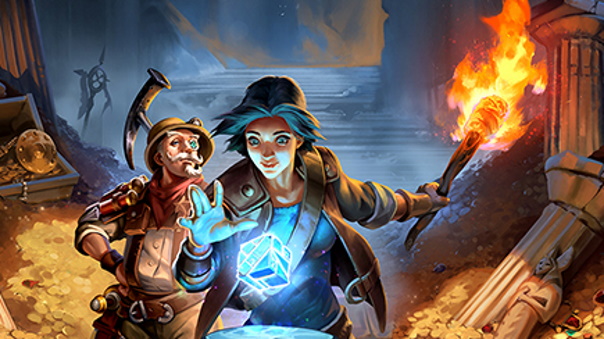 If you’d like to also see Jason’s thoughts on RuneFest, click the link below. We also have an interview coming soon, be on the lookout.

RuneScape is still going strong after eighteen years, and that’s nothing to sneeze at. During our time with the developers before RuneFest started proper, we received some sneak peeks at the major announcements that were going down as the weekend went on. While I have enjoyed beginning RuneScape, I don’t have the same attachment and nostalgia for OSRS. Those particular announcements didn’t hit me quite as hard, but it’s still awesome to see new content coming for it! Runescape, Old-School RuneScape and RuneScape Mobile all have announcements. Sadly, no word of Chronicles: RuneScape Legends coming back though.

That’s right, after three years, RuneScape is getting a new skill! It’s more adventurous than traditional Archaeology skills in other games, where instead of playing “Red Light, Green Light”, you adventure and explore treacherous new biomes. Note to come back with greater details. Speaking of Archaeology, what would a new skill and skill system be without some cool rewards? If you’re digging through ancient civilizations, surely that means we’ll find new stuff, right? You would absolutely be correct. There are three new genres of rewards coming with this, to encourage exploration, aimed at high-level players. The first of these is “Ancient Summoning”. You can make a pact with some of the monsters you’ve slain with other skills. Once you have done this, they can help you do battle, and become your familiars. I honestly love this, because every player can be a pet-class character if that’s what they want. Pet Classes are some of my favorite ways to play an MMO.

Perhaps that’s not your cup of tea though. There’s also “Ancient Invention” rewards to uncover! One of the more fascinating things about fantasy storytelling is the notion that the civilizations before yours were more technologically advanced. With “Ancient Invention”, players will be able to create and make use of these inventions from the past. There’s a nice variety of them we got to see as potential rewards, and they are definitely worth it.

Of course, there will be weapons you can dig up and make use of because that’s one of the best parts of Archaeology to me. But we do have one more new type of reward: “Relics”. Relics are a perk that is bound to the player and is so amazingly powerful that you can only have one active at once. If you’d like to know how powerful these are for a base of reference, it’s like being able to teleport anywhere you want, without paying a cost. It’s that good. There will also be cosmetic pets and things to acquire, and those are always a fun time. Archaeology will be an Elite Skill (1-120), and the free skill cap will be 1-20, instead of 1-5. This skill is scheduled to be released in January 2020.

Dino Farm: The Ranch Out of Time:

Last summer’s “The Land Out of Time” content is going to receive some love as well. In “The Ranch Out of Time”, you can raise and nurture powerful primal beasts to provide “Primal Extract”. I love the idea of having a ranch to raise dinosaurs and other types of lizards and beasts, but it does make me a little nervous. I have seen Jurassic Park, after all. You can expect The Ranch to be in-game before year’s end. The ultimate perk for this new feature is that it will serve as an expansion for both Herblore and Farming. A “Farming Guild” was teased, as was the “Remote Farming Machine”. There’s also the forthcoming Bloodtree, which has to be off on its own, on account of the blood flowing through it. You won’t want blood ruining your cabbages and potatoes, do you? Herblore will also go up to a Skill Level of 120.

There are some truly spectacular new potions that will be available to craft also. “Extreme Poison” is an example of this, as well as the new and mighty “Powerburst Potion”. Powerburst Potions are new, and while they will offer truly overwhelming might, they will do so for the briefest of fractions of their predecessors. They will let you be virtually superhuman for a moment in time, so use them wisely.

We learned that the “Desperate Times” quest will ramp up, with the arrival of the follow-up quest, “Desperate Measures”. I’ll have more details about the quests as I can get them. In addition, they also revealed that the “Zaros Senntisten” quest is on the way. In the Summer of 2020, the “Elder God Wars ” Dungeon will arrive, and this one should be something special. The gods that are trying to ruin the world are locked in an intense civil war and of course, you drop right into the middle of it.
The development team teased that the “Azzanadra” Quest is also forthcoming. Their aim is to release new quests every two months and have a new team put together to focus on exactly that: adding more quests to the game for their audience. Sounds like there is plenty of new content on the way for RuneScape proper. What about the other games?

In 2020, Oldschool RuneScape will receive a new expansion: the Mortyania Expansion & Darkmeyer. This will bring the “Sins of the Father” quest as well. This quest is the penultimate quest in the Myreque series. The city of Darkmeyer will add a new Agility Activity to the game as well, which will no doubt be useful. A new Group Boss was revealed, The Nightmare of Ashihama. This is more of a traditional boss encounter. However, they will be inviting the community to come up with ideas for the rewards for defeating this encounter, so that’s pretty damn awesome. As there is no official Clan System in Oldschool RuneScape, that will be changed next year also. Clans will be able to have 500 members, as well as Discord support to improve communication. I can imagine this was a highly-requested feature, and so it is on the way.

Time-limited Leagues are on the way to OSRS! The idea is that they will test your ultimate knowledge of the game, by offering particular restrictions to make the game more challenging, as well as exciting. There will be achievement points to pick up in these, more than a player will likely be able to acquire per League. The nice part is that these will also head to your main account. Each League will have its own ruleset to adhere to. This first League, “Twisted League” begins on November 14th, 2019 and will have Ironman players tackling content on the continent of Zeah. Which leads me to the next thought, Group Ironman.

A long-time player request, a new version of Ironman is coming, Group Ironman. In it, groups of 2-5 will be able to team up, on a fresh character, with the typical Ironman restrictions. However, the people that have teamed up do not have the typical “sharing” restrictions, so they can work together, focus on particular skills and goals, and tackle RuneScape in a brand-new way.

The main goal right now in RuneScape Mobile is to improve the new-player experience. They also discussed briefly a Parent-Child Interface Rework, so that the PC version and the Mobile version’s interface look different. You absolutely need them to be different so that you can easily navigate and play the game with just your fingers. With that also comes a Visual and Layout overhaul. The biggest change for me is the removal of the inventory scrollbar. That was just clumsy and cumbersome. Now the inventory is entirely visible on the screen and takes up a reasonable amount of screen space.

Another useful addition is the “Push Notifications”. Now when something in-game has finished (EG: Your cabbages are ready to be picked), you’ll receive a push notification on your phone, so you can take care of it. I imagine this will probably also be tied to the main OSRS account if you have the mobile version on your phone as well as PC. This is sort of neat, but as long as you can opt-out, I think people will be happy. Not everyone wants them, but it is a cool idea for sure.

The devs also improved zoom out and showed us how the God Wars dungeon looked on mobile, with the cleaned up layout. You are able to see far more of the world with this new design, and it has a more “mobile game” feel to the action buttons and inventory. I really appreciate this, because it felt very hard to see the game sometimes, and that’s not what you want. Finally, the developers announced that “Early Access” is coming to RuneScape Mobile. Soon enough, they will uncap the Beta and re-brand it as “Early Access” so that anyone with a Membership can enjoy this mobile version of OSRS.

This is a pretty heavy load of announcements, but I have to say, my personal favorite is Archaeology. There’s just something cool about being a wandering, adventuring badass who picks up ancient technology and puts it to use. I’d kind of like to see some of that stuff have a chance of misfire or failure; that is until it happens to me, then I’d be furious. Hey, I’m nothing if not honest. Jokes aside, it’s a lot of really interesting features, and 2020 looks like it will be a bright one for the classic MMO.