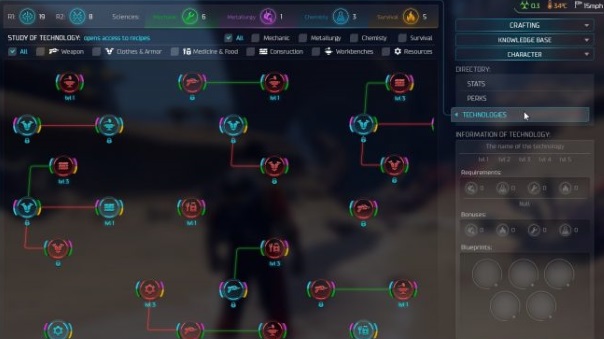 The harsh, unforgiving world of Population Zero will not be an easy one to survive, and so they started a series of articles on the game’s mechanics. The first one is particularly focused around the growth of the player character, seen here. Character growth, obtaining new knowledge and skills is broken down into several major systems:

Exploration of the world is key to learning about the world itself, and the objects found therein. Players will navigate and interact with Kepler’s ecosystem, and not expanding your knowledge base will make this task increasingly difficult, if not impossible. This knowledge is distributed along the science atlas and converted into skills and tools that will let the player survive a bit easier. There are also perks that you can obtain, depending on what activity you are working on. EG: if you constantly chop wood, you will get perks like <<More Wood>> and <<Axe Wear Depreciation Reduction>>. You will also be able to learn the weaknesses of animals and be able to farm resources from them easier, by concentrating on hunting those particular animals.

The same mechanic is applicable to PVP-perks. Evolving your character with a view to increasing output damage and new combat skills obtaining will give you a certain advantage in PVP fights. It’s important to mention that you will be able to get absolutely new combat skill which you cannot obtain any other way. They do wish to see individual skill as a crucial point in battle with other players, not the evolution level of the character. They also want to talk about mutations and augmentations that will be seen on Kepler, but that’s for another blog. Interested players can also click that link below to sign up for the Alpha/Beta, and learn more about Population Zero.