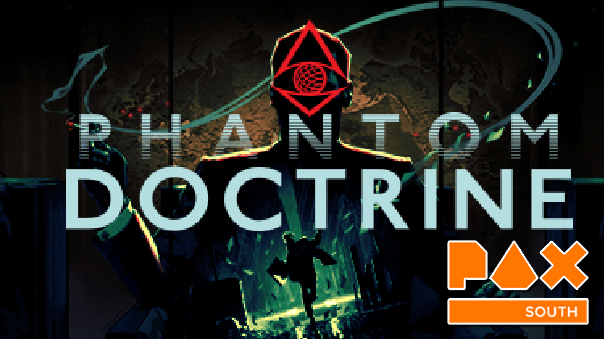 Easily the smash-hit surprise of my PAX experience has been Phantom Doctrine, a relatively unassuming top-down turn-based tactics game with a stylish 1980s Cold War espionage theme. While not particularly eye catching in visuals or gameplay, just a few minutes with the game and you’ll quickly see why it’s so incredible.

First and foremost, Phantom Doctrine’s primary strength lies in the thousands of little decisions that go a long way in making a seamlessly enjoyable experience for the player even if it forsakes realism to achieve that goal. For example, one of the things I’m most giddy about is in the almost complete removal of randomness. No more missing shots a tile away with 95% accuracy! Instead, your shooting, and by extensions defense against it, operates on a slightly tricky to comprehend awareness system. Admittedly by the end of my 1-hour demo I was still a bit confused about how it works, but I think it operates something like this: your awareness is the resulting number based on every action that particular character has been apart of both good and bad. The higher the awareness, the better equipped that character will be dealing with a variety of situations. So let’s say Agent Firebird sneaks around and plays it safe being careful not to raise suspicion or sound an alarm, well, his overall ability to be proactive and reactive will be much higher than another agent who has been in countless firefights and teetering on the verge of death. In fewer words, you’re rewarded for playing optimally. In addition to awareness, things like cover, weapon range, armor, and character ability will affect the overall damage. Ultimately however, if you can hit, you will. No exceptions.

Although the revamping of a relatively minor system seemingly has a small impact, your gameplay as a whole will be immediately more satisfying and strategically interesting. Personally, I will never be able to go back to XCOM again after experiencing the joy of being unshackled from RNG. And while I focused particularly on the random hit chance in a firefight, that’s only one of many implemented mechanics taking steps to respect the player’s ability and time. Another example: instead of forcing the player to painstakingly canvas an area a few tiles at a time, Phantom Doctrine allows each character to utilize up to three actions a turn. This will allow you to explore the map at a brisk pace while avoiding running right into an enemy ambush.

Smart game design aside, the missions are generally fairly simple and straightforward. One potential objective is simply to eliminate an opposing agent. Another would have you complete a sequence of tasks such as disrupting a communications device. Needless to say, since this is a deadly business to be in, losses are inevitable. In fact, you do not need to have any of your agents left alive to successfully complete a mission.

Taking some inspiration from the Hitman series, you’ll be sneaky and sabotaging your way to crippling the conspiracy industry. The scenario I took part in had four members in my squad of immensely talented individuals, one of which had a disguise prepared. This disguise allowed that character in particular make movements and take actions in restricted areas unimpeded. Granted, my other units could move into restricted areas, but being seen by the enemy would sound an alarm. Further operating under the cover of stealth, enemies could be dispatched quietly and hid away so they would not be found. Should they not be taken out, they would maintain a vision cone over certain areas and follow patrol patterns should their turn come around. Then, by exploring and freeing up the map one guard at at time you would be able to move around freely completing objectives or locating a target. All the interactive mechanics therein are intuitive and straightforward and quite reminiscent of Hitman should you have played it before. Amazingly, I was told you could complete the entire game without ever raising an alarm or engaging in a firefight.

Of course, if a mission goes bad, or if you in general choose to ignore stealth entirely, the action plays out in a manner similar to XCOM minus the randomness. Walk around, talk cover, go into overwatch or shoot baddies – rinse and repeat. Super simple stuff.

Eyes All Over the World

The other half of the game lies in the overarching leading of your rogue unit operating under the belly of an international organization with endless money, information, connections, and supplies at their disposal. Fighting against them won’t be easy, but you must strike them down and release their suffocating grip on the world.

Aside from assigning and taking part in ground missions, you’ll also manage a roster of agents in variety of ways including manipulating their stat attributes, specializations, weapons, items, roles, assignments and more. Similarly, as you gather intel from across the world you’ll be able to view and connect it on a cork board eventually discovering the location of your next mission. However you don’t really have to get into a lot of these mechanics if you don’t want to. They assist in the immersion and min-maxing aspect, but what matters at the end of the day is the smart macro choices and tactical decision making in missions.

Phantom Doctrine isn’t just fun and interesting, it’s on a mission to trash conventional gameplay mechanics in favor of putting the player’s enjoyment at the very forefront of the experience. I have only a single complaint: this game won’t come out until later this year.