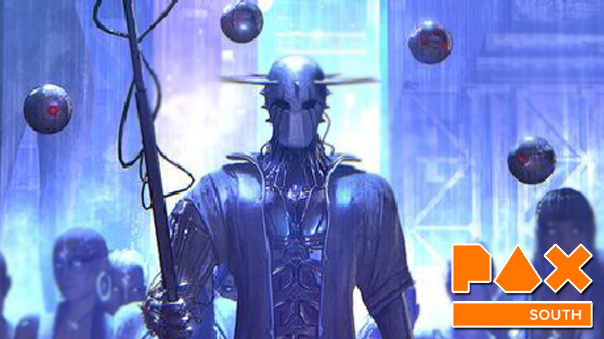 Taking inspiration from the winning formula of Starcraft’s single-player campaign and layered with a mature science fiction theme, Re-Legion has us control a charismatic and ambitious individual on a journey to save the listless people around him with the power of religion, although, he himself is not impervious to the temptations of power…

Upon loading up one of the many missions, you’ll start by immediately converting your first lackey into a follower. From there, they can be upgraded into a variety of niche-fulfilling units, but to start building up your army they’ll initially be a warrior grunt. But one lonely follow isn’t enough, the influence must be spread further! Convert the next follow you come across into a preacher whom will add new members to your cult passively while you, as the prophet, conquers other areas of the map. After the initial base build up, the cycle of explore, attack, and convert begins. Every time you discover a new area various new things will be waiting for you including enemies, potential allies, or sometimes a structure to capture for your own. Though a lot to take in, most everything fills a role as seen in many other RTS’.

While looking like a slice of gorgeous cyber noir in look and feel, I can’t deny not a whole lot of gameplay innovation is happening here. Just about everything I ran into was, “Do they have this mechanic? Oh, they do, nice.” That’s not necessarily a bad thing, but something to note. I love the Ghost in the Shell and religious influences both in the visuals and in the deeply rooted gameplay, but for the most part you won’t be doing anything genuinely novel or unique.

By extension, the overall vision of the game is thankfully unambitious. The prevailing feeling that I got from my short time with the game and from chatting with the developer was that they wanted to give the player a fantastic narrative-driven single player campaign detailing the rise and fall of a man with humble and righteous motivations. But, hey, there will be a well-balanced multiplayer mode if you’re into that sort of thing.

Look for Re-Legion around the $25 dollar price point on Steam sometime this year.