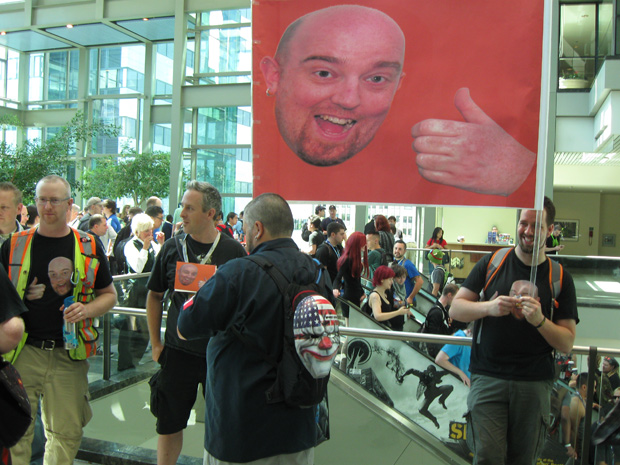 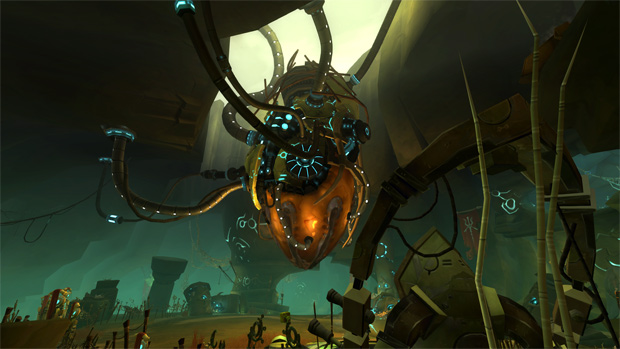 Now the hidden WildStar demo is something to talk about. You want mind blowing, original, keyboard smashingly challenging end-game content? Boy oh boy is Carbine Studios bringing their A-game to deliver. We witnessed a wind enemy themed dungeon known as Stormtalon, presented by none other than Stephan Frost, voice behind the widely popular DevSpeak video series. So let me break down some functions of the demo that sets it apart. 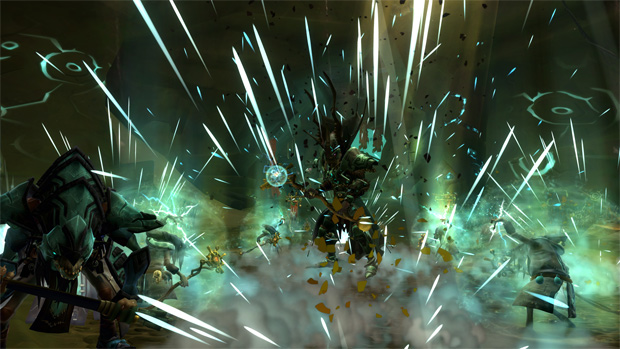 Cinematics – This team has some professional editors working behind the scenes. When you’re running a dungeon, you won’t ever feel like you’re just going on a loot treadmill. Well at least not on the first time as the story progresses with beautiful voice acted cutscenes offering close ups of the baddies’ armor sets. I’m sure the animators love it because with how intense the ensuing fights are, you’d probably never get the time of day to get up close enough to marvel at them otherwise. 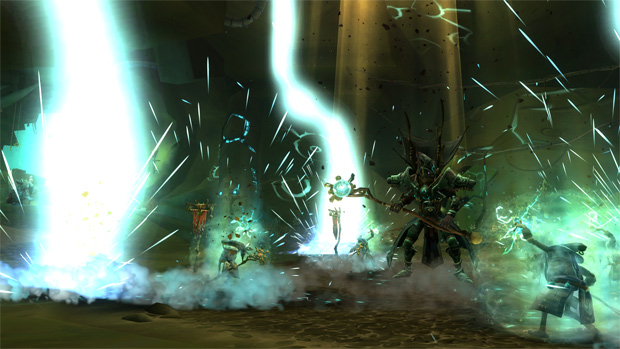 Tells – By now everyone is aware of the ridiculous tells WildStar has. Some even scoff at how simple they seem to make dodging attacks in combat. Well for those people, wait till you see a boss battle in action. One particularly nasty guy sent tornados zig zagging across the map that didn’t just deal damage, but sent you flipping into the air to remove your presence from combat for a period of time. And when the boss gets serious, these same tornadoes will start to home in on you, making hit and run dps all the more important. 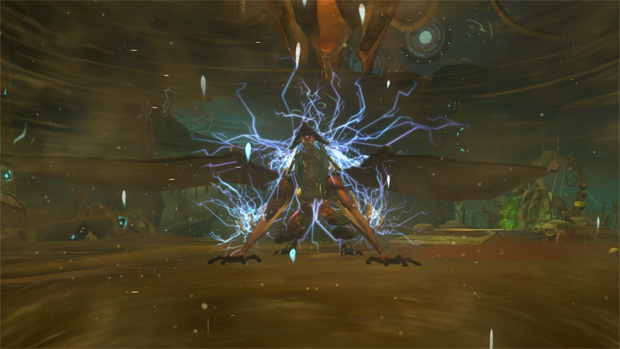 A second boss would literally fill the entire room (and it was a biiiig room) with attacks with only minor openings between each massive rectangular box that you’d be hard pressed to even fit a Granok inside of. The entire room would then explode in flashing lights and lightning about 3 seconds later, making the purpose of the tell not so much a guide of how to avoid damage, but more just a symbol of despair as you realize there’s no way you’re getting out of the way in time. 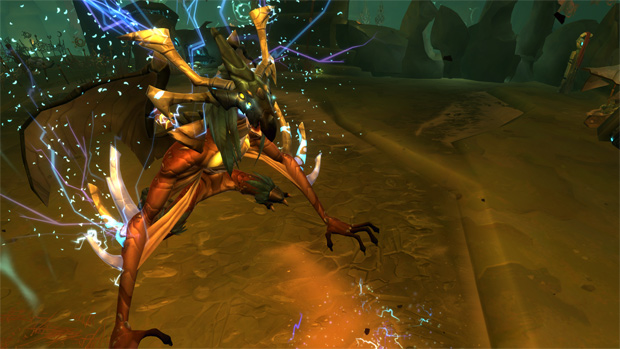 In another instance the final boss, a massive wind dragon, flapped his wings to fill the entire arena with a vortex of hurricane force that would quickly tear any player apart that was unlucky enough to find their way inside. Now the trick is there would be an eye to the storm based randomly on one of the players in the group. Which you imagine wouldn’t be too bad once everyone stands next to that player. But no no, Stephan doesn’t believe in “Cigarette Smoke” boss battles. If you can stop to chug a beer or take one hand off the keyboard to light up your cigarette, you obviously aren’t playing his title. 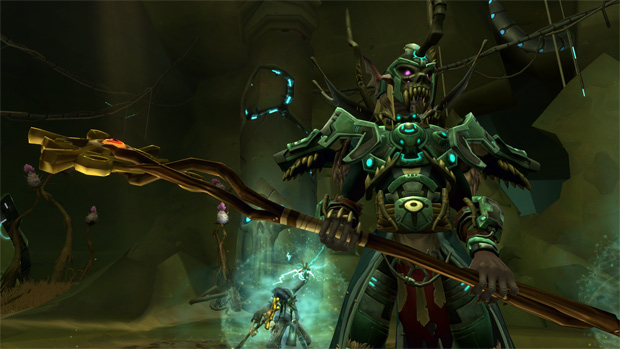 So the single player that the safe spot is focused around will then have a tracking lightning bolt placed on him with varying lengths of time before it strikes. Just before the spell hits, it will stop tracking that player, giving him or her a brief opportunity to jump to safety. And this spell hits roughly half of the safe region in the eye of the storm, making it pretty challenging to stay in the safe spot between the outer winds and the inner bolt of lightning. Even more so if you’re not the chosen player, and end up forced to dodge and follow his movement to save your own hide. Somewhere in all of this you’ll also need to keep the pressure on the boss or the war of attrition won’t end in your favor. 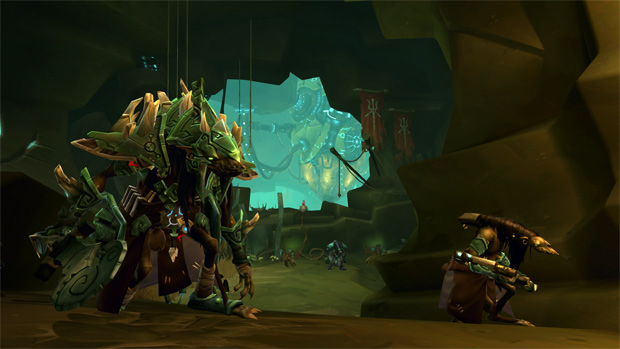 Progression – The last element of these dungeons that makes them so epic is the way they play out. Again, it’s very cinematic feeling. You won’t be able to fall into a pattern of attack combos that macro keys can do for you. You need to be active and reactive, utilizing everything you’ve learned about the game in the past to on the fly figure out how you’re going to survive the present.

A great example of this is the tornado boss. After hearing him ramble on about what useless worms you are till he’s tired of hearing himself speak, the entire party will be blown back against a wall. The boss will then begin channeling an unavoidable kill shot blast to wipe your party. Now you won’t know this on your first run but when you see the Dragon Ball Z style energy orb he’s channeling and realize there’s no tell showcasing an incoming attack, you might start to worry and feel a sense of urgency. 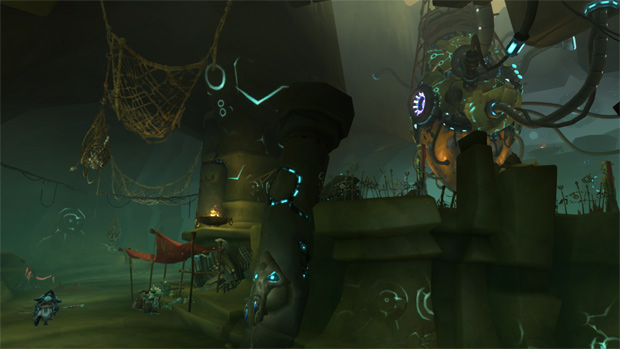 Yet the helplessness plays a factor in this puzzle as well since he’s channeling your doom on the other side of the room. So your entire team needs to haul ass through a maze of moving tornados to get back to him and churn out the deeps. And even if your whole team manages to do so without incident, then the tornadoes all follow you back to him, forcing you to constantly be rolling and juking.

And if you think this content will get stale or monotonous once you’ve figured out the pattern, Stephan promised that multiple versions of each major dungeon will exist and rotate on a weekly basis. So their players will have quite the chore of mastering all its variations to be able to run through it. He also delighted our small room of press when he announced that they have no intention of ever nerfing the difficulty of their dungeons due to community members crying that it’s too hard. WildStar is meant to be hard and the only method of lightening the load will be collecting the best gear to up your own strength versus the content you’re facing.

While the demo we saw was impressive, and the 3 second glimpse of upcoming raids even more so, Stephan promised that they have a 20 minute detailed look at this wind dungeon in the works. So keep an eye out for that as it’s worth grabbing some popcorn and enjoying without distractions! 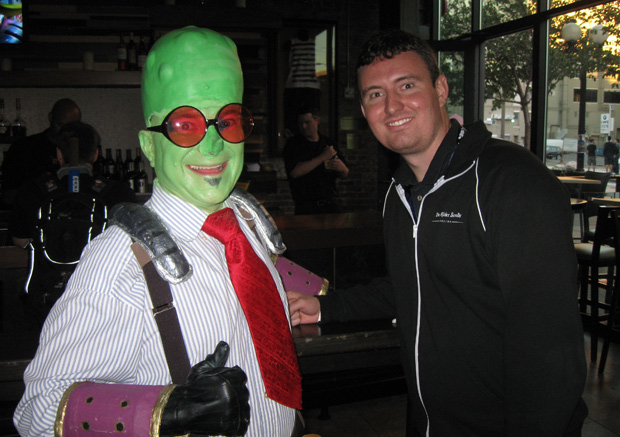 Oh and small note, Carbine Studios’ party at the Hard Rock Café was fantastic. Most of the directors of the company didn’t even spend time in the VIP reserved area but instead were commonly seen dishing out tons of info to large crowds of fans in attendance. That and 2 free drinks for a party open to the public? If you’re planning to attend a gaming convention and Carbine is there, I absolutely recommend hitting up their future parties.