I was privileged to be the first person to see a new mount in game! (Even some of the other developers didn’t see it. It pleases me to be the first.) The Celestial Unicorn was gorgeous! Easily the coolest mount I’ve seen for ArcheAge. Complete with golden barding, this will be available one of two ways: Through Loyalty Points (600), or from a supply crate. It is beautiful, and it makes me want one, but I collect mounts in every game I play. This was just the first of the wonderful things the ArcheAge crew showed me.

Next Tuesday comes the “Secrets of Ayanad,” and the Diamond Shores Zone, which is a zone that, depending on the “State of War,” can either be full PVP or no PVP. The zone transitions through phases to war and peace, creating quite the exciting event for players. A new housing zone is also available with up to 200 homes to be purchased. One thing that has come of their economy was actually not planned on by the developers. The community has created its own middle-man system where players can politic for a home that belongs to someone else, and depending on how that middle-man works, you have a public reputation on their forums! That is a fantastic way to see a community grow and evolve, creating something so intricate.

The Library itself is a public dungeon, where multiple groups of parties can enter at their own leisure and explore and fight content, but there is no PVP here. The devs decided that to avoid the potential (and horrifying amount of) griefing that could happen in this zone, they made the outer area, Diamond Shores, PVP but not the interior. But you do have to fight for content, a’la Everquest or Final Fantasy XI, so there is plenty of challenge. There are three floors, laid out in a chessboard pattern. There are about 64 rooms to encounter, and work together as varying groups or not, the choice is yours!

The library itself is varied in how it looks, from level one being a simple cluttered, battered library, to floor two resembling a Botanica, beautiful flora overrunning the place. Each room seems to defy the physical limits of the library. This becomes more apparent on floor three, where you can see the stars themselves, the entire cosmos painted for you as an ethereal existence over your head. As you explore this place you will find that it exists between dimensions, defying the laws of reality itself. As you slay enemies here, you may find that orbs drop for you to pick up. These are a type of currency that will let you enter an instanced dungeon-within-a-dungeon. This will resemble Gears of War in that you’ll be tested by massive wave after massive wave of enemies to claim your rewards 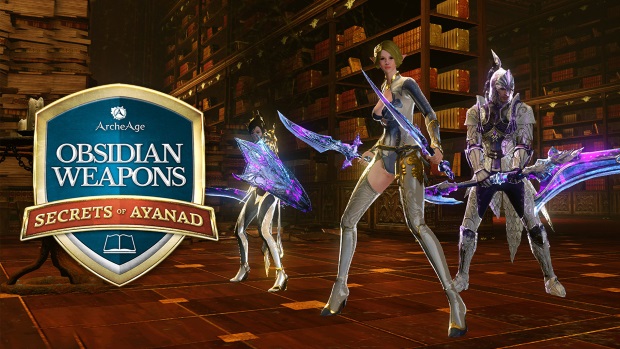 New equipment types can be created as well, in Obsidian and Ayanad gear. To create your first piece, an obsidian weapon, you go through a quest chain that rivals the World of Warcraft legendary questlines; expect it to take months of your time, but boy are they worth it! Ayanad equipment will likely come in a similar way. This gear can only be attained on the Diamond Shores as well. But that is not the only addition coming in this content update! Level 50 to 55 will happen on the Shores and a skill point increase (23 to 28) will help players create the most diverse and powerful builds imaginable. Look for all of this on March 10th! The ArcheAge crew isn’t done yet either. Patch 1.7 is being worked on as well with additions to ship mechanics, and more customization options. Be on the lookout for this amazing update to ArcheAge!