Students Battle for Free Tuition in Heroes of the Dorm Tournament 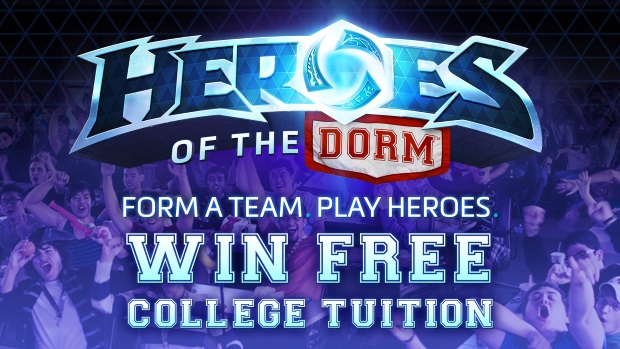 Wrap up that term paper, because you’ll want to hit the battlegrounds with no distractions. Today, Blizzard Entertainment and TeSPA revealed plans for Heroes of the Dorm™—the ultimate Heroes of the Storm™ college tournament, offering an unprecedented prize pool where the winning team will receive free tuition for the rest of their college career. Currently in closed beta testing, Heroes of the Storm is Blizzard Entertainment’s free-to-play online team brawler featuring iconic heroes from more than 20 years of the developer’s rich gaming history. ESPN, the worldwide leader in sports, will deliver exclusive live coverage for Heroes of the Dorm on television and digital platforms. This represents the first live televised coverage of a collegiate eSports event on an ESPN network.

Heroes of the Dorm will bring together teams of college students from across the United States and Canada in an epic showdown to determine the strongest scholars in the Nexus, with hundreds of thousands of dollars in tuition at stake. Every competing team will get access to the Heroes of the Storm closed beta test in order to participate. Plus, everyone’s invited to show their school spirit—and compete for prizes of their own—by participating in the Heroes of the Dorm fantasy bracket challenge.

“College sports do great things for student athletes—they help pay for schooling, build teamwork and communication skills, and create lasting memories,” said Mike Morhaime, CEO and cofounder of Blizzard Entertainment. “We believe eSports has the same kind of power, and this tournament aims to bring positive experiences like these to college gamers. We can’t wait to fill out our fantasy brackets and cheer on a new generation of eSports athletes as they compete in Heroes of the Storm.”

The Heroes of the Dorm tournament is open to active college students in the United States and Canada and will be played across three rounds of competition:

· The Heroic Four live event to be held in late April

All five members of the first-place team will each enjoy up to $25,000 per year in college tuition for their remaining years of undergrad or graduate enrollment (up to three full years as an undergrad or up to two years as a grad student). Seniors and grad students with no remaining years of enrollment will receive one year’s worth of tuition to help repay student loans (or an equivalent cash prize if the student does not have any remaining student loans). Each player whose team emerges from the Round of 64 and makes it to the Heroic Four will take home a top-of-the-line gaming PC and officially licensed Heroes of the Storm peripherals and accessories.

ESPN3 will carry the Round of 16, Round of 8, and “Heroic Four” live exclusively on the multi-screen sports network. It is accessible in more than 99 million households nationwide to fans who receive their Internet or video subscription from an affiliated provider. The network is also available at no cost to approximately 21 million U.S. college students and U.S.-based military personnel via computers, smartphones, and tablets connected to on-campus educational and on-base military broadband and Wi-Fi networks. The coverage will also be available across ESPN media platforms in several international regions.

Viewers will be able to access Heroes of the Dorm tournament action on ESPN3 under the eSports category online at WatchESPN.com, on smartphones and tablets via the WatchESPN app (visit http://espn.go.com/watchespn/apps for a list of compatible devices), and streamed on televisions through Apple TV, Roku, and other connected devices.

In late April, the Heroes of the Dorm championship match will be televised live in prime time on an ESPN network and also accessible via WatchESPN. Further details on the telecast will be shared at a later date.

“Heroes of the Dorm presents an exciting opportunity to once again work with Blizzard, a leader in the games industry,” said Raphael Poplock, Vice President of Games and Partnerships, ESPN. “By delivering the tournament to an audience of gaming fans in the US and beyond, we are able to experiment with new formats and programming across our networks.”

To sign up, students should form a team of five players and register by visiting the official Heroes of the Dorm website, heroesofthedorm.com. Complete rules and eligibility requirements will be posted there as well.
Fantasy Bracket for Everyone
The Heroes of the Dorm tournament isn’t just for collegiate competitors—spectators can also create and share fantasy brackets to root for their favorite teams and partake in an epic prize pool valued at more than $25,000, including a $10,000 top prize for whoever predicts the final bracket most accurately, and top-of-the-line gaming PCs for the best five predictions. In addition, everyone who participates will receive a Heroes of the Storm in-game portrait, as well as opportunities to win high-end gaming PCs and a range of gaming peripherals. Check the Heroes of the Dorm website for complete rules and eligibility. Fantasy brackets will be available there starting on April 3.