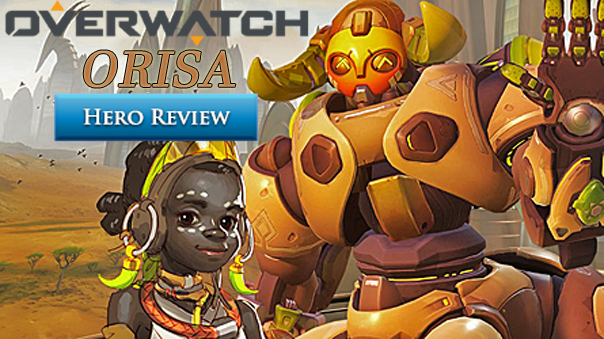 Ah, Overwatch. A game I was hoping to pump hundreds of hours into until something called school got in the way. My quest to climb through the ranks and have some fun with this amazing game got delayed for months while I work through my final year of university. For this reason, whenever Blizzard announces a new Overwatch hero, I can’t wait to get my hands on it. Using writing this article as an excuse, I can make some time for myself to sit back and play a game I truly enjoy. Read on to learn more about Orisa, Blizzard’s latest addition to the Overwatch roster.

Eleven-year-old, Efi Oladele, a brilliant girl whose early accomplishments in robotics and artificial intelligence had already earned her the Adawe Foundation’s “genius grant,” worked to create Orisa as a means of protecting Numbani. She spent most of her grant money to acquire one of the decommissioned OR15 bots and created Orisa, an upgraded OR15 with a custom-made personality core. Now, Orisa works to protect those around her. “Your safety is my primary concern.”

Orisa is a medium difficulty tank hero who serves as the central anchor of her team. She protects and enhances her team using her barrier and supercharger. For her to excel and do the most for her team, she must remain close to her teammates and amid the action. As a tank hero, she can soak up a ton of damage but only deals a decent amount. Like Reinhardt, the team must base its position around Orisa to make optimal use of her abilities and contributions to the team.

She fights with her Fusion Driver, an automatic projectile cannon that dishes out sustained damage but slows her down while firing. I was instantly reminded of the Heavy’s machine gun from Team Fortress 2 when looking at Orisa, but unfortunately her fire power is comparatively baby (Only TF2 players will understand…). The weapon has a decent amount of spray but is still reliable from afar; simply aim at the head to deal a good amount of damage – not bad for a tank! Fusion Driver’s alternate fire, Halt!, launches a graviton charge that slows and pulls in nearby enemies. This sphere detonates when it hits the ground but can also be manually detonated by firing again.

While, obviously, not as strong as Zarya’s ultimate ability, Halt! is still a very good ability that can be used to setup kills for your team or disrupt enemy positioning. You can use it to catch slippery heroes such as Tracer or pull in enemies to make landing a hook easy for your team. Or… pull enemies with Tracer’s bomb attached to them towards their team for easy kills!

If you thought Lucio’s push was annoying…

To keep herself and her team alive, Orisa can make use of Fortify to temporarily reduce damage taken and prevent her from being stopped. She can also toss down a protective barrier that protects her and her allies from taking enemy fire. This is a great ability like Reinhardt’s shield but is not restricted to living in front of her – she can throw it out where she pleases. This makes it great to protect specific areas without restricting Orisa’s movement and can even be tossed in front of annoying heroes such as Bastion – rendering their barrage of bullets useless.

I love how you can pull in objects too

Finally, her ultimate ability, Supercharger, causes Orisa to deploy a device that increases damage done by nearby allies for some time. All nearby allied heroes will deal 50% more damage while this device is deployed. That’s huge and it lasts for 15 seconds! Now, you may think this is quite broken as the duration seems too long. You’re right, that’s why this device can be destroyed if it takes too much enemy fire. For this reason, it is important to focus down an enemy Supercharger quickly and to toss out a protective barrier on your own Supercharger. It is also a good idea at times to Fortify yourself and soak damage from Supercharger and your barrier to let it stay alive as long as possible. Keep in mind, you are an anchor tank and should be looking out for your team more than yourself.

Bringing these abilities together, Blizzard has truly created a strong anchor tank. If teams are smart and play around their Orisa, they can successfully defend and capture objectives. She feels stronger on defense but can still do a good job on offense. Players used to playing around a Reinhardt will not have much trouble getting used to playing with Orisa – although Halt! may initially mess with your game if you don’t expect enemies to get pulled away.

As Orisa, it is important to keep the health of your team in mind. You should be working to keep yourself and your team alive for as long as possible. As a tank, dealing damage should not be your primary concern – leave that to your offensive teammates. Continue to toss down Protective Barriers, picking away at enemies with your Fusion Driver, and setting up kills with Halt!. Call out to your team before you’re about to drop down your Supercharger so that everyone is ready to deal some insane damage and be sure to use it when your team could use a damage boost – it’s never good to just hold on to your ultimate abilities forever.

Orisa is a strong tank hero that can prove to be a valuable asset for her team. If players remember to prioritize their team’s health at the same level as theirs, they will have no trouble getting used to Orisa’s playstyle. I am normally not a fan of tank heroes as my playstyle in all games is to fight from afar and keep myself out of dangerous situations. However, those players that love being in the midst of battle at all times will find themselves at home with Orisa. Her playstyle revolves around acting as an anchor for her team and living amid battle.

Season 4 is also kicking off with a bunch of promising changes. Blizzard continues to work towards improving the competitive experience by ensuring that players only attain ranks they deserve. It is now harder to drop to the lowest ranks and attain the highest ranks with ranks near these extremes remaining hidden. Additionally, you cannot simply hit top 500 once and guarantee receiving the icon on season’s end – you must maintain this rank now! Also, skill decay is even more extreme now. If your skill rating is above 3000, you must play at least 7 games per week to keep this rank. This seems a bit high to me and is likely to be adjusted in the future but if you are really into the game – how much is 7 games, really?

Finally, suicide defending is now punished. If the enemy team has majority control over a point, you cannot just keep running to the point to delay the inevitable. Doing so repeatedly will now increase the respawn time of the defenders. This is a nice change to see as delaying the inevitable can get annoying but it may lower the number of comebacks we see. However, when you are forced to suicide one by one onto the defense point, there is a low chance for a comeback anyways. Overall, this is a nice change to see.

Once again, Blizzard does not disappoint with their latest update. Orisa is available on the PTR, and being a public test realm, you can go and try her now without needing any key! I’m looking forward to future hero releases and maybe even playing the game more in my free time once school wraps up!