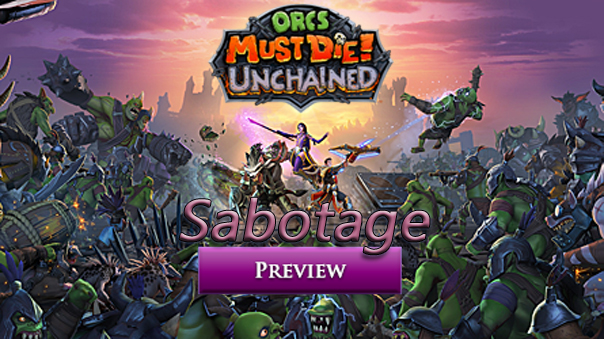 Alright guys, it’s time to talk about a truly magical franchise: Orcs Must Die! Specifically, Orcs Must Die! Unchained for PC. It’s a game that has truly gone through a considerable amount of change since we first started looking at it around the Alpha phase. Robot is a company that consistently listens to their audience, because they understand that those are the folks that are going to be playing, enjoying, hopefully spending money on their product! And what better product to spend hours and hours on than what I’ve dubbed a “Puzzle Solving/Murder Simulator.” In OMDU [boy, that’s a lot easier on the ol’ keyboard!] you set up what deathtraps, killways, whatever you want to call them; it’s a corridor where you apply a host of horrific traps that you’ve carefully spent time funneling the enemy down, forcing them to wander headlong into violence. Enemies have pre-programmed routes they’ll run down for each path they can enter the map on, and it’s up to you to pay attention to it, and funnel them the way you want them to go. It’s magical to watch all your traps start whirring to life, obliterating anything that wanders in. There’s something…special about it. Even better when you’re playing as a champion/character that can reset traps! 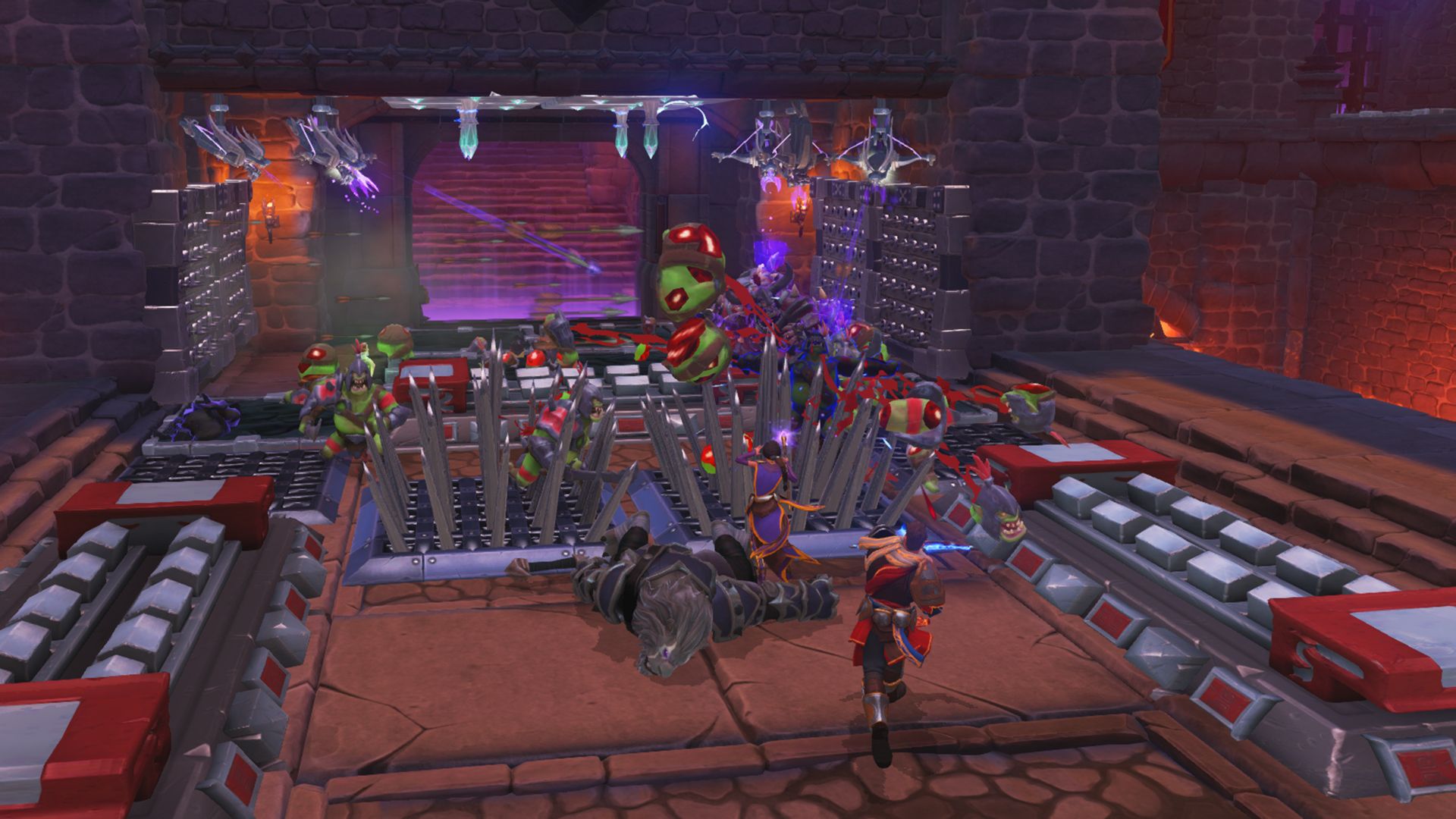 So, we’re talking about change. Originally, OMDU was built around a Siege Mode, one that I’ve gone on record before and said that I absolutely detested. Not because it was PVP, but it was just too much going on at once. It was stressful and I did not have fun. I have more fun with OMDU when it’s just me versus the NPC hordes. You had two teams that fought each other with hordes of enemies and traps, and there were still the players to deal with… It was like a more complicated DOTA 2 or League. More complicated than DOTA! That’s not a concept that gives me anything but grief or heartache. But I wanted to love it. I do love the concept. I’m a competitive person by nature, but that just maxed out my stress levels. Then the game changed again. It became far more focused on the PVE aspect of the game, while still having lots of challenge, competition in the form of leaderboards/ladders, and an absolute ton of stages, traps, characters and challenges to face. The game didn’t become easier; hell, if anything, it got harder and that’s what I want. I want to be frustrated. I want to spend time analyzing a stage, looking for new, clever solutions, while teaming up with my best friends. Once me and Colton started playing as a team in the new mode [Sabotage, more on that shortly], he got hooked, and I got hooked again. It’s like falling in love all over again. 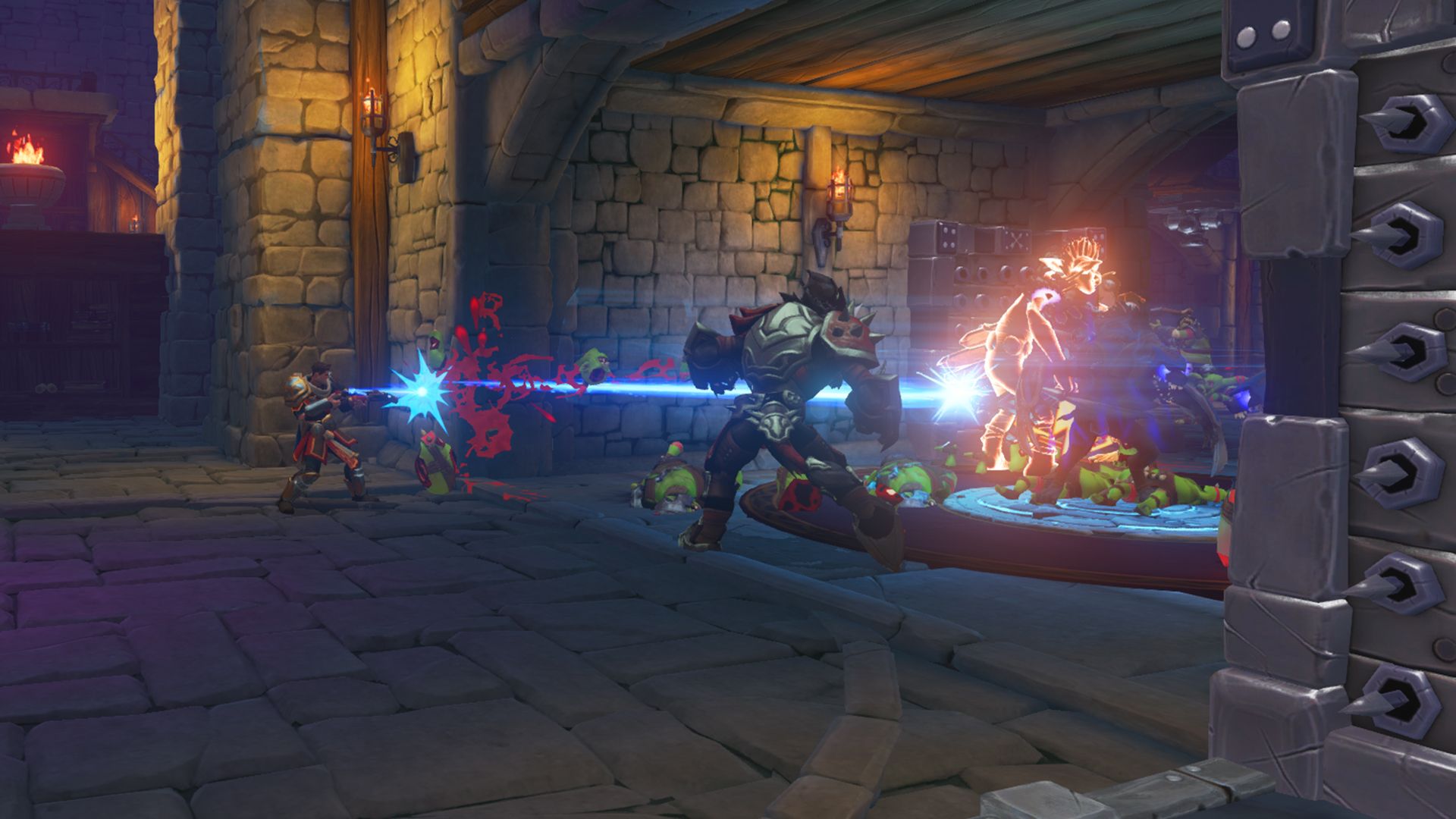 So, it was up to us. Your reigning, defending, Internet Tag Team Champions, Colton and Jason, the Bottom Tier. We went into Sabotage Mode to learn a little somethin’ about it. Colton’s going to be dropping a video on it as well, but I want to talk just a bit about it, because going from Siege to Sabotage isn’t as big a step as one might think. Well it is, in some lights. Anyway, we brought our unparalleled, unpredictable, incomparable synergy to Sabotage to figure out … just what the Hell it is. I knew something, thanks to posting videos on it, but you really have to experience it. You play a map with two to three players, and it places you in one of the traditional OMDU stages. The Baths, Training Grounds, et cetera. The stages themselves don’t change, nor do the routes from what I’ve seen. So you can go into these with knowledge, depending on how much you remember. You don’t get to pick the stage, after all. 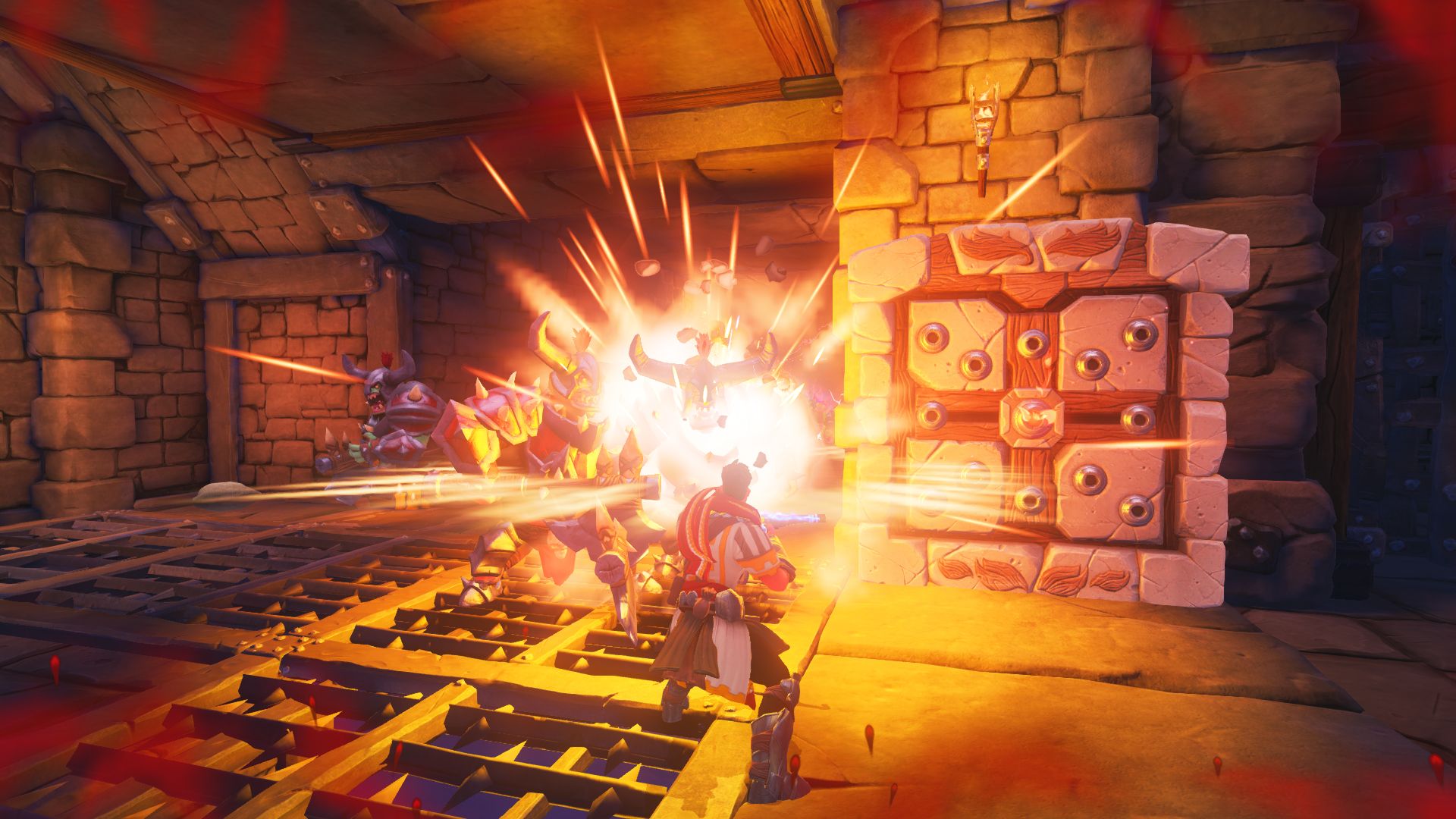 So, what’s the big deal? This isn’t anything like siege! You’re just playing OMDU! So you get additional traps to pick that actively harm the other team. Stuff like “No gold income” “Stun a random player” “Send a swarm of Elementals to punch their sister”… well, you get what I mean. You are playing on alternate realities of the same map, and your end goal is to help the other Orcs through with your own devious traps. Oh man! It combines the puzzle solving skills of OMDU with the competitive PVP nature of Siege!  They removed a large amount of the bulk that slowed that mode down, took the players off the same plane of existence, and created something new and wonderful. Because I love PVP, but I want it to not cause me cardiac arrest. 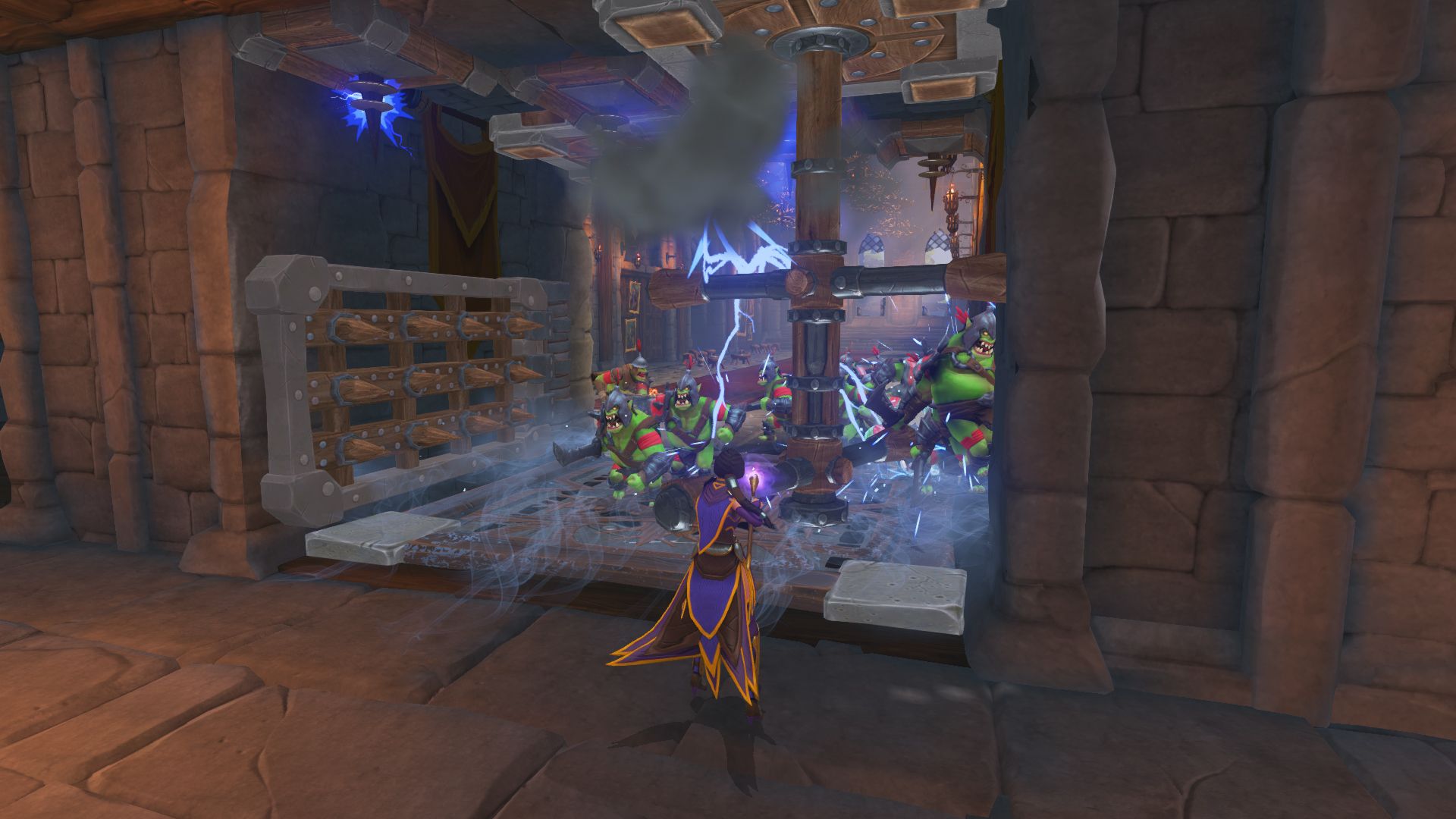 I appreciate that even the losers get new traps, but the winners do get more. We played on a test server over last week with some of the other press, long-time fans, and even the devs! Pretty proud to say we smoked SixOkay pretty hard. Sure, he may have beat us once, but we beat him next! That makes our power maximum. The purpose of having a game in Alpha/Beta Tests is to make the game become not only what you want, but what the fans want to. It means that people will likely, hopefully give unbiased, honest information on what they like, don’t like, and offer informed decisions on how to make a game grow. And when you spend so much time, manpower, and energy on a detailed, full mode like Siege was, it’s hard to just scrap it. 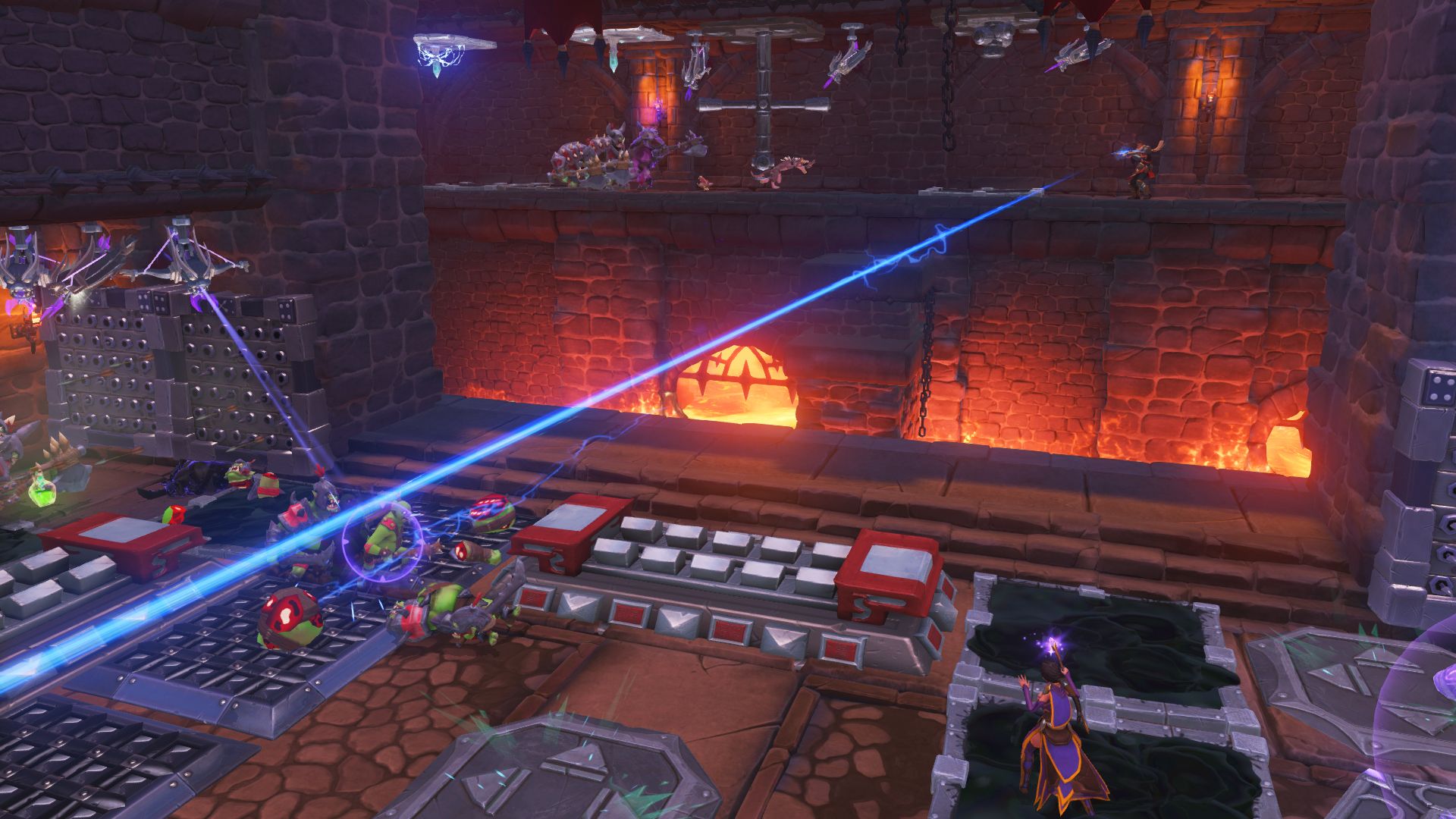 That’s throwing thousands of hours away because people don’t like it. That has to be heart breaking. It was a mode that was competitive, it kept the original idea of OMD in mind, but something was just off. It wasn’t clicking with the fans. So I feel like instead of just destroying the mode completely, they went back to work on what made OMD great in the first place. Once they had their answer, they looked for a new way to implement it that would be fun, exciting, and still be, at the core, OMD. That’s what Sabotage is. It’s a step in the right direction. The crowd wasn’t getting behind it like they thought, so a new course of action had to be taken. This is the right one. I feel it. I love this mode, and myself and Colton spent that entire night we were supposed to be streaming…well, doing this instead! I also have to say, some of the enemies you can summon and some of the tricks you can pull are just downright mean! One of the combos me and Colton used to famous success was I’d pop Invisible Minions and Kobolds about halfway through a wave. Meanwhile, he’d drop a speed totem near the Gate, so as soon as they hit it, they’d Sonic Speed through and we’d win. With the right patience, teamwork, and traps, you can do hilariously bad things to the other side, but they can do the same to you! 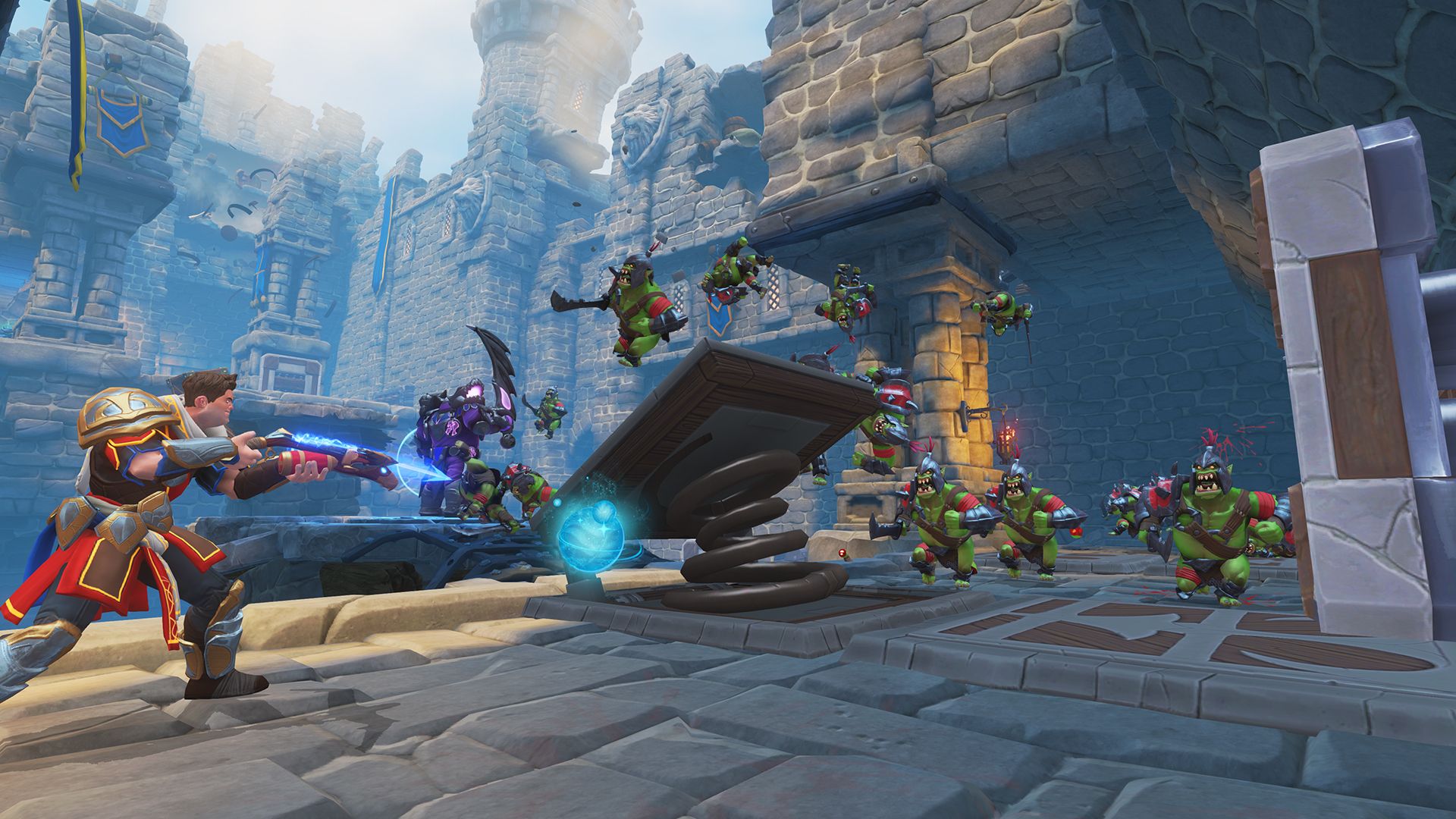 I love it. I love where this game has come from, and where it’s going. It’s been a sincere privilege to watch it grow from “OH MY GOD WHY IS THIS GAME DOING SO MUCH WHAT IS GOING ON” to “OH GOD THIS IS SO EFFING GREAT WHERE HAS MY DAY GONE!?” and it’s a fascinating experience to watch a game grow from the beginning to inception. Not all game developers treat the beta experience the same though. Some simply use it as a way to get people excited for a product that they consider “finished.” The people cry out that it isn’t, but the cries fall upon deaf ears and a mismanaged pile of crap hits Steam. They have a very active community and team that takes the data and makes actual use of it. Now all we need is an option to make private Sabotage rooms where you gain nothing, but can play just against a group of friends, teams putting their friendship to the absolute test in a game of Sabotage. It’s got all the stuff I want: Traps, a Ranking System, and piles upon piles of dead bloody orcs.

This article is sponsored by Robot Entertainment.