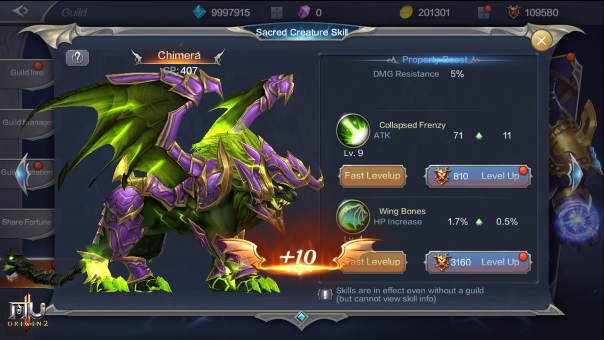 MU Origin 2 launched back on May 28th, and this latest update, 1.3 brings some new, interesting content. A new feature is the “Guild Sacred Creature”, which lets players to become even stronger by joining a guild and leveling their Sacred Creatures’ skills. There are four different Guild Sacred Creatures, and they are unlocked based on the level of the guild, and all guild members receive permanent stat boosts. The update also added a level-cap increase, a new Master level advancement, and more floors to the Infinite Tower.

A new costume feature is now available for users to customize the appearance of their character with unique looks and is unlockable after reaching level 190 and completing the Two Bits of News quest. From outfits to weapons, wings to artifacts, each costume has its own specific option. When equipped, the option is applied to the character, making them stand out among others. The new Aether system will unlock after level 280, and players will have to collect Aether dust in the Guardian Pet Ruin – this gives new combat properties to that character. There are two new Guardian pets as well – Shadow of Utter Darkness, and Eagle Fairy, both ready to join players in combat. There are also two new Mount skins – Xanthos and Balios.