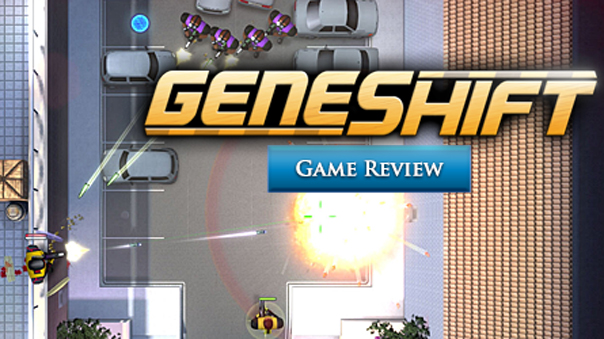 What was one of the best things about the late 80s, early 90s? No, not the music, the amazing action films, food… No, it’s the prevalence of arcades! They still existed! Sure, there are a smattering of them now, but not like we had it back then. And what came with arcades? Exciting four player beat ‘em ups! Those were, and still are, some of my favorite games of all time. Captain America, X-Men, Sunset Riders, titles like these emptied my pockets but filled my heart with warmth, happiness… violence. So that’s where we get to Geneshift. When I read the blurb about it, my first thoughts were of those old-style games. This reminds me of a top-down action game from yore, whether it’s Combatribes or NARC. The premise of the game is fairly simple on paper. You’re a Mutant. The tutorial takes you through a lab that’s been taken over, and you’re a part of the team who has to get it back. You aren’t solving puzzles or anything scientific, despite that being the setting. How do you save the day? With guns, bombs, mutant powers, and lots of violence! Despite it sounding so easy, this game brings a surprising amount of complication to the game, which I absolutely love. You know what else it kind of reminds me of? Games like GTA 2. It’s top-down madness, chaos, explosions, blood, and lots of cool guns and skills. 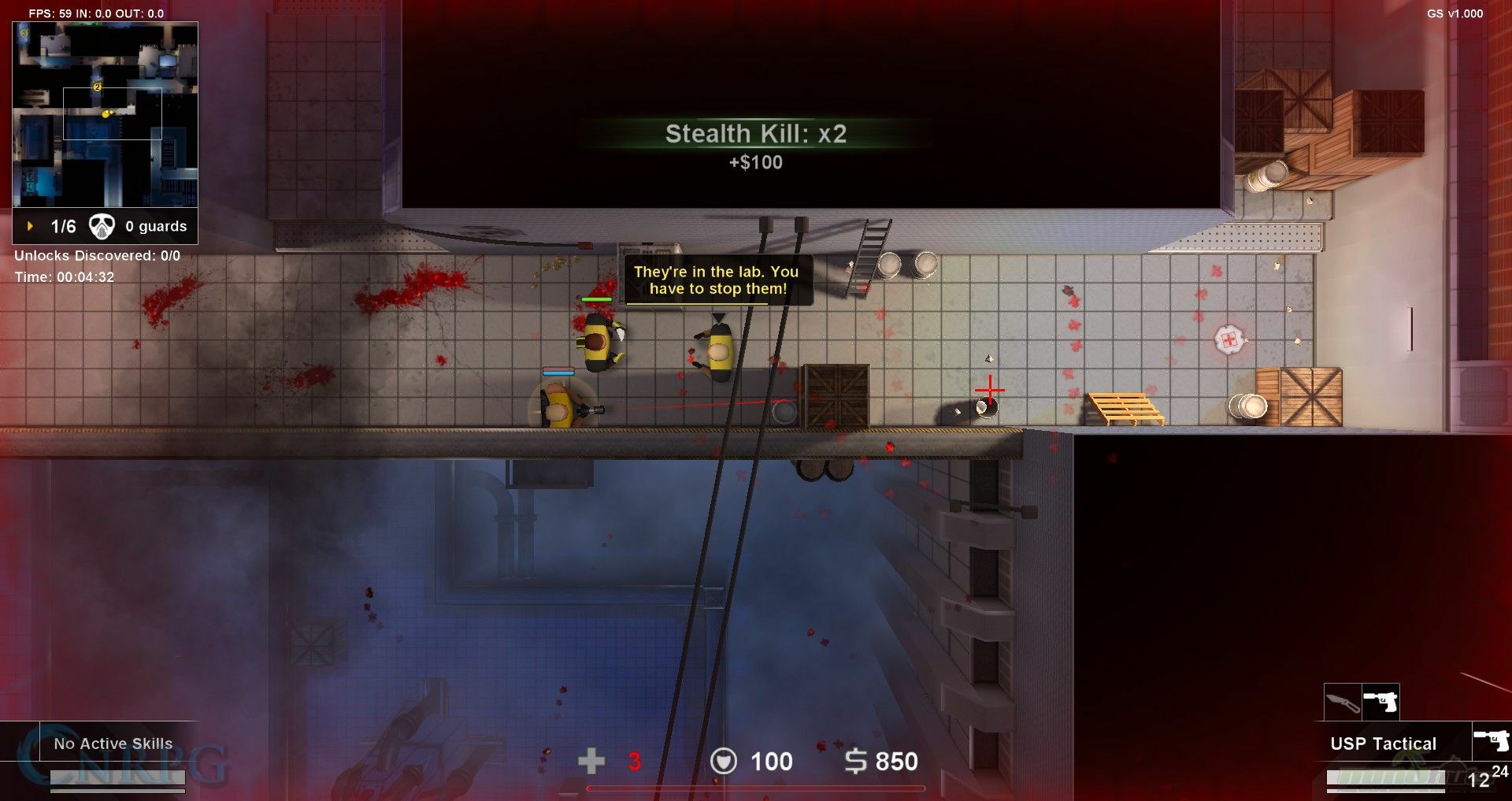 What Geneshift brings to the table is a single or multiplayer experience that is absolutely not to be missed. Up to four players can team up for the story in difficulties from Playful to Insane. The actual mechanics of these stages are brilliant. You can’t see enemies around cover/corner/buildings and vice-versa. But you can see a cone of purple light that shows roughly where they can see/shoot. You acquire your cool guns by either murdering enemies, or when you reach the checkpoints [which are bombs, funny enough], you can spend your blood money on a variety of ridiculous weapons. You do not have unlimited ammo, but you can buy ammo for your favorite weapon of destruction at these bombs. You can also get chemicals there to build your base/enhance your powers, or vehicles! Yes, you can buy a vehicle from a bomb. That kind of pulls me out of it, them being called Bombs. And being able to spend money through them. It seems like a very strange choice to me. 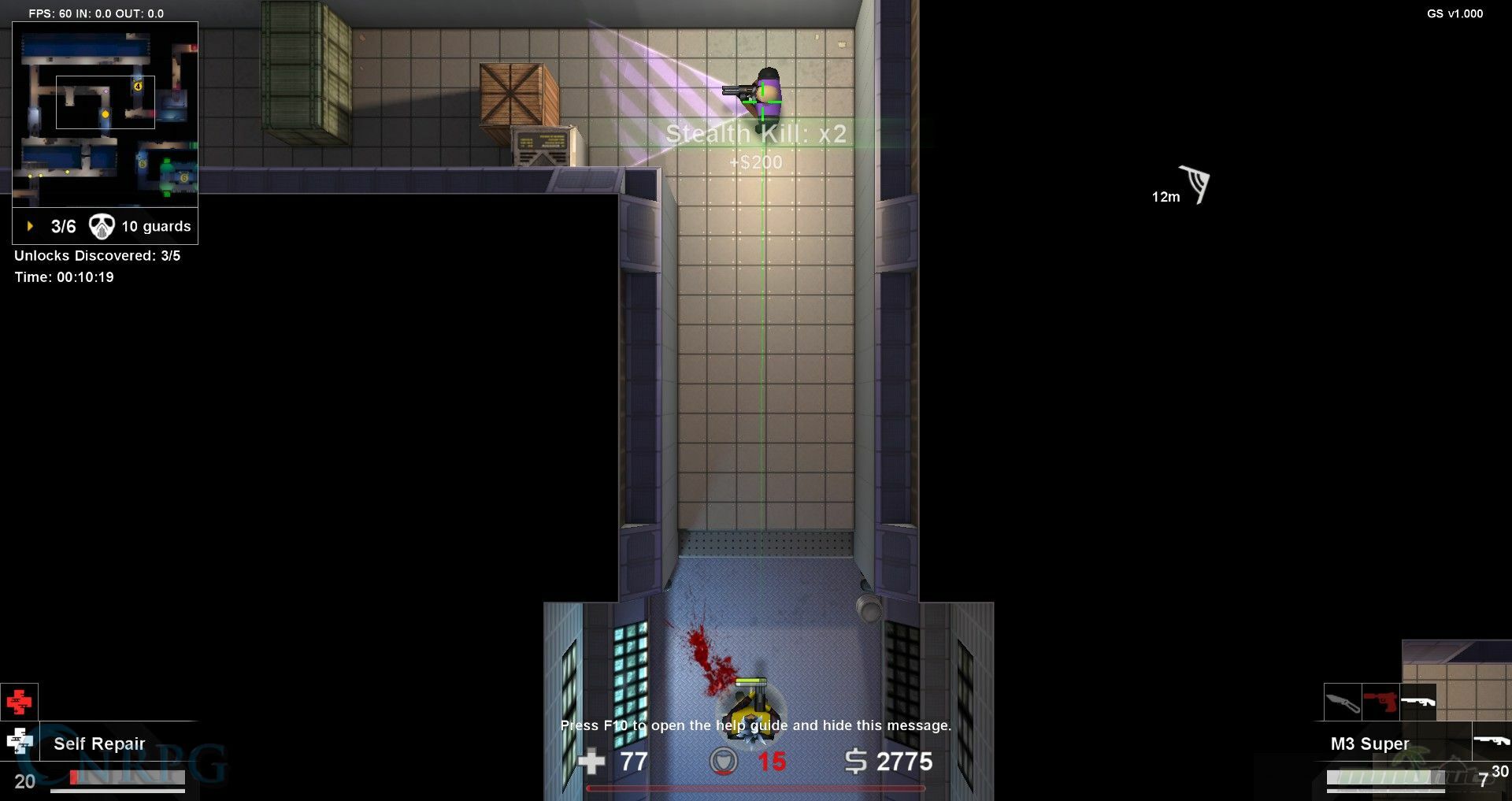 So you can’t see them in the dark, or around a corner, and they can’t see you. It’s interesting to see this in this kind of shoot ‘em up though. Guns don’t have the same range either, so at some point, when you get a sniper rifle [it won’t take long], you can scroll far, far, far off screen to find an enemy that’s not hiding, and obliterate their face with a high-caliber sniper bullet. Getting several stealth kills, or even regular kills without getting hit back also creates a combo, which means more money to buy more ludicrous weaponry! From shotguns on up, there’s well over twenty guns to bring to the table. Or you can group with friends in a pick up, do drivebys and murder folks with your incredible firepower! 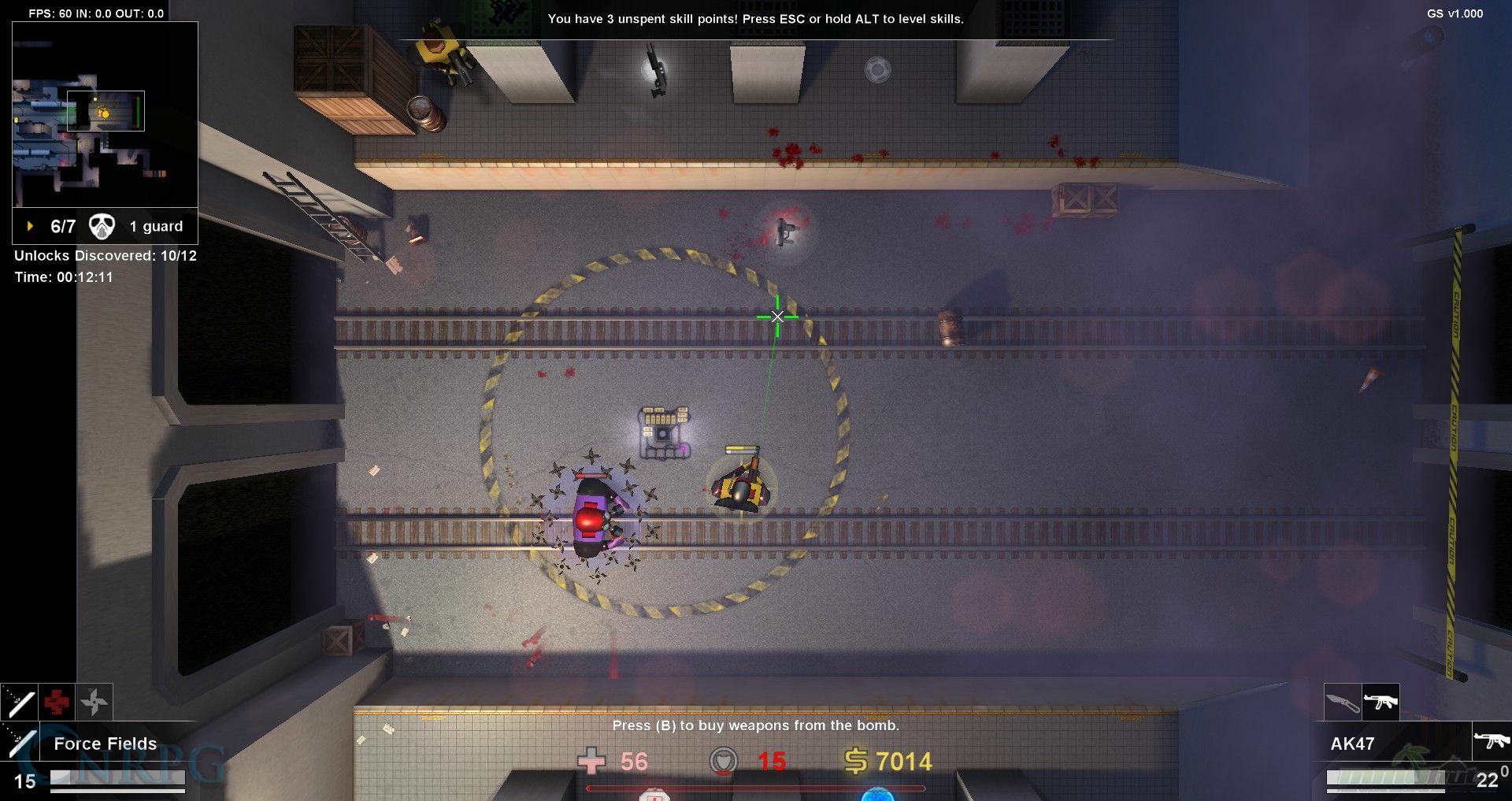 It’s not just an enemy army you have to face off with, though. At the end of a map, after all the checkpoints, you come to one more bomb typically. This is where the Left 4 Dead survival feel comes in for me. You have to murder wave after wave of Zombies, collecting their souls to arm the bomb. When you acquire enough, it will detonate, and the stage will be over! It blasts you high into the sky, and you can actually use this moment to get secret items too! There are lots of secrets in each stage though, hidden skills, guns, powerups, you name it! Speaking of powerups, let’s briefly talk about skills. Because in this game, they’re just a wee bit different. In most games, picking up a skill or learning one is always to your benefit. As you progress through Geneshift, you acquire skill points, and you can view the skill tree by holding Alt and scrolling up to the top of the screen. That’s kind of weird. There has to be a better way. 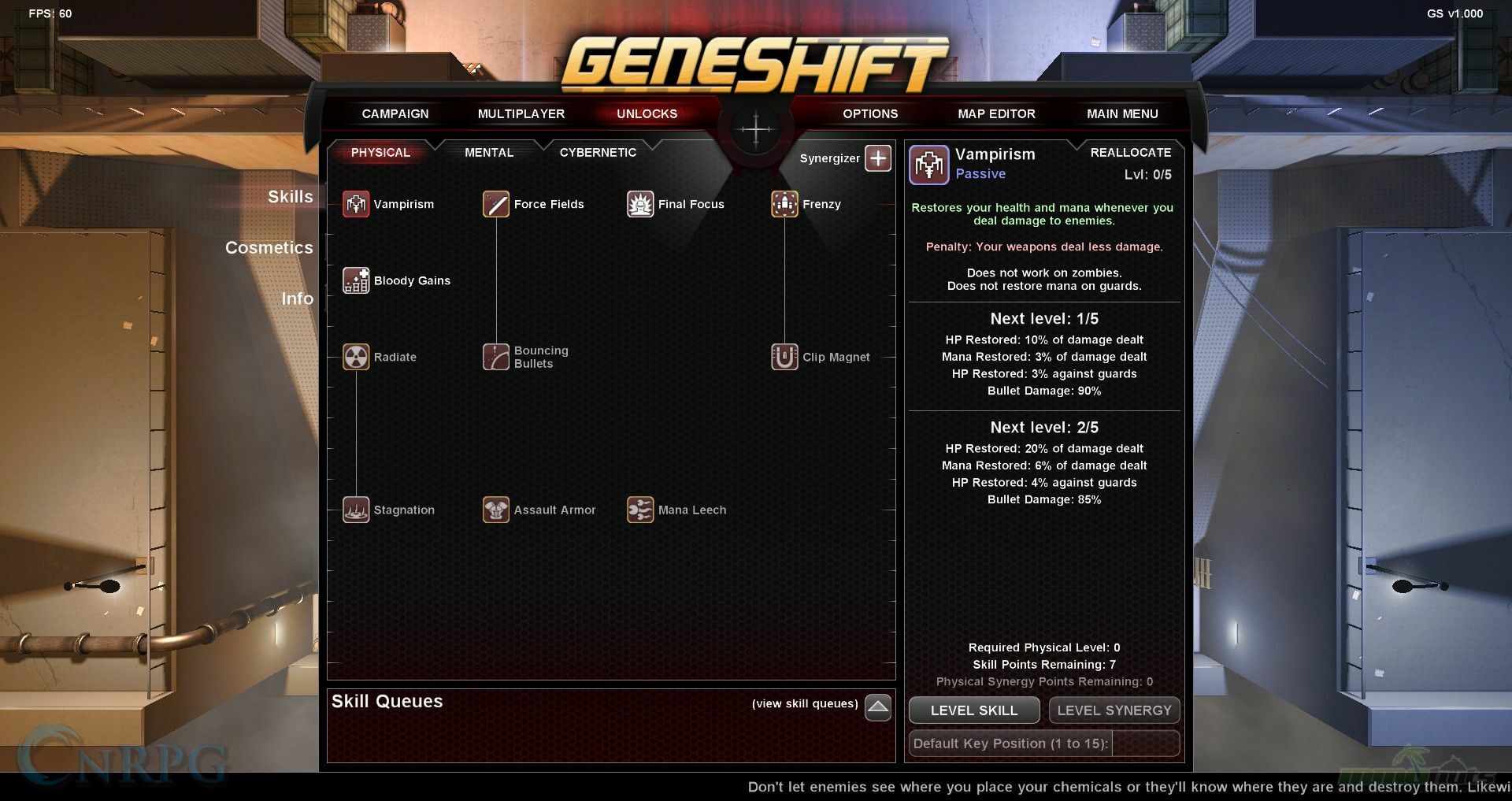 There are three types of regular skills, Physical, Mental, and Cybernetic. Then you have Cosmetics, which do not influence the game, but are very fun. My favorite one is probably “Humiliation,” which creates a booming “Humiliation!!!” across the whole server when you kill someone. Is it necessary? Of course not. Is it amazing and hilarious? Of course it is. But let’s talk about the important stuff. Each skill gives you a useful power. You have a Force Shield, but it comes with a cost. Or you can upgrade it to also bounce enemy bullets. Not all skills have an upgradeable skill, but several do. You can activate a self-repair from the Cybernetics tree, but using it constantly drains mana, and it slows you. Invisibility also drains mana. You can get more health from kills too! But each time you use that, you get bigger and bigger, which means it will be harder to stealth, and make it much easier for enemies to hit you with bullets. And they almost never miss as it is. There’s always a price to pay with each skill, so you really have to consider every single thing you do. But under level 20 you can reskill as much as you want. Use that time wisely to figure out exactly what you want to do. 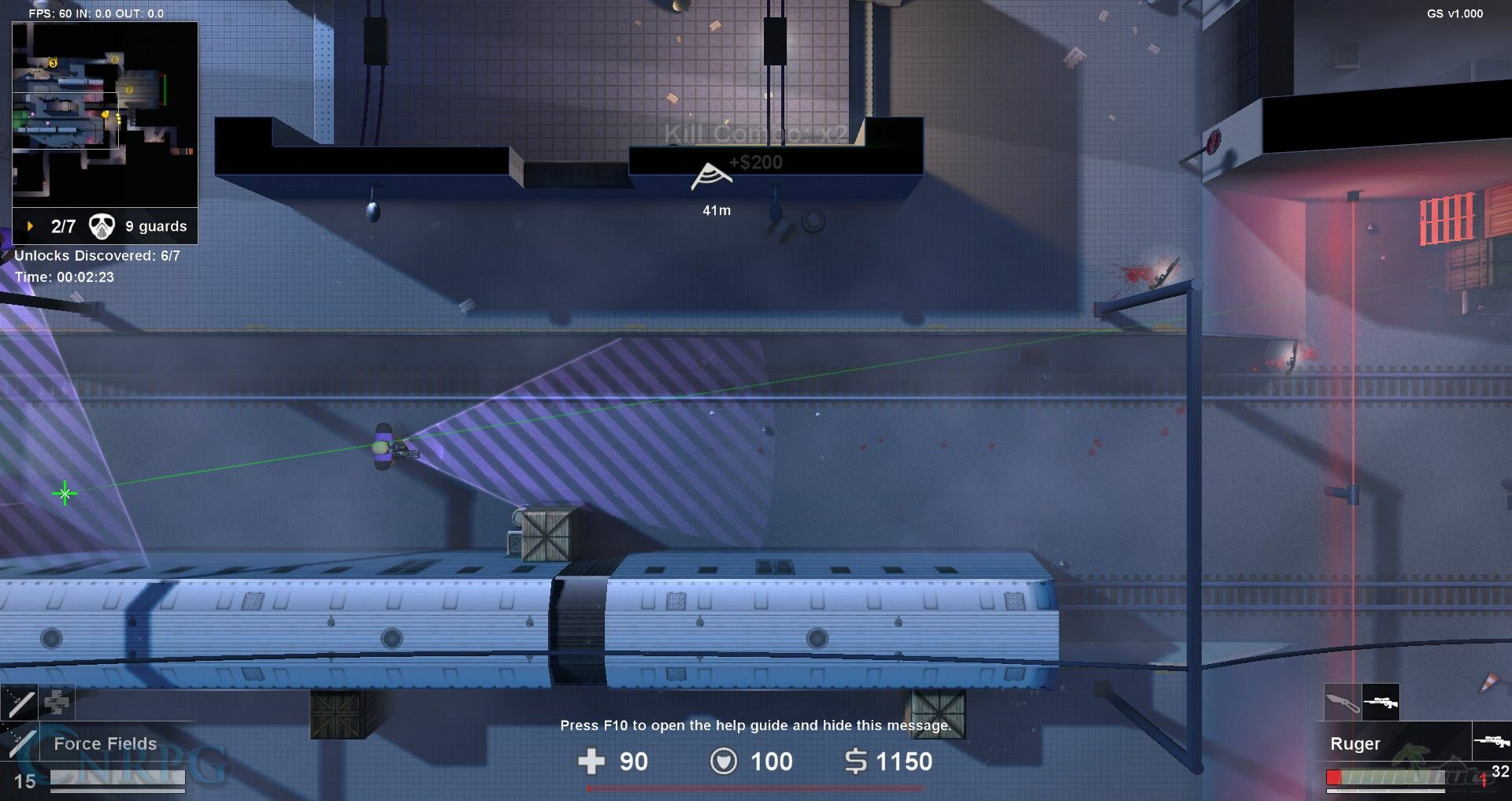 This is a game that’s fun with friends. You can team up as I said to tackle the story mode, but if that’s not your cup of tea, there are also online matches to go for. You can do team deathmatch, free for all, capture the flag, all kinds of wacky game modes. This did not do it for me quite as much. Everytime I’d find a game that had people in it, it’d probably be an FFA or TDM, where the other side were waiting for me at spawn, and they’d just kill me. I’d have to try and survive the waves of bullets to get back to my gun and fight them off, but it’d never be quite enough. So this wasn’t as fun for me, but it’s important to point out, because loads of people will have tons of fun in this mode. Not to mention there’s also a pretty robust map editor. You can set what kind of map it is, place everything exactly how you want it, and save it for others to try out. I’ve never been big on Map Editing, not since Warcraft 2 anyway. I made some pretty choice ones for that.. But I love having the option to do so if that’s what I desire! 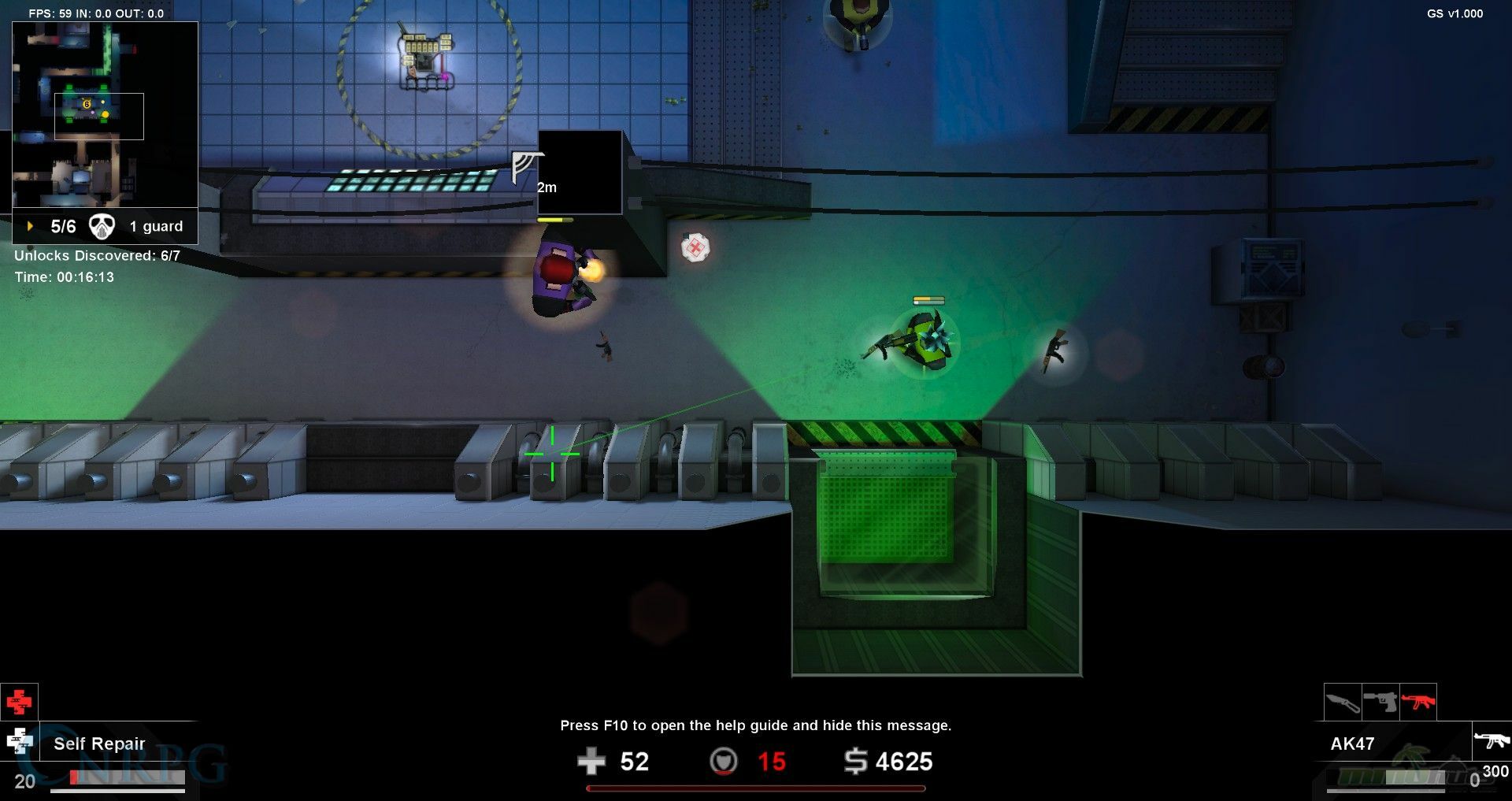 Mutants Make the World Blow Up: 4/5

The actual gameplay and mechanics for Geneshift are wonderful, the gameplay is unique, the violence is tasteful, but that’s where the fun starts to dwindle for me. The downside for me is that it feels… bland! The stages don’t feel so exciting for me. From a technical standpoint they are marvelous, but they lack a sparkle, an aesthetic design that appealed to me. The music didn’t catch me and most of the time it would drone so I forgot it was even there. The AI’s not all that great, except on higher difficulties when it’s pretty ridiculous. These are the only real downsides to the game for me though. I didn’t find many people to play this with online, but when I have some friends that own it, I’d love to do a full four player run of the main campaign, because it sounds like absolute chaos, especially when you have one or two people that want to be tactical and sneaky, and the other one who plows through enemies with a vehicle. The bullet physics are wonderful, controls are good, mechanics are terrific. This is a great game to play with friends or by yourself. I can see many hours being lost to this on our livestream, The Bottom Tier, and I say this without any exaggeration: Geneshift is the best top-down shooter I have ever played. Ever. None of the others from my youth or adulthood even compare.