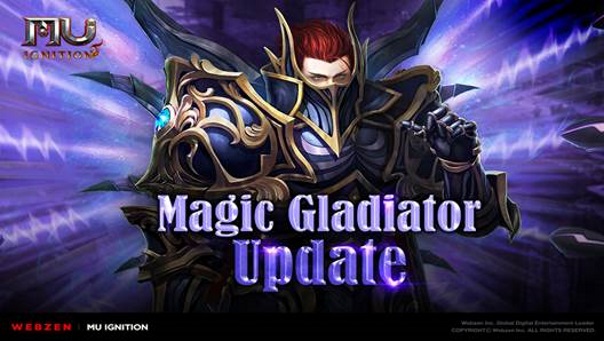 Magic Gladiator is the 4th class for MU Ignition, and is adept in Magic Spells and Swords, able to use both Dark Knight/Dark Mage’s equipment flexibly. Players can also equip the Magic Gladiator with exclusive wings only available for this class, and earns 7 stat points instead of the regular 5 stat points, for every level gained. Magic Gladiator can be created using Bound Gem/Gem Shop. ALong with the class, this update brings Mutated Monsters and the Monster Card Gallery system. The new mutated monsters, which have become much more powerful than ever, will appear in the fields, dropping valuable equipment and rare items for players to collect. Occasionally, these new monsters will drop Monster Cards which players can collect in the card Gallery and claim the special bonus reward.

The Magic Gladiator will also bring in new features to the game. MU Ignition will now offer a new system called “MU Helper” to enhance the player’s convenience. MU Helper will perform advanced gameplay automatically when the player is unable to play the game at the moment. The new system will run through Blood Castle, Devil Square, Main Quests and even to the suggested hunting spots. In addition, it will also use buff items for players automatically. Finally, there are also special daily events only for Magic Gladiator players to receive valuable items once they accomplish a special quest. All players also have a limited chance to purchase rare items during the event.