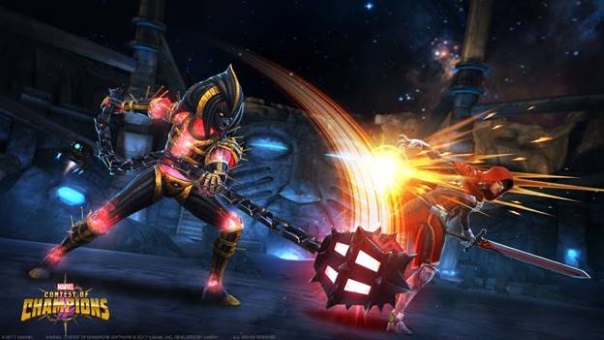 “Queen Haasen conquered and ruthlessly ruled over her kingdom of Languria with only a few mercenaries, and a demonic sword. But her people rebelled against the Queen’s reign of fire and blood, and sealed her within a mystical iron maiden to suffer for all time. When Mephisto offered her a chance for vengeance, the Prince of Lies granted her new life in the tortured form of her walking iron tomb, and the weapon for which she is named: Morningstar.”

Now that she’s been officially revealed at New York Comic-Con, a character created specifically for Marvel: Contest of Champions has arrived: Morningstar! Below are her stats/skills:

Special 1: Strength of Languria – Morningstar strikes with her weapon, as it glows with the power of the souls contained within.

Special 2: Maiden’s Furnace – Morningstar channels her pain, rage, and hatred into a beam of pure power.

Special 3: Soul Chains – Morningstar lets her weapon taste the soul of her enemy.

Signature Ability: Morningstar’s weapon grants her a link to her Opponent’s soul, allowing her to feed on its power, strengthening herself, while weakening them.