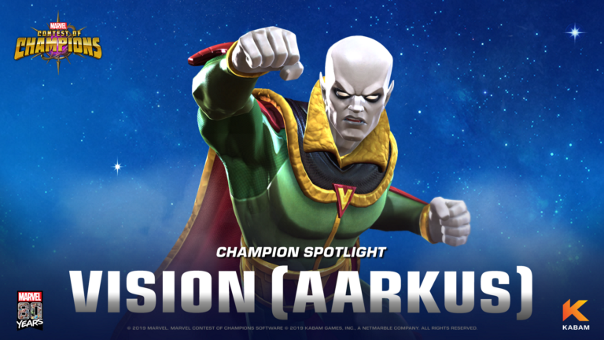 A Golden Age character from Marvel Comics officially enters The Contest: the Alien Crime Fighter, The Vision (Aarkus)! When you think The Vision, typically you think of the creation of Ultron, not Aarkus. But we have a brief bio and his ability list today.

“Vision, whose true name is Aarkus, is an alien law enforcement officer from a dimension known as Smokeworld. After being accidentally contacted by a scientist from Earth, Aarkus came to our dimension to fight crime. He has the ability to control gasses, smoke and cold, even teleporting to the far side of the world using little more than a smoldering cigar.”

Aarkus starts every fight with a Power Gain Buff and gains more over time. As long as he has at least one of these Buffs, he can inflict Armor Break Debuffs onto his Opponent just by staying near them. While under the effect of an Armor Break, Opponents also take Coldsnap damage over time. To end a fight, Aarkus can convert his Armor Breaks into a very long Armor Shattered Debuff, which shuts down Robot systems and lets him deal bursts of bonus Energy damage with his Special 1 Attack and Special 2 Attack.

Developer’s Note: The main reason for this is so Aarkus doesn’t have to worry about getting too far from the Opponent during his Special Attacks.

Special 1 Attack – Spiral of Smoke: Aarkus rises up on a tornado of smoke and vapor, then slams into his Opponent, knocking them back with the force of a gale.

Developer’s Note: Aarkus is most effective when he can get 10 Armor Breaks on the Opponent before converting them into Armor Shattered.The refresh on The Vision’s Special 1 Attack makes it easier for him to get those 10 Armor Breaks.

Special 2 Attack – Blizzard Blast: Aarkus conjures a blast of frozen energy, snow, and ice, chilling his Opponents to the core.

Developer’s Note: This is the Special Attack that Aarkus wants to work towards in the initial stages of the fight. In addition to Armor Shattered being potent against Robots, it has a stronger Armor reduction than his individual Armor Breaks, and is used to trigger bonus effects on his other Special Attacks.

Special 3 Attack – Talk to the Hand: Aarkus vanishes into the ground in a puff of smoke, then uses the energy of Smokeworld to grow his hand to gargantuan size. He toys with the Opponent for a brief time, before picking them up and slamming them into the wall.

Developer’s Note: For 20 seconds Aarkus doesn’t have to worry about keeping the Opponent in-range to apply Armor Break and Coldsnap to them. And if they’re affected by Armor Shattered, he gets a nice long Fury buff which increases the damage of both his regular hits, and his Coldsnap. This attack is great when you just want to let loose on the Opponent.

Developer’s Note: Important to note that it purifies one of each type of non-Damaging Debuff on him, so triggering this can have consequences for more than just the Debuff that triggered it.