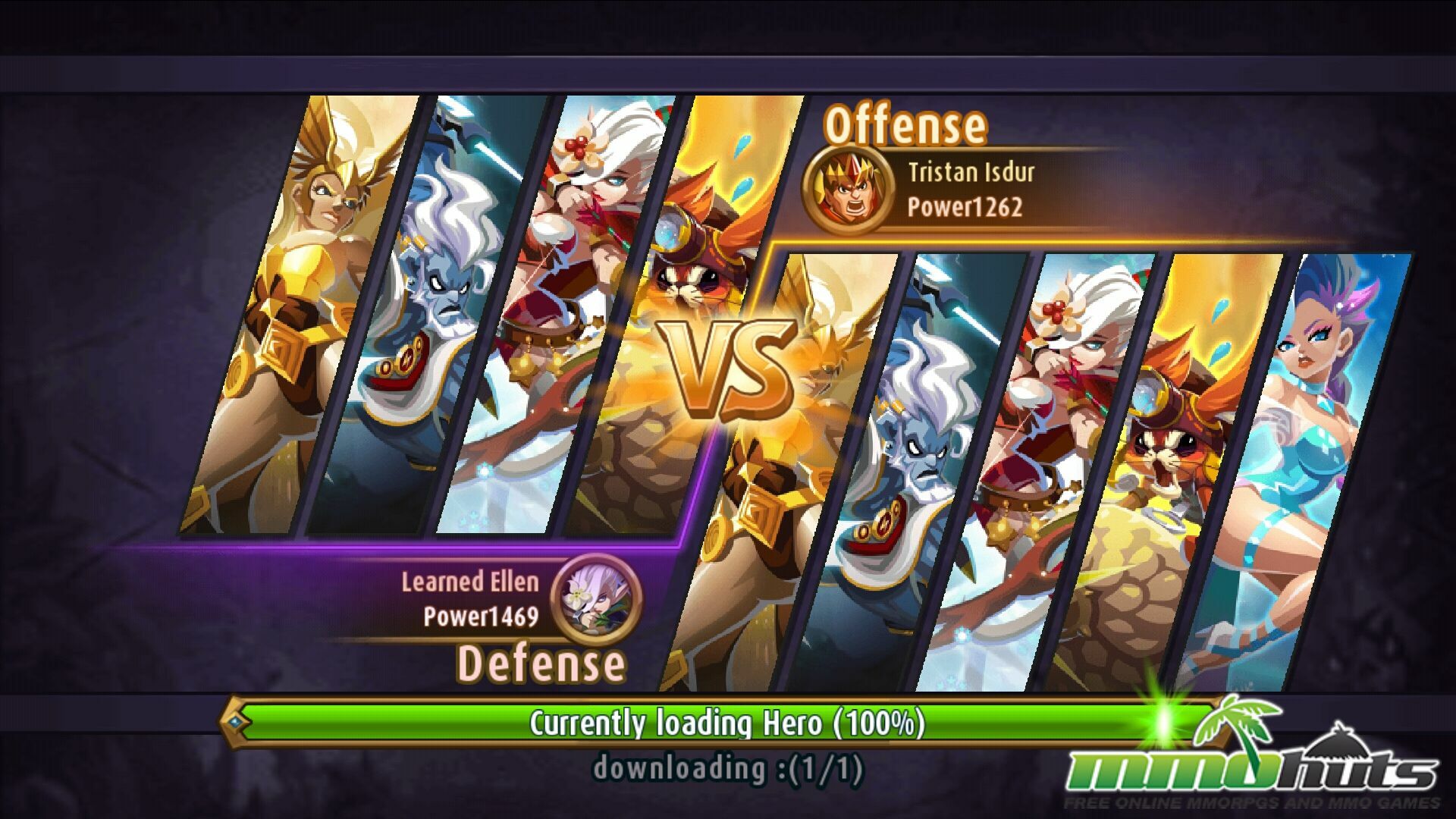 Magic Rush: Heroes is a tower and line defense title from Elex, the company that brought you titles such as Vikings: Age of Warlords, Sword of King: Excalibur and Sky Commander.

The game primarily focuses on evolving heroes as your tower defenders and your units in PvE instanced maps. The campaign mode follows a series of starter “heroes” as you chase the enemy who has taken the hero shards of their comrades.

Magic Rush: Heroes’ gameplay is tightly interconnected into the game’s good attempt of a mythos. However, it just basically means that you have to focus on evolving and leveling your hero pool as you go through each map in the campaign mode, or through whatever dungeon you will be jumping into on the surprisingly diverse other modes available. 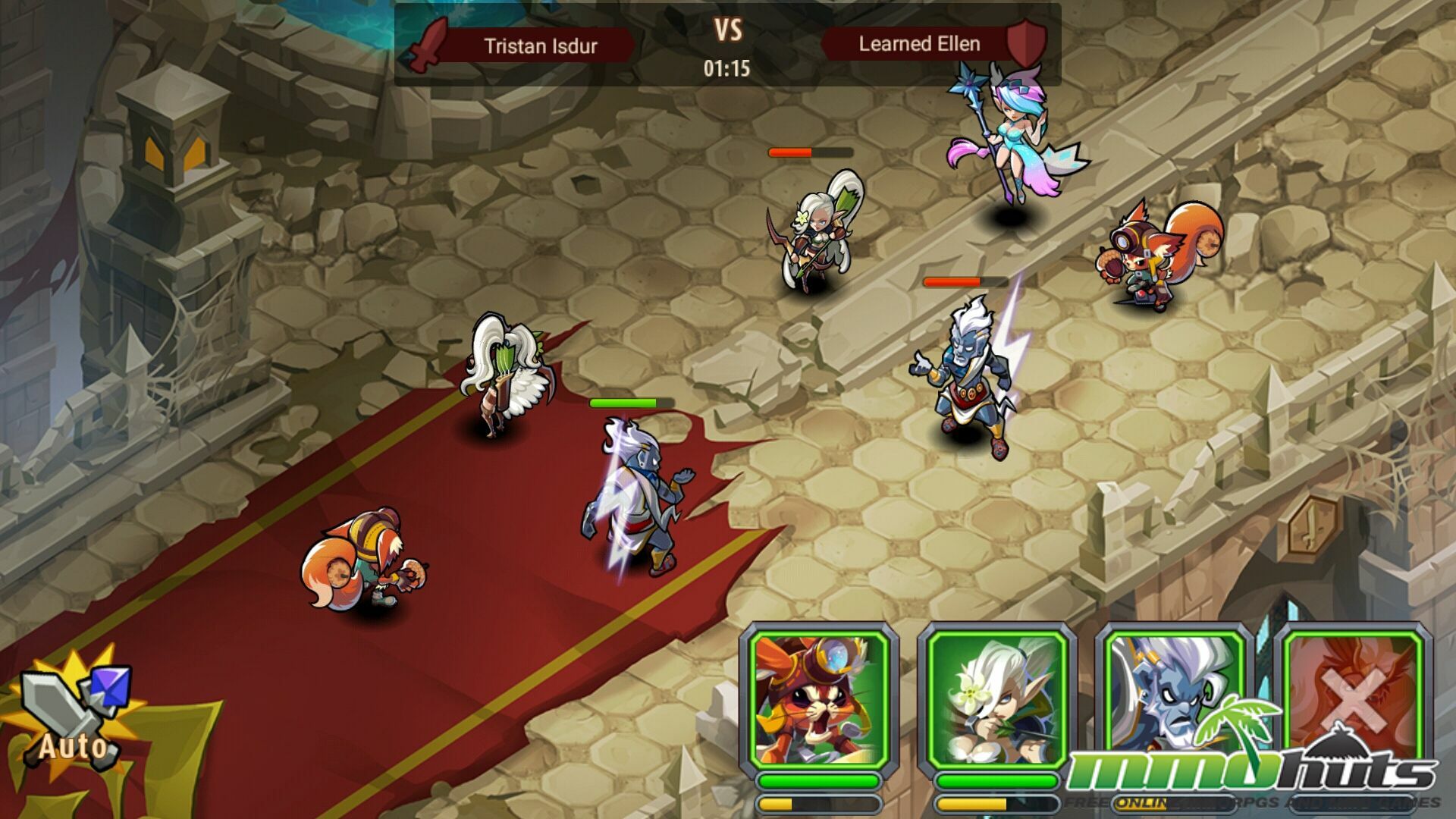 The standard mode plays out like Brave Frontier but with more active skill based attacks.

So moving on to the units you will be able to get. Magic Rush has five unit types that you can choose from as part of your team of five. Each hero is classified by star ranking with one star being the lowest and five as the highest. Your units also have levels that you can increase through the usual means of using them on maps/quests. The other option is using exp containers that you can farm and gather just by playing the game for a set period of time.
You can improve the heroes’ inherent abilities as well by imbuing them with runes. However, this is where things get a little different for Magic Rush since each hero, at certain levels, will have specific runes per level and per slot. The game’s rune system also opens up equipment slots per hero as a bonus. This allows further unit strengthening options as well.

Another thing of note in Magic Rush’s hero system is that unlike other titles that use the same unit collection system to increase unit rarity, you can immediately “use” the collected runes on your hero to not only increase their rarity (which the game also provides a visual cue to show your collection progress) but in doing so also increase their base stats PER shard collected. This is a really good change of pace in terms of this kind of system because it makes you feel that each shard collected has meaning. 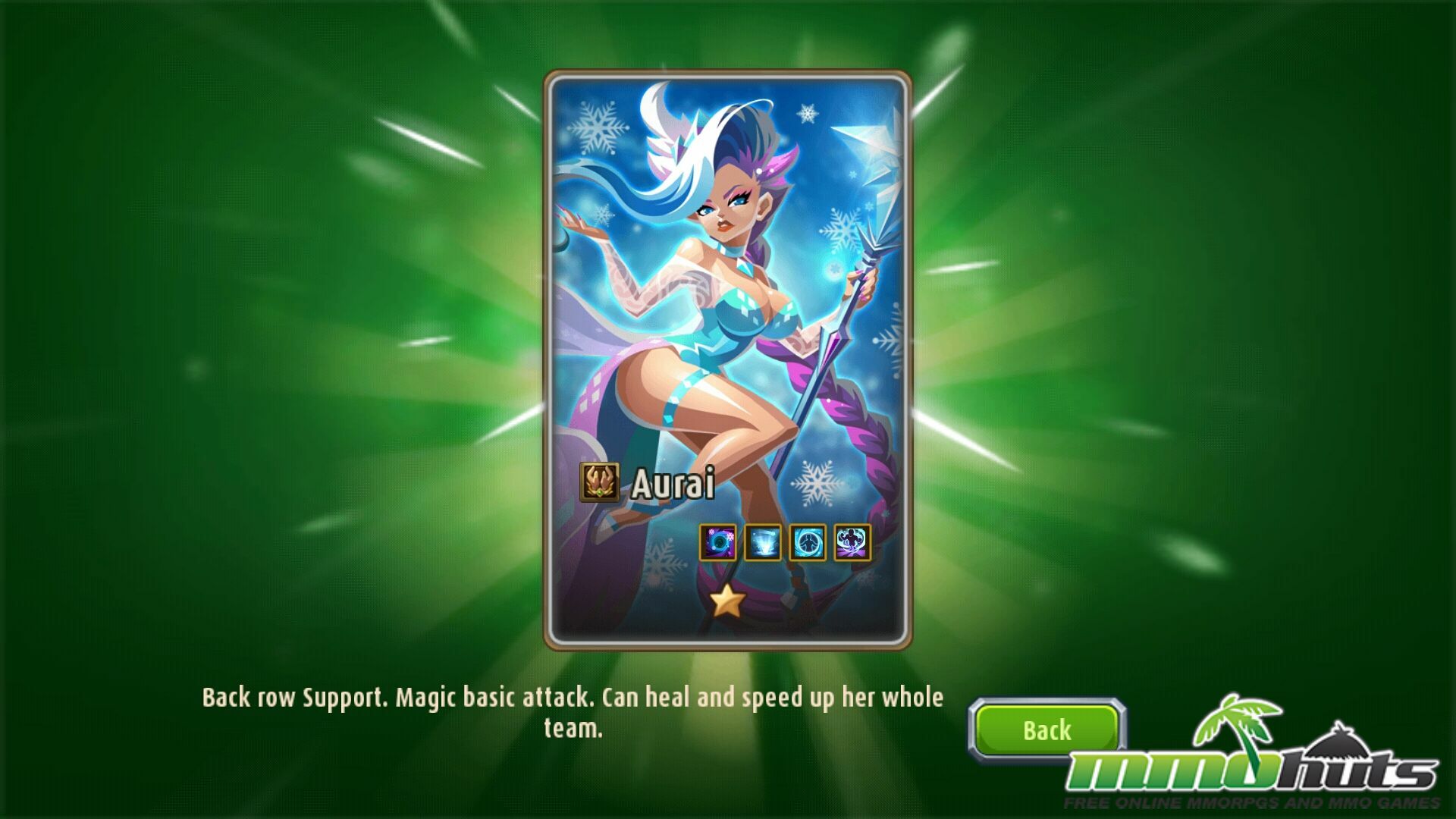 League of Legends players should recognize some familiar faces.

Oh and addressing the elephant in the room. The units and maps in this game are essentially ripped straight from League of Legends. There’s enough variety in visuals to make the heroes not 1:1 clones of the famous champions, but when combined with iconic ability kits, it won’t take much imagination to see who is who with clarity. Occasionally they throw in someone from Heroes of the Storm just for good measure. It feels like the game was designed for people who dig the League of Legends’ mythos but can’t stand playing MOBAs.

Magic Rush’s PvP system uses the active time battle gameplay with your team facing against an opposing team in asynchronous battles. Unlike the PvE version of the mode, PvP is fought automatically, leaving a bit of RNG in the mix so that the superior team won’t win 100% of the time.

The good thing about how the late game Magic Rush PvP works is that it allows players who have a wee bit more time on their hands to plow through the early stages of PvPing. And then the difficulty curve really rises as you reach the mid – high level tiered players that you would really need to invest on actual units to even make a dent in the opposing team. 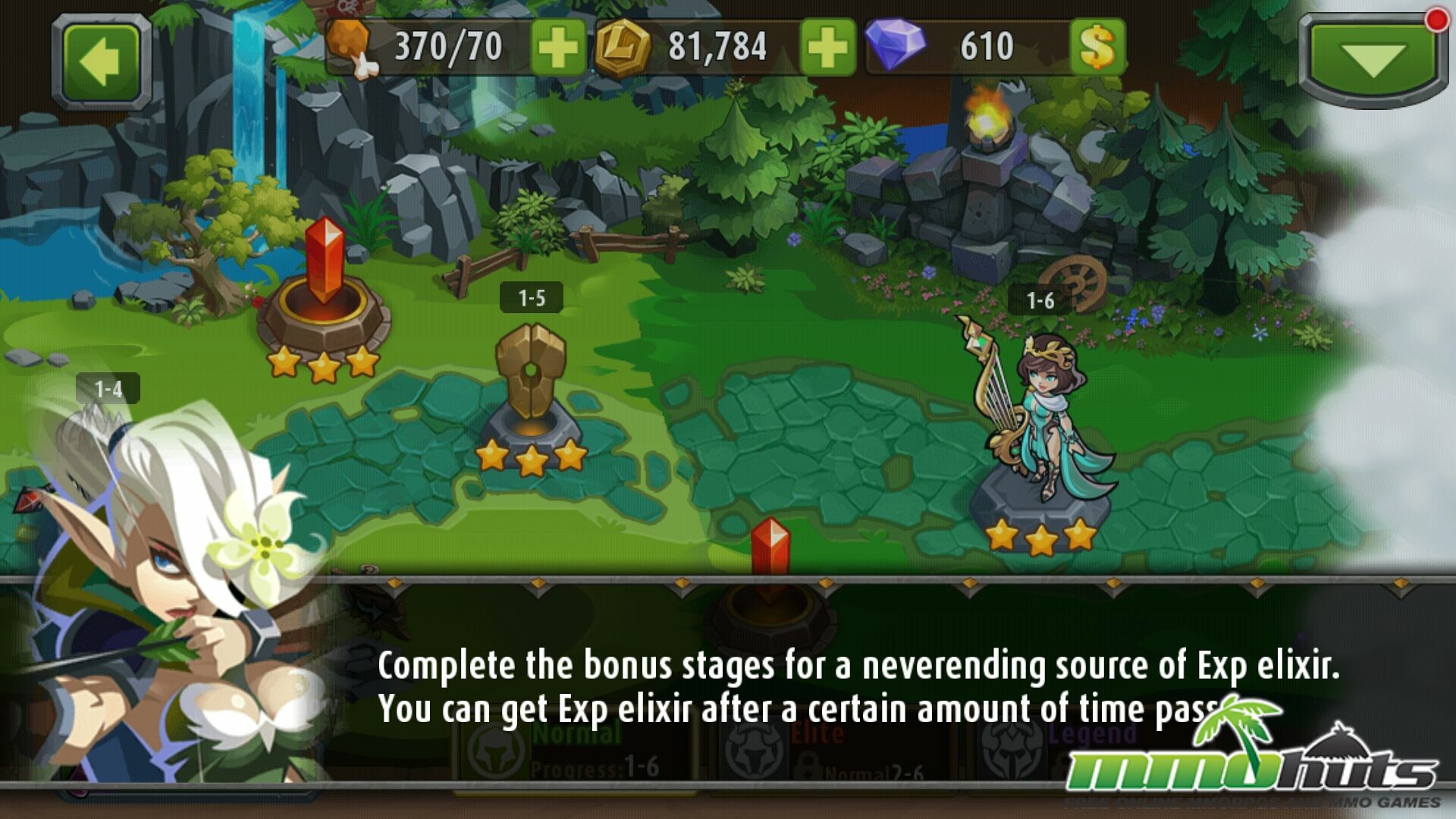 Enemies are diverse enough to make the campaign fresh for quite a while.

Aside from battling in PvE campaigns and PvP. Magic Rush provides the staple added features that you’d expect from a top tier F2P mobile game such as: clans system, dungeon raids, ladder matches, research and development, and etc.

To unlock these game features, the game uses the usual level requirement system that is often seen on such titles. The leveling system can feel a bit arbitrary and tedious, which is annoying for those that know the good game features are locked from them until they’ve sunk their share of time into the game. This isn’t really earth shattering to the overall enjoyment of the game, and can even be spun as a positive if you think about the more fun game features as being achievement rewards. 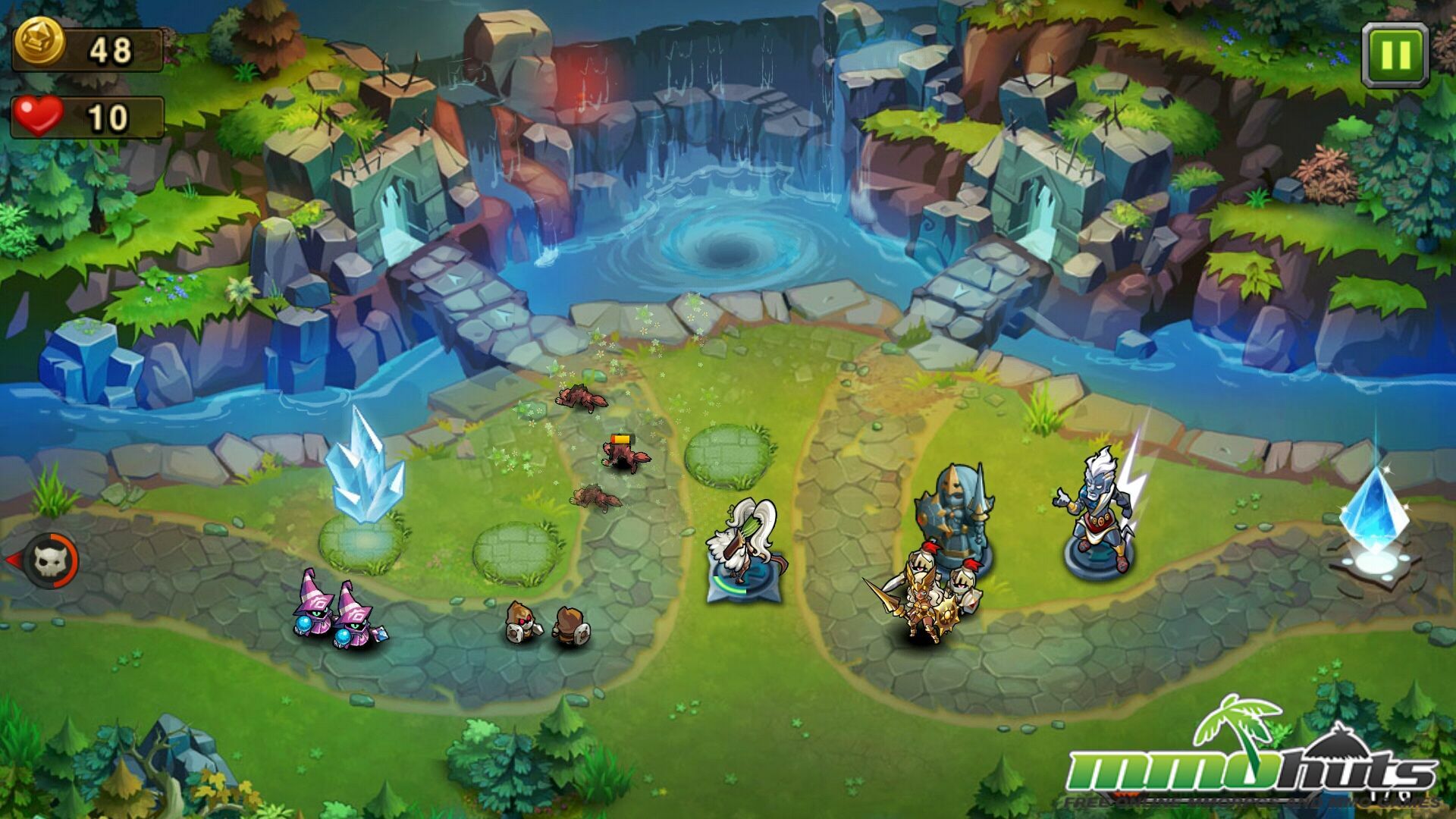 The tower defense mode is the real star of this game.

So moving on to the two game modes that you’d mostly be playing. The Campaign Mode follows the usual active time battle system where you face-off against monster mobs. You control only active skill activation and targeting if you hold your finger for certain abilities.

The other game mode is the tower defense battles which is tower defense twisted in the style of the famous mobile game Kingdom Rush. Unlike Kingdom Rush however, instead of leveling and researching new towers independent to this mode, your towers will actually be based on your heroes stats, as the heroes themselves take to the field when you pay the money for their ‘tower’ cost. Gold earned in match from defeating enemies will allow you to summon more heroes or level your already summoned heroes to unlock the rest of their ability kit. Just like Kingdom Rush, you can expect surprise new lanes, air dropped enemies, and other shenanigans to keep you on your toes as you advance further into the game. 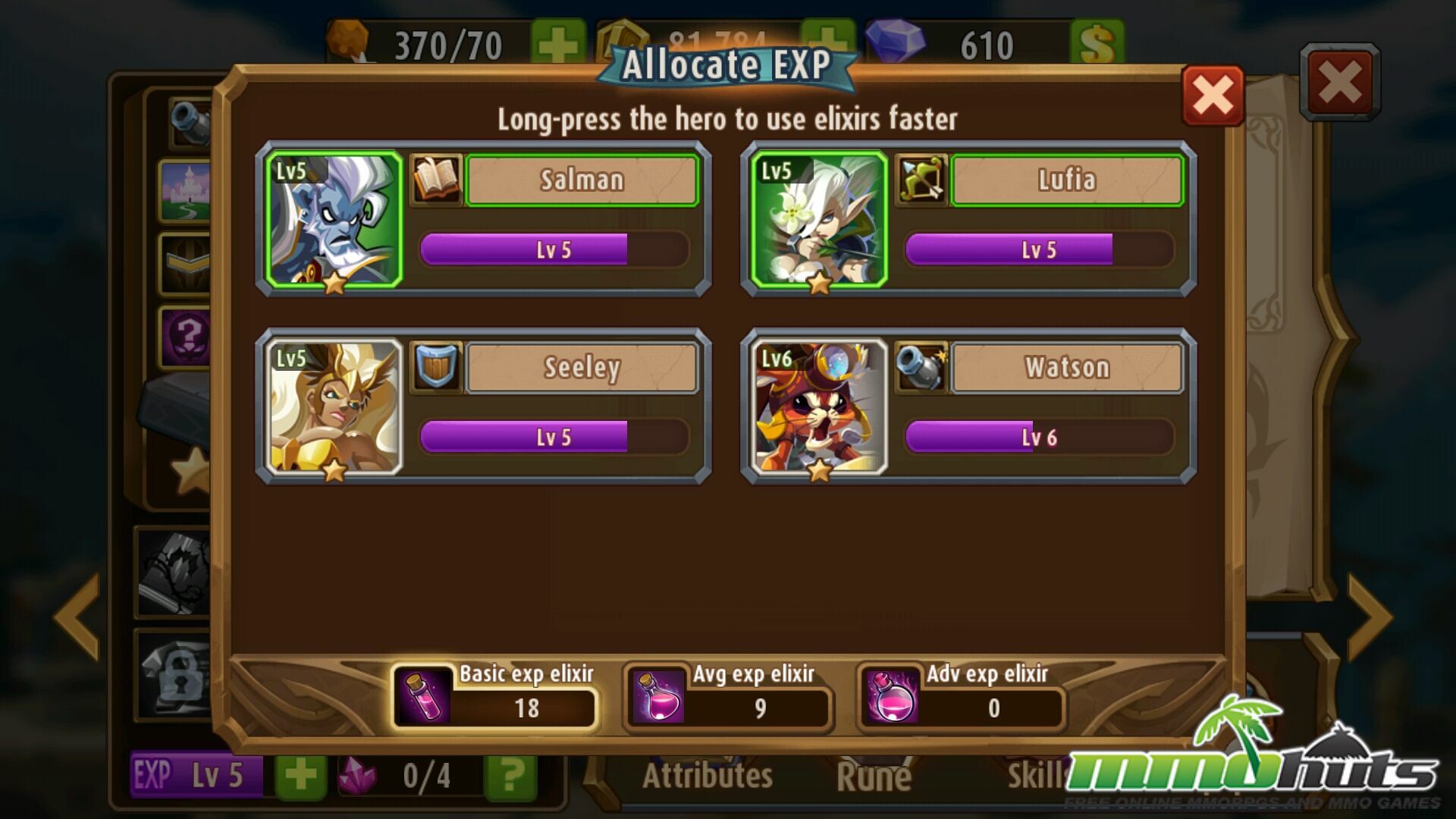 Leveling characters with EXP, fragments, runes, and skills via gold make for a rewarding experience.

The TD mode only happens during special dungeons in campaigns while you’ll practically be playing Magic Rush with the ATB mode system. It’s kind of a bummer as their take on Kingdom Rush is a bit more fun than the standard upgraded Brave Frontier style gameplay you spend most of your time in.

Magic Rush: Heroes is a real engaging title that is surprisingly fun to play. I love how the game swaps between two highly popular mobile game styles to keep gameplay fresh. It’s a surprising breath of fresh air to the numerous simulation-strategy titles that have swarmed the market these days. However, with that said, the game still falls into the pitfall of the F2P mobile model due to the ever increasing cost to stamina to attempt later levels, and automated power curve driven PvP.

Another thing of note is that if you’re trying to maximize the game for free, you’ll be stuck with your first set of units for a long while. However I never felt the starter heroes were too weak to hold their own in PvE challenges as their team synergy is quite impressive for a free starter roster.
Overall, I can say that Magic Rush:Heroes is one of those titles that I can highly recommend. If you’re the type of person who’s looking for a good variety to cleanse your mobile game palate from all the sim-strat or eCCG titles, then Magic Rush: Heroes is indeed a good choice to sink your teeth in.