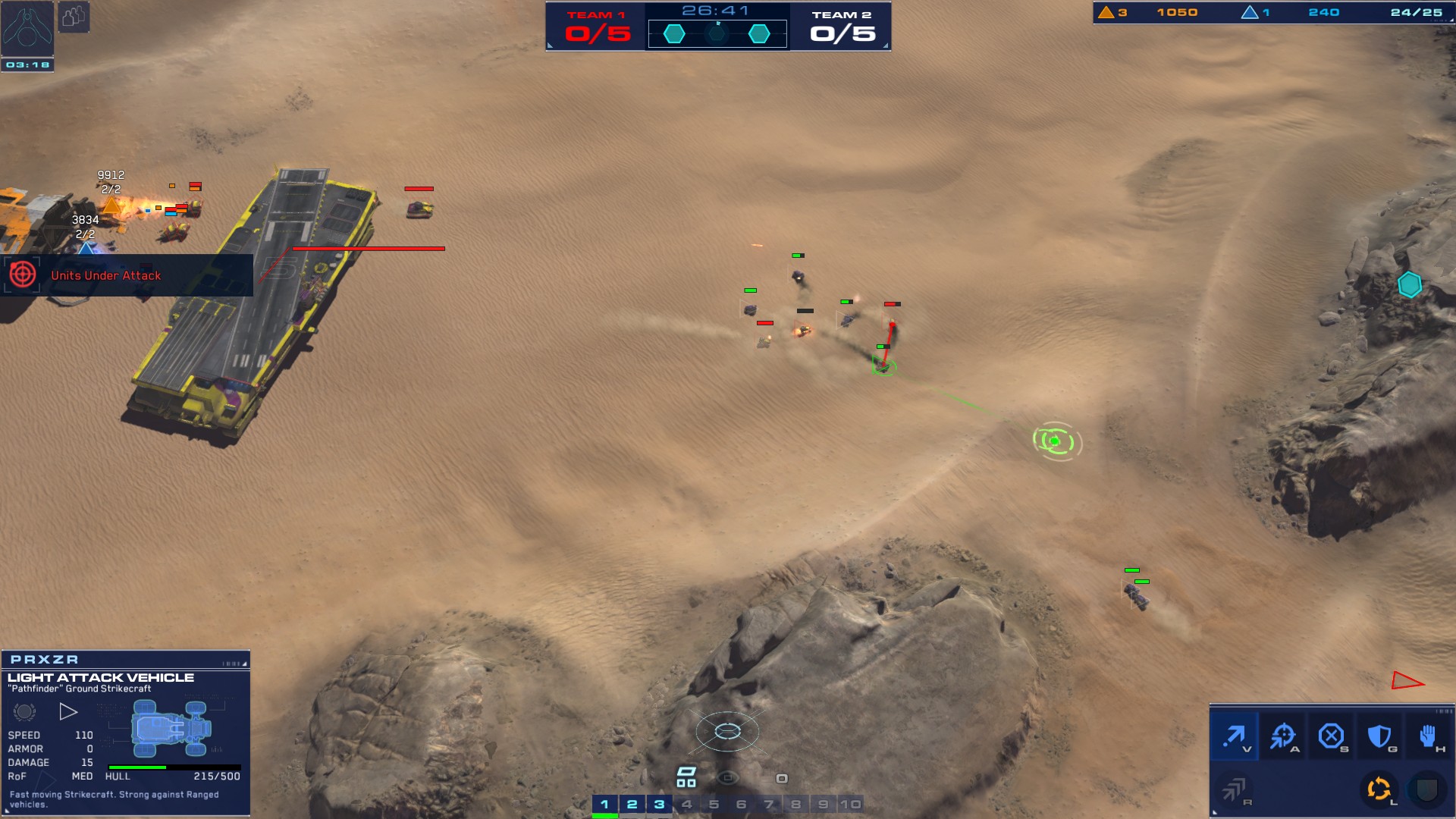 If you are a member of the old guard of strategy games, you have probably heard of Homeworld. The original hit in 1999, immersing players in the true expanses of space combat. Now so many years later, the prequel has arrived to bring the fight back to earth, or Kharak as the case may be. In Homeworld: Deserts of Kharak you will be building up from the ground, prior to the events that happened in the original Homeworld. Resources are scarce and the future bleak, so only the baddest army of the sand will live to see tomorrow.

As our good pal Han Solo once said, “No one wants to stay on Jakku,” and the same goes for Kharak. Apparently people in the future don’t like desert planets, and well, I can’t blame them. The same goes for the Coalition that you will be fighting for. The Coalition as we know it are an alliance of clans from the northern polar region of Kharak. I won’t go too much into detail as part of the fun is discovering the story for yourself. But to put things short, they want to leave the dying planet of Kharak, but the Gaalsien are in the way. The Gaalsien are the opposing faction in this story, a renegade desert clan right out of Mad Max. Since this clan is dedicated to Sajuuk, they live by Sajuuk’s Law and apparently the Coalition violated their arbitrary laws of convenience. Thus a faction wide death battle ensues. 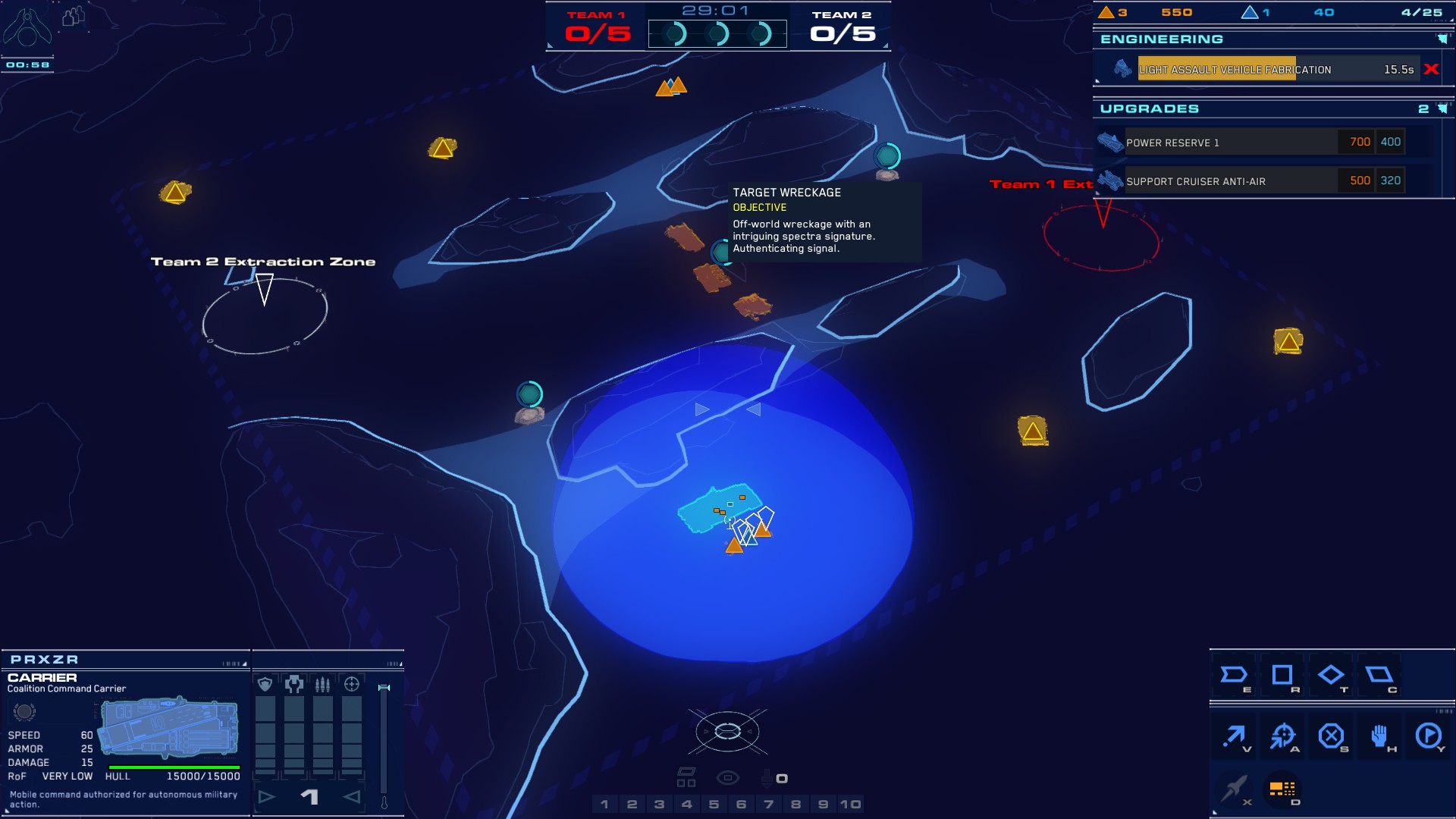 There's plenty of tricks to the trade if you can learn how to use them all.

During the main storyline you will lead the second expedition with the chief science officer Rachel S’jet. In the story mode you will slowly process further into the game, getting to know each element and unit of Homeworld: Deserts of Kharak in an organic way. And even though the story is enjoyable, strategy games are notorious for its skirmishes, and after a few hours of fighting my way through hordes of Gaalsien, I felt comfortable with facing actual players instead of the AI. But first, let’s breakdown gameplay comparable to other popular RTS titles.

In Homeworld: Deserts of Kharak, the base of your faction is a movable carrier. This carrier is slow, but is the driving force behind your troops. Here you will build, upgrade and learn everything that is required to go out into the world and defeat your enemy. But when it comes to playing online against other players, you will have to make everything from the ground up starting with the salvagers. As you know strategy games, you need resources, and these resources can be gathered by salvagers. But since the salvagers have no other function besides gathering, you will eventually have to make units to defend them. Which means choosing research paths while micromanaging your resource acquisition. Most of the units can be researched by spending these resources on upgrades, including even the most basic unit which is a Light Armed Vehicle. The principle is very simple, but the branching options here are far more complex than most RTS you’ll come across. This is just the first step in what makes Deserts of Kharak a real challenge to master. 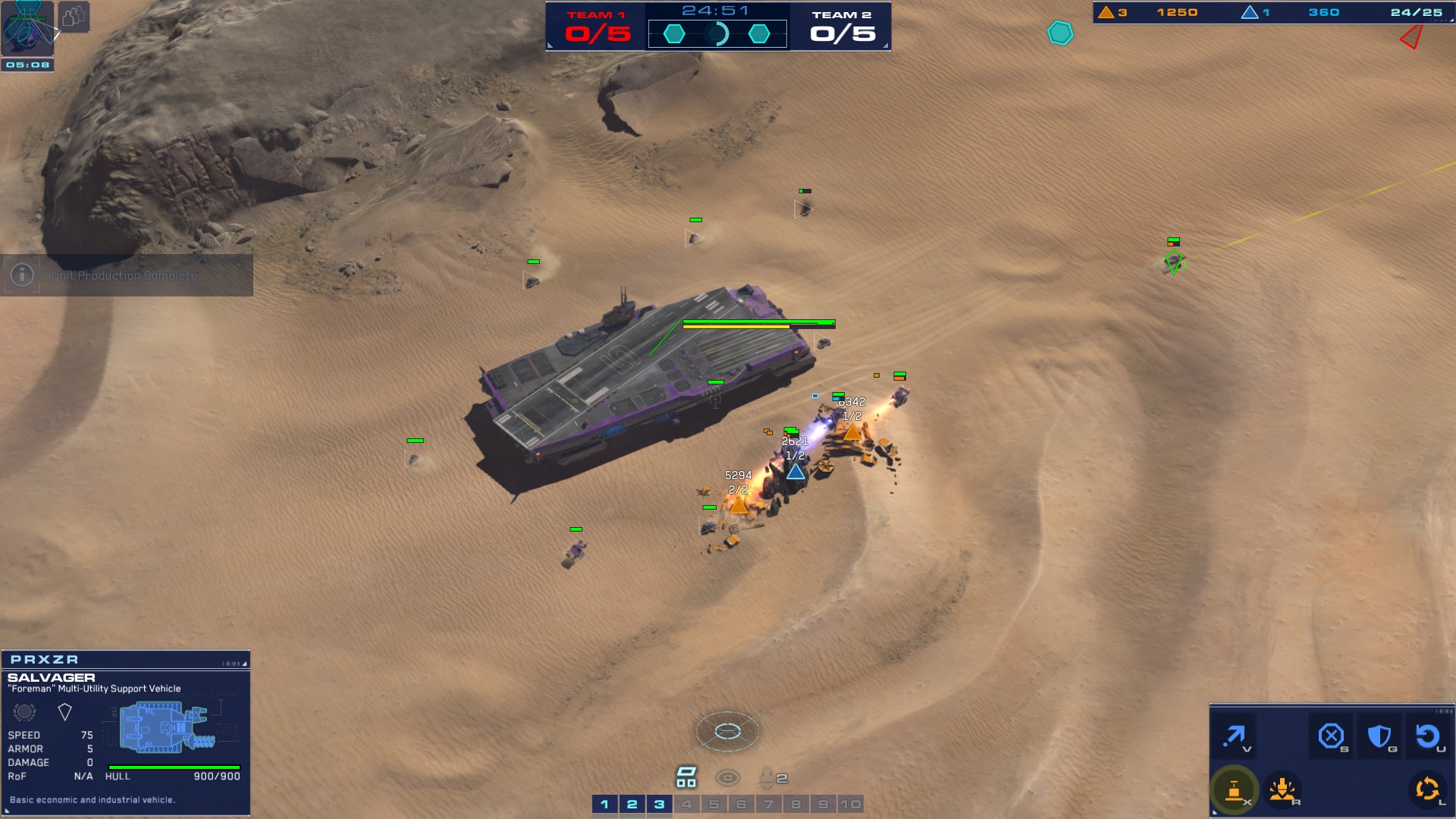 The central base being movable adds new levels of strategy to gameplay and scouting.

Producing units, upgrading your armaments, and advancing into better technology isn’t everything. Otherwise this could just be turn-based. There are key objectives outside of flat destroying your enemy that you need to keep tabs on, but it gets tricky. Scattered over the map you will find five artifacts. Once you find and gather them, you will win the game. It’s as simple as that, but in reality a lot more difficult than you might think, especially since the other player has the exact same objective and is also trying to improve his force at the same time. This makes scouting far more important than most RTS titles, and knowing how to counter your opponent at every step of the game is vital as you never know when a rush for an artifact may begin.

In my first few online matches I went in with general RTS tactics and got absolutely smashed. My old bag of tricks just wasn’t cutting it, surprising since this game just launched! For starters I tried a zerg rush only to realize that an opponent that’s ready for it can easily fend it off. My aim of destroying their economy backfired in my face as I left myself defenseless for their swift counterattack that put me impossibly behind. I realized I was going to have to think beyond simple Cheese strats to consistently win going forward. 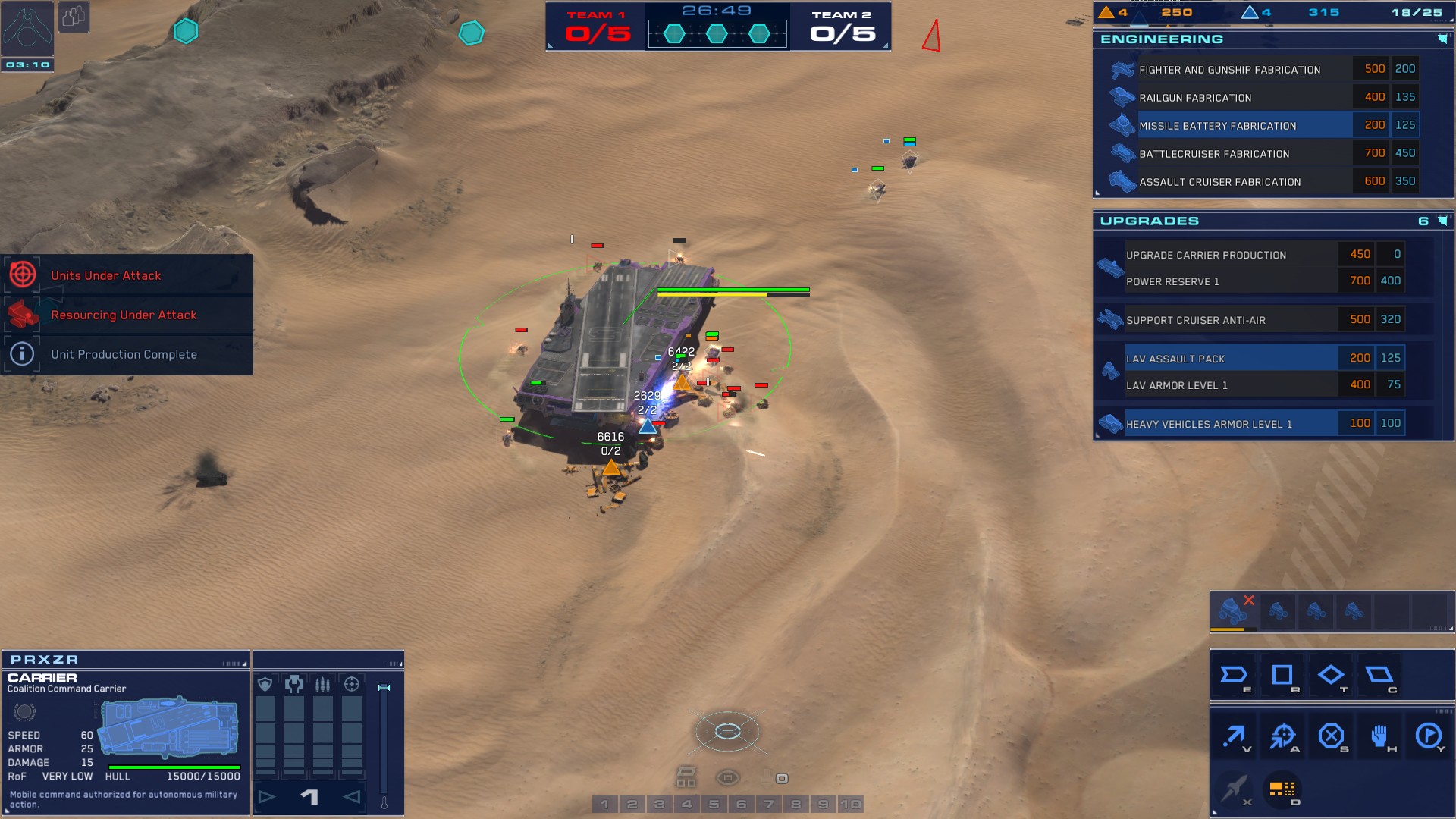 Menus are very minimalistic when you don't need them, but detailed when you do.

With my dignity as a veteran high level RTS gamer in tatters, I queued again only to end up against the same masterful player once more. He crushed me so vigorously I didn’t have a chance to build further on my strategy. Overestimating the ineffectiveness of zerg rushes, I went for a full production rush, going heavy on salvagers instead of protection. To my chagrin, my new foe used my initial strategy and caught me with my pants down. Clearly what I knew as high level players in other titles were nowhere near the hardcore base Homeworld had enticed to buy in early.

And this is what makes a strategy game fun. Strategy games should take time to learn, with a long series of tough breaks on the path to greatness. If your existing strategies easily transfer into a new game, they will get dull quickly. Sure you might learn how the better players are stomping you out in a few days, but learning how and why they do the things they do each time will take far longer.

Homeworld Deserts of Kharak is a clearly positive evolution from its origins in the 90s. The ground setting plays better than space, and combined with the artifact system makes for refreshing gameplay in such an ancient genre. And while the interface looks a little plain, and often you won’t get to enjoy the intricate unit details as its simply not advantageous to leave your camera anywhere but zoomed out, the game still goes very in-depth to reward unit micromanagement, and production. If you are a fan of Homeworld, this new prequel is a must buy. If you’ve never heard of it before, or in general aren’t a hardcore RTS fan, I’d advise caution. Homeworld Deserts of Kharak comes at a full retail price and will only be rewarding for those with a refined RTS taste. Its unforgiving gameplay will punish you if you’re not on your game. But if you’re up for the challenge and not new to the genre, don’t miss out. This game is quality plain and simple, like a fine wine designed with the greatest RTS connoisseur in mind.