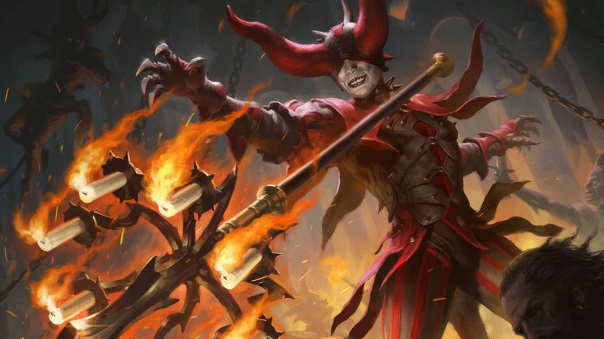 Editor’s Note: There is a video coming for this. I just have to sit down and take the footage for it. But it is on the way!

Shoutouts to my friend Cary who talked some damn sense into me.

One of my big weaknesses in Magic: The Gathering is creating elaborate control decks. I want to have an answer for any situation that comes up, and the downside to that is that those style of decks can be slow and frustrating (for me and my opponent). I play more MTG Arena Standard (Best-of-One) rather than Traditional MTG (Best-of-Three), so there’s no sense in dragging things out if I don’t have to. There is a preamble to this deck though. I was one win from Platinum 4 in this present season and suddenly went on a losing streak, where I fell down to the bottom of Gold 3. I was stressed and frustrated, ready to uninstall MTG Arena. I wasn’t thinking rationally at all. Normally when I lose two or three I stop and take a breather, but I just kept losing four or five at a time before quitting. I needed a solution, and I found it in one of the decks I was having a serious problem overcoming: RDW. I’ll include the decklist below for easy copying into your MTG Arena client.

I wanted to build something that could function on two mana and could win by turn four using about three mana at the most. In your average control deck, you aren’t really moving until turn four or five, when you can start countering, board wiping, or causing general chaos. The current expansion, Ravnica Allegiance offered me exactly what I was looking for – the Spectacle keyword. Spectacle states that if you have dealt damage to an opponent this turn, you can play cards with Spectacle for a different cost. In this case, it’s one red mana. The most expensive card in this deck is Risk Factor, which is also the only rare in the deck. There are other three drops – Wizard’s Lightning, Light Up the Stage, Skewer the Critics, but those all have conditional modifiers to reduce the casting cost to 1, and they’re very easy to put into place. The ultimate goal of this deck is to start dumping damage on turn 1, and not stop until they surrender or you kill them.

This is the most aggressive deck I’ve put together yet. I considered taking out Risk Factor because it’s a rare, and one of the purposes of the deck is that I don’t need a wealth of dual lands and Planeswalkers to win – but Risk Factor is far too fun. If it weren’t a four drop, I’d put Rubble Reading in the deck, so I could destroy lands and make people even more upset. As it stands now, I seldom get more than four or five lands on the board anyway, so I’m not so sure it’s a factor for this deck. If it’s more than a three drop, it does not belong in this deck. I call it Siskel and Ebert for two reasons – I give everyone Two Thumbs Down, and it’s built heavily around Skewer the Critics and Light Up The Stage. There’s no fluff in this deck, no “cards I pick just to counter players”. It’s all damage all the time. Is your opponent running a midrange deck like Merfolk or Vampires? Don’t be afraid to burn your Shocks and Lightning Strikes on those key cards. It slows down your potential win, but it also reduces the damage ramp they have.

I’m known to keep hands that only have one Mountain in them, but that’s not advised. The only way I’ll really be excited about that, is if every card in my hand is a one drop, or a Spectacle card (which in this deck, is also a one drop). Light Up The Stage lets me exile two cards until the end of my next turn, and I can play them as normal. This is especially great if I get a Mountain and am land starved.  All of the cards in this deck are really key, and there are lots of combos for chaining together damage. You want to be dealing damage every single turn, even if it’s just tapping Spear Spewer to deal damage to the both of you. I tend to save his damage until I’ve pulled ahead by dragging them closer to 0, so it’s a lot safer. I’m willing to throw burn spells down even if Electrostatic Field isn’t on the board, but the more of them that are, the faster they die. Electrostatic Field is a defender (0/4) that deals 1 damage to a player whenever I cast an instant or sorcery. Even if it gets countered, simply putting it on the stack is enough. That’s why it’s great to get two or three on the board, so even a Shock is potentially deadly.

Once Viashino Pyromancer has been cast, his tour of duty is up. Don’t be afraid to swing with him, or use him as a Chump Blocker to kill something, or to prevent damage from going through. Your other damage dealer is the Ghitu Lavamancer, which, once you have two instants/sorceries in your Graveyard, has +1/+0 and Haste. So he’s worth waiting for unless you’re positive the game is going to be yours. One of my favorite turn 3s is: drop a land, Viashino Pyromancer (deals 2 damage to the opponent), play Skewer the Critics for 3 damage, and then another Skewer or Wizard’s Lightning. That’s 8 damage in one turn, not factoring in already having a Ghitu on the field or Electrostatic. This is probably the fastest deck I’ve seen in the game so far, so it’s not a deck I fear being out-aggroed while playing unless I get a bad start and they get a great start.  It’s hard to have a bad draw when almost everything in your deck is a cheap source of damage.

However, there are decks that can beat it out. I’ve only lost twice since pushing from Gold 3 to Plat 4 again. This is probably the most reliable deck I’ve run, but it did admittedly run into trouble against Mono-Blue Tempo. A slow start against Mono-Blue Tempo was not fun. The numbers don’t lie, and they spelled disaster for me at Sacrifice. Decks with lots of flying creatures (Mono-White Lifegain), Decks that reliably play lots of creatures quickly (Adapt/Ooze), and some tribal options (Dinosaurs) have caused me no end of stress. It’s not an unbeatable world-ender, but if you’re tired of losing, and really want to get in there and blow people up on turn four? Siskel and Ebert is the way to go. I’ll have a companion video for this soon that shows the turn-to-turn strategies, but this is just the beginning where I highlight the decklist, good cards, et al. I have also considered adding The Flame of Keld, but that takes three turns for its final ability to pop, and by then I want to already have the game wrapped up. It’s weird to say “A two-drop enchant is too slow for this deck”, but here we are.

All of Them (seriously)