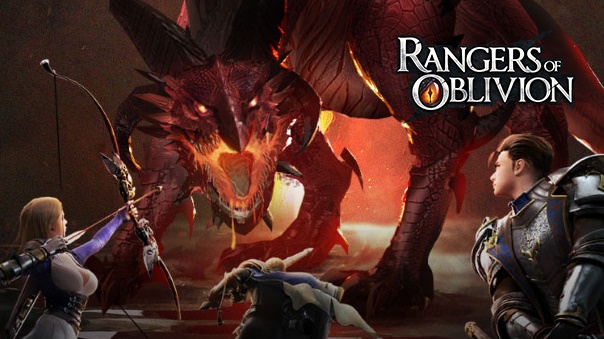 First impressions can be very difficult to overcome. Especially bad ones. The first five to ten minutes engaged with a book, a movie, or a video game can set your overall perception of that title in the mental equivalent of cement. If it’s a good impression initially, that cement block can be chipped away at over time with enough negative blows. If it’s something that leaves a distinctly unpleasant emotion, though, it’s going to take monumental efforts to bring you back around.

For me, Rangers of Oblivion had a pretty colossal blunder. Or perhaps you could call it a set of blunders. The opening animation was cool enough, but after some other recent mobile game reviews I’ve done, such as Grand Chase and Ragnarok M, it wasn’t anything to set it apart from the pack or take it to the next level. Truth be told, it actually just made me worry the game was going to be heavy on the fanservice (which, while I wouldn’t call it “heavy” on the fanservice, it’s around).

Boy, she must be working hard.

What really left a distinctly poor impression, though, was the character creation segment. Sure, you can play as a male or female character. There are six presets for each, one of which, no joke, looks just like Geralt of Rivera from The Witcher series. It’s such a blatant ripoff that NetEase should be ashamed of themselves, if they hadn’t shown us they have no shame, based on previous examples of blatant IP theft. You can then customize them more carefully from there, adjusting features such as nose, mouth, cheekbones, etc, to a degree that was fairly impressive, given that this is a phone game. In fact I’ve seen some desktop MMOs with less customizable features.

This only perhaps increases my bafflement however at the fact that there is one glaring absence of one particular feature that you can’t customize. Namely: skin tone. There is only one color of skin that you’re allowed to play, and it’s pretty much as white as Wonder Bread. And I’m not talking the Wonder Bread crust, here, I’m talking the starchy, bleached, could-serve-as-a-Bob-Ross-painting-canvas, middle of the bread, white. Which is more than a little odd considering that both GTArcade and NetEase have Chinese origins.

This skin tone issue was only compounded by the male voices. Nevermind the fact that it seems the male character voices and female character voices were each done by one person, who then tried to speak in various accents. That was pretty excusable. No, what really signed the game’s death warrant in my eyes was that after not integrating any skin tone aside from “Librarian pale” they had the actual audacity to label one of the voice selections “hip-hop”. And to make matters worse, the voice sounded less “hip-hop” than “Weird” Al Yankovich singing “White and Nerdy”.

So, after I got through all that, I had to set the phone down for a while and just shake my head. Had I not been tasked with reviewing the game, I probably would have deleted it right then and there, and never thought about it again. I was even more annoyed that the game kept freezing when I clicked the button to download a “non-critical update”. But, dear reader, I owed it to you to see if the game had any redeeming qualities.

The short answer is, “Meh, I guess?” It wasn’t enough to get me to want to play the game long term, but then, I’ve never really been that much of a Monster Hunter fan anyway. I’ve always WANTED to, and I actually enjoy watching people play it, but I’ve never felt real engaged with the controls, and had issues with the camera, and other various complaints that just didn’t make the game a very good fit with me. That being said, I can appreciate the appeal, and acknowledge that others like it, and that’s fine. Not every game is a great fit for every person. So, let me give you a little breakdown of the game, so you can make some sort of informed decision.

As I alluded to a moment ago, Rangers of Oblivion has more than a small touch of the Monster Hunter genre to it. Given that Geralt of Rivera is going to be featured in the MMORPG Monster Hunter World as part of an update in early 2019, I guess I shouldn’t be terribly surprised at NetEase sliding his likeness into this title.

The titular Rangers are an organization of warriors who are unique in that they hunt terrifying monsters called behemoths. In fact, only Rangers, the army, and select merchants with special permits are allowed to travel between towns because of the threats that the behemoths present. The Rangers wield a variety of weapons, which you can choose from at start. Don’t worry if your initial choice doesn’t end up working great for you, because early on you get a bag containing a starter for each weapon, and you can switch between them at will.

There’s the twin-sword style, giant sword, bow, staff, punchy fisty things (armored gauntlets I guess), and lances. Each style fights a bit differently and has its own strengths and weaknesses. Fighting styles can be further individualized by what “Wild Soul” you equip. These are light, shadow, titan, nature, and mystic. Each of these subtypes has a set of particular Gods that they represent, such as the “Titan” Wild Soul, Tyr, God of War. Each God has their own special abilities that they grant the Rangers. Wild Souls are enhanced and obtained through the fighting of Behemoths, who seemingly eat them.

So, you run around killing behemoths in the wilds. You can access the wilds only by speaking to an NPC and using a “hunt ticket”. You obtain hunt tickets gradually over time, and can also purchase them from the game’s cash shop. Occasionally you’ll get special hunt ticket packs that you can use for a set number of tickets, 15 or 20 I’ve found so far. Typically these are obtained from quests.

There is a lot of NPC interaction in Rangers of Oblivion. For the most part this is a good thing, but I suggest either turning off the sound, or ignoring the subtitles. It seems the scripts the voice actors were given didn’t match up with the one the game developers had, because often times the wording is drastically different when comparing the spoken to written forms. I found this to be jarring and off putting. NPCs are more than just quest givers, though. Some of them can actually become your companion for doing hunts. Many of them also have a “friendship level” that you can affect by giving them gifts. If you want to know who likes what, you can ask them directly, or check with the local bard at the tavern. They love to gossip, those bards.

The game also has a pretty robust looking crafting system, which as I understand it is pretty typical of Monster Hunter titles. You can mine nodes, and harvest from beehives, or collect materials from monsters. I imagine you can also chop at things with an axe (though I never got to that point).

The controls in the game I have mixed feelings about, mostly because combat just feels really button mashy to me. Again though, that could just be a me thing. There is a joystick style thumb control on the screen, but it’s a stationary one. I’ve said before I’m not real fond of these, and this game reminds me why. I understand why it’s that way though, as swiping an area off of the joystick will rotate the camera. There are other ways to control your avatar outside of combat. You can tap anywhere on the in game map, and you’ll walk to that location. If you go to the world map, you’ll even travel from town to town automatically in this fashion, which is fairly useful.

Another way to control your character is by simply clicking on an NPC or location on the map. Want to go to the weapon vendor? Click their name and you’re off! Finally, if you have a quest active, you can click on the quest info panel on your screen, and you’ll automatically walk to your next objective. Infinitely useful. Best of all, with any of these methods, you can eventually unlock a mount. Just click the horseshoe at the bottom of the screen and you’ll mount right up, even if you’re currently on your way to an objective.

In combat movement works a little different. You mostly just have the joystick to use, unless you’re using an attack that auto-runs you. One feature that is pretty crucial when fighting behemoths is the auto-lock. This keeps your camera aimed generally at the behemoth, allowing you to run in circles around them, use the dodge roll button etc.

It’s only moderately more interesting when the target actually moves, trust me.

So, what can I say? I don’t necessarily feel like GTArcade or NetEase were trying to be intentionally racist. I do, however, feel like they were grossly culturally insensitive. If it was JUST the skin color thing I could have overlooked it I think, but with the explicit use of a “hip-hop” label for a voice that had absolutely nothing to do with hip-hop, I just really wasn’t impressed. Nor did the blatant IP theft of Geralt do them any favors in my eyes (Speaking of eyes, if you look really close, the Geralt preset even has sort of cat-like eyes).

For a mobile game, the graphics are admittedly good. There’s plenty of other titles these days that can make that same claim, but aren’t stealing material from others. The fact it’s a Monster Hunter clone isn’t so bad. In fact, one of my predictions for 2019 is that we’re going to be seeing a LOT of these types of games (along with asynchronous multiplayer games, like Dead by Daylight). I’m not sure if we’ll see so many of them for mobile, but I would pick pretty much any of them over this one, if they do spring up. I give Rangers of Oblivion overall 2.5 coconuts out of 5. It didn’t do anything in particular to shine, and the cultural insensitivity really put me off. If you’re really hard up for an Android or iOS platform Monster Hunter style game, Rangers of Oblivion could work for you. So long as you don’t mind looking like someone who’s never heard of the sun, let alone seen it.