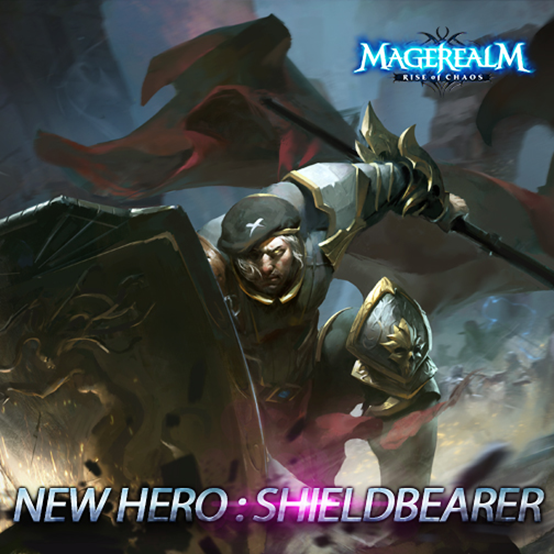 Magerealm, the hit action MMORPG from GTArcade, is ready to introduce a new Hero! The latest additional to the Realm is the Shieldbearer, a veteran soldier wielding a flail in one hand and a massive shield in the other.

Shieldbearers are no strangers to conflict. Those that are selected to become Shieldbearers are all veterans of war. Having survived countless battles, they understand the ways of the battlefield more than anyone. A Shieldbearer trains rigorously in order to wield their massive shields in combat without hindrance. Their shields can be used to deflect the most devastatting attacks, as well as to crush anyone foolish enough to get close. Shieldbearers are often deployed to protect high value targets or defend important positions. A Shieldbearer can greatly enhance the capabilities of his allies, enabling them to hold out against overwhelming odds until reinforcements arrive. When enemies see Shieldbearers in a formation, they know they are in for a long and tough battle.

Shieldbearer is a defensive hero that brings to your team will significantly increase your durability. Both his Guard Stance and Shield Wall will provide great protection for your entire team. Guard Stance is espesically valuable against enemies with a lot of control effects, while also providing an offensive boost with increase hit rate. Shield Wall gives a near permenant 30% damage reduction to your team, and can also silence attackers to reduce their output. Second Wind, his 3rd passive, can periodically heals him or give him a significant defensive buff.

Shield Slam and Shield Sweep are AOE attacks with that can control the battle with their stun and knockback effects. His Shield Sweep will keep melee enemies at bay by knocking them away and slowing their movements so they can’t re-engage immediately.

Are you excited to try out this new hero? Follow Magerealm on Facebook and visit the official forums to get the latest news and participate in rewarding events.