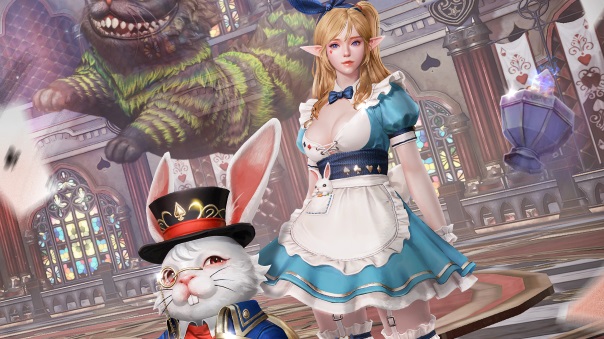 In online games, one of the smartest things you can do in collaboration is pairing up with an IP that has a different look and feel to your game. You introduce your fans to something they either weren’t expecting and in some cases, aren’t familiar with. Netmarble drops a new update today in Lineage II: Revolution,  “War in Wonderland”, that is themed around Lewis Carroll’s Alice in Wonderland. Alice in Wonderland was one of my favorite stories as a much younger person, so this was a really cool thing to see. It was certainly unexpected. Varot the curious cat is responsible for this, and now players can step into Wonderland, and join forces with Alice to save her world. War in Wonderland does more than just add a new dungeon or two though. There are some other fascinating parts to this update. I will say though, the dungeons were very interesting and designed well. The aesthetic of the card soldiers was something unique for the game but still done in the art style of Lineage. All told, they looked fantastic.

But first, there’s a new Temporal Rift dungeon: Alice’s Dream. In this dungeon, players of level 10 and higher can delve into it, encountering weird animals, the card soldiers, and Cheshire Cat as the final boss. However, there’s another dungeon worth mentioning, Adena Vault – Queen’s Treasure Chest. At level 35, you can enter this dungeon, where you do battle with a Card Captain, that occasionally summons some allies to help him. I was only hitting him from 1-10 damage, but the more I hit him, the longer my combo, the more Adena I racked up. Occasionally, Adena Chests also spawn, and you should run over to get those as well. The idea is to defeat him before the timer is up. It was difficult but doable.

There’s an update to Cloaks and Costumes today too. Cloak and Costume stats will now be categorized into ‘collection bonus’ and ‘equipped effect’ items. Collection Bonus items apply its bonus regardless of the player’s loadout, while Equipped Effect items only activate once you equip them. So that looks to mean simply having the collection items will be a benefit, regardless of whether you use them or not, which is nice. However, once a player has collected all the War in Wonderland costumes, they can expect a 30,000 CP boost from them. Speaking of which, there are new Alice-themed items in Lineage II: Revolution. There is an all-new Mount and Agathion as well as the 3D Wonderland Wardrobe Tickets. These let players try on event costumes for a limited time. The new Agathion is a Cheshire Cat (SR) and it looks pretty damn adorable. The new mount is Elnagandr (which is also the World Boss), which can be purchased, is definitely not cheap. It looks gorgeous, but clocks in at 69.99.

There are also new monsters invading this world, such as rabbits from Alice in Wonderland, flooding in that need to be dealt with. There’s also a mighty new Event World Boss, the above Elnagandr. These appear in the second half of the month, so I’d expect to see them shortly. Killing these monsters also leaves special items when defeated, so they’re worth keeping an eye out for. There is also the Wonderland Costume bundle, which comes with the Alice Hair Costume Box, the Alice Outfit Costume Box, Alice Weapon Costume Box and 30 Topaz. This comes to 29.99. These are a little on the high side for me, but they do look incredible. I also think the cloak stats are amazing, and it’s worth hunting these down in-game.  If you don’t have the CP to enter these dungeons, don’t worry – as long as you meet the level requirement, the game will give a CP adjusting buff to make sure you can enter. This is something the community has been asking about for a while now, and I imagine it will continue to show up for collaboration/crossover events.  There will also be some free stuff to acquire in-game, from Red Diamonds to materials to craft a full Grade UR Weapon, and more. This is a great time to come back and take a peek at Lineage if you’ve been away for a while.