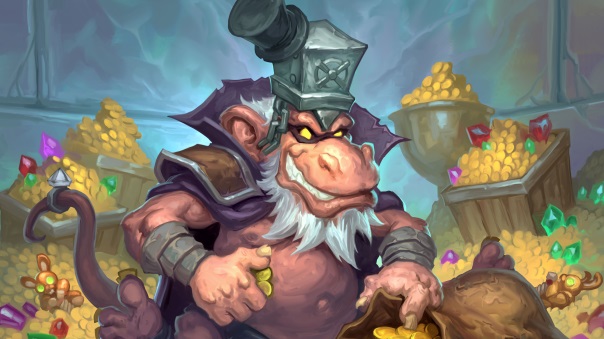 The vilest villains in Azeroth have teamed up and are plotting something horrific, involving the floating city of Dalaran in Hearthstone. This story begins in Rise of Shadows, and with the 135 card expansion comes plenty of new keywords and mechanics to shake up gameplay like never before. Cards like Schemes that grow in strength the longer they’re held in hand, and Lackeys – 1/1 minions that make up for their lack of power with incredible Battlecries.

The next Hearthstone single-player experience will arrive in May and is the most ambitious Solo Adventure for the card game yet. Five chapters will be playable, the first of which will be free for everyone. Further chapters will be unlocked for 700 gold each, or purchased in a package for 19.99. Players will earn three Rise of Shadows card packs for every chapter they complete, and more rewards await those who finish all five.

For a limited time, players who log in to Hearthstone will get a free copy of Archmage Vargoth (Must log in by July 9th. One per account), the wise and powerful Kirin Tor leader. Harnessing fearsome, uncontrollable magic, this four-mana Legendary minion recasts a friendly spell at the end of his controller’s turn, with targets selected randomly. Starting today, players can also begin to complete a series of limited time quests to earn up to 12 card packs—including 5 Rise of Shadows packs. In addition, from April 9 through April 16, players can purchase the Shadow Bundle, containing 9 Rise of Shadows packs and an Arena ticket for $9.99.

“With Rise of Shadows, we’re kicking off the biggest story we’ve ever told in Hearthstone and offering players a bunch of wicked new cards to get crafty with,” said J. Allen Brack, president of Blizzard Entertainment. “This expansion also marks the beginning of a brand-new year of Hearthstone content—the Year of the Dragon—and we have a lot more in store for players in 2019.”