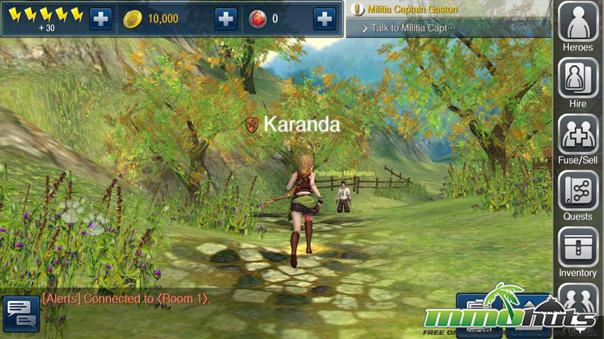 Diamond in the Rough:

As an avid RPG fan, I have spent a fair amount of time on my Galaxy S4 (and my iPhone before that) playing mobile RPGs, though generally single player offerings that had no real online content. I have tried a few of the more recent, super popular ones like Brave Frontier. I thought the idea of collecting monsters and heroes like Pokemon was an interesting concept. However, it became incredibly tedious and time consuming, and stopped being fun. It seemed like if I didn’t invest absolutely all of my time into climbing these towers I would never get anywhere; that’s not fun at all. However I am familiar with Nexon, and have played several of their products over the years. When I was told they were making a Cellphone MMORPG, I was filled with a mixture of both dread and anticipation. 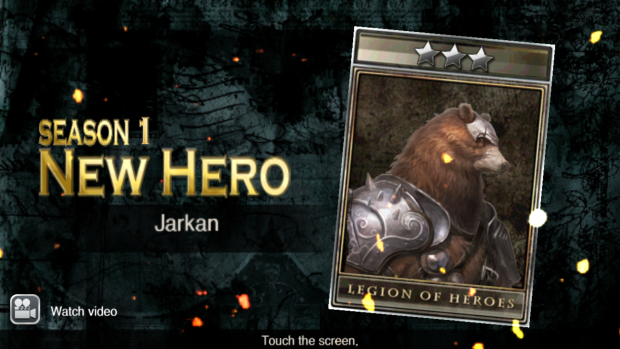 My fears were unfounded: Nexon put a lot of work into the game and it shows. In Legion of Heroes, you pick a starting character and set out into the world to right wrongs and triumph over evil. You complete quests, can join a guild, and have your squad team up with friends to conquer towers filled with treasure and challenges. It has a seamlessly integrated social network, and really does some ground breaking work in the area of portable phone gaming. It, unlike many other games of this type, does not purposely make things too challenging or too aggravating to deal with. Each map concludes with a gift that in some way can help you, like tickets to hire more heroes, exp bonuses, or money! Everyone loves money.

Plus my squad consists of an attractive archer, a lich, a nurse, an axe-wielding maniac, a monk with a bag on his head, and a Bear in armor wielding a cannon. If that doesn’t strike your fancy, I’m afraid nothing will. 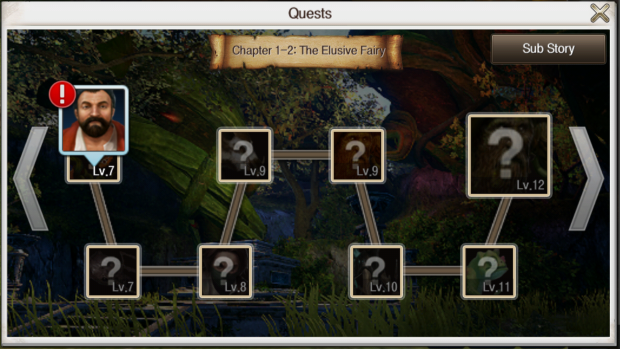 Legion of Heroes is a turn-based RPG, which lends itself quite well to gaming on a cellphone. What it does have, which is refreshing, is an overworld and a map you can walk around. Unlike games like Brave Frontier, there is actual interaction with the world around you; instead of just clicking on a zone, and then clicking on the battle, you wander the land in true MMO fashion to complete quests and do battle. On your screen there will be a current quest, and you can click on it to walk you to the NPC, object, or monsters that you must fight. Nexon really outdid themselves. 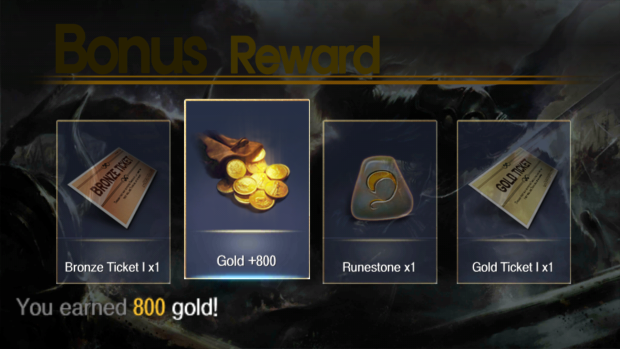 In Legion of Heroes, you have a squad of characters that you can recruit through tickets, which are obtained as rewards for completing quests and for victory in combat. They are not especially hard to get, though gold tickets appear with less frequency. There are bronze, silver and gold, and each have their own heroes that can be gained, each with a star rating up to Double Gold Star. But if you see someone you like in the lower ranges, like in other cellphone games, you can promote them through a fusion system. Using the same type of character (same name) will yield greater exp towards promotion. There are some points in the story where you cannot progress until you have gained more characters at certain levels; I suspect this is so you have a squad varied and strong enough to handle whatever comes next. 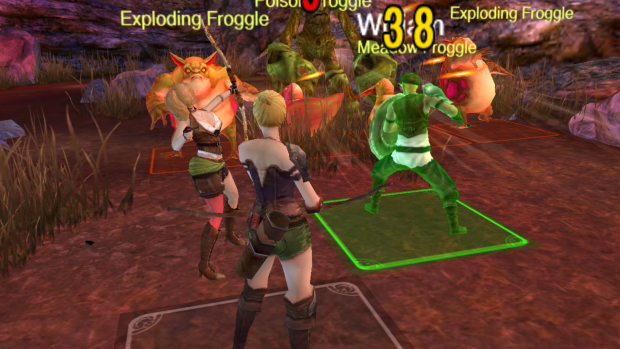 For combat, think about games along the lines of Final Fantasy Tactics or Tactics Ogre. You have a squad of heroes in a formation that you set up, and the start of battle is started with a coin flip; either you or the enemy team gets first dibs. When your team is hit, you fill a gauge on the side of the screen for “Rage”, and each hero has a unique skill that costs a certain amount of Rage. I chose the Archer and her main attack is a volley of arrows that does tons of damage the more it is leveled. My axe-wielder tosses an axe into the air and slams it down on one target. My Lich has a silence for a turn, which helps immensely on bosses. Conversely, I have another bow-wielder who only shoots a square plus the square behind it for a large amount of damage. Another very important thing to note is that there is a form of threat, or aggro in this game. In combat, dealing damage will gain you “Enmity,” displayed as a percentage number. This is the percent chance that the enemy is going to focus that hero. So I advise caution if one person on your squad does all the damage, make sure you have at least one healer to save their life! 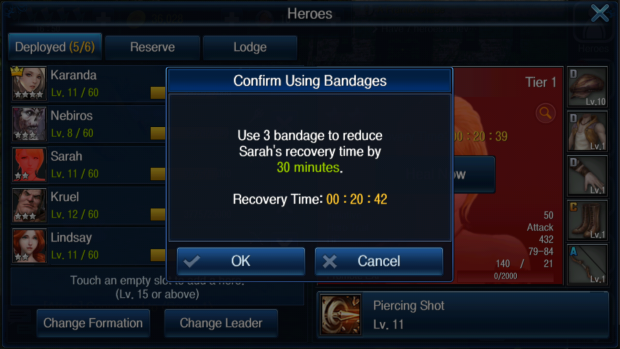 Combat is not just picking a target or the special skill and going from there. There is one more very important aspect about combat. You can request help from other players, where an NPC joins your team and automatically fights on your behalf. And if a member of your team dies in combat, for a fee of gold, you can bring another one of your teammates out as an urgent support. There are skills and characters for every situation, and there is no limit to what you can do. Each time a hero levels, you can level that unique skill for a cost of gold. Do not fear that you will run out of gold, because it is plentiful. At level 10 you can join the military and request a military stipend. If you do, you receive 50,000 gold and 3 gold tickets to trade in for heroes. I also receive a military stipend in the mail at regular intervals, providing me with more gold. This has helped in many ways, other than simply leveling skills. There are other systems in place, such as upgrading your equipment. It is ranked from D-S, each grade better than the rest. You have several equipment slots, and while it may not always be wise to level your starting/early game gear to S rank, it can help you tackle greater challenges for higher level rewards. But the higher the grade you seek, there will be a chance of failure. I didn’t see my first S until several days into the game. 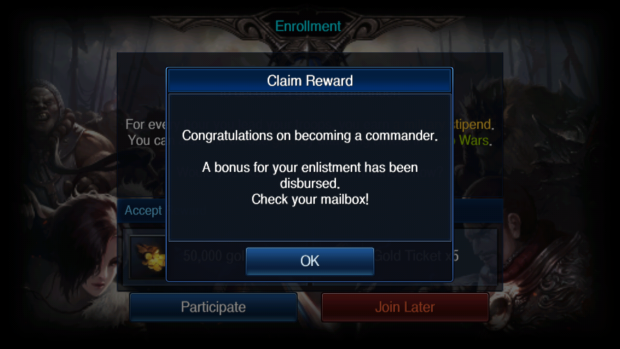 However the game is like any other MMO; there is more to do than just quest. There is presumably an end-game, and there are several chapters to the main story. You won’t blow through it all in one sitting . . . believe me, I tried. You’d have to spend money/unlock elixirs to do that and even then, I don’t think it’s quite possible to do. Each time you enter combat, you lose a point off your morale gauge. When that runs to zero, you can’t enter combat until it refills which is a good way of saying “take a break from the game for a bit.” However, purchasing elixirs with money, or unlocking them in the game, will refill the gauge and let you go on with things as you see fit. You can look for ways to unlock them in the achievement list and seek those paths out if you so wish. I have a few on my file right now that I’m saving for the right time. You can also use gold (in-game currency) to recharge your morale, which is a nice because it’s a pretty abundant source. 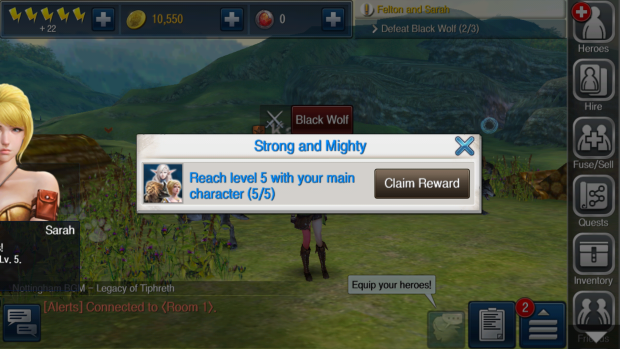 But there are many other things you can do. There’s PVP in the coliseum, or you can participate in small wars for gold and prizes. There is the tower, where you can join up with other players and take on groups of monsters, where the rewards are better than average. I did a few of these missions and breezed through them (largely in part to my level 50 Guild Leader taking me through them), and from what I understand there are other group activities one can do such as raids, which fills me with delight. I love MMOs, and being able to find a great one on a mobile I thought would be all-but-impossible. It has lots to do and see without it being an overabundance. It’s more interactive and thought provoking than many other RPGs that one could see on a mobile device, a breath of fresh air. There are microtransactions, but they do not feel like they dominate the game in any way to me. For example, there is a currency called “Hearts” that you can acquire through gameplay, or you can purchase. You can hire heroes using these as well, and if you manage to get 200 of them, you can hire some truly fantastic heroes, like Black Pearl, or Drake. You “can” spend money to get these things, but they in no way detract from the game if you choose not to. 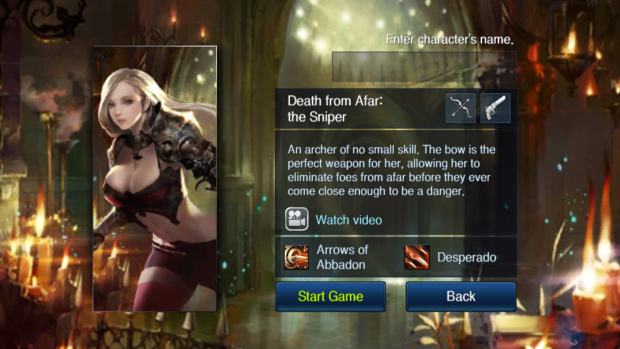 I really and truly feel this is going to be the next big thing in cellphone gaming. I think Nexon Mobile stumbled onto something really fantastic here, and I hope they don’t drop the ball! After trying several phone games to compare it to, nothing really stacked up. The grind for heroes at the start is not too terrible, that might change as the game progresses, but it tells you when you need to pay attention to something in your menu, if a hero dies (which probably won’t happen all that often) you can wait for them to revive, or you can use bandages, which pop up more than frequently. There are little things, but all in all, this is a very solid title that anyone with a smart phone should consider. I honestly did not find very much wrong with this, despite how hard I looked. It is a little generic in some of the naming conventions, but it makes up for it with interesting character design, and lots of things to see and experience.

I was really impressed by how this game looks. I don’t do a lot of mobile gaming outside of my Vita, but a fully 3D mobile MMORPG sounded too good to be true. The graphics, while not earth-shattering, are very solid, and everything I’ve seen looks great so far. Easily one of the best looking mobile games I’ve seen in quite a while. I see big things for this game and look forward to journeying forward in the closed beta to see what the late game will have in store for me.

As a phone-based game, there is only so much you can control. But the clicking/touch screen interface was very strong, and only occasionally did I try to move somewhere and get stuck on a fence, or a rock or something of that nature. The auto-run feature was definitely a good idea, and in this instance it makes a great deal of sense.

There are many things one can do in this, but it isn’t an over-saturation. It’s hard I imagine to find that perfect balance of “stuff” versus “too-much stuff” but I think this is a pleasant balance. And you don’t have to get tickets or pay real money just to do any of it that I have seen yet. Most of what I have experienced is level-based or something to that nature. One of the problems I had in some mobile RPGs were you had to get tickets. Tickets drove the game. And to get them more often than not you had to play nonstop or spend real money.

I will say the music is great. You can even purchase it some places on the internet, according to the game! (A humorous plug, I thought) However, my qualm with it is while it is very good music, it does not always fit the situation. If I’m in a boss battle and it’s a life or death situation, I don’t want to hear “Waltz of the Sugar-Plum Fairies.” That was a situation I was in several times, and while comical, it did not really sit well.