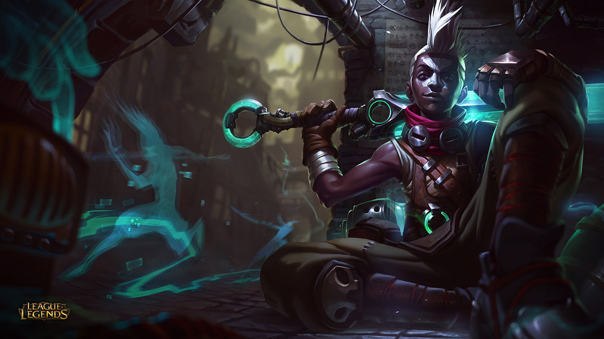 Major news from Riot Games today as patch notes for League of Legends Update 5.9 arrive, along with the champion reveal for Ekko, The Boy Who Shattered Time, new skins, an Ashe rework and more! For the full Riot patch rundown don’t miss their latest video.

Ekko will be arriving shortly on the PBE but for those interested in his kit after being dazzled by the recent CGI trailer, here you go.

Passive: Z-Drive Resonance
Ekko’s damaging spells and attacks build up Resonance stacks on his enemies. Every third attack against the same target triggers Ekko’s passive, dealing bonus damage and slowing his enemy. If he triggers his passive on an enemy champion, Ekko also gains a strong movement speed buff.

Q: Timewinder
Ekko throws a device in a target direction, damaging all enemies along its path. Once it reaches max distance or hits an enemy champion, the device expands, creating a field that slows all enemy and neutral units. After a moment, the device contracts and rushes back to Ekko, dealing extra damage to all enemies in its path.

W: Parallel Convergence
Passive: Ekko’s basic attacks deal bonus damage to low health targets.
Active: Ekko opens a time rift, creating an alternate reality copy of him that tosses a device to a target location. After a delay, the device expands into a broad slowing zone. If Ekko enters the sphere, it detonates, granting him a shield while stunning all enemies inside.

E: Phase Dive
Ekko dashes a fixed distance towards a target area. Once his initial dash has ended, Ekko gains greatly increased range on his next basic attack, and blinks to his target to deal damage and apply on-hit and spell effects.

R: Chronobreak
Ekko rewinds time, briefly turning untargetable and invulnerable before reappearing wherever he was a few seconds ago. Once he reappears, Ekko recovers a portion of the health he lost over those few seconds while dealing tons of damage to all nearby enemies.

Ashe is also seeing a partial rework of her kit, further owning up to her slowing styled kit while giving her some downright dangerous sustain damage for extended duration by enabling her crits on targets slowed by her abilities. The following skins have also been teased: