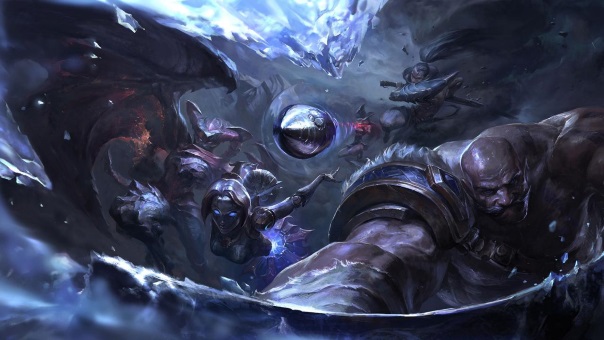 There were some last-minute changes added to these patch notes, so I hope I hit all of them (and don’t hit the stuff I’m not supposed to because it’s gone!) but the 8.12 patch notes for League of Legends are focused primarily on the Fighter/Bruiser role, as well as Shields/Shield-based items. A few items were added to the PBE that were removed (for now) that were going in, but as it turns out, over the last few patches, the Fighters of League have only grown in strength. Those items will have to be re-tuned or perhaps not brought in at all. It’s unfortunate for me because I really liked the idea of them, and when I’m not tanking in bot lane, I’m hanging out in top lane, trying to throw hands. Before we get started, I’d like to have a moment of silence for another powerful tanking item, as it goes the way of Heart of Gold and Force of Nature – Banner of Command. It’s an item that was either almost never used or so meta-warping that it made things unreasonable for solid, competitive gameplay. Banner was an item that was incredibly powerful and I saw it used in some fascinating ways, not just as a support item. It was also used midlane to offer a very powerful early push for Mages that did not need to rush a damage item. So, goodbye my friend. You will be sorely missed.

One of the overall themes of this patch like I said are Shields/Shield Items. The power of Shields is undeniable, and on a Fighter it’s even more frustrating. Overall, shields/shield abilities are being reduced, including the Forbidden Idol line, to make some of these shields a little more reasonable. Fighters are already tough, not quite a tank, but with a lot more damage than those supports have. So I’m a little on the fence here. I love shields, I play a lot of Janna, and top-laners that utilize shields in their strategy. Janna, Lulu, Karma, and Orianna all saw a shield duration nerf, and with my completely rational hatred of Lulu, this made me happy at least. However, I was a little disappointed that more warriors didn’t see actual changes in this patch. But warriors, no matter where they stand on the map, saw some changes. This discussion will no doubt not have everything – I will include the patch notes before for all the major numbers/updates not included here.

Before I get into the Warriors and the ones I find most interesting, Ezreal is getting another nerf! He deserves it, too. When will the Ezreal rampage be solved once and for all? This time, his armor was reduced (25 -> 22). This should be the final major change, to allow players to actually bully Ez out of lane without him hitting the major power spikes he needs. Another interesting choice is Elise, who saw her Human/Spider form movement increased (325 -> 330 and 350 -> 355), as well as a damage increase for her Human Form’s W, Volatile Spiderling (55/95/135/175/215 ⇒ 60/105/150/195/240). Apparently, Elise has been underperforming her jungle brethren, which is fascinating to me. I always hated seeing Elise in my games, because her spider form burst was just absolutely nuts. But I almost never saw anything in the human form. Maybe it was necessary after all. Lee Sin buffs? Lee Sin buffs?! Safeguard/IronWill is seeing a Cooldown Reduction (14 seconds -> 12), and his E, Tempest, is seeing a slight damage boost (70/105/140/175/210 ⇒ 80/120/160/200/240). I’ve never been a fan of dealing with Lee, but honestly, after the Warding Totem changes, he probably needed it. But that won’t change my saltiness one bit.

Let’s talk Poppy though – Overall, the Q cooldown was decreased, so was the passive cooldown. She also received a very slight Ratio bonus to damage to said Q, Hammer Shock (.8 bonus attack damage -> .9). This applies to both the initial cast and the detonation. The cooldown on Hammer Shock also went down (9/8/7/6/5 seconds ⇒ 8/7/6/5/4 seconds). This is to overall improve her late game power, where she kind of lacks. Iron Ambassador, her passive, also saw some serious Cooldown Changes for the late game (16/13/10 seconds (at levels 1/7/13) ⇒ 16/12/8 seconds (at levels 1/7/13). I’ve always thought Poppy was kind of strong in the early game, a sincere lane bully. But as the game goes on, she kind of falls off. I think this is a step in the right direction. The other major Fighter change goes to Yorick. Yorick was kind of in a weird (bad) spot. His kit didn’t really have any bonus AD ratios. The Sterak+Trinity Force Combo works for other Fighters (because they had AD bonus ratios somewhere), or they at least have other options. Yorick however, does not. As it’s basically his only go-to, she’s seeing some love this patch. One of the coolest changes goes to his pets. Mist Walker and The Maiden‘s stats now update when his stats change! That’s going to be a real game changer. In addition, Last Rites, his Q,  sees a Cooldown Reduction (7/6.5/6/5.5/5 seconds ⇒ 7/6.25/5.5/4.75/4) aimed at the late game, like Poppy.

Speaking of Sterak’s Gage, It’s Passive now grants bonus attack damage instead of base attack damage (You’re welcome, Yorick)! It was supposed to be a juggernaut item but wound up paired with Trinity Force in so many situations. It’s a sidegrade for most Fighters, but for champions like Yorick, it’s a serious boost. Gaining bonus AD ratios in their abilities rather than Spellblade procs, this is a pretty big deal.  Though I do think non-TF Fighters can still very much make use of this. (Grants 50% of base attack damage as additional base attack damage ⇒ bonus attack
damage). Another fine change here is Athene’s Unholy Grail, which now converts more damage into healing charges (25% pre-mitigation damage -> 35% pre-mitigation damage). This is, in a way, an invisible buff to Chalice of Harmony. With the Forbidden Idol updates, Chalice should start showing up in lane builds. Then, when you upgrade to Athene’s, there’s going to be a lot of happy laners with this, I think. There are a lot (and I mean a lot) of Shield Items that saw adjustments in this update.

There are also some miscellaneous changes that are certainly for the positive. A big one is Last-Hit Assistance, which states that missing a minion’s last hit by 4 (now 3) damage will still grant you the last it. It’s designed to make it a tiny bit more forgiving for people learning to last hit, as it’s such an important tool to know no matter what lane you’re working in. The New Player Experience also changed for the better, as the Tutorials were updated. It’s still being worked on, but once it’s 100% implemented, it should be a viable approach to starting the game and learning champions. In addition, Hail of Blades also saw some changes. Instead of being 50-100%, it’s 75-120% bonus attack speed. It was considered underwhelming, and this steroid to its proverbial arm should really help make it worth using. The only other thing I’m wondering about isn’t really related to this update – it’s the Aatrox teaser! Surrender@20 has the details, which can be found here, Aatrox is kind of boring to use, but he’s always been solid and interesting; just… boring. That’s the risk you have with auto-attack champions, in my opinion. But these are some of the most important bits in 8.12! What do you guys think? Let me know below!