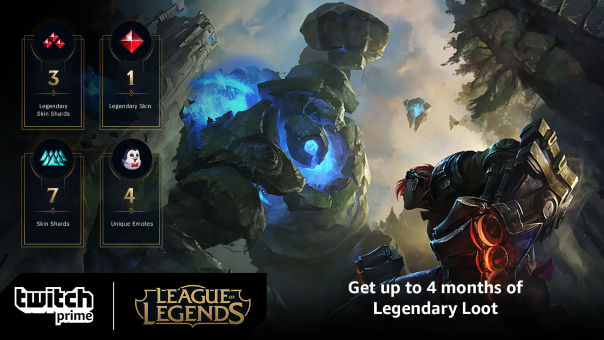 Twitch Prime and Riot Games have teamed up to bring four months of exclusive League of Legends loot, starting today. Prime Members can acquire a Rift Herald’s Capsule that contains two random Skin Shards, a random Legendary Skin Shard, and an exclusive emote. Once members claim the first capsule, they’ll automatically receive another capsule every 30 days for four months: A Rift Herald’s Capsule, Red Buff’s Capsule, and Blue Buff’s Capsule and a Baron’s Capsule. The final capsule contains a random Permanent Legendary Skin, in addition to another random Skin Shard and exclusive Emote. Players will have until August 28th to claim their first capsule.

“League of Legends has been one of the most-watched games on Twitch for years, and partnering with Riot to offer four months’ worth of League of Legends loot to members is the kind of amazing content we get really excited about,” said Larry Plotnick, Director, Twitch Prime. “We’re striving to make Prime the absolute best deal in gaming, and we’re off to a big start in 2019—we’ve already offered our members more than $900 worth of games and content this year. And that’s just the beginning. Stay tuned, because there’s a lot more goodness coming this summer.”