In an attempt at keeping in line with the “sail” theme of this latest Closed Beta, I figured I could put together a bit of a guide on the various ships in ArcheAge. Personally, the sea-side of things is what I love most about ArcheAge. There’s only one other MMO that I’ve played that has anything that comes close to ArcheAge, and that was Darkfall. There’s just something fantastic about being able to see a massive galleon on the shore and knowing you can hop on it and sail around and possibly do some pirating. This is what online gaming freedom looks like. 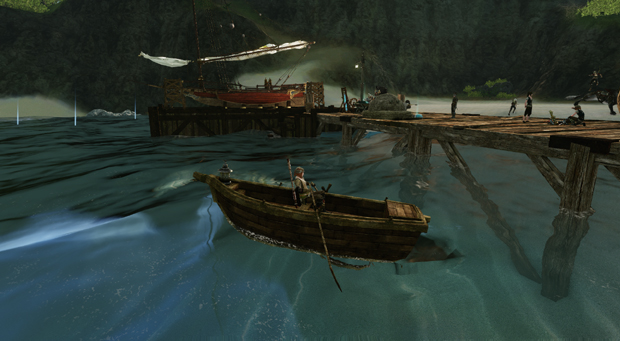 The first ship you’ll come across will, more than likely, be a rowboat. This is because, early on, you’ll be getting one for a quest. The neat thing is, you get to keep the boat so you’ll get your own ship early. The downside, though, is that the rowboat is incredibly slow and can be too annoying to use once you’ve been spoiled by a speedboat. It’s not useful for much, and you’ll probably only use it on rare occasions. 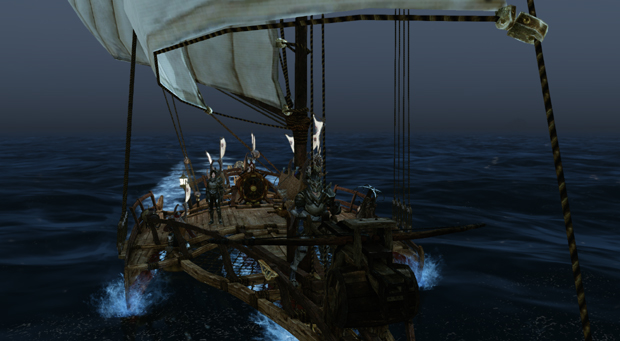 Chances are, you’ll run into one of these being pulled along the land at some point.

Next is the Clipper, sometimes referred to as the speedboat as it’s pretty much the fastest ship in the game. It’s small and comes in two variants. One with a harpoon and one with a canon. Generally speaking, the harpoon variant is much better – though both are useable and fun. Chances are you’ve seen a Harpoon Clipper pulling itself along the land at some point.

It’ll cost you fifty Gilda Star for the blueprints to build. The resource requirement is fairly low, the lowest out of all the built ships, I believe. Generally, everyone will get one of these within the first month or so of their playing so don’t be surprised when you find this is the most common ship in the game within a week of release. The deck space, which allows for a decently sized number of players to be aboard, combined with its speed and versatility make it a favorite for trade-runs and pirating. 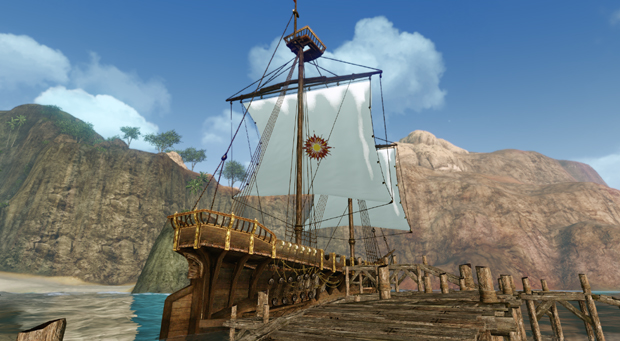 Referred to as the Cutter for the West and Lutesong Junk for the East, but also known collectively as “Galleons,” this ship is the backbone of any player navy. They’re kind of difficult to make, so a lot of Galleons are the result of collaboration between guilds and families. With a dedicated family, you can probably get your hands on the Gilda Star required to purchase the blueprints in a relatively short amount of time. The resources required, while a lot more than a Clipper, aren’t too difficult to gather. 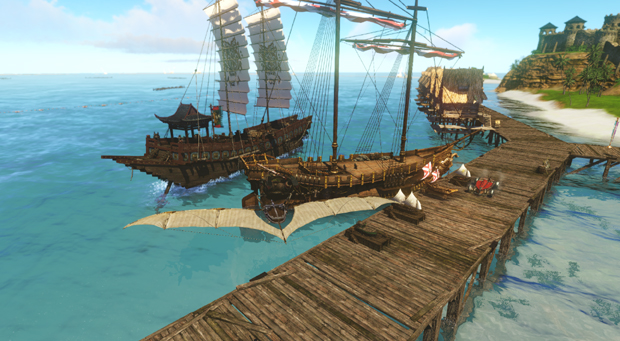 Personally, I like the look of this ship more. But I do miss the crow’s nest in the Cutter.

Similar to the Clipper, the Galleon comes in two variants, commonly referred to as the “West” and “East” variants. They both have similar stats – large size, eight cannons (four on each side), some extra cargo space. However, the West variant has a more Western design, while the East variant has a more Eastern look to it. Other differences include the buffs and abilities available to the ship. Also, the Eastern ship has a drum that can be used, while the Western has a set of bells. Oh yes, and the Western variant has a crow’s nest and the ability to climb the main mast, while the Eastern variant does not have either.

And let’s not forget the pirate variant that is about the same as the other two. It can be a lot more difficult to get it, though, as you don’t use Gilda Star to get the blueprint. 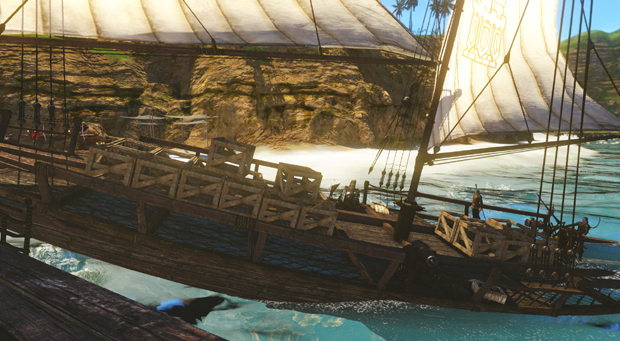 Each box can hold one trade-pack, for a total of twenty.

The Merchant ship, sometimes referred to as the Trade ship, is probably the most important ship in terms of doing trade-runs. Any group of players is going to want to get one eventually. It has a plethora of space for trade-packs, which means very few players can transport a large number of packs. It also has a bit of protection in the form of one cannon on either side of the ship, as well as a radar similar to the one that can be found on the Galleon, that helps with evading potentially hostile ships long before a confrontation begins. 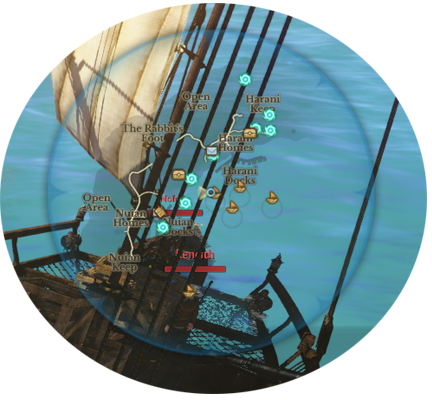 Honestly, though, if a couple of harpoon Clippers were to go at a merchant ship they wouldn’t have a hard time catching up to it. This is why you often see them being escorted, usually by Clippers of their own or even by Galleons when it comes to the larger guilds. The resource requirement is kind of similar to the Cutter, but it requires four-hundred Gilda Star’s. A hefty investment for a ship that can give you a much larger reward. 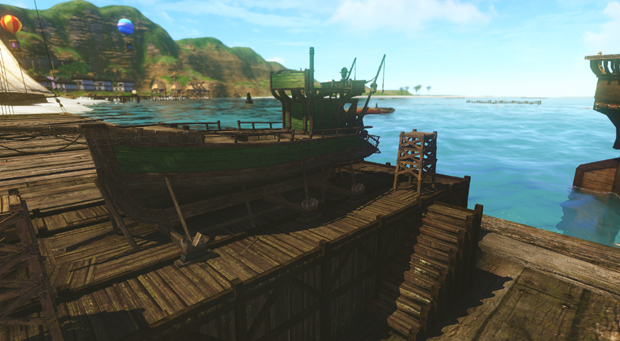 Next up is the Fish-Find Longlinger. This is a ship dedicated to fishing. It’s similar in size to the Cutter’s, and costs about the same in both resources and Gilda Star. I honestly don’t know much about this ship, as my only interactions with it are in mirage. I’ve heard a lot of good things about ArcheAge’s fishing system, so I’m guessing this will provide a nice ship for those who wish to partake in that profession.

I do know that it comes equipped with harpoons, a “fish finder,” and a few trade-pack slots. As far as I’ve been able to find, it’s the only fishing boat currently available. 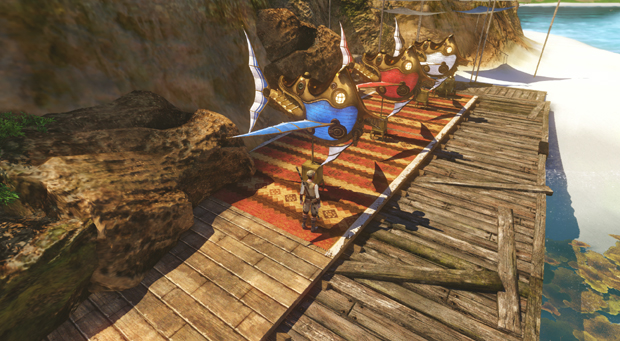 Looks pretty neat, in my opinion!

The next (and last that is currently available to players) vessel I wish to bring up is the Lapis Steamfish Submarine. I know even less about this than what I know about the Longliner. It stands to reason that it’s meant to be used for deep-sea adventuring. There’s a lot of stuff hidden under the sea in ArcheAge, including treasures, ancient ruins filled with sea-mobs, and even some unique mining opportunities. They may also come in handy while tending to your Aquafarm, if you have one. They look to be a two-seater, so there’s that. It can be equipped with special equipment, such as an air cannon, to give it different abilities. 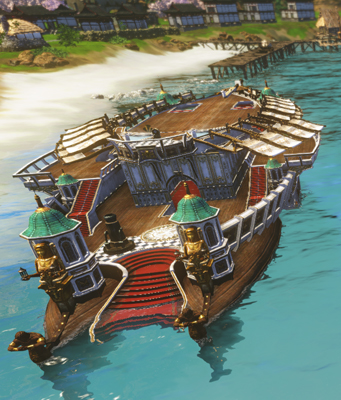 There’s also a Luxury Yacht commonly referred to as a “party boat.” This is basically a large ship meant for nothing but having fun and showing off your wealth in the world. At this point, however, I’m unsure as to whether or not it will be available to players. I did not find a place to purchase the design for one, but there is one in mirage you can go and play on (but not drive). It looks pretty awesome, though. Other ships I did not find, though I know exist in other versions of ArcheAge, are the Swan Love Boat and the Smugglers’ Rowboat. 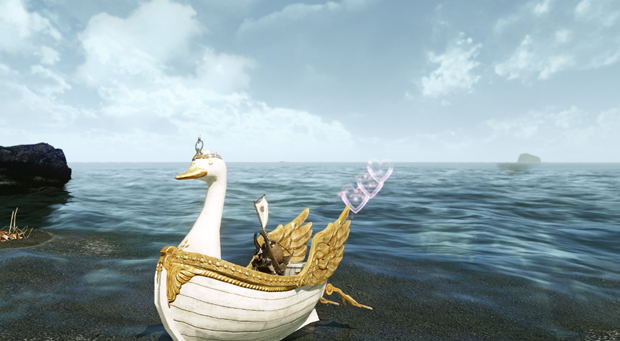 Q: How can I get the Gilda Star used to purchase ship blueprints?

You can get Gilda Star by doing quest, but also from doing things like Trade Runs.

Q: Where do I buy the blueprints?

You can find them all in Mirage – look for the blue portals.

Yes, you can find all of these ships in Mirage. You’re able to test drive and make use of almost all of the ship, as well. Unfortunately, there’s only one of each so it can be difficult to find one at times.

Q: Can my ship be destroyed?

Yes, but it can be repaired. Of course, depending on the ship, this may be inexpensive or quite expensive.

Q: Can someone steal my ship?

Yes and no. Yes in that they could jump on your ship and then drive away with it if certain criteria are met. No in that it’ll eventually despawn (or, if your ship isn’t in combat, you can manually despawn it). So it’ll only be a temporary problem as long as the person taking your ship doesn’t destroy the ship before it despawns.

Q: How do cannons work?

They use a targeting system similar to targeted player moves. You will also need Steel Ammo (cannon balls). 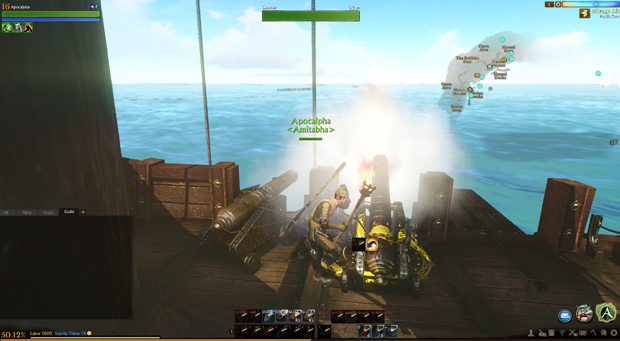 Q: Should I get a Cannon or Harpoon Clipper?

Personally, I would say Harpoon. The cannon on the clipper is basically useless after the first week or two of the server. While the harpoon can continue to be useful and fun for quite a long time. That’s just my personal opinion, though.

There are a lot of sea-faring vessels in ArcheAge. There’s one to fill almost every role you could dream of. From the small and fast Clippers, to the large and bulky Cutter and Lutesong Junk. It’s this large versatility that makes the sea-side of ArcheAge so much fun to participate in. It almost seems like a game on its own with all the content available. Hopefully this has been a good insight on the various ships found within ArcheAge.