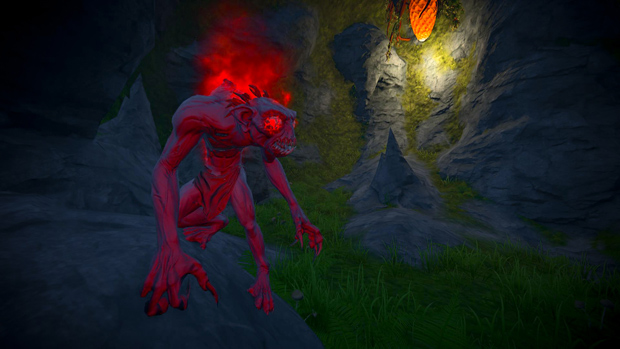 After naming Everquest Next and its sister builder of a game, Landmark, our most anticipated game of the year two years running, we decided its time to get serious about coverage. And what better way then focus on the massive changes SOE pushed to close out 2014 with a bang. Director of Development David “Smokejumper” Georgeson (@davegeorgeson)and Senior Producer Terry “Fairan” Michaels (@terryjmichaels) describe it as the largest update delivered on the game since its initial alpha launch. Most notable among its various changes are: the introduction of combat, monsters and loot, the overhaul and expansion of the subterranean cave network, and housing development systems. We’ll tackle each subject in that order. 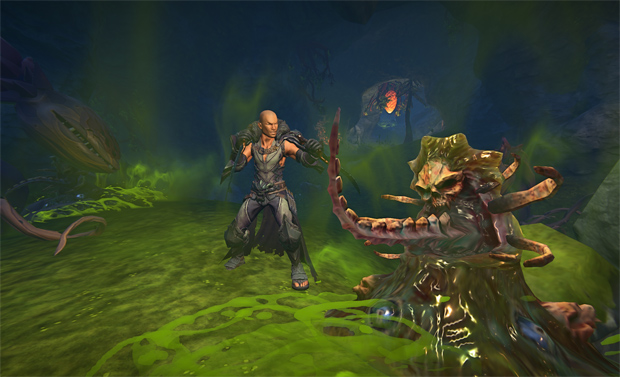 Beginning with combat… well, there’s combat now. There wasn’t before. There were no weapons, no armor, and nothing to fight. That’s all changed. Monsters exist now. They come in a variety of shapes and sizes, some immediately recognizable as fantasy mainstays and others a bit more esoteric. These monsters will be most numerous in the new underground, but we’ll get to that later. For now, the main points are this: they spawn in the wild, have behaviors determined by their AI, and will be the main focal point of the new combat systems. As described by Georgeson and Michael, the goal of the experience is to create a “gameplay loop.” That is to say, a more action-oriented character, instead of idly wandering a hillside, can equip some basic weapons and armor, find some monsters to kill, get some loot, then use it for upgrades. Whether that comes through equipping it directly, breaking it down for crafting, or trading it with other players is up to the individual monster hunter in question.

That’s the goal, anyways. A fully functioning player economy is still in the works, but the plans for it are there and they’re quite detailed. Expect to hear more about it as the year progresses. 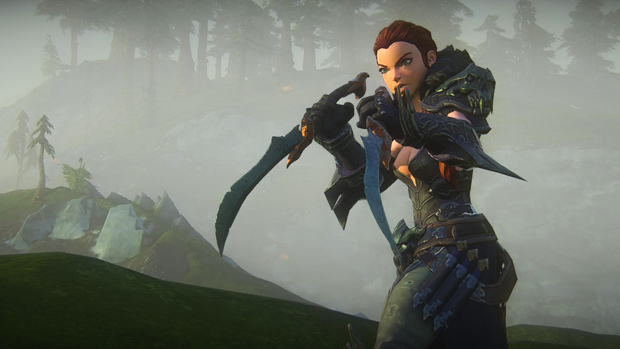 Back to combat. On the player side of things, your combat style is dictated first by the weapon set you equip. Presently, there are four sets: a pair of daggers, a sword and shield, a two-handed sword, and… sigh… a wand. For whatever reason, the fairy godmother wand is their first (and right now, only) ranged weapon option. It’s cute. Landmark is a cute game, really. It’s done in that family-friendly cartoon style that’s all the rage these days. It worked for WildStar… right? Right? 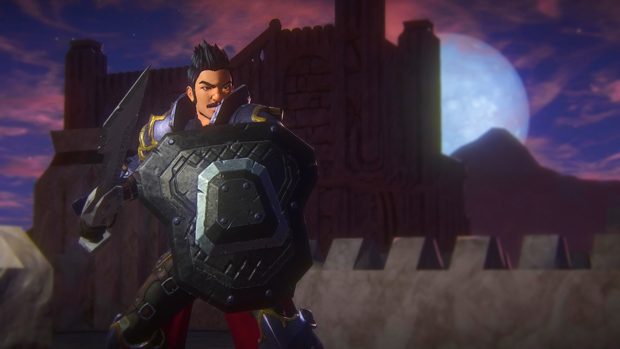 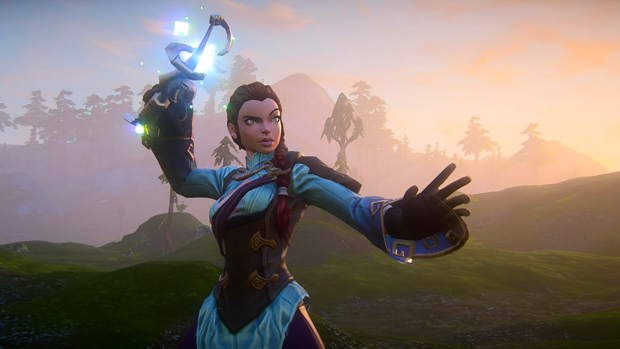 I’m sorry, I know I should be letting this go, but I’m a crotchety old nerd, and I’m not quite sure how this little pewpew stick fits into the rest of the list. While my personal preference would be to round out this list of iconic archetypes with the quintessential ranger or marksman, I could accept the wizard thing if it was at least a staff. A staff with lightning and fire, maybe. What we have instead is a wand that shoots unidentifiable particles of some kind, generic magic missile type stuff. It’s not even -bad-, it’s just not -as good- as the rest of the lineup. Our expectations are too high to settle for not as good at this point. 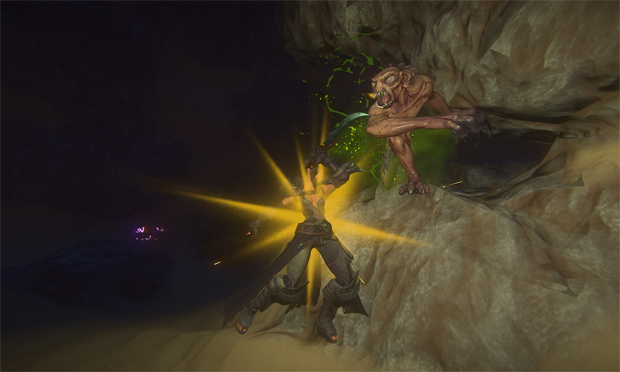 My pedantry aside, the combat looks good. More importantly, the combat looks like it -feels- good. It’s dynamic and reflex-oriented, so the generally satisfying sights and sounds that accompany it serve as the rightful cherry on top. The dagger-wielder weaves in and out of combat, the sword-and-board guy will have on-command blocking. Greatsword guy can wind up big hits that would make a young George Foreman proud. The wand guy can… do wand things. The important thing here is that combat is not simply tacked on as an afterthought, it’s a fully developed and practically standalone feature. 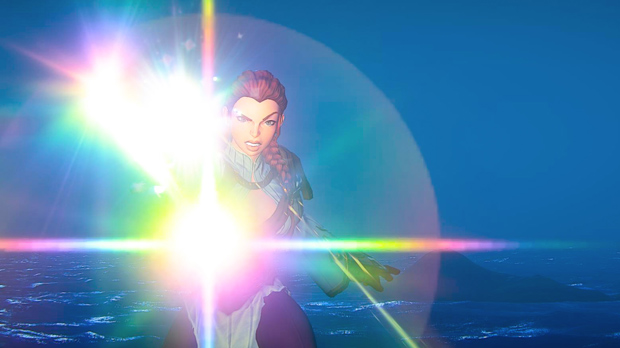 It doesn’t stand alone, though, because the gearing process does involve the rest of the game. Adding a great deal of complexity to the experience is the fact that all weapons and armor can be customized with elements and effects, with an emphasis on synergies between them, to allow for uniquely tailored playstyles. And that’s “elements” in the broad sense. Poison is an element. Shadow is an element. They have interesting effects.

This blooms into a nearly limitless range of possibilities when you consider the fact that the new cave system, now deep underground, is best tackled by teams. The options for intriguing team strategy are high, the odds of “faceless Stormtrooper clones” are low. To further encourage this co-op approach to spelunking, loot is easily obtained and completely individualized. Anyone who contributes to a fight is eligible. Terry Michaels said it best in the stream, I think:

“We want seeing other people to be a positive experience.”

It’s a laudable goal, appreciable even by diehard hermits like me. I may not want to spend all my time with you, but it’s good to know that when I’m elbow-deep in monster guts, biting off way more than I can chew, seeing another player deep in the underground will be cause for relief, not worry. 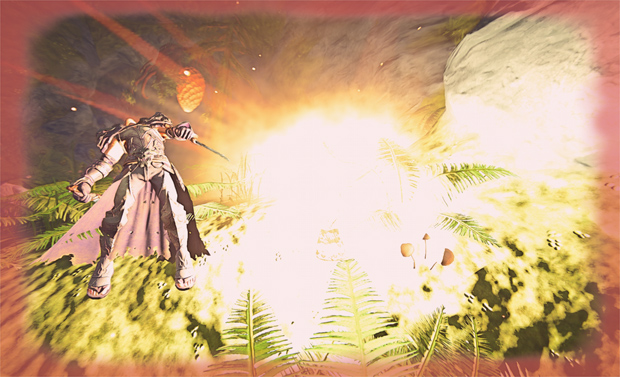 This sense of community is clearly a centerpiece of the team’s vision for the game, and it shows nowhere more than in the housing design. The amount of new systems implemented to dazzle, awe, and otherwise blow your friends’ minds. Remote switches and proximity triggers would be impressive in any game, but the dizzying number of conditions they can be used with and set to catapults them into the realm of the truly staggering. Want a strobing light show? No problem, that’s easy. How about a functioning trap door that drops into a pit of fire? No problem. Want it triggered by a lamp on the wall? Can do. The list of possible inventions goes on for quite some time, up to and including player-devised perpetual motion machines. 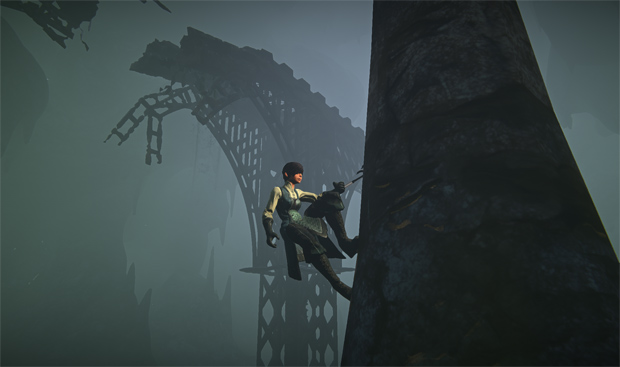 Landmark remains a work in progress, but it’s an intriguing work in progress. The year ahead should be very interesting as the game implements its plan for economy and achievement systems.