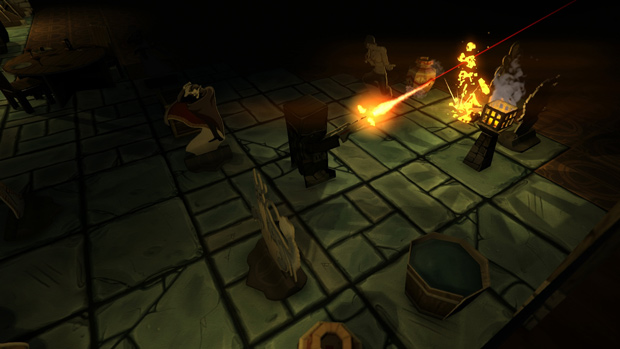 Triple B Titles Kickstarter project, Popup Dungeon, took a mere 11 days to Greenlight. This is in stark contrast to their previous game, Ring Runner, which took 399 days. Triple B believes the cause of this radical difference is the style and genre of the game as well as their now established fanbase, since Ring Runner was the first game their studio created. Popup Dungeon is a completely flexible Rogue style game with functionality to create any spell, ability, weapon, or character – limited only by your art and imagination.

Long ago or yet to be, a Wizard from another world stabbed his tower into the side of the Earth like an immense dagger. It pierced into stone and time, deeper than anyone can ever dig. The only way in is through portals scattered around the world. These portals are disguised as enchanted board games, and they come with an invitation:

“Come, morsels. Your bodies do not interest me; it is human imagination which I invite into my domain. Only the greatest of you will reach the high spire of my lair, now buried deep in the roiling rock. And I will be waiting, fork in hand, to devour the banquet of your creativity with a side of wits.”

Popup Dungeon is a single player or co-op multiplayer Roguelike game with infinite flexibility on creating, sharing, and building anything you’d like. You’ll never know what will be encountered in each dungeon as you delve into the depths of the Wizard’s tower, or how you can mix your skills and abilities to survive each new challenge as the doors open before you. Find out more at the Kickstarter Page at http://kck.st/1ovuVD9.