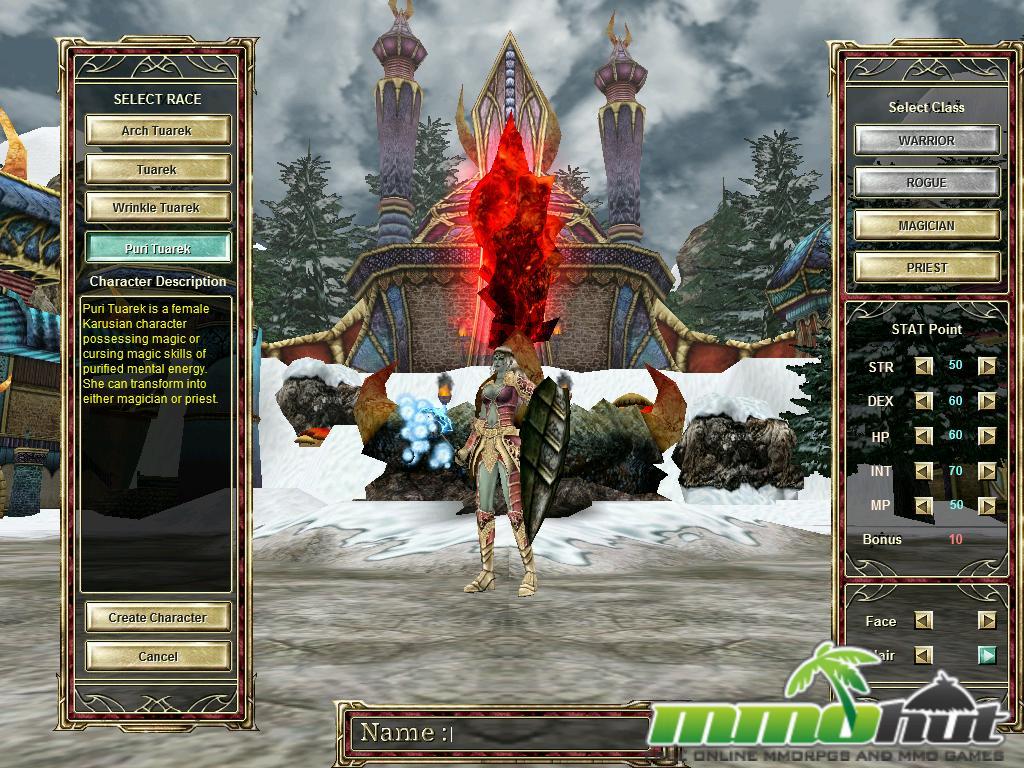 First released in Korea back in 2004, Knight Online has gained an international popularity. Now played by over 4 million users across the globe, Knight Online shows that good gameplay and a well made PvP system can trump flashy graphics and hyped gimmicks. But there is a complication to the game’s success; most users, even on the official North American servers are foreigners which makes communication difficult. Knight Online seems to be one of those games that veterans continue to enjoy but new players have a difficult time penetrating.

While creating my character, which involved choosing between the two available nations and among the few races and classes, I was surprised to find my usual character name taken. Altay is a common Turkish name but it’s usually always available in MMORPG games. I quickly used a different one, Aludar, and completed my character creation process. Being a relatively old game, I wasn’t expecting much in the way of appearance choices. There are around 3-4 different face and hair styles to chose from for each of the races. New players are given 10 stat points to distribute among the game’s 5 stats; Str, Dex, Hp, Int, and Mp. Luckily, the game informs players which stats are important for each class. For example, when you select the rogue, only Dex and Hp are highlighted which means they are the primary stats for that class. 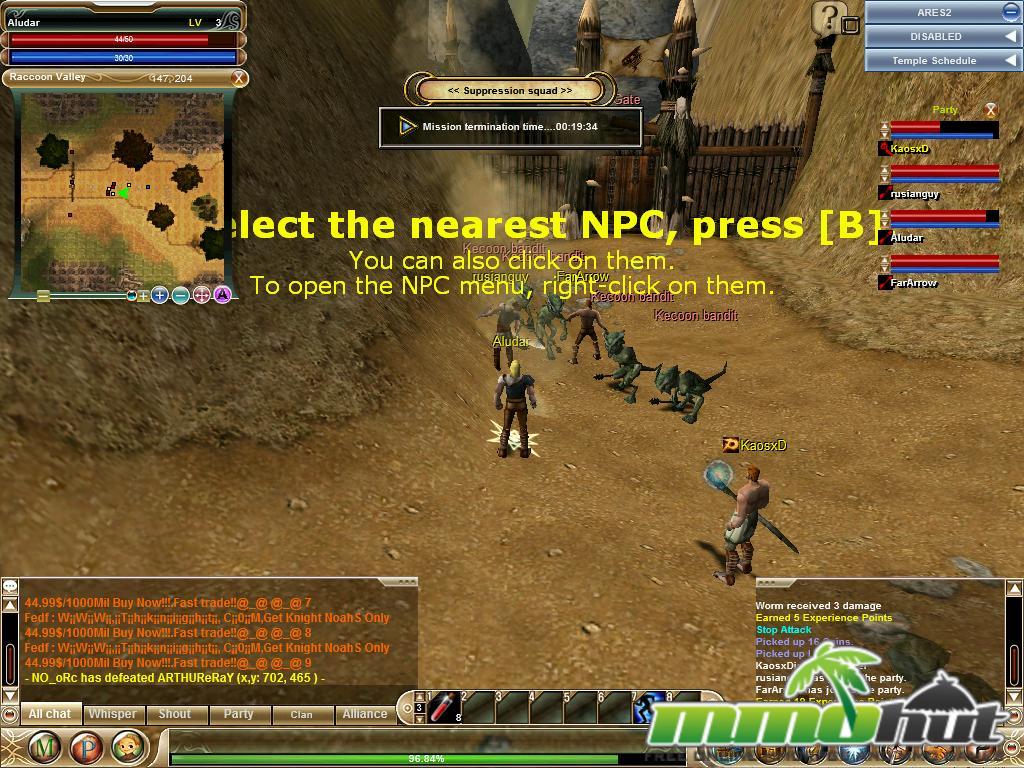 All players start their adventure in the neutral city of Moradon but Knight Online has no formal tutorial. Instead, an odd screen will appear with a little boy whining about being eaten by a worm. Head outside town (hit ‘N’ to open minimap), kill a worm and you’ll have freed the young boy who will serve as your quest/help manager for the rest of the game. He’ll pop up whenever there’s a new quest available, when you’re running low on HP, and when you level up. The experience rate in Knight Online is about average and players will be able to make their first job change at level 10, their second at level 60. The game has an interface that should be familiar to anyone who’s played a MMORPG before; movement is done via the keyboard or by point and click through the mouse. Double click to target a foe, drag skills and potions to the toolbar for easy access and so forth. Even low level monsters drop magic equipment and other useful items which is a huge plus in my book. The equipment system is well done, items have random attributes such as +3 strength on a ring or +2 dex on a leather belt.

Questing isn’t one of Knight Online’s strong points. Most quests are standard kill or item collection quests but besides quests done alone, there are instanced missions that can be activated. Those in the surrounding area can chose to join your mission and when enough players accept, you are all teleported to the instance. Here, it’s best to party up and work together to defeat the boss at the end. Experience and item drops seem to be higher in these missions and I found myself leveling up much faster while participating in instances. Another interesting feature in Knight Online is a small button labeled Town on the bottom of the screen that, when pressed, will teleport you back to the nearest town. There doesn’t seem to be any cool down or costs involved with its use, so use it as much as you please. Unlike many other games, the towns of Knight Online are bristling with activity. There are player run shops all over the place and plenty of spam in the chat boxes.

Knight Online has a huge community, there are 15 servers, each with 2 or more channels. The trouble is, many of the players you’ll encounter are Turkish. I’m not sure how or why Turkish gamers decided to flock to Knight Online but a large majority of all players on the Gamers First run servers are Turks. This explains why my usual online name ‘Altay’ was taken. The developers and publishers don’t seem to know what to do with this odd demographic change — the game is localized in English but with poor grammar. Some of the in-game text is still in Korean and after you log in, you’ll be greeted with Turkish game updates. All this isn’t that big a deal but it sure struck me as odd. If you don’t mind playing alone or communicating on instinct, none of this should be a problem but late game PvP coordination may be difficult if you’re not willing to pick up a few words of this middle eastern language. Here’s a few words to help you get started: Merhaba means ‘hello’, Nasilsin is ‘how are you’ and iyi is ‘good.’ 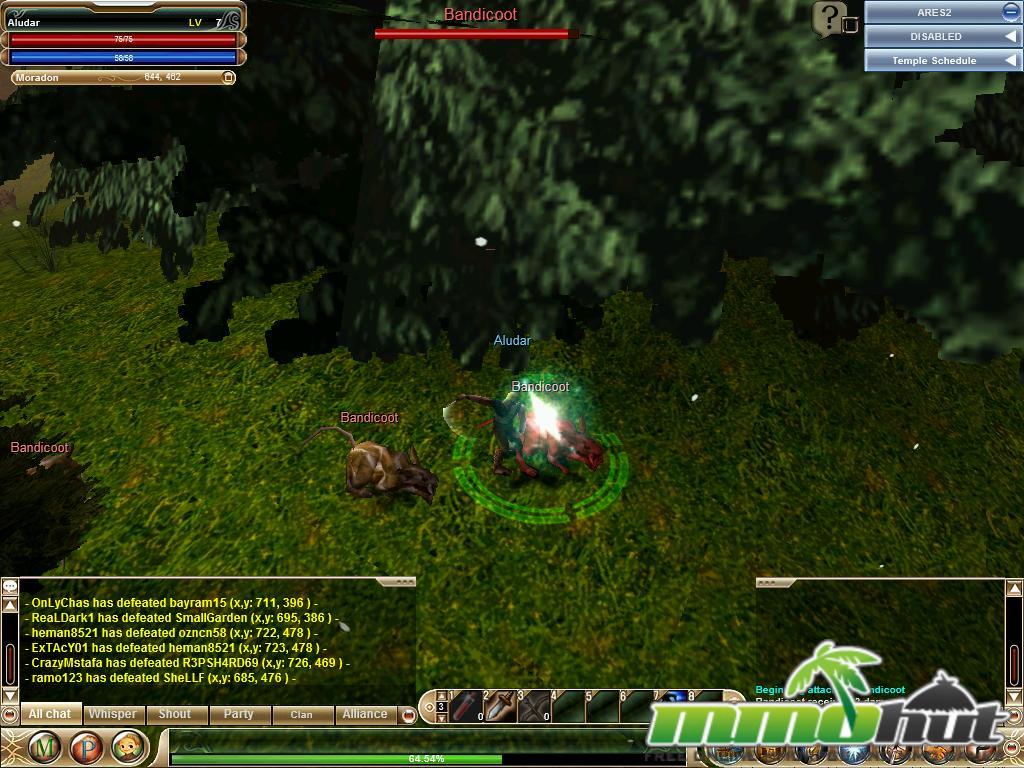 As I mentioned in the Overview, it’s the PvP elements of Knight Online that have kept this aging game popular across the world. There are special arenas where players may battle one another for sport, a special dungeon with open PvP, and several zones where the two factions battle it out for ‘national points’ which can earn players special ranks and cash bonuses. Special PvP events are also hosted on occasion where a limited numbers can participate. Combat itself is simple enough but with enough people, things can get complicated. Healing items such as potions don’t seem to have cool downs so be prepared to carry a ton with you to chug at all times. Besides PvP, Knight Online has an item upgrade system that’s pretty standard among Korean MMORPGs. Items can be upgraded up to a maximum of +10 which the chance of failure increasing at each stage. Players can also craft special weapons and armor sets with material collected throughout the game world and during special events.

Knight Online’s continued success is nothing to shrug off but it isn’t easy for a beginner to ‘get into’ a game like this. The large foreign population, aging graphics, and lack of a formal tutorial are all stumbling blocks for new players. But for those who put in the effort, Knight Online can be a rewarding experience.