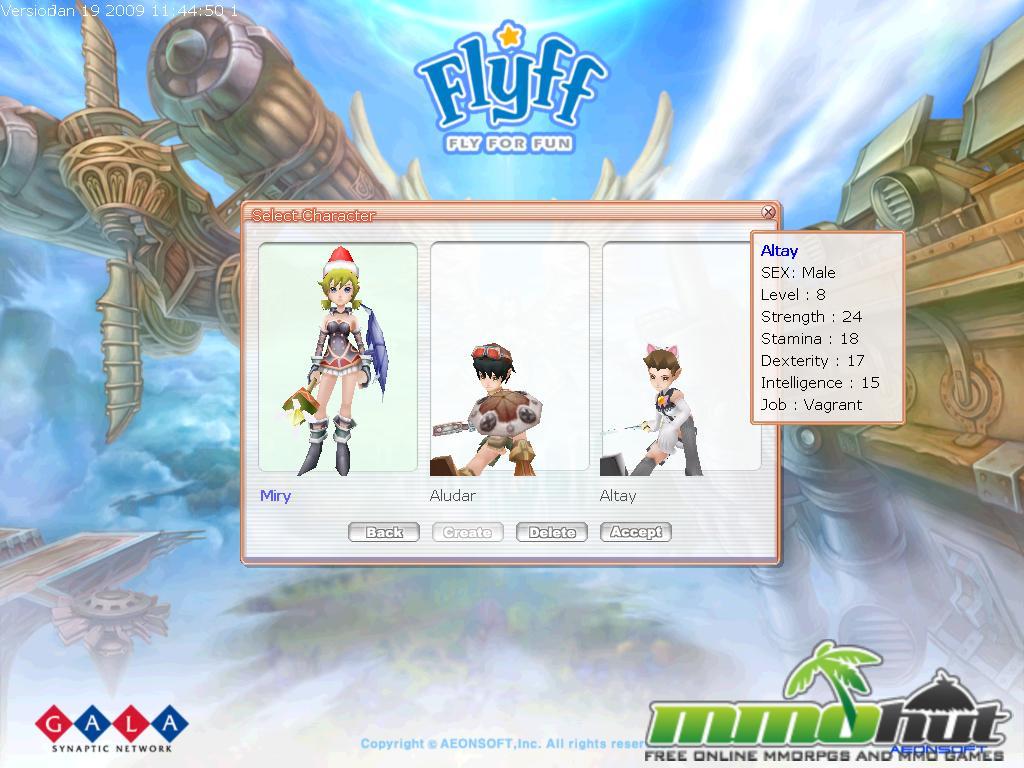 Fly For Fun (Flyff for short) is one of the first free to play MMORPGs I’ve ever played, and years later it continues to be a very popular game that’s still supported with frequent content updates called ‘versions’. Flyff is now on Version 12 and has eight active servers, including one PvP-oriented server. The game portal ‘Webzen’ publishes Flyff in the North American region, along with other MMORPGs such as Rappelz, Corum Online, Tales Runner, Shot Online, and Upshift StrikeRacer.
Starting Out

The visuals in Flyff are animated and have a lighthearted feel. The monsters are not particularly menacing – you’ll be fighting cute mushrooms and other innocent creatures during the early levels, moving onto the only slightly more sinister creatures as you progress. Flyff allows players to create up to three characters on each of the eight servers, which is more than enough considering the limited class choices – four initial classes and eight second classes. The character selection and creation screens are similar to the ones found in Ragnarok Online, another popular MMORPG. Customization options are very limited, players can select from a few hair styles and colors, along with their gender. Class selection is done later, after reaching level 15. Until then, all players take on the roll of the beginner class called ‘Vagrant’. 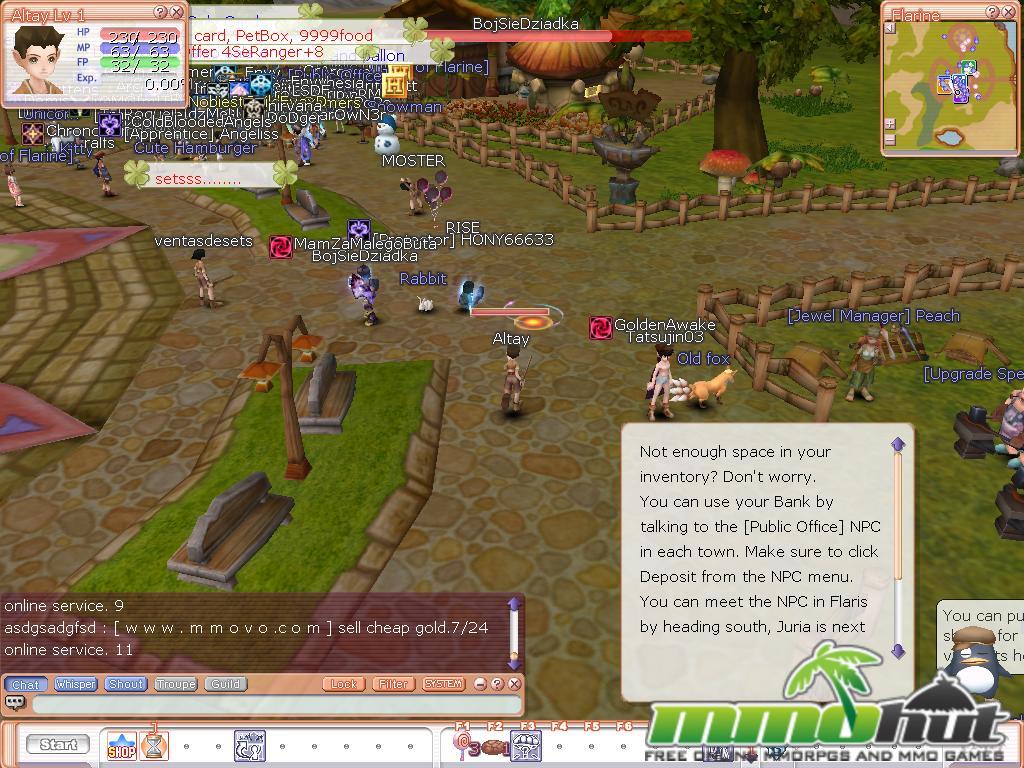 Flyff doesn’t have an official tutorial. Instead, instructions appear on the screen which explain the game’s basic controls and keyboard shortcuts. Movement is done through either the keyboard (W,A,S,D), or the mouse, point-and-click style. Hitting the space bar causes characters to jump exceptionally high, which I can only speculate is due to the game world’s lower gravity. Questing is available in Flyff, but it takes a backseat to outright grinding. Taking after World of Warcraft’s example, most games today try to make quests a key part of the progression system, but Flyff shows its age by having a very simple quest system that was mostly added recently. The only quest really worth mentioning is the initial class change quests, which all players must complete upon reaching level fifteen. The quest varies by which of the four classes you pick, but all of them are an annoyance.

Combat is handled by double-clicking on your target to auto-attack, and assigning spells and other skills to the toolbar. The grind goes pretty fast (at least during the early levels), but as mentioned earlier, it’s mostly a grind with few quests involved. One thing worth noting about combat in Flyff is how reliant it is on health and mana restoring items. Their cooldowns are only a few seconds long, and it becomes necessary to spam them during the mid and high levels. Luckily, they are rather cheap and can be stocked up on. My Magician carries ten stacks of 100 of both healing items; bread for hp and water for mana. The amount healed per item depends on its quality/level and the player’s CON stat. The higher your con, the more each item will heal you. These healing items can be obtained from defeated monsters, but it’s better to purchase them in bulk from NPC vendors. This will undoubtedly be your largest expense, but it’s well worth it to keep the game’s pacing bearable. Defeated monsters also have a chance of dropping magic items – rare set pieces (colored green), and special dice that can be used to upgrade equipment. Low-level players should simply turn around and sell these rare drops to fund their healing item budgets. This should go without saying, but be sure to sell the rare items to other players after learning their worth. Do not sell them to NPCs! 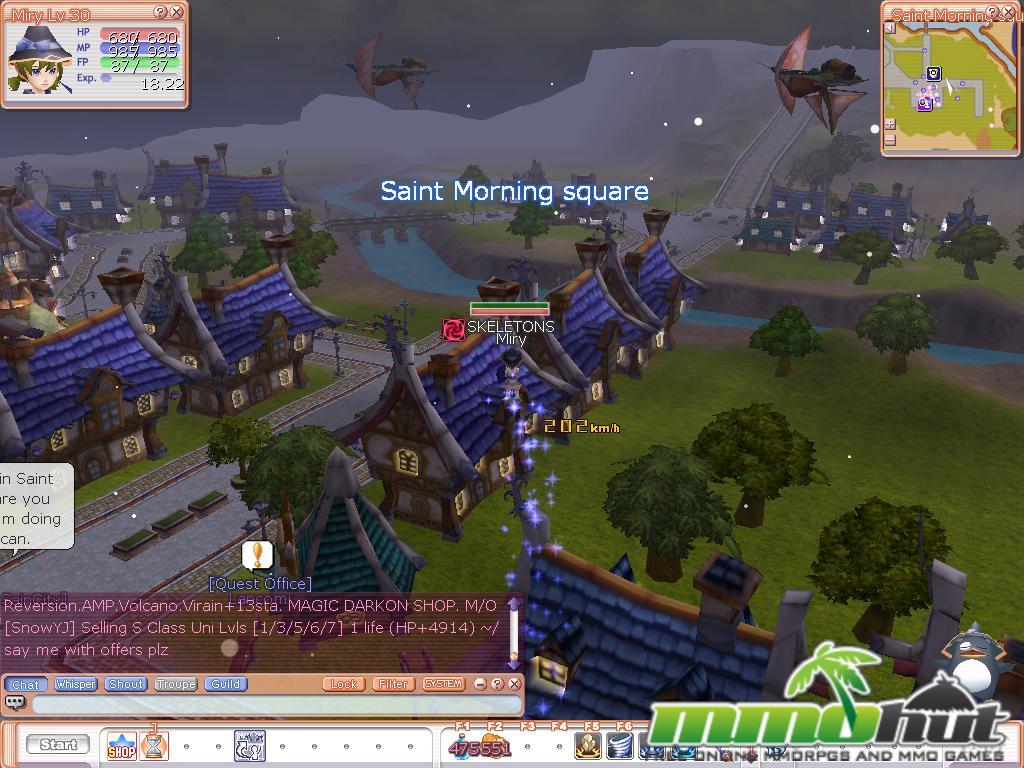 Its not until level twenty that players will learn where the name ‘Fly for fun’ even comes from. After grinding it out to that level, players will be able to purchase their first flying mount (there are several models available, such as brooms, skateboards, etc). The flying feature is not as exciting as one would imagine, and really not very important to the gameplay. The only practical use for flight is getting around the island you’re currently on (there are three available in all). It is possible to fight monsters in the air, but this is very impractical and there really is no reward for doing so. Flying does give players access to special locations that they could otherwise not access (such as floating islands), but most of these serve no function. One thing I did enjoy was flying as high as possible into the sky, then dismounting and watching my character plunge back to the ground. Luckily, there is no falling damage in Flyff, so no worries there. Besides having a PvP-oriented server with open PvP, players can challenge eachother to duels, or fight it out in a special free-for-all arena. Guilds can also declare war against each other and have large scale ‘guild duels.’ Those interested in playing Flyff for a long time should start looking for a guild right away, since a powerful guild is required to get the most out of the game’s end game content. Guild related features include the standard guild bank, but also a special guild donation system where all members can see how much each player has contributed to the guild budget.

Even after several years, Flyff still stands out as both an easily accessible and enjoyable MMORPG experience. The game’s large community and all the content that has been added over time make up for the game’s old age.