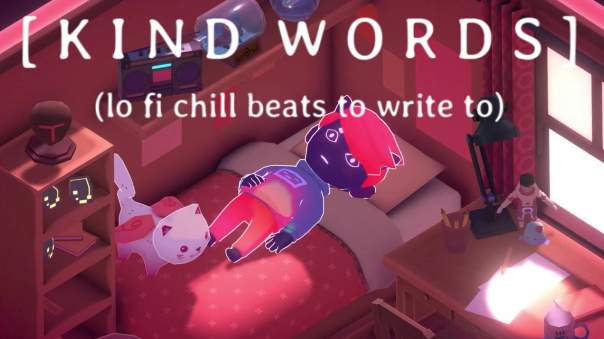 The internet, in particular social media, has become synonymous with trolling, anger, and toxicity. I personally try to avoid using Reddit in any form, but I will concede it’s gotten much better over the years. Unfortunately that’s simply because the toxic element has been pushed out to other places, like 4chan. From 4chan they went to 8chan. Now, with 8chan having gone dark subsequent to the El Paso shooting, the alleged perpetrator of which having posted a manifesto on the alt-right extremist site, that element of toxicity has been scattered across the internet like dandelion seeds, waiting to find purchase in new, rich, fertile soil.

Meanwhile, in a small, dark, quiet corner of the internet, a delicate rose is budding. It is in this secret garden that caretakers spread nutrients into the soil and seek to cultivate this blossoming example of compassion and caring. I’m speaking of Kind Words (lo fi chill beats to write to) – which I’ll simply call Kind Words henceforth.

Kind Words is an amazing little piece of software that, quite simply, lets you share and receive kind words with other users under a veil of total anonymity. Users do choose a username and password, but when interacting with other users, only the first letter of that username is given. Users are encouraged and reminded not to share personal information. Popcannibal does retain some personal information from users but this is in case of alarming messages, such as threats of self harm; and only so that proper institutions may be informed if there is concern for someone’s safety. 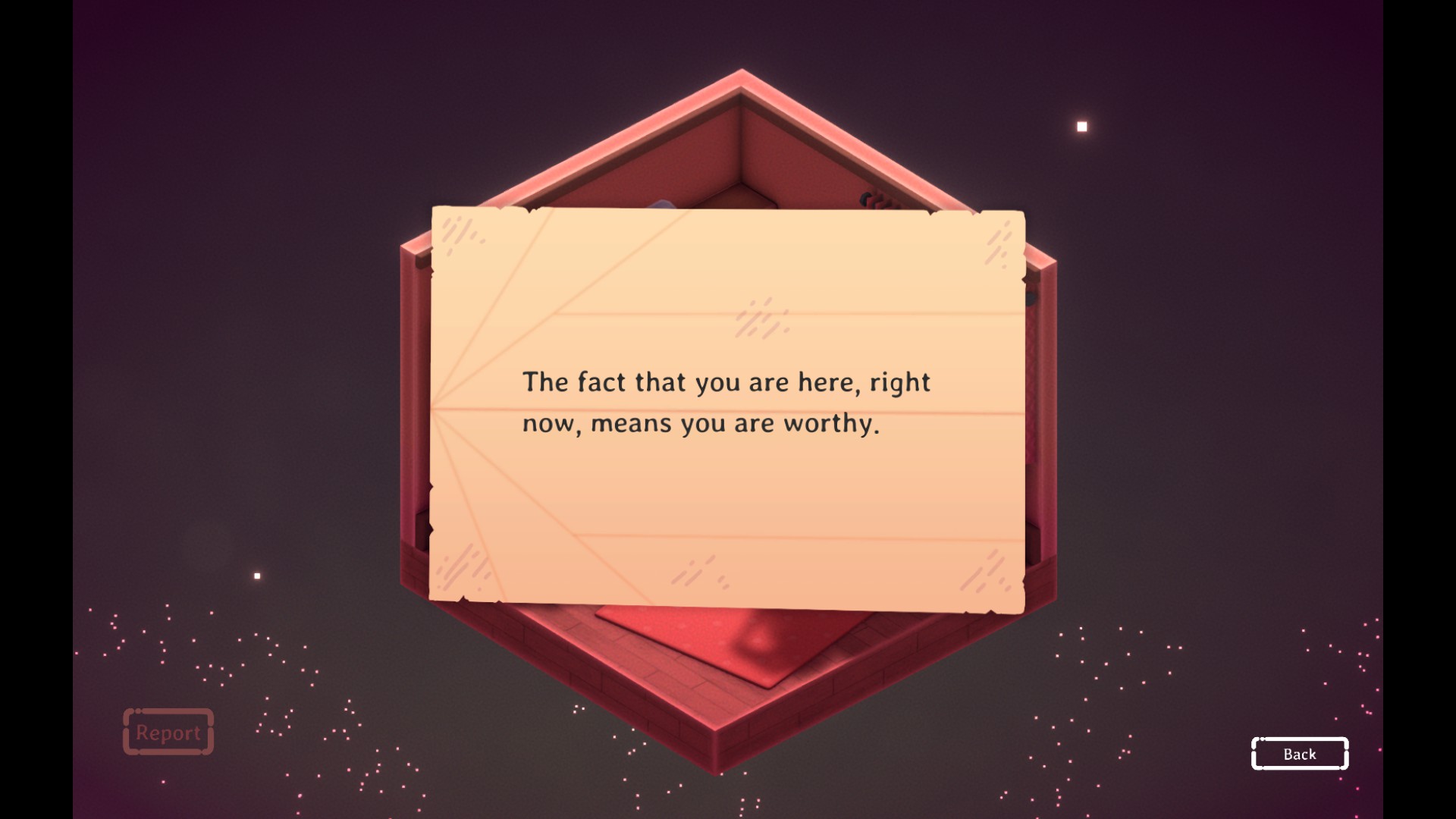 Unfold an airplane to catch a positive message from another user.

Users of Kind Words may share positivity in a couple of ways. The first is simply to write a short message with something kind or uplifting, to the effect of, “Hey, it’s okay to not be perfect. Doing your best is doing your best, and nobody can ask any more of you”. Other users will then see this message floating through their room in the form of an airplane, which they may click to read, or ignore as they see fit.

Secondly, users may send out or receive requests. Requests can be anything from advice to simply asking to be heard. There were multiple messages to which I responded just that: “You have been heard”. I myself filled out a request, the contents of which I’ll not share due to being of a personal nature. However, the responses I received were heartwarming, sincere, and thoughtful. In thanks, I was able to send stickers to the other users, but no reply. Kind Words isn’t meant to be a place to open a discourse.

You’ll begin the game with one sticker, and can collect the others on a sheet. You’ll receive them periodically as thanks for responding to requests. Once you’ve collected a given sticker, you may then use it to send out a thank you response of your own, as well as using it to decorate your room.

There’s no real customization. You can either have the decoration, if you have the sticker, or not. Still, it’s fun to collect them all.

Out of around fifteen responses I received, not a single one of them was snarky, rude, or unkind in any way. If there had been an unkind response, however, there is a button to report them. Browsing through Steam’s review section, it seems unlikely that this abuse report is used much. It is to the benefit of the game’s community that there is a small price point, $4.99 USD, which will be a deterrent to all but the most dedicated of trolls.

Kind Words doesn’t stop at responses in its offering for mental health assistance. It also lists a number of resources: Take This and CheckPoint (which are gamer focused mental health organizations) and the national Suicide Prevention Life Line. They even have a website for Go Gentle Australia. 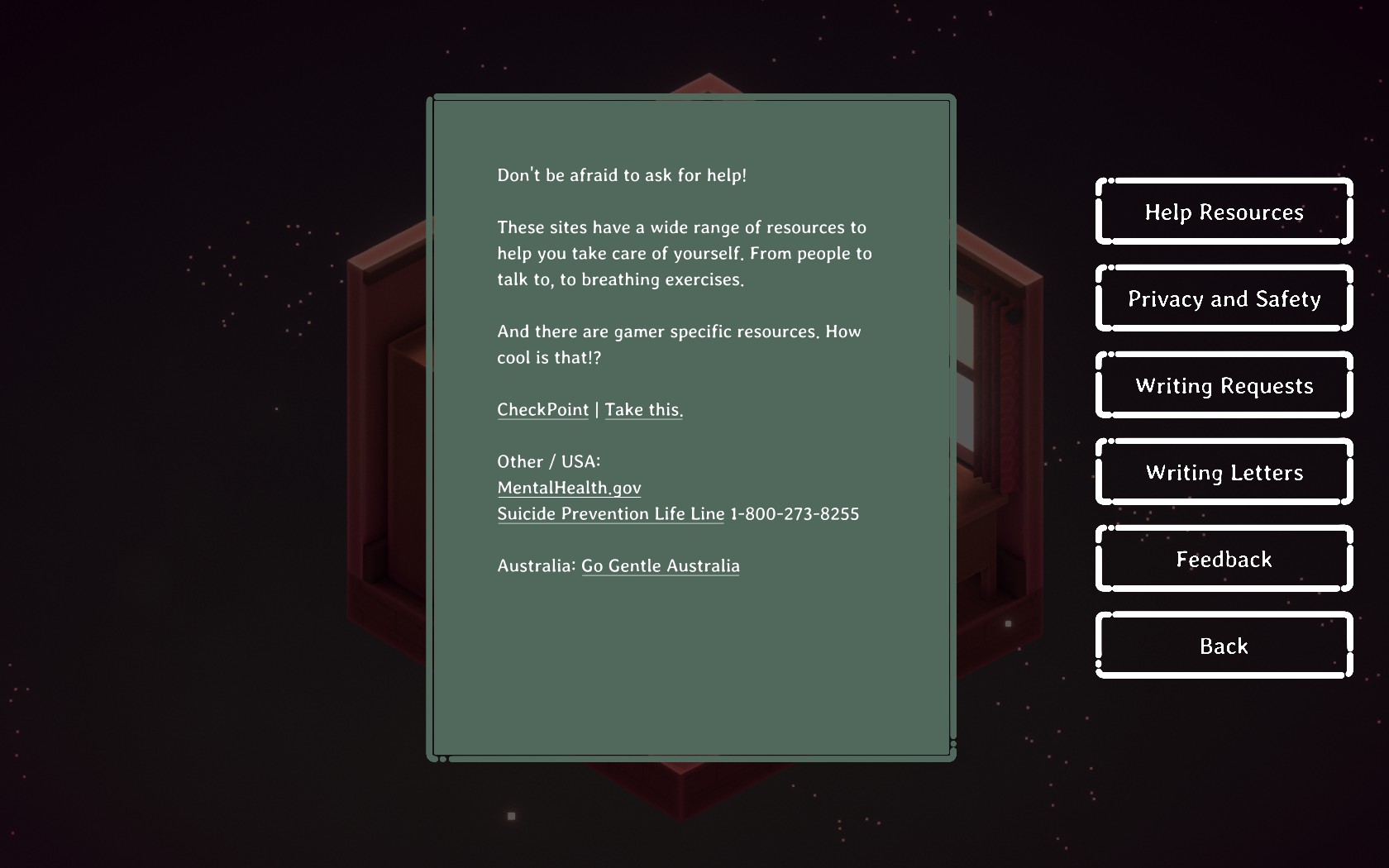 While you’re writing requests, responding to them, or sending out paper airplanes full of well wishing sentiments, you’ll be serenaded by the lo-fi stylings of one Clark Aboud (Twitter: @clarkaboud). Aboud has songs featured in a wide variety of games, and even has a track in the movie Spider-Man: Into the Spiderverse. You may also purchase the game’s original soundtrack via Steam. The Steam soundtrack lists ten total tracks, but I could only find five in the game, which I thought was a bit odd.

I had a splendid little experience with Kind Words, and this is a title that I’ll definitely keep around for those dreary days when I need a pick me up. It’s just as gratifying to send hope as it is to receive it, and perhaps cathartic knowing that others are dealing with troubles the same as you are. It is perhaps a little bit sad that this is a certainly needed resource in our modern world, but I think that Kind Words definitely fills that need. I give it 5 of 5 paper airplanes, and I hope that this bud blooms into a glorious rose.