Join the Struggle Between Order and Chaos in Battle for Gea 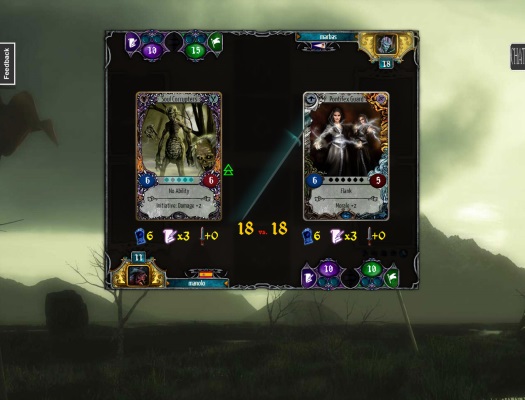 Mousee Games today announced the launch of Battle for Gea in North America and all English-speaking territories. One year after the fall of the Veil, the forces of heaven and hell wage war across Gea in a struggle for human souls. Designed by a dedicated team of trading card game fans, Battle for Gea ramps up the strategic depth by letting players manage attack and defense positions on the game board in addition to deck building.

“We’re proud to be partnering with Iron Belt to bring Battle for Gea to English-language gamers,” said Irina Kudosova, president of Mousee Games. “The game has been a finalist in several award categories, and the developers’ passion for the trading card genre really shows in the product. We love online trading card game and Battle for Gea has combined the classic mechanism of decks managing with a game board and strategic skills.”

What makes Battle for Gea different from many other online trading card games is the strategic skills needed by players; in fact, cards are placed on a board and both the positioning and the choice in attacking and defending order is crucial for success.

Featuring over 300 cards across nine armies in the starting collection, with new cards being added each month, Battle for Gea offers powerful flexibility in building an army and designing strategies to crush the opponent. Players may test themselves in the single player campaign and daily quests, or challenge other players from around the world in the war rooms. Regular events present numerous opportunities for players to reap rich rewards for their tactical genius.