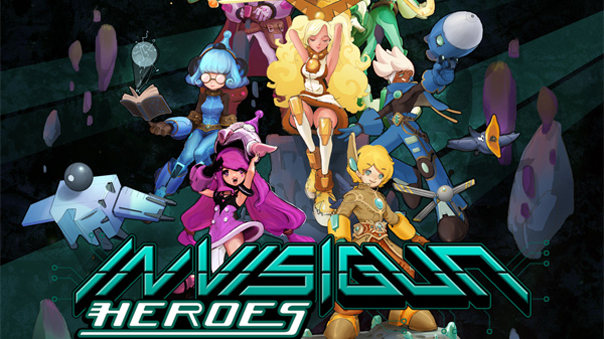 You know what’s popular these days? Party games. Oh, and battle arenas. Stealth games are on the rise too, especially after Metal Gear Solid V. So why not mash them together into a single-screen game and let the mayhem begin?

That’s the premise behind Invisigun Heroes, one of the games showcased at the PAX Rising booth where a select few indie games are showcased with direct developer face-time. I met with Shadi Muklashy to learn more about this creative title.

An advanced game of peek-a-boo.

Featuring 2-4 players with optional AI bots to fill in the gaps, Invisigun Heroes drops the players into a single-screen arena filled symmetrically with environmental obstacles. And, with only a second to see where your feet have landed, you’re gone, cloaked in invisibility – along with the rest of the players in the arena. You will have to pay attention to sounds, the grid-based map, and small tells in order to not only locate your enemies, but also to be aware of your own surroundings.

Players are uncovered in a few ways, some of which depend on the environment. If you bump into an object, it’ll turn the same color as your character, giving away your location. In a snowy map, footsteps will be left behind in the snow as you move. Sentries and special skills can also reveal players on the map. Of course, using a skill or taking a shot at your enemy will also expose you, so every moment and action you make has to count. Each character has its own special skill, and eight heroes are already planned.

While describing the game mechanics makes the game seem slow, in reality games play out very quickly as players scramble to kill each other before they’re spotted. In a few rounds I watched on the floor, usually the first few rounds would be indecisive, followed by a clear victor emerging as they adapted to the gameplay and their environment. This is only enhanced by the game’s audio (not very distinct on a busy PAX show floor), but which is carefully crafted to give away each step.

Currently the game features 5 planets with ten maps each, giving players a full variety of 50 maps to play on. Some environmental objects are destructible while others remain more permanently. Shadi revealed that he has a lot of additional ideas for the game’s map systems, including special tiles like ice that slide the player, The big goal however is to be expected: a map editor that will allow players to create and submit their own playable maps to the community.

Invisigun Heroes also has several game modes already built in, from the direct “last man standing” of Survival to kill-count based Hunter. The Carrier mode offers an interesting twist, as the player to carry the relic the longest wins, but is visible while carrying and can’t fire. Currently all modes are versus with no team-based play, although Shadi remains open to the possibility if it can be created and balanced properly. In fact, we shot ideas back and forth for a while, and it’s clear that the developer has an upbeat and open attitude toward developing the game to be fun and fair.

Currently Invisigun Heroes is on Kickstarter, and the project runs until February 20. I’ve got to add here that I’m impressed by the Kickstarter campaign. It has a modest base goal ($32,000), an impressively rewarding tier system – starting with the ability to add a custom taunt into the game just for backing the game at any amount over one dollar. Already about halfway through its funding goal, Invisigun Heroes looks like promising fun for both couch and online competitive play, and I wouldn’t be surprised if we see it being a popular YouTube and Twitch game after its launch.