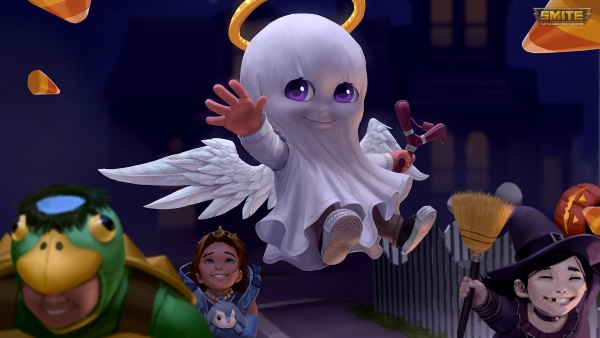 Editor’s Note: Trying to form these columns around regular themes, so they make a bit more sense. This one will likely cover SMITE Patch Notes/SPL/PPL/HOTG as I have the time to catch them and general thoughts regarding the product.

Today, I’m going to cover SMITE Patch 4.19 in the HiRez Roundup , but I do have some thoughts on the PPL too, let’s get started! I’d like to make this a weekly column, but I could definitely do one for other companies I follow, like Riot/etc. 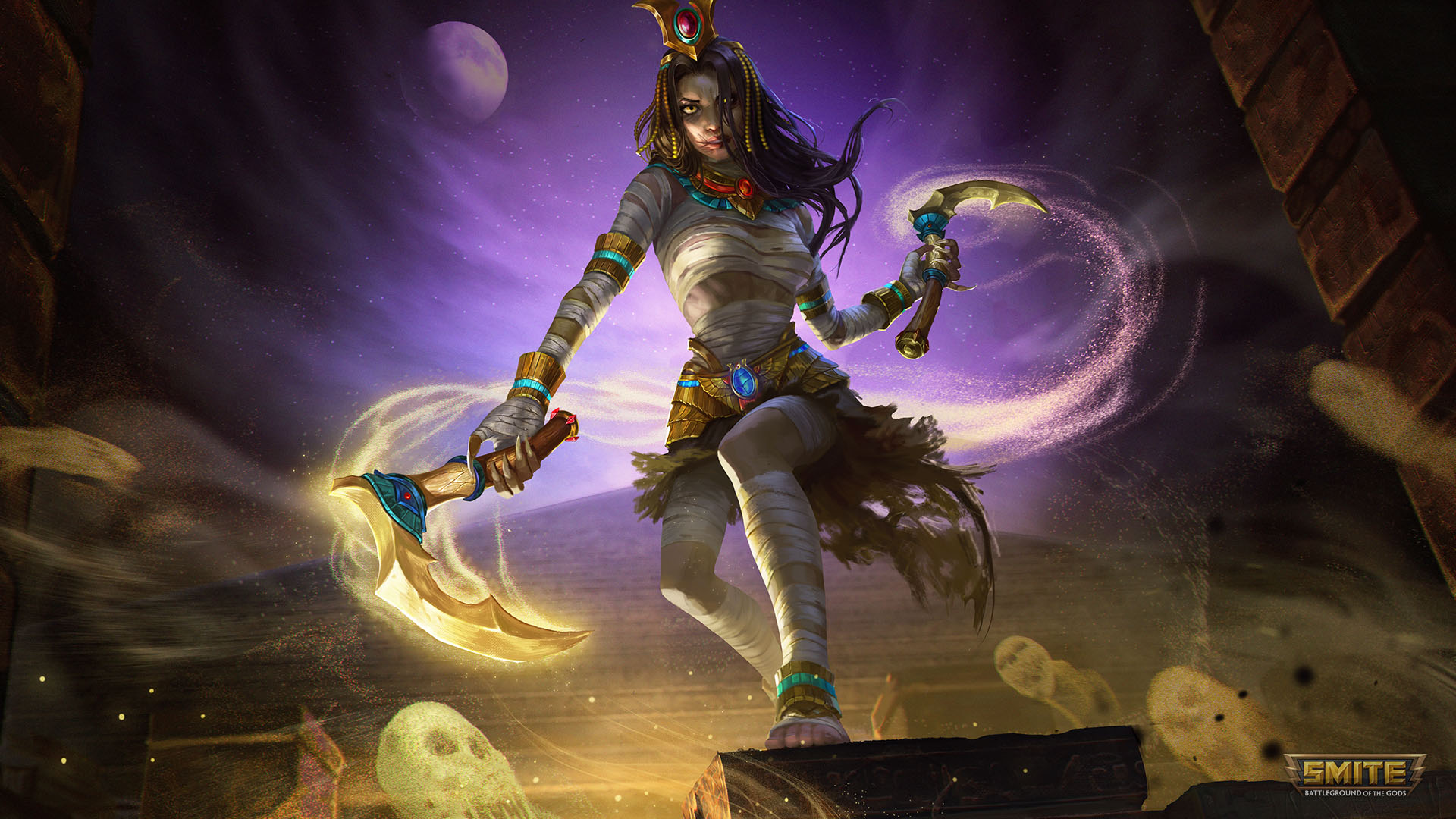 Are mummies supposed to be sexy? I'm confused.

As far as SMITE goes, this one probably won’t be as long as the others. 4.19 is not a gigantic patch, in my opinion, but it does have some very interesting stuff going on! The majority of the cool stuff this update is cosmetic, from the Odyssey and Halloween stuff returning/making its debut and some “minor” God balancing. Several Gods changed, but only one is truly earth-shattering. The biggest thing is probably Ao Kuang. I’ve heard some howling and baying over it, and I’m still trying to parse if I think it will move Ao Kuang out of that “pick-or-ban tier” that he seems to be in around Silver/Gold. One ability was changed as it paired with a particular item, and it just made Ao Kuang an unstoppable dunk machine. The cosmetics are gorgeous though! I’m a bit disappointed because word on the street was that Discordia was coming to the game in 4.19, but maybe that will be for the big “4.20” update. The Odyssey skins are Halloween themed, because of course, it’s October. Mummified Izanami (Exclusive, Odyssey) is gorgeous for being, you know, undead, Yurei Susano (Exclusive, Odyssey) is very thematic and Warchief Raijin (Exclusive, Odyssey) reminds me strangely of that guy I spent close to three years fighting in World of Warcraft. I still love it though. Cupid gets another damn skin with Trick or Treat Cupid (Exclusive) which makes me a little sad … I hate Cupid though, so take it with a grain of salt. And he has so many skins! Grim Reaper Thanatos (Exclusive)  is godlike though if you’ll pardon the expression. If I can’t get Archon, this is the closest I’ll probably get. Hachiman gets a pretty set of Mastery Skins and the Legendary one is especially nice, as far as I’m concerned. I am a little disappointed Hachiman didn’t get a skin that is reminiscent of Bishamon from Vampire Saviour. This is the perfect time for it! 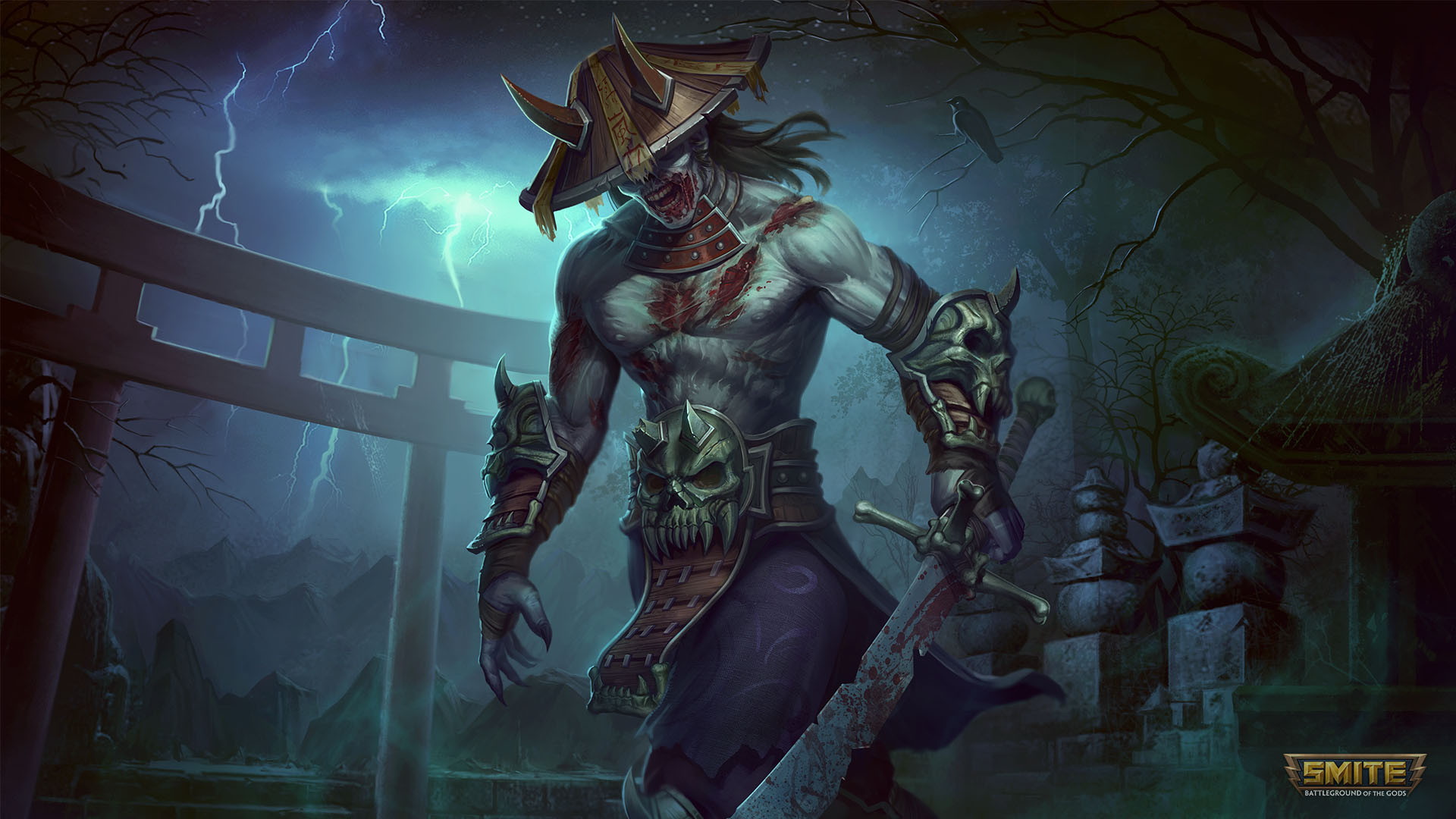 RIP In Pepperonis, Ao Kuang Mains! Their tears are delicious to me. What made Ao Kuang so damn powerful? Polynomicon, when Wild Storm procced from it. Sure, he’s gaining a buff to Dragon Call (15/20/25/30/35 to 20/25/30/35/40.) and the Damage to Wild Storm (80/125/170/215/260 to 90/135/180/225/270) but the only thing Ao Kuang mains are going to talk about is how unfair the nerf to Wild Storm is. No more proccing basic attack items/effects! That just means when he engages it’s not going to be a basic guaranteed kill. I think it will balance him nicely. Will Ao Kuang still get banned? Oh, I have no doubt of that. But people will probably fear him a little less now.  Awilix is less of an Early-Game Monster now and focused definitely more towards the later part of the game. Team comps that aren’t geared for the late game will probably not want her around. She’s not getting nerfed into the floor or anything, but now Awilix mains will have to carefully consider what they put their points into. It’s not all bad news though. Moonlight Charge gains 10% of Physical Power Scaling (up to 70%), and Feather Step only loses damage on early ranks. The cap is still 180 (60/90/120/150/180 to 40/75/110/145/180) and the changes to the middle ranks are menial at best. It will slow her down early, but not cause her to be worthless. 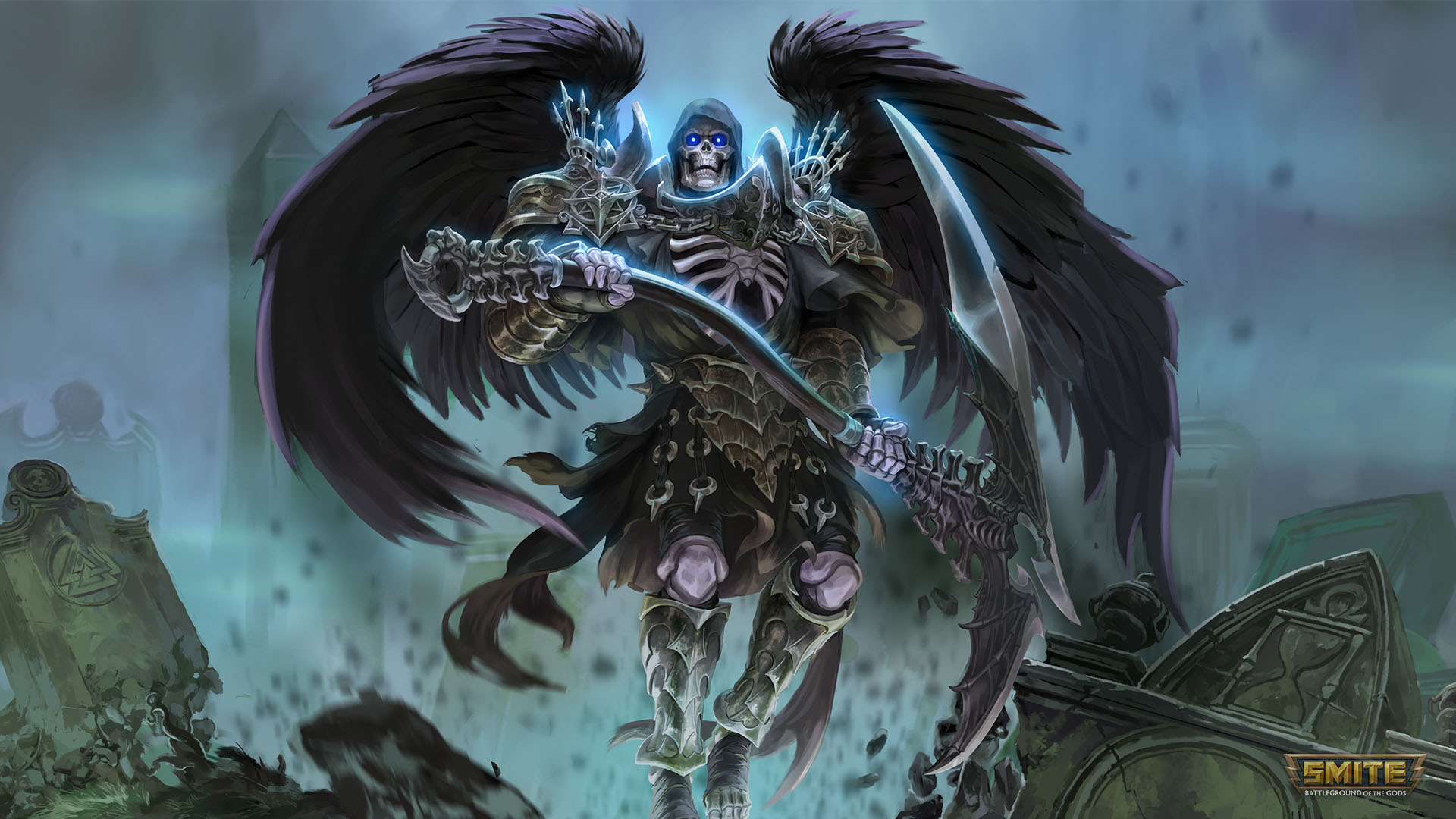 Best Skin of the Update, IMO.

Izanami is being shifted about a little bit, with Fade Away‘s casting time before the leap going down to 0.35 seconds (from 0.65), making it a lot easier to utilize.  The timer for Dark Portal changed as well, Reduced warm-up time from 0.85s to 0.6s as well as a reduced post-fire time from 0.85s to 0.6s. These moves, in my opinion, were far too easy to avoid, prepare for and while Izanami had great damage, it was simply too easy to see what she’s plotting and be prepared for it. All around I think it will allow for her to react after using abilities easier too (on Dark Portal). Oh, Raijin; now people want to respect the drums. With this, of course, comes some balance. Now that a lot more people are playing him, it’s easier to see where potential problems might lie. First up is Percussive Storm, which now has a radius of 6 units at all times (up from 4.5 at max). They don’t scale upwards anymore, so players will always have an idea of what they need to be aware of. It took a minor damage hit also (35/50/65/80/95 to 30/45/60/75/90). Frankly, I love this. Not knowing what kind of radius to expect is a trifle unfair, at least in my opinion. Raiju‘s projectile speed is down 20%,  and players can move during the warm-up for Thunder Crash. Being fastened in place was no good. Taiko Drums changed a tiny bit, adding additional support to limit the times a player can be stuck, unable to cast the Taiko Drum shots. This ought to make the ult far more useful. It’s not “stronger”, though. All told, I think these are good changes for Raiju. He probably has some of the best quality-of-life improvements, next to Izanami. 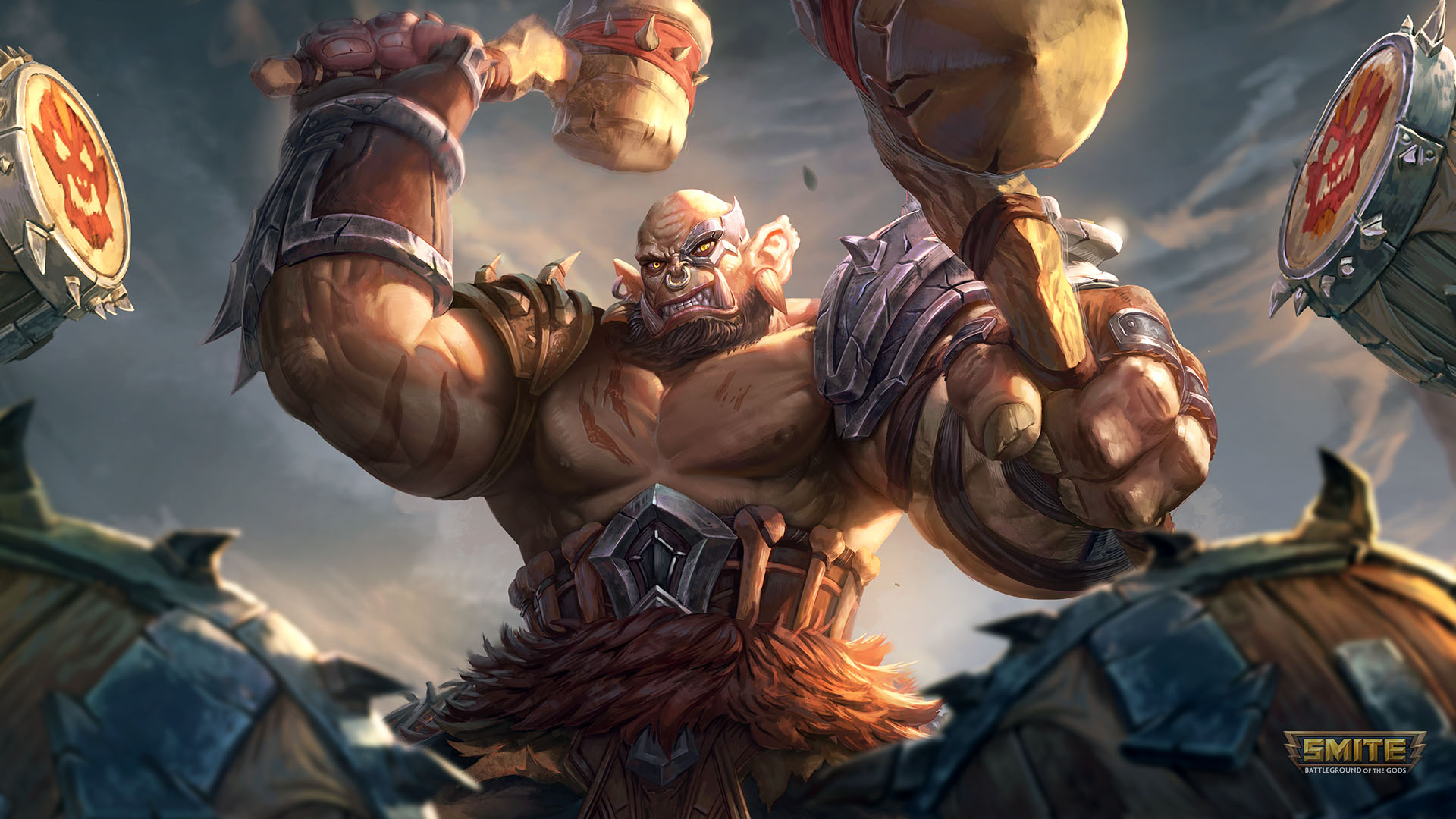 Oh, Hellscream. You failed as a Warchief, so it's time to take up drumming.

Cu Chulainn is the next to feel the wrath of the early-game-slowdown. Cu Chulainn is incredibly hard to stop in the early game and harder still to fight. This just makes his late game that much more powerful, since it was so hard to shut him down or even slow his climb in the early game. His Rage generation is slowing down, on Barbed Spear (Down to 5 from 6 on non-god targets, increased on god targets from 6-8) and Salmon’s Leap and Spear of Mortal Pain (Same figures). This is to make the early game a bit slower, and when teamfights happen, he’ll generate more rage and not feel like a total pushover. His Passive, Berserk is losing 20 off the top of the Base Shield (20 from 40) and the Shield Health-per-level also took a point off (23 from 24). Erlang Shen’s the next to feel the wrath, taking a hit all around on 72 Transformations (Mink): Decreased Mink Form Base Damage from 90/150/210/270/330 to 70/130/190/250/310 and Decrease Mink Attack Speed and Haste buff from 5s to 4s. It was so strong, had so much pressure and was a terrific early wave clear. This is also to allow other Gods to compete with him in the early game.  Finally, Hachiman needed some fine tuning! Eagle Eye will give more Ammo at early ranks (3/3/3/4/4 to 3/3/4/4/4) and the damage will go down slightly (10/15/20/20/25 and 0/5/10/10/15 to 10/15/15/20/25 and 0/5/5/10/15) to compensate. His movement speed went up 5 points (to 365) to allow for more mobility, Iajutsu now has 16s cooldown for all ranks. Mounted Archery‘s mid-rank damage took a bit of a hit, making it a bit more consistent (5 points down on Rank 2, down to 280).

There were some brief Item changes too: 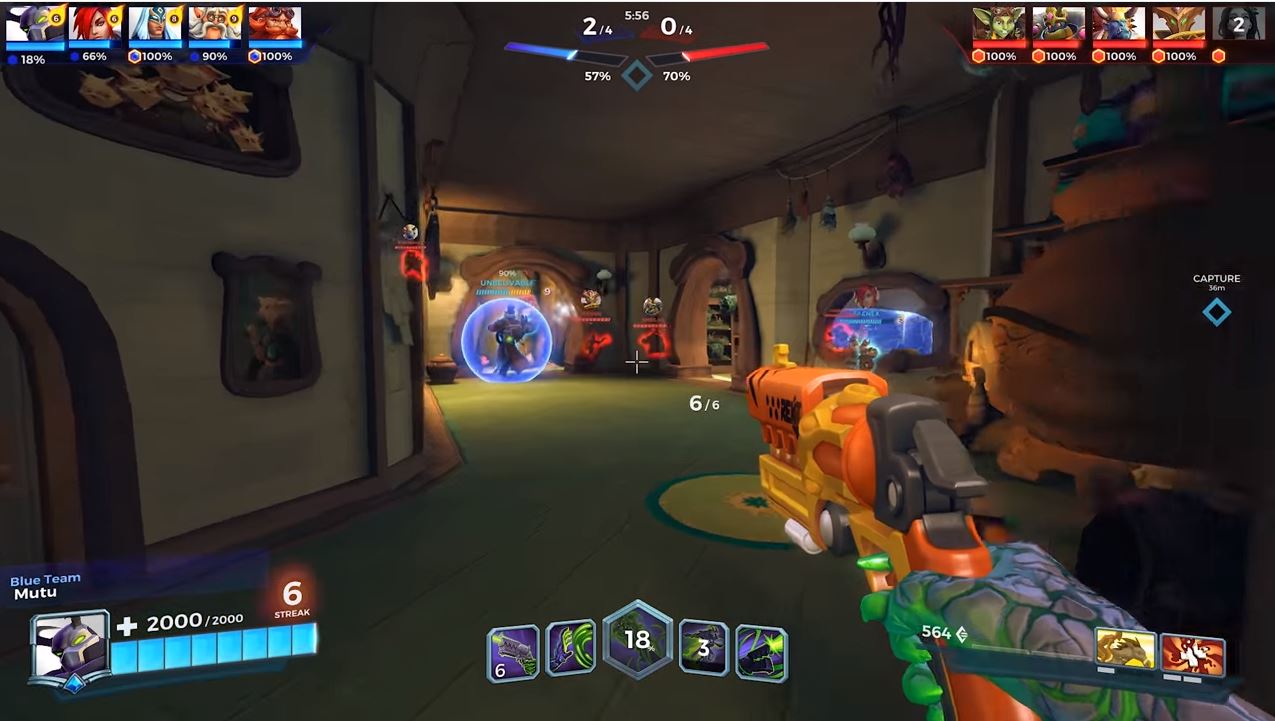 Player of the Week: MUTU!

As an aside, I cannot wait for the Tina Announcer Pack. I can’t see myself ever unequipping it. I also love that there is a new outlet to watch Paladins on Facebook. I love that it’s on 7 days a week, at 3 pm. But I do wish that Paladins content was not on at the same time as SMITE content! I can’t watch both at once! I mean I could if I muted one I suppose … but as someone who is deaf in one ear, I can’t listen to several things at once without feeling dizzy and uncomfortable. I can’t parse out the extra sounds. If we could balance that schedule just a little bit, that’d be terrific. I have to say some of those PPL matches for Week 1 were “Certified Slappers”. I have to put my match of the week stamp on “NaVi (2) vs. Virtus.pro (0)”. I’ve been a follower of NaVi since I started watching professional DOTA 2 matches and I was not terribly surprised at the strength of their Paladins team. That was a beatdown, pure and simple. MUTU’s Androxus does not mess around. I don’t think I’ve seen Andro play like that in a long time. Every shot was essentially perfect. There were tons of games that blew my mind over this week, but that match, in particular, stood out to me as being a televised mugging. If I had to pick a player of the week (and maybe I will!) I’d give it to him. Kudos, MUTU.