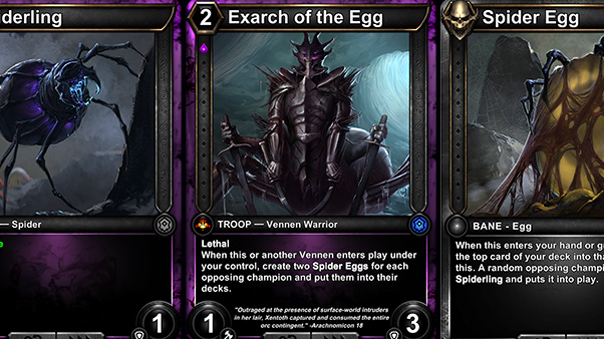 Many digital card games are simply the physical card games transformed into a digital format. You never really see the digital format being used to its full potential. The traditional digital card games are like simple PDF files for paper books. These simple PDF files can be improved upon and offer additional features found in eBook readers such as built in dictionaries and search which are not possible in paper books. Following the same idea, HEX aims to make full use of the digital format and present players with a card game that is simply not possible in the physical form. Read on for my first impressions of HEX, a card game that promised to tie in MMORPG elements since its Kickstarter, and is at long last beginning to deliver on some of these promises.

HEX: Shard of Fate can be classified as a TCG/MMORPG (trading card game/massively multiplayer online role playing game) that takes the traditional elements found in card games and adds in additional elements from MMO games. The game is developed by Cryptozoic and was backed by the highly successful Kickstarter campaign raising almost $2.3M with 18K backers. This success shows the potential of HEX while building a great community before the game has even been released.

To begin, HEX offers what you would expect from a card game: you can collect cards, build your deck, and use your unique deck to battle against AI or real players. If you are familiar with any TCGs, you should be able to pick up the basics of HEX with ease. In short, a generic game of HEX features players taking turns playing cards with the aim of depleting the enemy champion’s (player) health points. If you are completely new to TCGs, the in-game tutorial does a great job at explaining the basics of the game. It goes into great detail to explain the user interface, the playfield, cards, and some basic strategy. I found the tutorial to be very well done but the developers have ensured me that they are still working on improving it even more. Although the game is complex, new players should have no problems getting into the game with basic enough of understanding to complete matches, even if veteran players trounce them in ways they might not fully understand.

Every champion plays around a unique deck.

Every champion plays around a unique deck.

While I was playing through the game’s tutorial, I was really impressed by the board design and user interface. It is very easy to understand what is going on and everything feels natural. There are some things that could use some work such as additional notifications if you are unable to do an action or tips to guide players in the correct direction. For example, I kept dragging my cards where I wanted to play them, but they would just fly back into my hand; you have to place them in the middle for them to be played. Additionally, while the board looks nice, it doesn’t feel alive. Aside from the occasional effects, the board looks flat and dead. Additional effects or 3D graphics should make the board (table you play the game on) feel more natural, real, and alive. Hearthstone and Infinity Wars both do a great job in this regard by providing interactivity across the board, either through reactive locations you can click, or fully animated cards.

When you pull yourself back and realize the game is still in the middle of beta though, what is present impresses. The graphics and animations for playing cards, or making cards attack show serious style. I am hoping to see additional effects for attacks after the beta. It is unreasonable to expect unique attacks for each card, but it would be nice to see different effects for different types of cards or spells. The animation for opening booster packs is also amazing. Cards spew out of the pack to fly across the screen before slowly flipping to reveal your loot. Cryptozoic has produced enough physical TCGs to recognize the addictive experience of opening physical booster packs, and is clearly putting the effort in to recreate that feeling of excitement in the digital world. Moving on from animations, the designs for cards are well done. The team behind HEX is by no means tiny but it is still not very large, even with these limitations the artists have put in their full effort to design the cards. 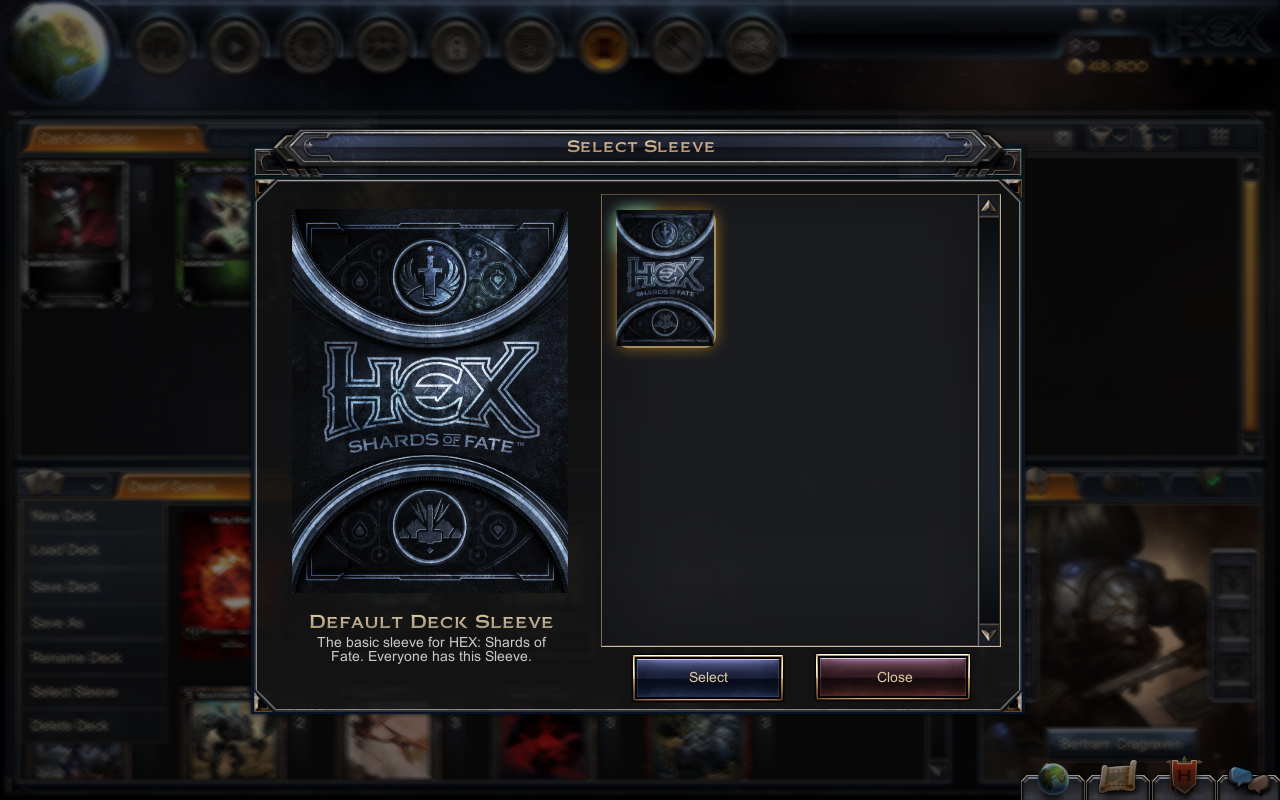 Custom sleeves can be used to make you stand out.

Overall, the gameplay combat is similar to other games where you place troops that can attack the enemy. However, in HEX troops are only able to attack the enemy player directly, meaning you’re helpless when it comes to removing your opponent’s troops from the field by ordinary means. This puts the power in the hands of the defender, allowing them to choose if they want their troops to block incoming attacks, or sacrifice their health bar to maintain their field presence. All cards have attack and defense stats which are used to determine the result of battles. This combat system makes the game move along faster with new tactics that shake up the formula for more experienced TCG players.

So far, everything we have seen is just like a normal TCG. You might be asking, where is the MMO portion of HEX? The game allows players to customize their decks and play style by creating unique cards and champions. The champions act as your avatar playing the cards; these champions all have unique abilities which can be used through the game. For example, my dwarf champion lets me summon machine robots that can only be used for defense. While this is a nice addition to the game, it is not enough to bring the TCG to the MMO level of customizability. Every TCG player wants to create their own unique cards, HEX somewhat fulfills this wish by allowing players to add equipment and sockets to cards. All sockets are available from the get go but only some cards are socketable. With these additional options, you can create truly unique decks. 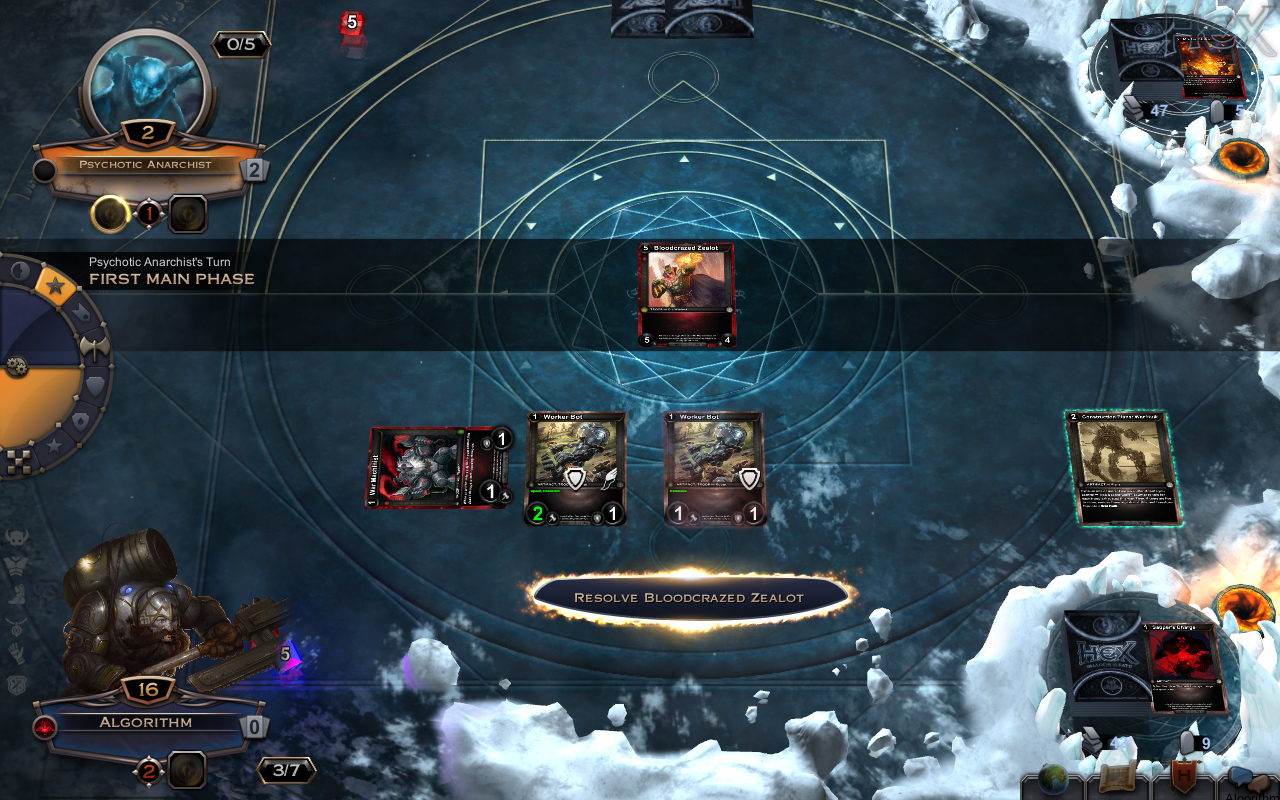 The interface and board design is really nice.

However, customizability isn’t the only option we see in MMO games. Like MMORPGs, HEX allows players to run through dungeons and raids, fighting off AI in order to gain loot. In the beta we only have the Frost Ring Arena, which is just a tiny piece of the envisioned PvE system. This arena allows you to defeat as many opponents as you can and awards you with prizes based on how far you get. The Frost Ring Arena is a great way to practice and obtain new cards.

You don’t just get cards by playing the game, you have to work to purchase booster packs from the in game store. Like all games, HEX needs to provide a return for the developers. Fortunately, the monetization model in HEX is very well done, the developers describe the game as “free to access.” You will need money later on if you want to progress in the game, but you can always play for free. There are two currencies in the game. The premium currency purchased with real money can be used to purchase booster packs for new cards. Additional cosmetic items such as custom art can also be purchased from the in game store. 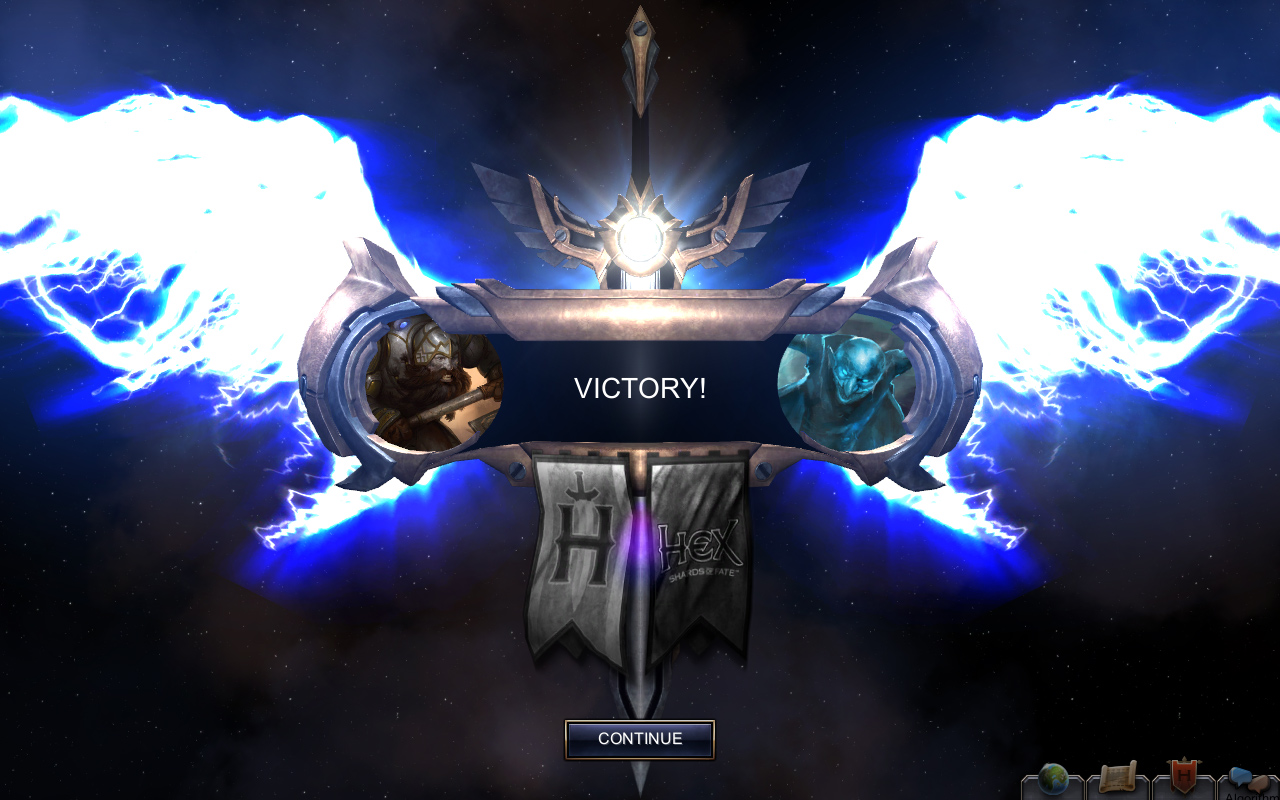 Every win in the Frost Ring Arena means better prizes.

In order to allow even free players to play the game and encourage trading, an auction house system is present in HEX. Players can sell anything on the auction house, except custom sleeves which must be earned, for either gold or platinum. This systems allows players to play how they want, either grinding out gold to trade with paying players, or rushing your deck progress by purchasing platinum. Trading is a major part of physical TCGs, so I was happy to see an auction house system in HEX. You are also able to use the mail system to send players cards or currencies directly as well.

My favourite part about the game is the tournament system. Every day there are tournaments going on which players can buy into. My favourite way to play TCGs is to have each player open booster packs and build new decks on the spot. With the tournament system, this method of play is possible! You need to buy in with money and booster packs, and the best players are awarded prizes. As mentioned above, the auction house system can be used to obtain the required items even for free players. If daily tournaments are not enough, larger tournaments, such as the upcoming $100K prize pool tournament, are also in the works. The eSports scene looks bright for HEX, but its all speculation until we see the first major successes from a major sponsored tournament. 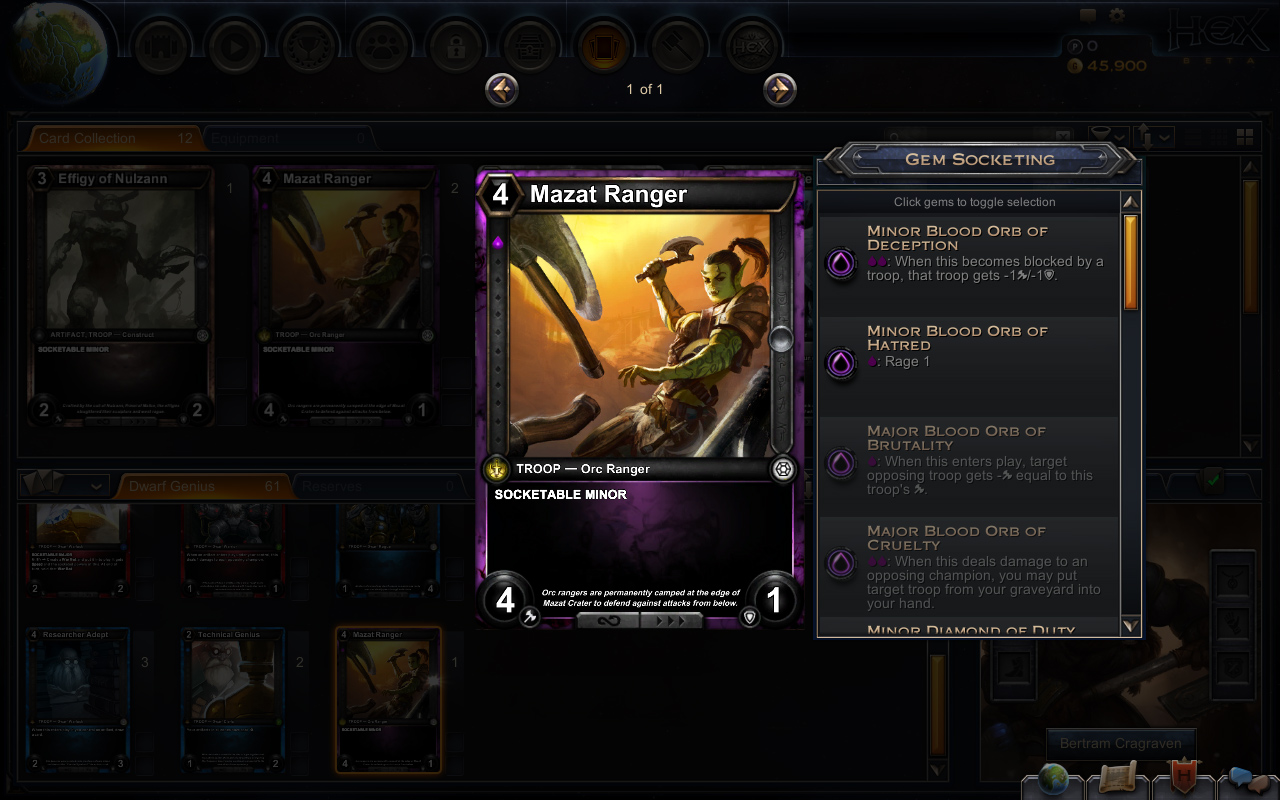 There are many gems available for socketing.

Conclusion: Great (for a beta state) 4/5

In conclusion, HEX is a great TCG/MMO. I had a lot of fun testing out the game during its beta stages and can see how the various parts are slowly merging to create a comprehensive quality title. The successful Kickstarter campaign proves that there is interest in the gaming community for a competitive TCG that goes beyond the realm of physical card games. With a little more polish, HEX can easily become on of the best digital TCGs.

With the game allowing anyone to play without a beta invite, I highly recommend checking HEX out as well as following it regularly.

Graphics: 3/5
The art style, graphics and animations in HEX are well done. However, more unique animations could bring this game to the next level. You have to keep in mind that its still in beta, but sooner or later HEX needs to address the similarity of attacks, and dead feeling of the board. Simple additions such as unique attack animations for spells and adding interactions on the board can make a big difference.

Control: 4/5
The controls are great, you don’t need anything other than a mouse for a TCG. After the beta, I hope to see more on screen tips guiding new players with actions to ensure they do not get confused. I had to spend a bit of time placing cards on the board as if you do not place it in the centre, it would pop back to your hand.

Features: 5/5
There is so much more I could talk about for HEX, but that might have to wait for the full review. There is a lot you can do in HEX, it has a lot features with many more on the way. You can easily get lost in everything HEX has to offer. On the flip side the game may overwhelm those unfamiliar with the TCG genre.

Customization: 5/5
As you would expect from a card game, the customization is great. You can create unique decks, select champions, create unique cards, and even change the look of your cards.

Community: 5/5
The community has been proven to be great from the successful Kickstarter campaign. You cannot raise 2.3M dollars from 18K people with a bad community. Even in the beta, the forums are very active and experienced players are always offering help to newbies.