Heroes of the Storm: Zul’Jin Hero in Review 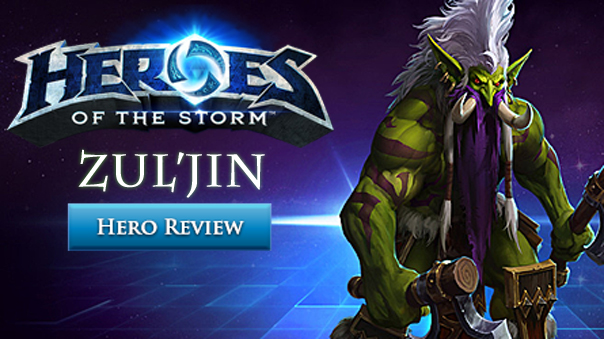 With school and volunteering taking up so much time, it has been too long since I could sit back and enjoy a game. After making it out of finals alive, I was looking forward to getting back into some gaming. Unfortunately, this wish had to wait due to additional event planning and volunteering during the breaks. Finally, after months of waiting, I could get back and play a game I truly enjoyed, Heroes of the Storm. As a bonus, I was able to play an entirely new hero. The introduction of Zul’Jin, the Warlord of the Amani, was a great way for me to get back into HoTS after my raid that was UofT finals. Read on to learn more about the latest addition to the Heroes of the Storm roster.

Zul’Jin is a ranged assassin from the Warcraft universe. He is a warlord of the Amani forest trolls and has been chieftain of the Amani tribe since before the Second War. He is an aggressive hero who is rewarded for living life on the edge. As Zul’Jin nears death, he becomes more and more dangerous. After playing some games with Zul’Jin, I can’t help but think of Huskar from Dota 2. He plays quite similarly and only those players who are not afraid of taking risks will make the most of this hero.

Zul’Jin’s passive ability, Berserker, provides bonus attack speed for every 1% of health that is missing. It can also be activated to deal bonus damage at the cost of 2% health per attack. His entire arsenal and playstyle revolves around this ability – live life on the edge to live life to its fullest. Don’t be afraid to have low health and forget the habit of always topping off your health pool. Unlike most heroes, healing up whenever possible is not always the best choice. If you are getting too low, Regeneration, his E ability, may be channeled to regenerate 25% of his maximum health while out of combat.

Couple Berseker with Grievous Throw (Q) and Twin Cleave (W) and you end up with a pretty scary hero. Grievous Throw throws an axe forward dealing damage and marking the first 2 enemies hit. Marked enemies take 50% bonus damage until the mark expires. This ability allows Zul’Jin to deal some very serious damage – enemies bearing your mark will melt before your eyes. Being able to deal high damage is pointless if your enemies are always getting away. This is where Twin Cleave comes in. Zul’Jin throws 2 axes in a large, circular arc, dealing damage and slowing affected enemies. Being able to chain Grievous Throw and Twin Cleave together is what separates the good Zul’Jin players from the bad.

Berseker increase your DPS as your health pool drains

When it comes to heroic abilities, you have the choice between Taz’dingo! And Guillotine. Taz’dingo!, aside from having an awesome name, allows Zul’Jin’s health pool to never go below 1 HP for the next 4 seconds. This ability allows you to focus on just dishing out damage without worrying about death. At such low HP, Zul’Jin’s damage skyrockets, and he can often finish off the enemies before Taz’dingo! expires. Be sure to wait until the last second to cast Taz’dingo! in order to make the most of it. Additionally, while it may be tempting to run away as Taz’dingo! is about to expire, in most scenarios it is better to stick around and finish off the enemies. When you are running away, enemy heroes will only have to hit you a couple of times to finish you off. This puts you in a horrible position and more often than not, you have a better chance of surviving by attempting to kill enemy heroes before Taz’dingo! expires. Plus, with the level 20 talent, Amani Resilience, Taz’dingo! will restore health upon expiration. Nice!

While I am personally not a fan of Guillotine, you do have the option of throwing a massive axe into the air which crashes down on enemies, dealing damage based on how much HP you are missing. This is a nice ability but I still prefer the risk rewarding ability that is Taz’dingo!.

When playing Zul’Jin, do not be afraid to fight to the death. Often, as Berserker begins to kick in, enemy heroes will regret sticking around as your health pool continues to fall. This makes Zul’Jin a great 1v1 hero – there are few heroes who can stand face to face against Zul’Jin in an auto attack battle. Crowd control abilities such as stuns and silences is where Zul’Jin begins to fade. Smart enemies will stun Zul’Jin as his health pool fades, allowing them to finish him off without fearing Berseker. Silence can also cause you to not have Taz’dingo! available when it is needed the most.

Conclusion: A Hero Keeping You On the Edge of your Seat

Zul’Jin is a very fun hero to play. While most of his damage will be done through simple auto attacks, the idea of being rewarded for maintaining a low health pool will keep you on the edge of your seat. You can never sit back and relax as you farm creep waves and fight enemies. You must keep an eye on your health pool and weigh the pros and cons of healing. Regeneration is always available when you need it but the question is, should I regenerate health or can I get by with what I have? This simple question is what makes Zul’Jin so enjoyable. At every point of the game you must weigh the pros and cons and determine if your health pool should go up or down.

Once again, great job with the latest hero to join the HoTS roster, Blizzard! In a game where action is never far, a hero that gets rewarded for living life on the edge is bound to be interesting. I can’t wait to try out what else Blizzard has in store. I am still amazed at the quality of these hero releases on a crazy one month release cycle.