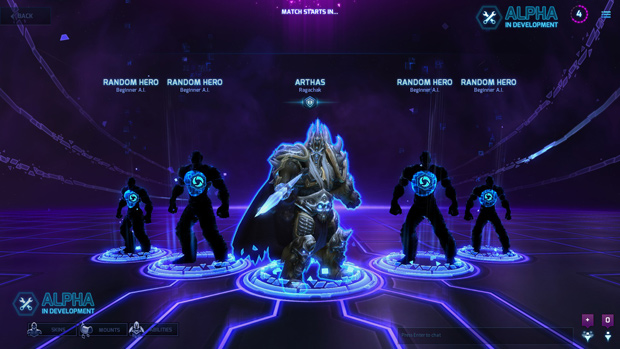 Stay A While, And Listen

Heroes of the Storm is Blizzard’s answer to the variety of MOBAs in the works or already out. Dawngate, DOTA2, League of Legends, and Infinite Crisis – these are all examples of games in the niche field of the MOBA, which stands for Multiplayer Online Battle Arena. In this type of game, your goal is to defeat the other team’s base, and complete a variety of objectives to assist your team. However, each MOBA tries to do something a little different to stand out from the growing crowd. SMITE uses a different perspective and requires skillshots to do virtually anything. Infinite Crisis uses the DC Comics Universe, and a variety of maps that can be battled upon. 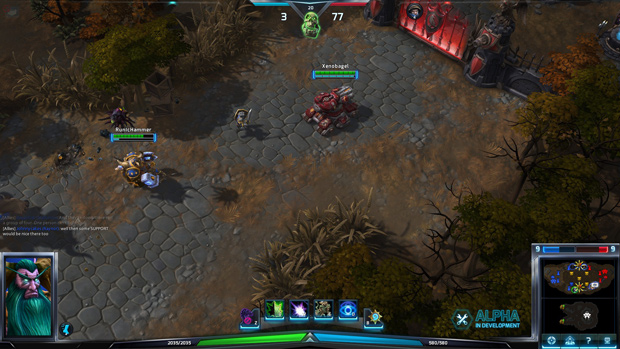 Heroes of the Storm also uses different maps, unlike League of Legends, which has one primary map and a few other sub maps. Heroes of the Storm seeks to make its mark in two crucial ways. The first is in its array of differing maps. The second would be the addition of bonus objectives such as the Mercenary camps; stronger minions inhabit these, but defeating them adds a temporary boost of attack power to your side of the field. However, caution should be exercised: after defeating the mercenary camp, you have to capture the actual camp, and an opponent can kill you and take credit for all of your hard work. Another unique element of Heroes of the Storm is the cast of famous characters from the Diablo, Starcraft, and Warcraft franchises. It’s definitely a plus for a Blizzard fan. And turns out there’s quite a few of them out there. 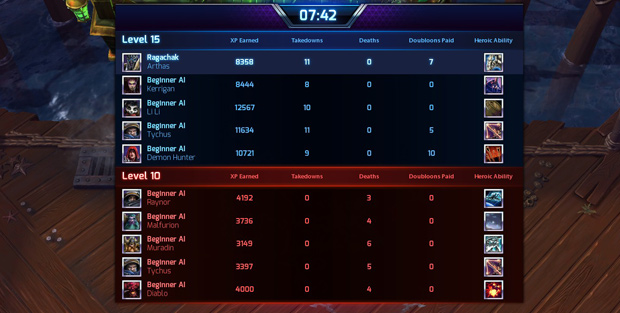 This is No Time to Construct Additional Pylons

In Heroes of the Storm, Blizzard worlds collide via a Nexus, and their powerful heroes and villains come to unite and battle to prove their might. You pick a character from this varied roster and join a team, with the ultimate goal of defeating your opponents’ altar hidden at the end of their fortress. To get there, you must fight through towers and walls, past waves of enemy minions, and against the team’s own champions. As of this writing there are four maps, and it is imperative to know them in and out, including their mercenary camps and bonus objectives. These objectives are crucial, and ignoring them means your team is almost certain to lose. Each map also has its own set of lanes. Traditionally there are three lanes and a jungle in a MOBA map; these change significantly in Heroes. The loading screen offers the important parts of the map, as shown below. The maps however are as follows: 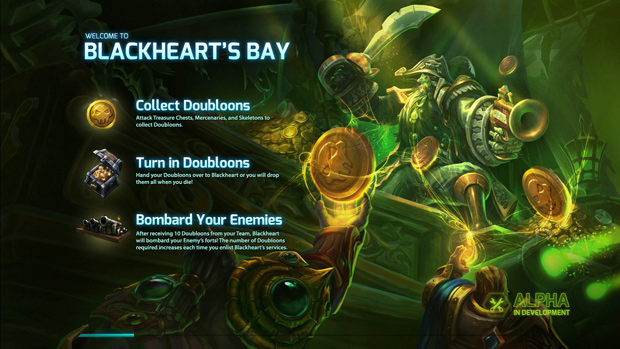 Blackheart’s Bay: Blackheart the Pirate’s ship sits in the middle of a series of planks and boardwalks, and your goal is to pay off the Blackheart pirates to bombard your enemies’ fortifications. Each time you succeed in paying them, the price goes up; greedy pirates . . . Defeating mercenaries and breaking gold chests gives you the coins, and if you can kill a player holding them (indicated near their health bar), you can steal theirs!

Cursed Hollow: My second favorite map. The Raven Lord of this forest demands tribute, which periodically spawn during the match. You must try to acquire these, and if your team gains three, the Raven Lord will curse the other faction: minions will have 1 health, towers and walls have lowered health, and the towers will not shoot you for the duration of the curse. This is the time to attack! Press the advantage with the blessing of the Raven Lord!

Dragon Shire: This is easily my favorite map. There is a lot to be said for taking control of the Dragon Knight and punting an enemy hero across the map, away from the teamfight. There are two shrines located at the north and south of the map, the Shrines of the Sun and Moon. Controlling both when they activate will allow your team to grab the Dragon Knight and use him until his health drops to zero. A great deal of coordination is needed, as the enemy will undoubtedly try to snatch a shrine so you cannot gain the edge you need.

Haunted Mines: The Haunted Mines is the first multilayered map that exists in the game; I have a feeling more will follow. Periodically, the Haunted Mines will open, and you and your enemies will rush down into them to kill undead and collect skulls. The skulls will form a golem, which will accost the enemy team; the more skulls you collect, the stronger the golem becomes. I had a bot match where somehow, the bots had 90 skulls to our 20. It was incredibly disheartening. This map requires more strategy and communication than the others, from what I have seen. 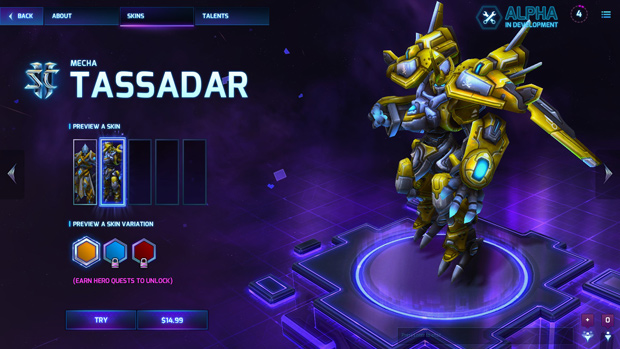 Even Frostmourne Has A Price

Heroes of the Storm is a free-to-play game, like most MOBAs. Blizzard is already raking in money off their other IPOs. Does that mean they won’t find a way to make money? Of course not. You can pay real money for champions, for skins, and for custom mounts for your characters. However, this is not the only way to acquire characters. There are, of course, a regular rotation of free to play characters, which always contains a variety of archetypes so you can play something you’d like. Winning player vs. player matches gives gold, which is the currency used in game. As you continue playing through the ranks, you’ll eventually unlock Daily Quests, much like Hearthstone, to earn bonus XP and Gold. It might be a little slower than one would like, but patience is a virtue! Or if you are like me and decide to buy anyway, take heart. Even if the champion you wish to purchase is not on the free-to-play list, you have the opportunity to take them into a test match and see if you enjoy the play style and abilities they bring to the table. This is something I have yet to see, and it is thrilling to be able to try the champion first, in the event you do not want to waste money. 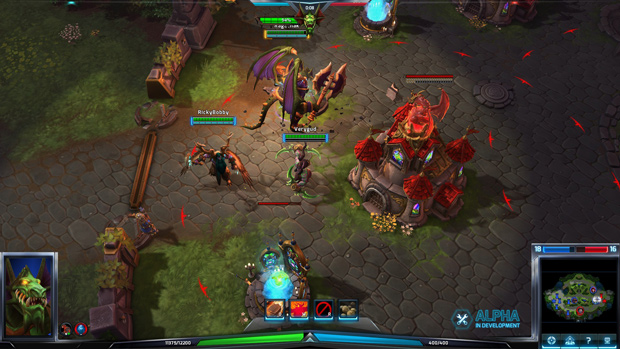 Players on the American server can use real money to purchase heroes, skins and mounts in the Alpha, and those who do are given a mount when the game goes live. They will also be reimbursed with in-game currency for what they spent. So while you do not get cash back, you can repurchase things you spent money on to begin with. There are several things to buy, none of which affect the actual game balance: champions, skins for that champion, and different color palettes for the skins themselves are up for grabs. Even the mounts themselves have purchasable skins, letting you decide between a cybernetic wolf and unicorn to further accentuate your MOBA individuality. 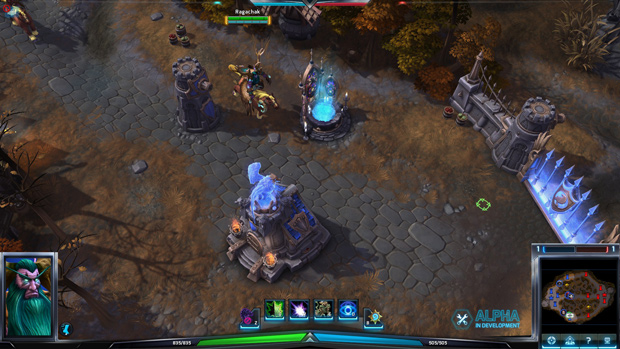 This is a game that challenges convention, with many differences between it and its sister-MOBA titles. Mounts are one obvious feature that do so. Hitting the “Z” key will mount you and give you more movement speed to get into the game. Some characters cannot use them, however. Sgt. Hammer the Siege Tank obviously cannot, nor can the Fairy Dragon Brightwing. The other mounts are purely cosmetic; all of them provide 40% movement speed, and cannot be used in combat. Taking damage will dismount you immediately. So far the only mounts I have seen are purchased in the shop, but there is nothing to say that will not change. 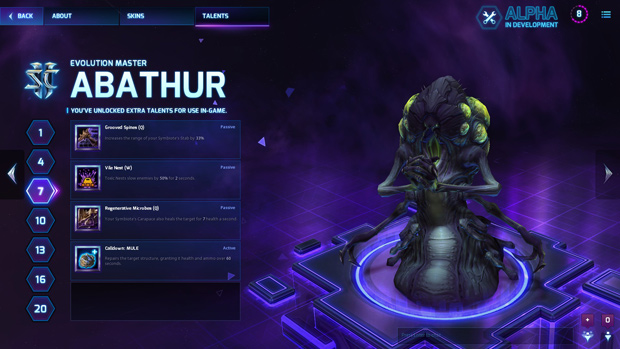 The biggest difference in Heroes as opposed to other MOBAs is the lack of item builds. You heard me: no Bloodthirster, no rushing Blade of the Ruined King, no Aganihm’s Scepter to buy. Traditionally you kill creeps, get gold, and buy items in the hopes of bumping your power levels up faster than your enemies to give your team a little sway should a fight not go exactly as you planned. However, killing minions in Heroes only gives exp, and all players on your team level at the same time. This is unique and, in many ways, terrific. You cannot fall behind your team, but the enemy team can still outlevel you. At certain levels your character is given choices of skills: active skills, passive traits, extra skills (such as a poison attack or a storm shield for all nearby allies), and ultimate attacks. You get two of those to choose from on each character for different situations. Your skills also get different options as the game progresses, such as Malfurion getting an option for increased area of effect on Moonfire, or choosing to lower the cooldown on multiple casts. 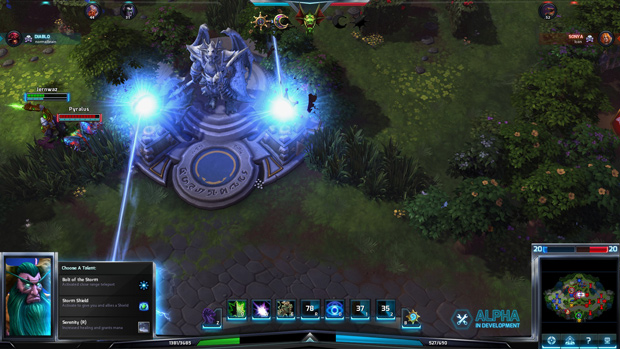 I have to say, the team leveling system is probably one of the greatest changes to me. The notion of not being outlevelled by my own team is terrific. When I play MOBAs, I tend to pick the support role, which typically suffers from gold and exp starvation in other MOBAs. No longer! The real strategy comes from picking the appropriate traits and powers to match the situation you are in. The entire game could revolve around picking or not picking a trait. Mercenary camps are also new and interesting. Instead of jungle camps, which just provide exp, these provide more attack power for your side of the game. These control points have a visible respawn time when used though, so be aware of when you need (or someone on your team) to be ready to reacquire these packs of monsters. 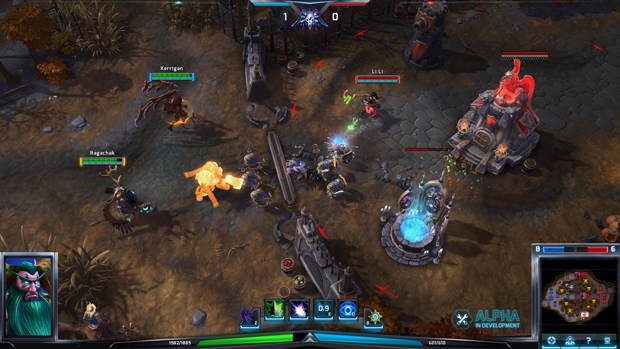 Come on. Did you really not see that coming somewhere? Heroes of the Storm, for a game in Technical Alpha, is a fantastic piece of work. There is a great deal of good going on here, with some new and exciting things. It is my sincere hope that it sees competitive play, something different and fun from the stagnant MOBA play we are seeing at this particular moment. It’s not all sunshine and lollipops, I fear.

There are a few terrible things that I would like to see fixed; luckily there is a great deal of time, and I hope other players point it out to Blizzard. The in-game chat is terrible, absolutely terrible. There is scarcely a chat box, and it fades off the screen rather fast. If there is a way to scroll back, I have yet to find it. This is not conducive to teamwork, since without voice chat, typed chat and map pinging are necessary. A MOBA without teamwork and communication is Bronze V on League of Legends.

In addition, you have no idea what will be on your team in random matches. This is good and bad; mostly bad, though. A large part of this style of game is strategy, team-building, and communication. If I cannot see what my team wants to play, how am I going to pick something to complement them? With this in mind, your opposing team might be better equipped for combat and victory, and you might get multiples of a type of character that you simply only need one of. I imagine this will be something that changes, but for the interim, it could make gameplay unpleasant to say the least. I feared Heroes of the Storm would simply be a fanservice money-sink by Blizzard, but there is a great deal of quality work to experience. While there is more to come, I am positive in thinking that this will be a big mover and shaker in the MOBA community.