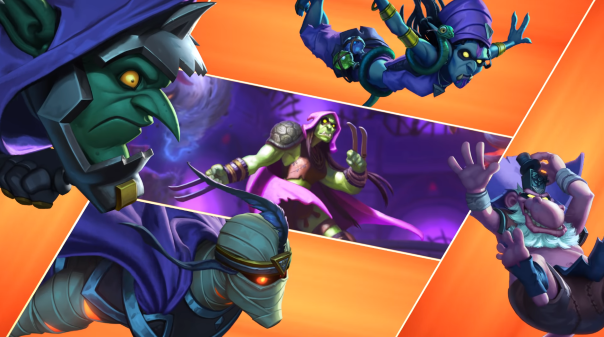 Now that the vault has been looted, the Violet Hold’s prisoners run amok, Dalaran is a chaotic mess in Hearthstone. The final stage of the League of E.V.I.L.’s plan is taking hold – claiming the entire city for themselves. There are just a few more loose ends to tie up. Chapter IV: The Underbelly is now live, and with it comes all kinds of oozes, jellies, gasses, liquids, and slimes. Keep the creepy crawlies of The Underbelly busy long enough for Blastmaster Boom to strap his definitely safe and thoroughly tested rockets to the magical city.

But who is taking part in this battle? Pandaren Warrior and black-market bodyguard Mr. Chu has a notoriously powerful right hook, so you’d better watch what you say about his choice of hairstyle. There is also Squeamlish, the rare Kobold Druid, some of those forms include rat, turtle, and hedgehog. As with the other Dalaran Heist Anti-Heroes, Mr. Chu and Squeamlish will also have to complete unique challenges in order to unlock two new Hero Powers each, and best bosses to bolster their starting deck options.