Hearthstone Announces a Way to Win up to 3,000 Card Packs/Introduces a New Bundle 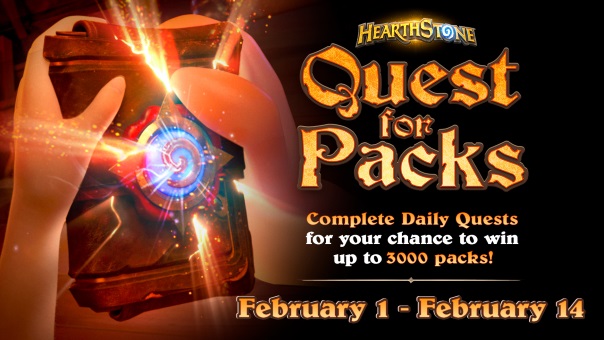 Hearthstone is introducing a new limited-time bundle to celebrate the Year of the Mammoth! The Mammoth Bundle contains 10 packs from each expansion released during the Year of the Mammoth (Journey to Un’Goro, Knights of the Frozen Throne, and Kobolds & Catacombs). That’s 30 packs in total! Now, one last legendary quest remains in the Year of the Mammoth. There’s also a gigantic, dare I say, Mammoth sweepstakes from Blizzard: The Quest for the Packs Sweepstakes! It starts at 9 am February 1st and lasts until 9 pm on February 14th. All you have to do is complete one Hearthstone Daily Quest and it will automatically be entered (limited to one entry per day). One grand prize winner will receive the following:

·         3,000 Hearthstone Card Packs – That’s 1,000 packs from each expansion released during the Year of the Mammoth: Journey to Un’Goro, Knights of the Frozen Throne, and Kobolds & Catacombs.

·         The Lich King’s Helm – They found it in his desk after his internship ended. Now they’re passing it on to you! Yes, the very same helm worn by the Lich King as he stalked the halls of Blizzard Entertainment could be yours!

·         Hearthstone Apparel Gift Pack – When the crown of the Grand Prize Winner grows too heavy, try this t-shirt, cap, and pin on for size!

Yes, that’s 3,000 Hearthstone card packs. With that, you’ll be ready to tackle any challenge that comes your way. 1,000 players will also receive a Mammoth Card Bundle, and 50,000 players will receive 3 card packs (one from each expansion).  Full details/rules can be found in the link below.