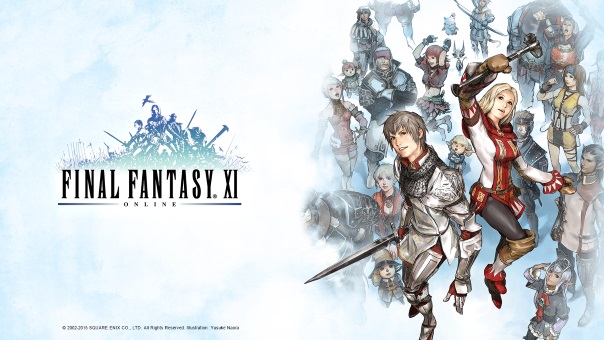 Good morning, Internet! The Long Look Back is going to be a series we work on here on MMOHuts where we take a look back at MMOs of yore, what they brought to the genre, their lasting impressions on the writer and any particular memories of that particular game. One of the MMOs that I spent time with first was Final Fantasy XI. There were games before it, EverQuest, various MUDs, World of Warcraft, but this was the era before Free-to-Play MMOs were a common thing one might find. MUDs were typically free, but that was just about it. Final Fantasy XI’s servers are still going strong, and there are still rumblings and whispers of the mobile version. It’s fascinating to think of such a ground-breaking MMO, that was confined to the Playstation 2 and PC (later to Xbox 360), coming to mobile phones, even in 2019. It featured five expansions, and several more Add-on scenarios/battlefields. So let’s go back to Vana’diel!

A Promise of a New World:

The Final Fantasy tropes are all very clear and easy to spot. You have magical crystals, a team of heroes, and a clear villain out to destroy reality/the world/go to the moon. When I heard there was going to be a Final Fantasy MMO, my immediate thought was “Will you always have to be in a party?”  and to Square (later Square-Enix)’s credit, they did keep that same Final Fantasy feel, even in an MMO. It felt like Final Fantasy Tactics but in a more open, real-time world. Up until this point in time, you couldn’t change classes in an MMORPG. You were stuck with what you had unless you made a new character. Vana’diel was a world we had never seen before. World of Warcraft would ultimately be set in the world of Azeroth, of the Warcraft PC line. EverQuest was a new world too, but nothing was quite as ambitious as Final Fantasy XI. I was already a life-long Final Fantasy fan, so the thought of being able to play online blew my mind. I was ready for it!

Holding true to the Final Fantasy franchise’s tropes, you had the evil Shadow Lord who was resurrected. The three major nations, San d’Oria, Bastok and Windurst were banding together to do battle, and we needed a group of heroes willing to fight. I have always preferred MMOs where you are not the only “Child of Prophecy”. When there are a million people all playing the same game, which is the real Legendary Hero? That’s one thing that’s kept me from really enjoying MMOs like Star Wars: The Old Republic. There were new races (and new takes on old races), and most importantly, more than four or five classes! You had the basic jobs and advanced jobs, which required a challenging quest-chain to unlock. Many of the spells and abilities also had quest-chains, and there was not a whole lot of info going around in the early days. Here are the original launch jobs:

There were more added in Rise of Zilart, Treasures of Aht Urghan, Wings of the Goddess, and Seekers of Adoulin. The concept of unlocking new jobs and earning them was foreign until Final Fantasy XI, as far as I could think.

For these, I did breach into Wikipedia Territory. In 2002, Final Fantasy XI came out of the gates swinging, winning awards in Japan and winning over critics in America. It was awarded the grand prize from Japan’s “Consumer Entertainment Software Association”, was Gamespy’s MMORPG of the Year, and IGN’s Game of the Month in March. This was not an MMO to take lightly, and though it had a fairly high barrier of entry in terms of challenge, it was rallying people together to play Final Fantasy online as a group of friends. Though you did have to have the Playstation 2 HDD and Network Adapter, this was the defining cross-platform MMORPG. One of my closest friends in that time period played exclusively on Playstation 2. I still remember him bringing it over to my place and showing off his Galka, who primarily was a Samurai and Dark Knight. Another ground-breaker was the translation system. All of the key terms, phrases, and even greetings had a Translation System. You could go through the key phrases to find what you needed to say, and no matter what language the other person read, it would translate for them. The servers were not based on region, so the need for translation was high.

This was also the first MMO that I can think of outside of MUDs that allowed for multi-classing. Not only that, you could level every class in the game on one character if that was your desire. This system was refined in Final Fantasy XIV, but XI was the originator. As you leveled, completed class quests and grew in strength, you could challenge for other classes, even if they did not fit what your race was “good” at. Once you hit level 30 in a job, you could work towards Advanced Jobs. This multi-classing did not really let you use all of the powers of the second class. It was known as the “Support Job” system. You could have a secondary job at up to half the level of your primary equipped job. You could use any of the traits, passives, and abilities for that job, excluding the major One-Hour Cooldown powers. This is what made Final Fantasy XI stand out as if the Job System did not already do that. There are simply so many class combo possibilities. Want to be a Samurai Dark Knight? Do it! Red Mage/Ninja? That’s what I did!

Final Fantasy XI was truly in a class all its own, but there were some problems that could make the game borderline unplayable. The most important one is the grouping. Once you were about 10-15, it was time to start heading into areas that required grouping, even just to grind mobs for EXP. In order to do even the most minor content, you had to party, and that meant yelling in area chats that you were looking for a party and then hoping for the best. If you did not have a Linkshell (basically a group/clan) of people to rely on, you weren’t really going anywhere. It was imperative that you had friends in this world, and this was one of the major blocks for me. All of my friends were playing other MMOs, or not playing them at all. If they were playing Final Fantasy XI, there was no cross-server functionality, and we were clearly on different servers. That technology came later for games like World of Warcraft and Final Fantasy XIV, but grouping is an absolute must in Final Fantasy XI. Those days are gone now, with the ability to have NPC followers that help you out, but that came again, far too late.

Important to any character in an MMO is equipment. You need the current gear, and you also need rare items to supplement these. Final Fantasy XI’s answer to a crafting system was called “Synthesis” and it was the most confusing, cluttered, confusing nonsense to ever grace an MMO. You needed to know what items to combine, you needed to know what type of Elemental Crystal you needed, and you also received a bonus if it were the right day of the week. There were rumors that it also helped to be facing the right direction, and to be on the right phase of the moon, but I’m not really clear on how true those statements are. But it was a complex, frustrating system. Farming rare items was also a nightmare because you needed a group, and you had to figure out who was going to get them in what order, if they dropped at all, then there’s the long respawn times and having to trust people in an online game. Then there’s the nature of leveling up. When you die, you lose EXP. This could cause you to de-level, should you be too low in one job’s levels. Nothing in an MMO that I’ve experienced thus far is as demoralizing as de-leveling, and not being able to do the content I need to do without grinding again.

The Legacy of the Fantasy:

Few MMOs really tried what Final Fantasy XI set down in the world. It’s such a wild concept to this day to see multi-classing in MMOs. But it showed other companies and players that you didn’t need to just stick to the established standard classes. You could create challenges, force people to group, and hopefully make long-lasting friendships. Jobs, Advanced Jobs, a lot of this stuff came from previous Final Fantasy games, but it did not utilize quite as much of the previous games for a signal boost or a bit of nostalgia. That changed in Final Fantasy XIV though. Final Fantasy XIV feels like a true successor to XI, and though the Support Job system is gone, you can still do everything on one character. They refined the crafting systems as their own individual classes that make far more sense, though Final Fantasy XIV had its own rocky start. One of the major things I criticized ESO about, they could have learned from Final Fantasy XI. FFXI did not strive to be some new thing in the Final Fantasy world.

It didn’t try to be a generic Western/Eastern MMORPG – it was a Final Fantasy game, with MMORPG mechanics. That’s what ESO should have done – it should have been an ESO title, not a bland, generic Western MMORPG. Ultimately, I think Final Fantasy XI broke the mold more than any other MMO before or after. It was brutal, it was confusing. Often challenging and very frequently it made me want to tear my hair out. They had absolutely dreadful Customer Support, and if for any reason you lost your login info/account credentials, you were never getting back into it again (or so my experience was). When I left Final Fantasy XI behind, I uninstalled their dreadful program, only to find I couldn’t cancel my subscription as I had lost all of my data. Final Fantasy XI broke a lot of ground and tried a lot of new things that we in the West had never seen before.  Though it’s years old, I still would recommend people go back and give it a try again. I did, just a few months back with my friend Biral. If I could get more folks to play again I might subscribe once more to tackle all the content I missed out on.