Heroes of the Storm: Valeera Hero in Review 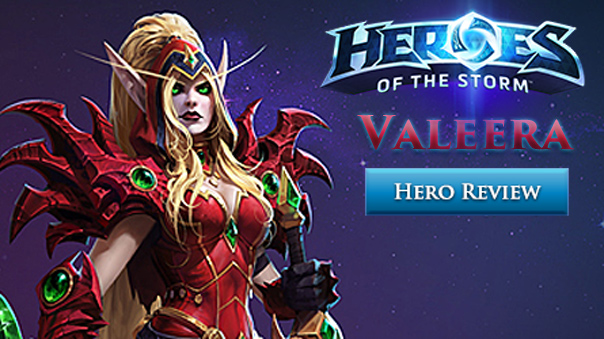 The idea of jumping in and out of battle has always been very appealing to me. Anyone that has played games with me in the past can attest to my play style of staying far from danger. This is typically why I love ranged combat and avoid melee fighters or tanks. However, even melee combat can be a lot of fun when coupled with some interesting and fun movement capabilities. Valeera, Shadow of the Uncrowned, joins the Nexus from the Warcraft universe. I’ve never had this much fun with a hero in Heroes of the Storm, and perhaps in any MOBA for a very long time. Read on to learn more about Valeera, Shadow of the Uncrowned.

The gladiator Valeera Sanguinar served as one of Varian Wrynn’s personal body guards. Even while serving Varian, she maintained her independence. She identifies herself as a blood elf but maintains that her loyalties are person, to her friends and her ideals. Valeera plays as an assassin, rogue from Warcraft, with the ability to jump in and out of stealth and stock up on combo points which can be used to deal massive damage.

Valeera plays around Vanish, her passive ability, which allows her to go into stealth and move around the map quickly. During the first second of stealth, she can walk through units making it great to get out of a bind. While in stealth, she unlocks a different set of abilities to combat her enemies. Her first ability, Sinister Strike, causes Valeera to dash forward and hit all enemies in a line. If a hero is hit, the dash immediately stops and the cooldown is reduced to one second. Sinister Strike is great in both offensive and defensive situations. While the five second cooldown is great when clearing waves, or running from danger, the one second cooldown when a hero is hit makes it perfect for closing the distance between you and an unfortunate enemy.

Like all her abilities, Sinister Strike grants one combo point if a hero is hit. Blade Flurry, her second ability, is special as it hits all enemies in an area and grants a combo point for each enemy hero hit. These combo points can be consumed with Eviscerate, her third ability, to deal damage based on the number of combo points consumed. You can stock up on a maximum of three combo points at a time and these combo points, as the name implies, expire if you are out of combat for too long.

Don’t be afraid to fight, Vanish can aid in your escape

While in stealth, all her abilities change to those more suitable for taking enemies by surprise. Sinister Strike becomes Ambush which deals heavy damage to a single enemy, Blade Flurry becomes Cheap Shot which stuns and damages an enemy, and Eviscerate becomes Garrote which silences and deals damages over time to an enemy. All three of these abilities are situational and depend on the hero you are targeting during your gank. Cheap Shot is great as it stuns enemies, but it does not deal as much damage. I have found that a lot of the time Garrote works great as the silence inhibits the enemy’s ability to escape whlie dealing a decent chunk of damage. Ambush is great when damage is all you need and your team is there to provide additional support and crowd control.

As far as Heroic abilities are concerned, you have the choice between Smoke Bomb and Cloak of Shadows. With your Smoke Bomb, you can create a cloud of smoke causing Valeera to be unrevealable, can pass through units, gain 25 armor, and reduce damage taken by 25%. This is an amazing ability to catch enemies by surprise and continue to chip away at their health without the fear of the enemy team killing you. It is also a great ability to escape when you are caught in a difficult situation.

Alternatively, Cloak of Shadows may be employed to immediately remove all DoT effects and become unstoppable AND gain 75 spell armor, reducing ability damage taken by 75%, for one second. This may seem like a short period but it is a great ability to dodge large nukes such as Kael’thas’ fireball. I find myself picking Smoke Bomb 99% of the time but Cloak of Shadows does have its place.

Unlike other heroes, Valeera does not make use of mana points. Instead, she relies on energy for her abilities. This will be very familiar to those that have played World of Warcraft but is easy to get used to even for those unfamiliar with the game. Energy is capped at 100 points and regenerates over time. Unlike mana, you cannot just blow your entire arsenal when you have a large mana pool. Instead, the energy system makes you consider which abilities to prioritize as it is not possible to use all abilities off cooldown without running out of energy. This makes it important to have a combo in mind before jumping on an enemy – you don’t want to be mashing buttons without having enough energy! I highly recommend picking up the talents which improve your energy regeneration and decrease the cost of abilities such as Sinister Strike.

Smoke Screen is great for both offense and defense

One important point to keep in mind is that Heroes of the Storm does not have the idea of complete invisibility. You are always able to see a faint outline of invisible heroes – something I forgot after being out of the game for many weeks. So, while you can sneak up on enemies, don’t hang around waiting for the perfect opportunity to pounce; chances are the enemy will notice this weird outline around them. Instead, always be on your toes and move around (even making use of the bushes) to lower the chances of enemies taking note of your position. If you take damage, your invisibility will disappear.

Overall, Valeera is a quite strong hero. It has been a very long time since I truly enjoyed playing someone this much. It was a lot of fun jumping in and out of battle with vanish and slipping away with very low health points remaining. Her playstyle may not suit everyone, but I’m a huge fan of kiting and jumping in and out of battle. This makes Valeera the perfect hero for me as I’m able to annoy my enemies with her arsenal of abilities.

It may just have been the fact that I could finally sit down and play something for fun after weeks of studying, but I had a blast playing Valeera for this article. As always, I look forward to seeing what else is in store for HoTS!