Everquest Next & The Holy Grails 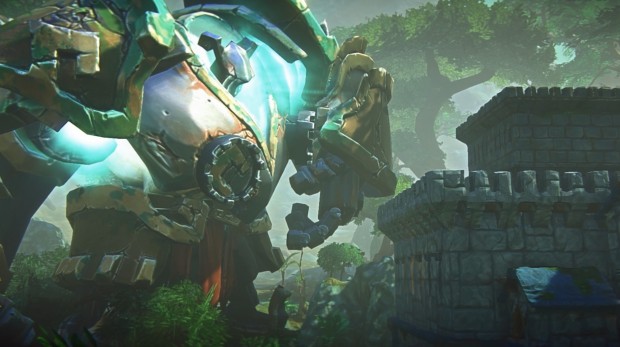 Today marks the day the EverQuest developers and the entire team at SOE can stop burying their excitement about the highly anticipated EverQuest Next, a game they say will reset the way MMORPGs work… again!

Dave Georgeson, Director of Development for EQ, EQII, and now EQNext explained how EverQuest Next has been in development since 2009. The game had been scrapped two times, the first scrap was because they felt like, “Once again we are remaking our same game, using our own original template.” They decided they need a fresh start but still incorporate all of the passion, lore, and feeling of Norath, into something similar to what J.J. Abrams did with Star Trek that will provide players with EQ nostalgia but with new stories, player driven stories. “EverQuest Next is not the continuation of a familiar story. It represents the fundamental reimagining of the characters, lore and environments of the EverQuest universe,” said Georgeson

Yeah sure, every MMORPG wants to be the grand master so you’re probably wondering, “What makes them think they can be any different than anyone else?” Well that’s where Georgeson’s Holy Grails come into play and put a better understanding on why it’s called EverQuest Next instead of EQIII. 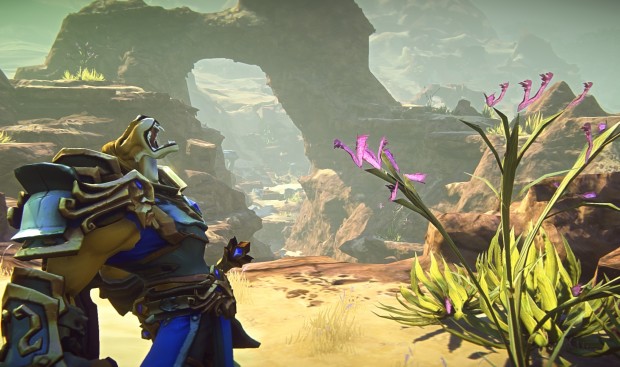 The first Holy Grail will offer players complete freedom of play style through Multi – Classing where players start with a distinct class (over 40 at launch) and change that class into a more individualized version through specialized weapon skills and multi-tiered abilities. Each of the characters abilities change based around the weapon of choice and even tweaks to those weapons via crafting.

This first Grail ties into the next Grail, A Life of Consequence. This grail has a lot to do with the sand box aspect, (reminds me of ArcheAge). Players will not follow a pre-determined path as their characters but instead seek adventure as they wish. (Players might approach an NPC out of curiosity for quests) This system tracks the choices and actions made by the players and naturally continues to reintroduce opportunities back onto the player. For example if you like building walls and the game can see that, well you might expect you needing to repair walls in an epic battle a few months down the road.

This next one is a big one, something we haven’t seen in an MMORPG before and that’s 100% Destructible Environments. Using a deeply modified version of the Forgelight Engine (same as PlanetSide 2) they’ve made the world entirely out of tiny blocks called Voxels that not only make the world really unique from a creative aspect (we’ll talk more about that later) but lets everything be destroyed. The best part about this is players have the abilities to literally tear the place to bits, creating huge holes, (imagine TNT in MineCraft) break down walls, and even use several abilities to create structures (physical ice walls as example, ones that enemies have to use abilities to break through). 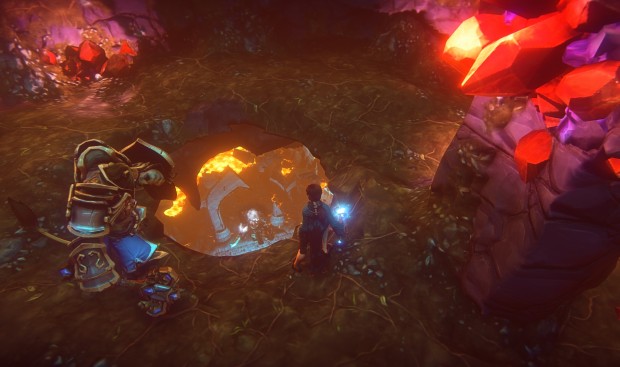 On top of the destructible environments you have another element in the game that moves away from the single surface areas and allows for a truly layered game world, and what I mean by that is you may be fighting an enemy and come across and area with a thin layer of ground and fall through that layer only to land in a subterranean environment or you might have the urge to explore and pick up a pickax and start exploring only to find several huge caverns to explore. (Again think exploring in minecraft, even the randomly generated worlds part).

This next Grail is my absolute favorite aspect of the game so far (It’s the epic within the awesome) this is a completely new approach on PVE AI, called Emergent AI. This completely eliminates the need for spawn camps and players knowing exactly where NPCs (enemies included) will be in the world. The do this by constantly polling the world and tagging everything in the world for what it is (Sorta like putting tags in a YouTube video). Then all of the creatures and NPCs have special interests, likes, dislikes, etc. that coincide with the tags in the environment. Example: Orcs may have specific likes and dislikes, they may like to camp alongside roads were they know that only a few adventurers travel and are looking for their gold. They don’t like cities due to the guards, and they don’t like highly populated areas where they get their faces smashed in constantly. Well what this means is, these creatures get introduced into the world and they go out and find areas that they like and fit their needs. Their likes and needs maybe right next door to your village or it might be somewhere you’re not. If these various creatures are becoming a threat or problem it’s up to player to find means of pushing them away by changing the area so that these intruders no longer like the area they’re in. Hence they pick up camp and find a new area they like. This creates an AI environment where players have a much harder time predicting what they may face next.

The final Holy Grail is, from what I can assume, developmentally scary. This one is none other than Permanent Change. This gives players a world where they can influence, literally, permanent change in the world around them and in very dramatic and dynamic ways. Screw just having dynamic events, based on this concept they want the dynamic events to forever make an impact on the world and players experience forever. To do this the setup rallying calls that may have players setup a camp, as an example (similar to public quests, just to start things off, but the rally call may take months to complete) hundreds to thousands of quest opportunities present themselves during these rally call because on event might trigger another or one event may start another. This is a little hard to explain without direct examples but it’s designed to create numerous dynamic quest opportunities that have permanent change on the world. (Hopefully I’ll be able to explain this better as I learn more).

So that’s the fundamental elements that make up EverQuest next but there is more… a lot more. After the development team worked with the very elaborate, yet intuitive tools to make the environments in EverQuest Next, they decided why not give these tools to the players so that they could truly help make the game they want to play. Well they did just that with EverQuest Next Landmark, a new title we can expect to see by the end of this year that lets player build on plots with specific biomes, collecting resources similar to Minecraft and make amazing structures that plan to be incorporated into the launch of EQNext and going forward. 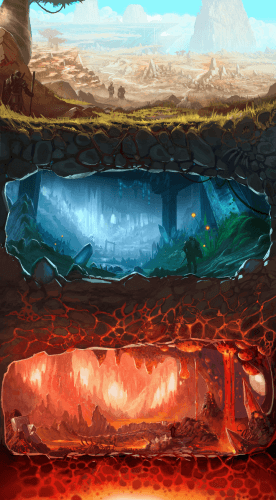 Dig deep enough and you're in hell. Happy Adventures!

Not only will players be able to create their original content for the game but the developers will direct players into building what they need help building. Just like CEO John Smedley said last year with Player Studio, “You guys can design some assets even better than we can!” Just like Player Studio, if creations by players get submitted they receive a cut of the revenue made off that item but in this case, for example, if someone makes a tower and someone else comes along and makes a castle out of 8 of those towers, that tower creator gets loyalties based on a percentage that the tower was used in the castle. And yeah, this may be a way of having the players do all the work for them, but I suppose the healthy way of looking at it is, these guys are dedicated and that only tells me that it will allow them to focus on all the new features that truly make the game unique.

I know I only touched on this overwhelming title briefly, there is so much more to know and ask, all in all the game has some very interesting elements that spark a warm feeling inside for modern MMORPGs so we defiantly have something worth the wait so far and a huge new contender for the Next generation of MMORPGs.